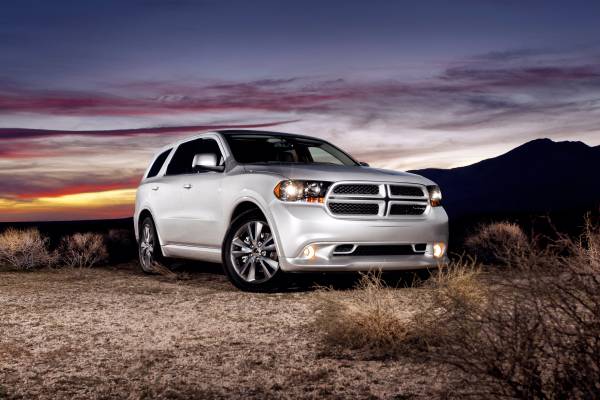 As much as we’d all like to believe that the trail-riding, rock-hopping, parked-in-the-pine-needles-down-by-some-deserted-lake image of “sport utility vehicles” we used to hold wasn’t firmly in the rearview mirror, reality seems destined to prove the contrary. In fact, typing out “sport utility vehicle” made me realize how long it’s been since I’ve even heard the term. The class has evolved, and at the same time spawned enough of its own orders, families, genera and species to muddy our roads with so many two-box designs that the notion of buying a sedan or coupe seems almost quaint by comparison. The common vernacular now points to “crossover” or “CUV” being the de rigeur label we associate with pavement-bound mall-roaders, and beyond that lies any number of different marketing terms fabricated by the automakers to splash up their wares.

Perhaps it’s a sign of just how weak-willed I am, but truthfully, spending only a short amount of time with a sampling of the current crossover market was enough to dissuade me from wistfully longing for the body-on-frame, rough-riding, cheaply built and turned out en-masse SUVs of my youth. Over the coming days, I’ll delve into a small portion of the diverse crop of current trucklets, explaining that just maybe, being limited to the terrain Uncle Sam was kind enough to pave isn’t so bad after all. 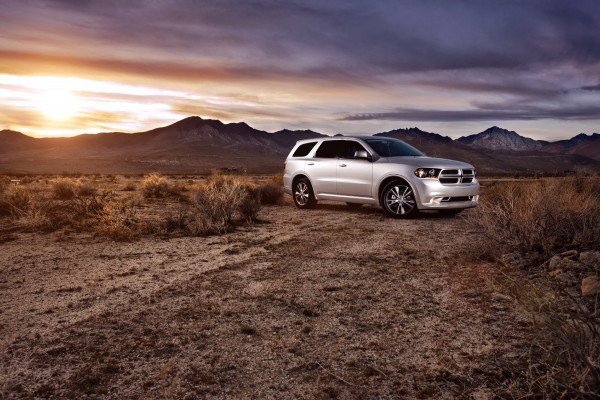 If you’re the cynical type, you might have lumped the original Durango into that rough-riding, body-on-frame group I described above. I have fonder memories – I vividly remember its bold styling and swaggering attitude when it came onto the scene in 1997. It didn’t look anything like the other $30-something SUVs that were all the rage back then. But being way late to the party didn’t keep Chrysler from trying to make an entrance. Much like the Dakota pickup it was based on, the Durango refused to follow established automotive conventions like size and class. Pegged as a mid-size SUV, it offered far more room (enough for up to 8 passengers) than its smaller, but similarly-priced, rivals like the Ford Explorer and Toyota 4Runner. It featured a standard V8 engine where one was merely optional or altogether unavailable on rivals. And paired with a standard four-wheel drive system, the ‘rango could tow nearly 9,000 pounds if you felt like it. It had all the baked-in truck attitude a housewife could ever want.

The intervening years weren’t kind to the Durango, though, as gas prices climbed and Chrysler’s ownership woes became more and more precipitous. Eventually in late 2008 it was killed off, along with its Chrysler Aspen stablemate. After a three-year hiatus, a resurgent Chrysler under Fiat ownership brought an excellent new Jeep Grand Cherokee unibody platform to market, as well as a new Durango with which to share it. Derived from the third-generation Mercedes ML and wearing crisp new sheetmetal, the Durango premiered as a 2011 model with a Pentastar V6 or optional Hemi V8 under the hood. A refreshed 2014 model was just revealed in New York last month, featuring light fascia reskinnings, an updated interior and some new mechanicals, but we got our hands on a 2013 R/T model to see just how good this latest Durango was in the first place.

The nice thing about the Durango from a driver’s perspective, and a relative anomaly in its class, is the fact that it’s based on a RWD chassis. AWD is available on the R/T as well, but our tester was rear-driven, giving us a chance to see just how far Dodge’s (or perhaps Mercedes-Benz’s?) engineers had gone into making the Durango a convincingly car-based utility vehicle. Based on a couple hundred miles of on-road experience, we’d say that platform choice was a slam-dunk – the Durango turns-in and holds a line like no two-and-a-half ton beast ought to. After you get over some initial trepidation about approaching the cornering limits from such a high vantage point, you quickly realize the center of gravity is much lower than perceived, as body roll is kept well in-check despite a glassy-smooth ride. That’s right, I said “glassy-smooth”. It’s rare to find a manufacturer of late that doesn’t try to dial in a touch of perceived sportiness (i.e. actual crashiness) for the sake of pandering to another buyer set. We’re glad Chrysler restrained themselves in this instance, because the Durango truly rides like a luxury car up a few classes. Barring an occasional thwack from the R/T’s standard-issue 20” Goodyears, it’s a very quiet ride as well. 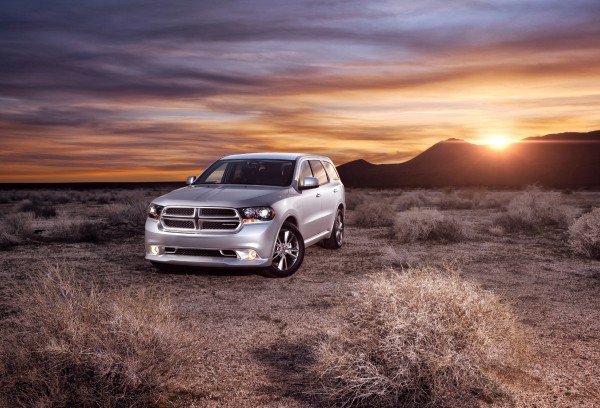 Quiet, that is, until you open the taps on the Hemi V8. The induction howl cancels out any semblance of exhaust burble, probably not helped by the fact that the exhaust pipes exit so far rearward relative to where you’re sitting. The Durango is a large vehicle at nearly 200 inches in length and 5,200 pounds at the curb, but on the move it rarely feels it. Unless you’re really dogging it, that is. The Hemi has enough brawn down low in its torque curve to move smartly away from a light, but truthfully the 5.7-liter is a revver, perking up noticeably at 3,000 rpm and generating a real rush to redline thereafter. The 6-speed automatic is the dancer that’s behind a few steps in this partnership, unfortunately – in order to preserve some semblance of fuel economy, it’s programmed to get to 6th in as little time as possible, and once you’re rolling along at a decent clip it takes an almighty prod of the gas pedal to summon a kickdown. You’re likely to get a little more than you bargained for, in fact, often ending up in fourth or even third when fifth would have sufficed. Luckily, the 2014 refresh brings with it a new 8-speed automatic transmission, which should not only help restore some of the Hemi’s pluck but also improve on the 16 mpg combined mileage figure we saw during the Durango’s stay with us. That figure is in-line with what’s advertised on the tin, mind you, but it’s still a bitter pill to swallow for a vehicle that will likely end up serving commuter duty in some way, shape or form.

And what a commuter car it is. From your pillowy throne in the sky, hybrids and other discarded B-segment detritus seem to part like the Red Sea in your presence. It’s not an eco-friendly method of getting to work, this, but one sure can get used to it. And plowing through the tedium of the morning commute gives you an excellent chance to sample the Durango’s Uconnect 430N infotainment system, which – while good – it has to be said, isn’t as good as the system offered in Dodge’s lesser (but newer) Dart. Luckily, this will also be remedied in the 2014 refresh, as the 8.4-inch touchscreen with complementary hard buttons beneath becomes available on the Durango. 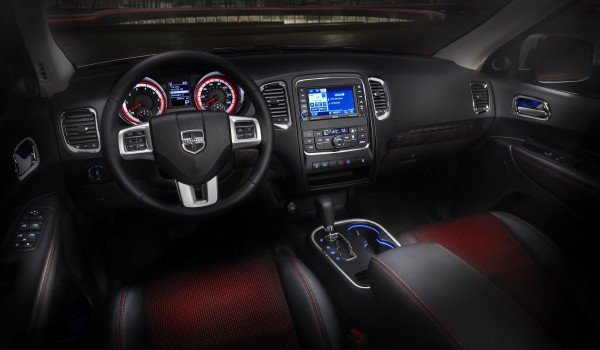 The Dodge’s heated and cooled seats, while devoid of lateral support, work commendably well and are otherwise very comfortable. Coupled with a relatively low beltline, their high mounts make outward visibility a non-issue. Our car had blind-spot monitoring and a backup camera just in case, worthy additions if you’re teaching a teenager how to drive, but honestly there were few instances where we felt the Durango’s considerable girth was unmanageable during parking maneuvers. 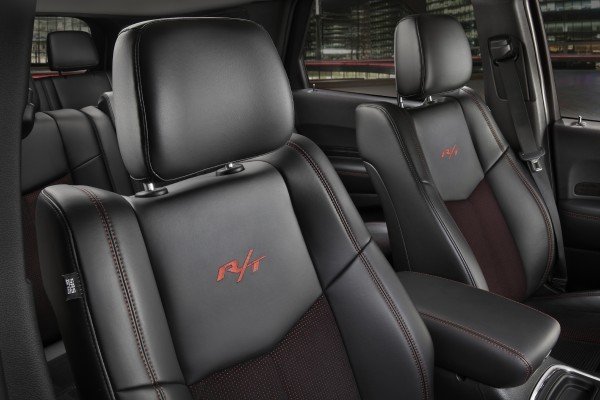 Now for the acid test – how many times during our week with the Durango did we daydream wistfully about the good old days, when SUVs could climb Mount Rainier for a family picnic without breaking a sweat? Exactly none. In fact, it had us checking our bank accounts to see if we could feasibly commute in it every day (we can’t). More than anything, the Durango proves that the car-based “crossover” has reached an evolutionary point where they may actually be more desirable than a comparable large sedan. No Avalon or Impala will seat eight, but there are plenty of minivans that encroach on the $43,160 sticker of our loaded-to-the-gills R/T tester, and for that money there’s definitely a case to be made for the three-row crossover. Especially one that looks this good and has the V8 swagger to back it up. 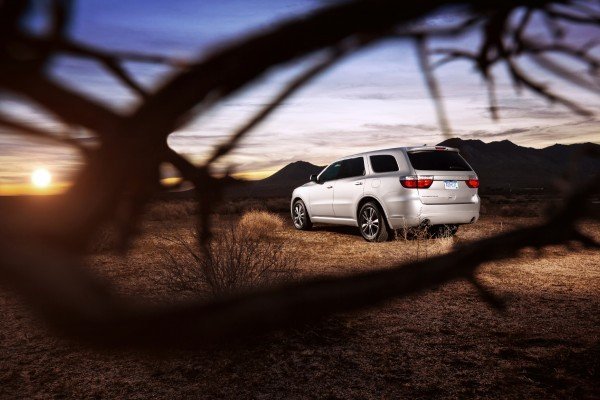 So, which Durango is the one to have? If you’re a technophobe and are satisfied with the 6-speed auto, stick with the 2013 and nab a healthy rebate. If it were our money, we’d be tempted by the 2014’s new transmission and tech gear, plus the snazzier wrap-around LED “track” taillights. We might also be swayed to the Citadel model’s slightly more upscale looks, although the R/T with its ground effects has a certain boy-racer charm all its own. Whatever the model, the Durango impressed us with its comfort, space and refinement, but really won us over with its car-like on road demeanor and Hemi V8.

Dodge provided the vehicle for testing purposes and one tank of gas. Photos by the manufacturer.