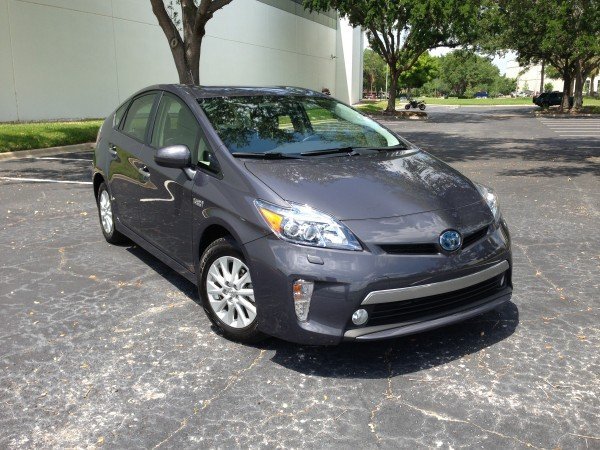 Since its introduction, Toyota’s Prius has strived to be many things to many drivers – from fleet workhorse for taxi operators, to buck-stretching commuter car for normal working slobs, to eco status symbol for the planet-savvy or those who just aspire to be. It’s amazing how many businesses have adopted such electric vehicles in their own fleets – As NYC Municipal Commits To Electric Fleet, Other Businesses Should Follow Suit and look into the benefits such as lower running costs and improved data. Now, with the Plug-in Hybrid model, the Prius aspires to be a Chevy Volt. Well, not really, but that’s the general concept: provide a full electric option for owners that have access to a wall plug, and a gasoline motor for everyone else. I spent a week with one to see how it fared in everyday commuting and city travel, and to see whether a plug-in hybrid is any use at all to a condo/apartment dweller without regular access to a garage wall outlet. I’ll preface this by once again reinforcing the fact that during my time with the Prius, I did not have access to a wall outlet to charge it. I did, however, stumble upon a local supermarket with an electric car charging station. In my metro area, charging stations aren’t all that prevalent, limited to about a dozen installed by the city and a few dozen more by privateers in select areas. Over seven days and 400 miles, I encountered exactly one. During the 25 minutes spent charging at this particular 240V source, I garnered 3.5 miles of electric-only driving; nearly enough to travel back from the market to home. If I wanted to make worthwhile of the electric facility of the car, I would definitely need to have a home EV charging station installed by a company like Aardvark Electric (aardvark-electric.com/electrical-services/electric-vehicle-chargers/). If I had to continue using public stations, I don’t think I’d see any benefit from the electric part of the car. 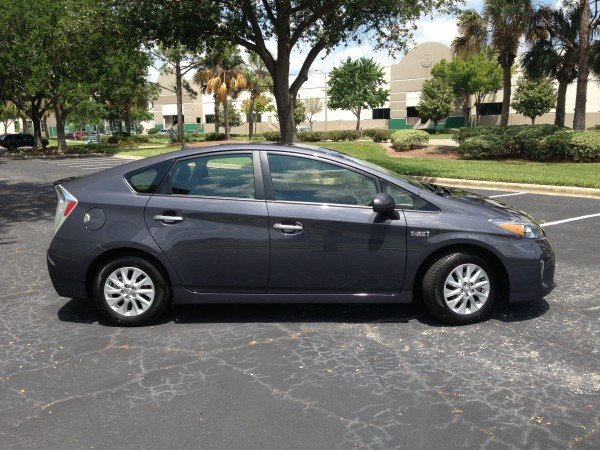 Using a 4.4 kW-hr lithium-ion battery pack as opposed to the 1.6 kW-hr nickel metal hydride unit on offer in the standard car, the Prius Plug-in charges quickly and depletes that charge even quicker. Standard 120V wall outlets will top off the Plug-in’s battery in around three hours, and on 240V that time is halved – a useful savings over the Volt’s four hour minimum on high-power, and 10-16 hours on 120V. A full battery in the Prius will take you 11 miles on electric-only power, but during those miles you’ll probably need to dip into the gasoline engine’s 98 horsepower on at least one occasion simply to get out of another driver’s way. Forward progress in an electric-only Prius is far from stately. But, if you can avoid crazed traffic, you’ll be whisked silently from village to dell in relative comfort. The air conditioning system has no trouble keeping the cabin cool in whichever drive mode you’re in, an important factoid if you live in a humid southern state like this author does. The Honda Free Hybrid has great cargo space and this car does too. This is great news if you have a family and therefore need a lot of space from a car. 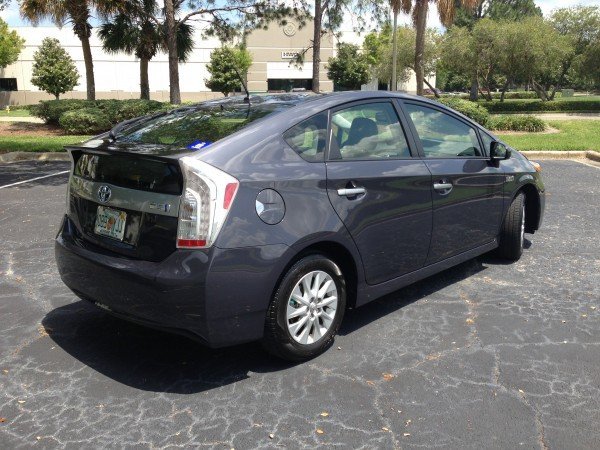 Our ‘Advanced’ package tester also came with a host of goodies seemingly designed to help you drain that battery power just a bit quicker – LED headlights, premium navigation with Entune, ?SofTex?? power heated pleather seats, radar cruise control, a collision warning system and a heads-up display are all included in the $7,525 package price tag. Couple that to an MSRP already inflated by $7,845 over a base Prius, and the Plug-in suddenly appears to be a very pricey way of shouting one’s eco-consciousness. 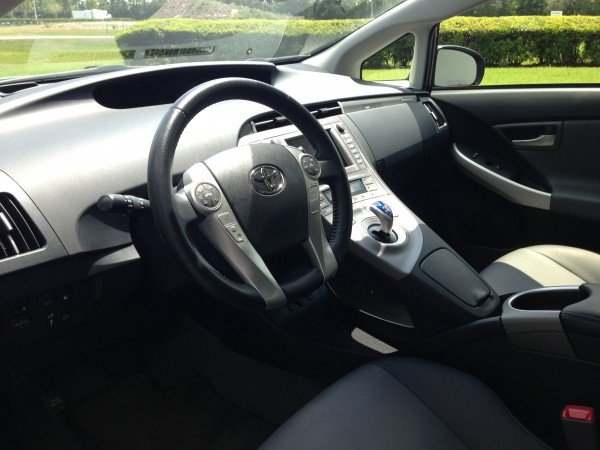 Especially when you consider that the Plug-in drives much like every other Prius ; it’s a fairly unobtrusive device that dissects the most basic aspect of driving – getting from point A to point B – and serves up exactly that function in the most efficient way possible. Far from being a hypermiler, I still averaged close to 50 mpg during the Prius’ week-long stay with me, and that was with just a single three-mile jaunt on wall-provided electric power. The rest of the time, the Prius was doing its thing with the battery, electric motor and gasoline engine to provide me with just enough ‘go’ to get me where I needed to be, and not a drop more. 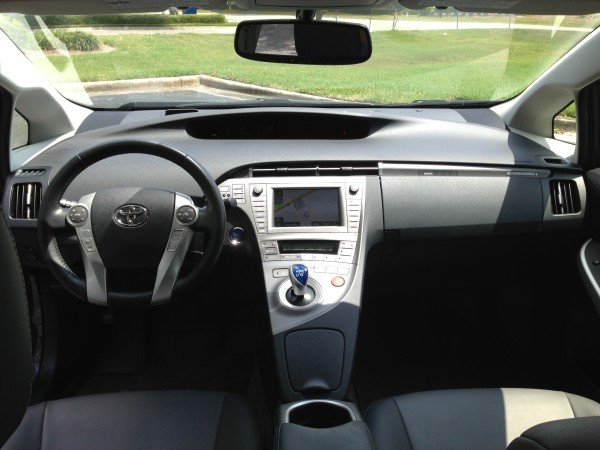 Now, for the enthusiast driving subset that frequents S:S:L, there’s not a lot of joy to be found in that last paragraph. But as we all know, the motoring public as a whole simply doesn’t care that much about lateral ?g and steering feedback, by a pretty vast majority. And if you look past its design roots as a vehicular appliance, you can still extract a modicum of real-car pleasure where you least expect it. Though wholly devoid of feel, the Prius has a pleasingly quick steering rack, and coupled with a fairly flat cornering attitude, it can make tight freeway off-ramps and decreasing radii corners honest points of interest – especially as you’re trying to balance the fine line between tire scrub and pure-electric power. Finding that delicate balance becomes its own reward after a few miles behind the Prius’ compact helm. The overwhelming sense I got during my week with the pricey Prius wasn’t one of cynicism – it was an understanding that for a select group of buyers, the Prius Plug-In actually makes a lot of sense. And truthfully, that rational mindset is the one the Prius as a brand has appealed to all along. Much like the cab operator, the budget-savvy commuter and the greeny fashionista, the urban dwellers whose commutes are often short and terminate with charging provisions at both ends will find the Prius Plug-in Hybrid to be the perfect complement to their lifestyle. It also provides all the upscale tech you could ever want in a wrapper that won’t raise any eyebrows – although other Prius drivers that haven’t yet acclimated to the plug-in concept might look on lustfully at the sight of your Prius tethered to a nearby wall.