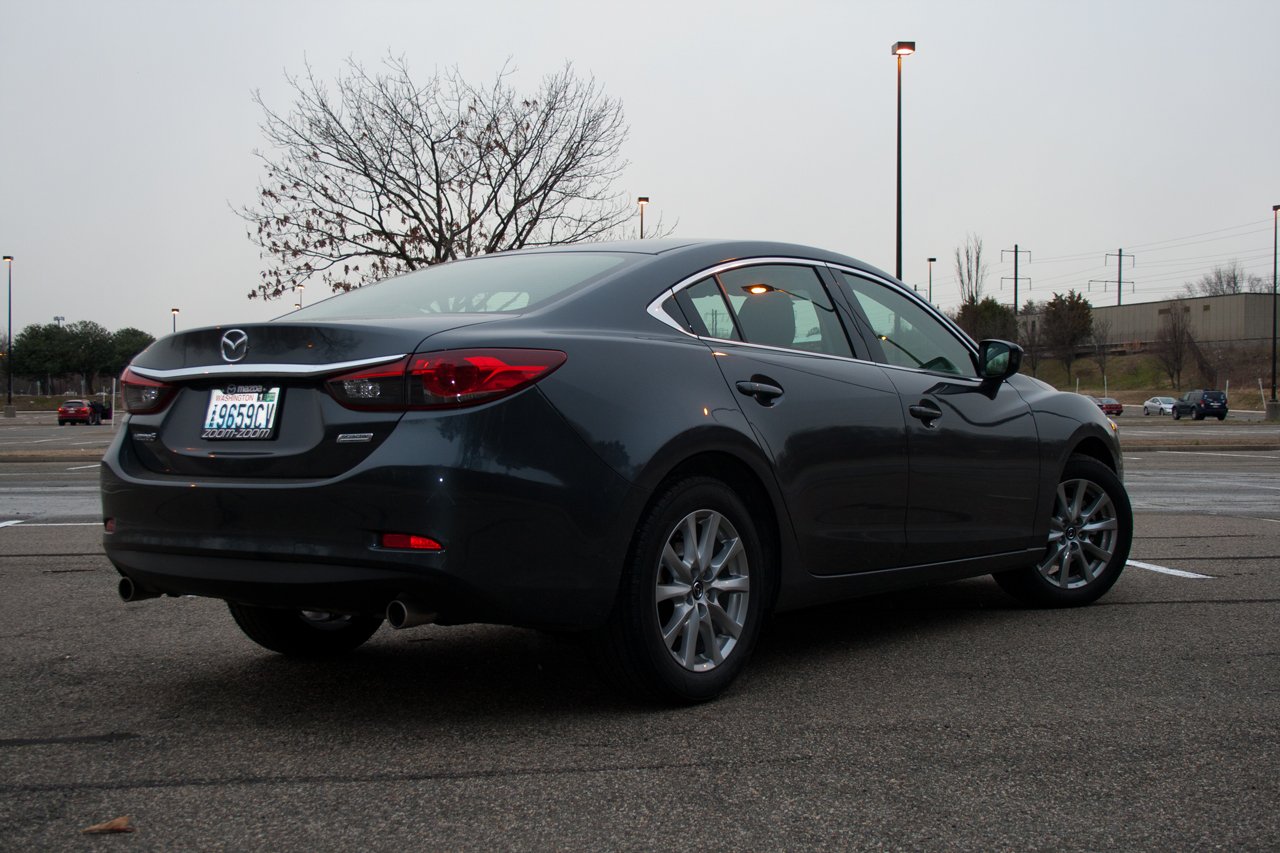 Thirty thousand units: it would represent a fantastic month for the Ford Fusion or Nissan Altima, but Mazda isn’t thinking in terms of months. That is the year-end sales goal for the 2014 Mazda6. Mazda sold 42,000 CX-5s in 2012—its abbreviated launch year—and more than 120,000 Mazda3s, but the number crunchers in Irvine are aiming for just 1.5% of what I’ve called the most important segment of the U.S. auto market, and one that represents more than two million sales in the United States each year.

But let’s look at that number in context. When the first-generation 6 debuted for 2003, Mazda managed to move 66,000 of them in its first full year (compare that to 413,000 Camrys sold in the same time period).  That number increased to just over 72,000 in 2004, the best-ever year for the nameplate, and then tapered off gradually until the first-generation car was phased out in 2008.

When the crew of an aircraft carrier commences flight operations, they turn the ship into the wind and throttle up, thus maximizing the airflow under the wings of the departing aircraft as they’re catapulted from the massive steel deck. Mazda attempted something similar with the introduction of the overhauled Mazda6—going for broke on an updated, U.S.-specific chassis and launching it headlong into the hurricane-force gale that was the economic collapse of 2008-2009. A great strategy for Super Hornets, as it turns out, that doesn’t quite work for family sedans, as the overhauled 6 clawed its way to a meager 35,000 sales in its strongest year.

In that context, 30,000 units doesn’t seem an unreasonably low starting point. And fortunately, the new 6 is every bit as sharp as the car that first bore the name.  Like the first-generation car, the 2014 is again a “world” model, but as was the case with the outgoing generation, we won’t get anything but the sedan here in the States; the sexy wagon will only be sold overseas.

It’s a shame, for sure, but given Mazda’s financial situation (they’re just flirting with profitability for the first time since parting ways with Ford), it’s not unexpected. The wagon made up single-digit percentages of the first generation’s sales volume and given the extra training, supply chain and inventory costs of selling an additional body style in the U.S., it just doesn’t make sense for Mazda right now.

Speaking of single-digit sales percentages, let’s talk about diesel. Mazda’s SKYACTIV-D engine will be available in the 6 in Touring and Grand Touring trims starting later this year. However, according to Mazda6/Mazda3 program manager David Dildy, it will not be offered with a manual transmission for the foreseeable future. The only group faring worse than diesel fans? V6 fans. There won’t be one of those available anywhere. 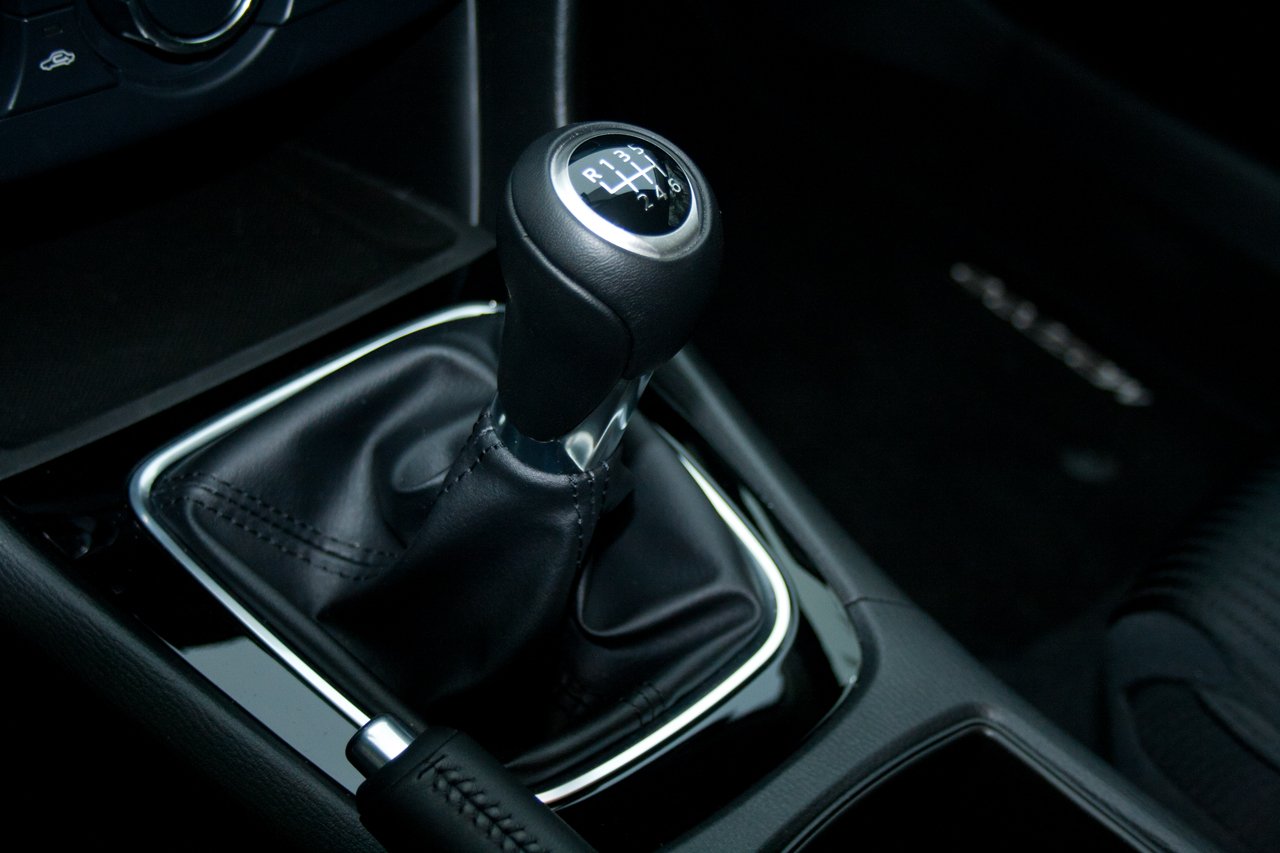 Our tester was a Sport-trimmed model in Meteor Gray equipped with, well, very little, actually. The manual transmission was only available on the Sport at launch, but will be found on Touring models shortly (and may even be available by the time you read this). For those who crave simplicity, the lack of baked-in extras at this trim level may seem a boon, however I must say that Mazda really needs to step up and offer Bluetooth as a standard feature. Who needs hands-free phone options more than a buyer with a stick-shift to operate, after all? And while the standard auxiliary and USB input are great for those who don’t mind being wired in, wireless streaming is much more convenient (and not nearly as dependent on device compatibility as a wired connection). Those who opt for the more feature-rich Touring model will find standard Bluetooth connectivity.

On the whole, the interior is a significant upgrade from the 2013. The seats are nicely bolstered and the cloth in the Sport trim looks attractive and feels durable. The stitching on the seats is especially well done, and the contrast-stitched seats in a Grand Touring model make the Passat’s seating surfaces appear dowdy by comparison. And while the oft-maligned navigation surround is actually assembled from solid materials, the cheap LED clock on the dash does ruin the mood a tad. But hey, if Lexus can get away with it, so can Mazda, right? 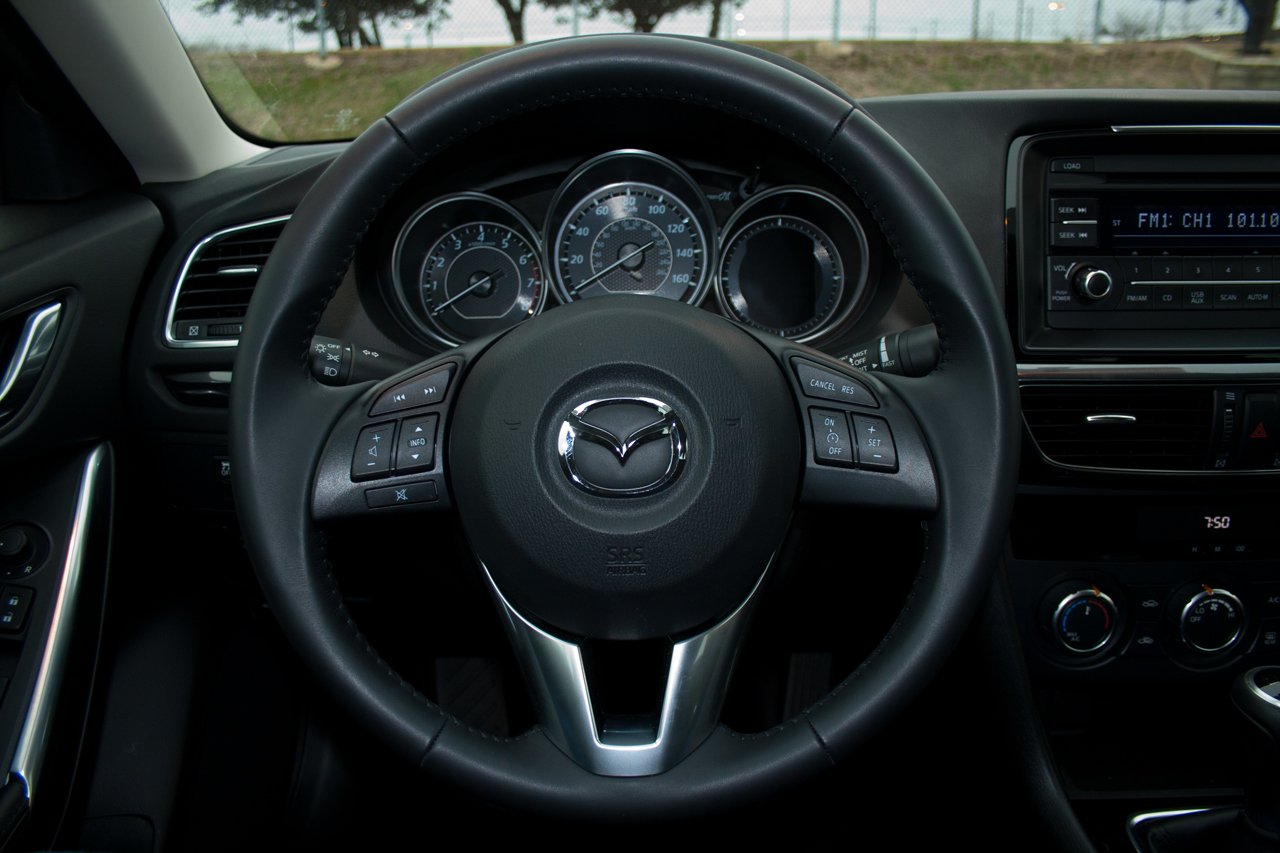 Where Mazda really scores points is with the touch points. The switchgear feels better than in previous Mazdas, and the controls are all very conventional. The standard leather-wrapped wheel is pleasant to hold and the audio, cruise control and MFD controls are all mounted on the spokes, not buried around the hub. Kudos there. The biggest improvement in this department, however, is the shifter. I loved my 2006 6s, but the feel of the five-speed was far from the best in the business. The SKYACTIV six-speed in the 2014 is buttery smooth, light and just wonderful to throw. The clutch feel could be better, but that’s the only negative here. This is one of the best front-wheel-drive shifters out there, period.

I’ve mentioned SKYACTIV twice without much explanation, so allow me to expand on that a bit. The CX-5 and the 6 are the first generation of “true” SKYACTIV Mazdas. Where the Mazda3’s aging Focus platform won’t accommodate a SKYACTIV-G engine with all of the bells and whistles, these newer, larger cars underpinned by Mazda’s GJ platform have more than enough room for the SKYACTIV-engineered exhaust header. The massive, equal-length collector hanging from the back of the 2.5-liter, direct-injected four cylinder engine is a dead giveaway.

The lightweight, high-tensile steel construction and reduced suspension complexity (gone are the first- and second-generation cars’ double-wishbone front suspension) work in harmony with the highly efficient engine and transmission, resulting in a lighter, quicker, funner (yes, funner) package. The sheer size and weight of the Americanized second-generation car could make it feel ponderous at times. No longer.  At the helm of the 2014 Mazda6, it feels like 2003 all over again. 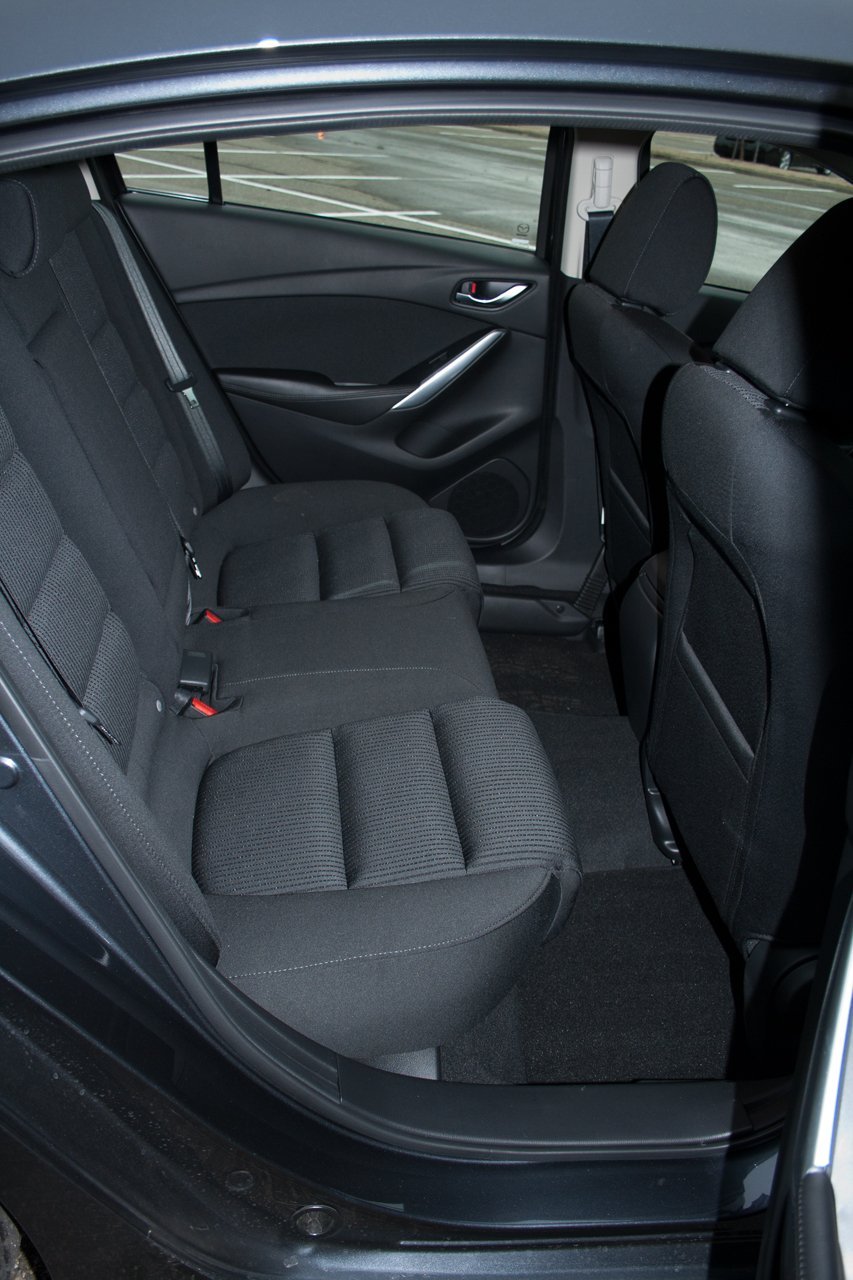 The 6 reacts to wheel inputs with gusto, turning in aggressively and accurately. The chassis is so willing that it’s very easy to over-drive the family-friendly OEM tires when you get aggressive. Our Sport was specced with the standard 17” wheels and 225/45R17 all-season tires. Unfortunately, the 19” wheels on the Touring and Grand Touring come with all-season tires of the same width (likely for fuel economy reasons, as wider tires mean more drag), so if you’re in search of more lateral grip, you’ll have to eschew the OEM replacements in favor of a summer compound (or something wider).

The 6’s 184 horsepower isn’t class-leading, but its 38-mpg highway rating is (tied with Nissan), and the 6’s fuel economy numbers are expected to get a boost when Mazda’s capacitor-based i-ELOOP system becomes available for purchase this summer. i-ELOOP is a capacitor-based system that runs power accessories using energy stored from engine braking.  A 6 equipped with i-ELOOP hasn’t been tested by the EPA as of yet, however Mazda is aiming for a 40mpg highway rating for vehicles so-equipped.

What’s truly remarkable about this powertrain, however, is that its power and efficiency are both very honest.  When you start to rip on it, the 6 feels like it has just shy of 200hp. You can pass without taking the 6 out of top gear if you’re so inclined. It won’t be the sort of pass that sucks the doors off of granny’s bingo barge, but it’ll happen. But the best part is that you can drive the car like a normal human being and get the gas mileage you see on the sticker. Some cars require borderline hypermiling techniques to accomplish the same thing. I won’t name names. You know who I’m talking about. 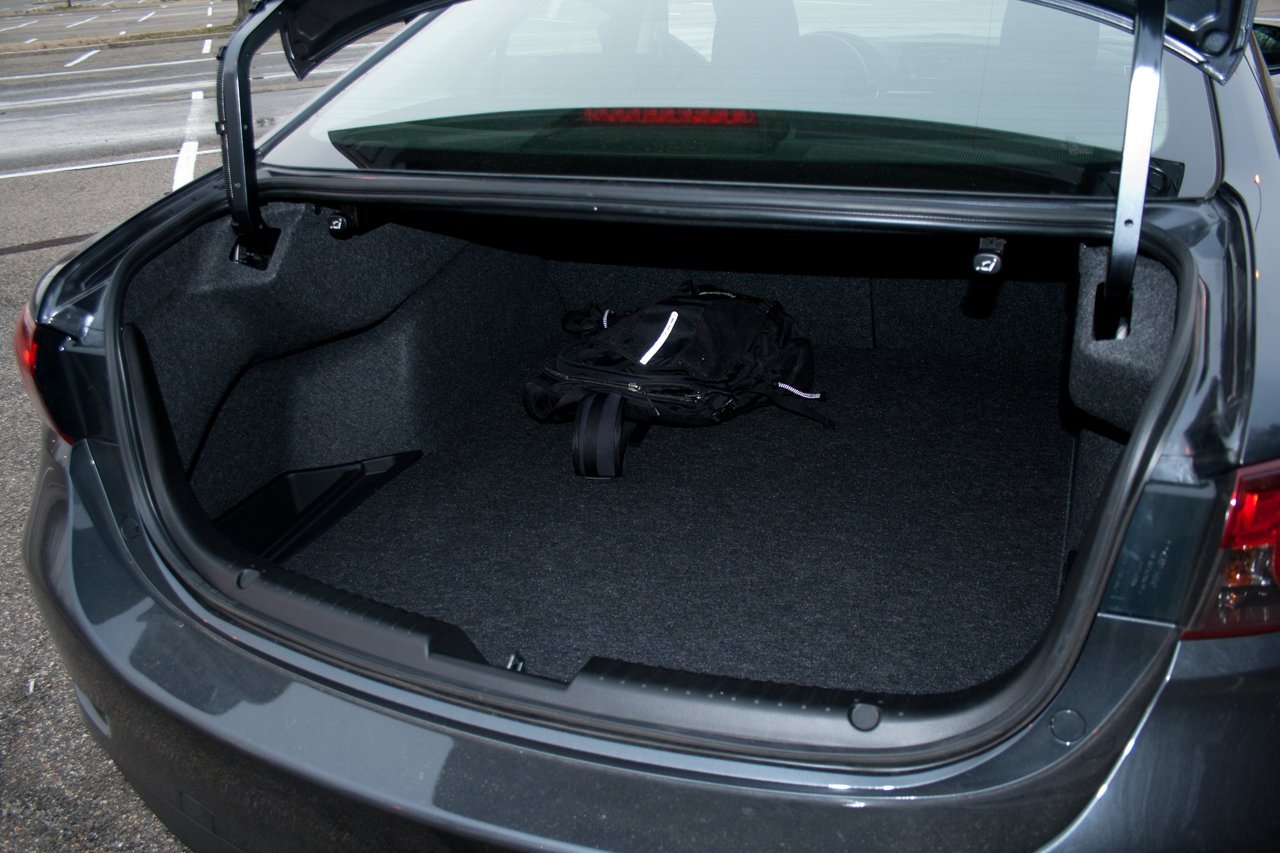 While the new 6 may be smaller than the car it replaces, the interior is still roomy and practical. The trunk is massive—much bigger than I had expected, in fact—and while Mazda decided to cost-cut in its trunk hinges this time around, the intrusion points are covered by trim, so there’s no guesswork involved in placing your suitcase. If it fits inside the trim, it fits inside the trunk. Hey, if it’s good enough for Audi, it’s good enough for Mazda, right?

Inside and out, the 2014 6 is a winner, and it couldn’t have come at a better time for Mazda. The market—the image-critical midsize segment in particular—is on the upswing and the messy Mazda/Ford divorce is long over.  30,000 units? Here’s hoping they blow that figure away.

Mazda provided the 6 for the purpose of this evaluation.