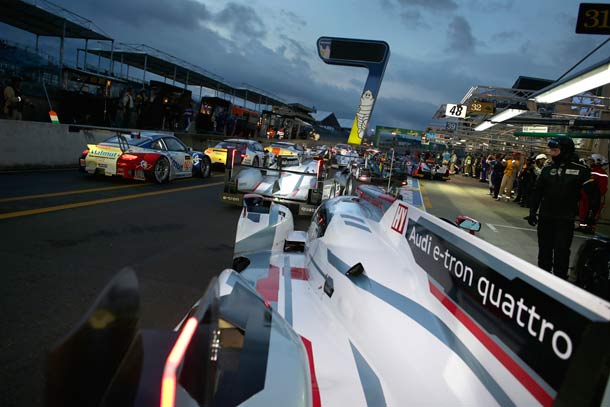 A total of 56 cars will start the race this year with 8 LMP1 entries, 22 LMP2 entries, 12 GTE Pro entries, and 14 GTE Am entries. The Le Mans juggernaut Audi Sport Team Joest is back to attempt their 12th win in 14 races at Circuit de la Sarthe, this time entering three R18 e-tron quattro long-tail. The no.2 R18 e-tron quattro starts on pole position with a fast lap time of 3:22.349, which was set by Loïc Duval during qualifying session #1 on Wednesday. The time remained unbeaten on Thursday partially due to damp track conditions which kept the cars running slower through the laps.  This marks the first pole position at Le Mans for Duval’s teammates, Tom Kristensen and Allan McNish.  The #1 R18 e-tron quattro of 2012 Le Mans winners, Marcel Fässler, André Lotterer  and Benoît Tréluyer starts in the second grid spot with a qualifying time of 3:23.696. The third spot on the grid is held by Le Mans rookie, Lucas di Grassi who is joined by Marc Gené and Oliver Jarvis in the #3 Audi R18 e-tron quattro with a lap time of 3:24.341.

The LMP1  Toyota TS030 Hybrid teams haven’t kept pace with the Audi teams throughout the three qualifying sessions, and start in positions 4 and 5. Stephane Sarrazin set the fast lap in the #7 Toyota TS030 with a laptime of 3:26.654, while Kazuki  Nakajima put the #8 TS030 in the 5th position with a 3:26.676. Sarrazin in the #7 TS030 will be joined by teammates Anthony Davidson and Sebastien Buemi. Nakajima in the #8 TS030 will be joined by teammates Alexander Wurz and Nicolas Lapierre. Both Toyota teams ran the full race setup during qualifying sessions.

While the Audi teams were faster overall in qualifying, the Toyota teams shouldn’t be ruled out based on lap times alone. Remember, this is a 24 hour long race and strategy is just as important as outright speed. Both hybrid and non-hybrid gasoline cars in LMP1 will be allowed an additional 3-liters of fuel. Non-hybrid gasoline cars were already given an extra 5-liter capacity before the start of the 2013 WEC season. This means that the Toyota TS030 Hybrids will be carrying 76-liters of fuel compared to the 58-liters of the Audi R18 e-tron quattro cars. Estimates are that Toyota will be getting around 12 laps per tank of fuel versus 10 laps per tank on the Audis. Over 24 hours, that means an additional 7 stops for the Audi teams. This will definitely be an interesting race if both teams can keep the cars mechanically reliable.

The top spots in GTE Pro belong to Aston Martin Racing with a 1-2 starting grid position. Frederick Makowiecki set the fast lap on Thursday of 3:54.635 in the #99 Aston Martin Vantage V8. Makowiecki is joined by teammates Rob Bell and Bruno Senna.  Position #2 went to Stefan Mucke who managed a 3:55.445 in the #97 Aston Martin Vantage V8. Mucke is joined by Brits, Darren Turner and Peter Dumbreck. Position #3 in GTE Pro went to Marc Lieb in the #92 Porsche AG Team Manthey 911 RSR with a lap time of  3:55.491.

The American factory teams of Corvette Racing and SRT Motorsports seemed to have trouble putting down fast laps in qualifying with Oliver Gavin putting the #74 Corvette Racing C6.R in 8th position well off the lead pace with a lap time of 3:58.644. The SRT Motorsports Viper GTS-R teams (which make their return to Le Mans after a 10-year absence) start in 10th and 11th positions.

Aston Martin Racing also dominated the top spots in GTE-Am with Allan Simonsen clocking a fast lap of 3:57.77 in the 95 Aston Martin Vantage GTE.  Krohn Racing rounds out the grid in the 56th spot after suffering a massive accident on Wednesday with Tracy Krohn behind the wheel. The team spent Thursday almost entirely rebuilding a car from a loaner Ferrari 458 chassis.

The green flag drops at the  90th anniversary of the 24 Hour Le Mans at 3pm local Le Mans time (10am central time)  on Saturday.