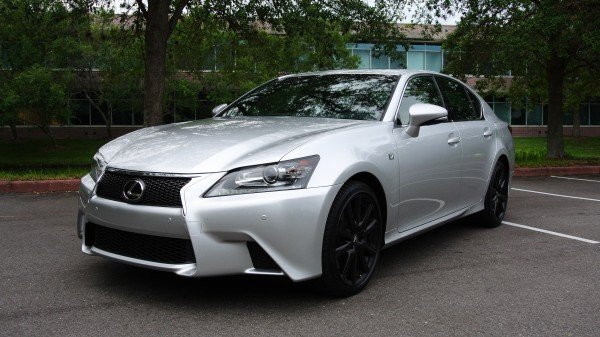 Vanity, thy name is midsize executive saloon. Few automotive categories are more about being pure arm candy for their owners than $50 – $70,000 luxury sedans. Think about it – if the only thing you were after was practicality, you’d probably be looking elsewhere. These cars are often tighter inside for four passengers than a midsized family sedan, their gas mileage trails that of the roomier FWD luxury segment unless you spring for a hybrid model, their reflexes aren’t quite in the realm of sports sedans (that’s what the halo models of their respective ranges are for) and they are, of course, priced out of the reach of the everyday shopper. And yet, none of that really matters – because few better ways exist of really letting your neighbors know you’ve made it. 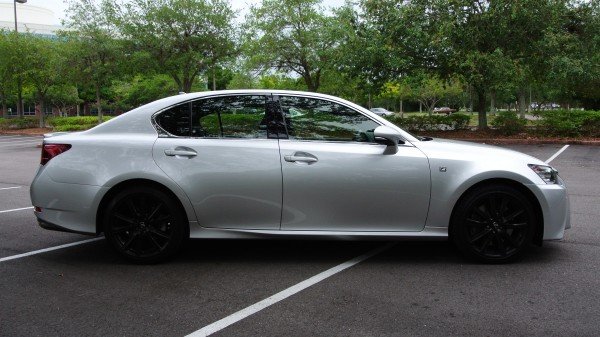 If shoppers in this category were driven purely by rationality, they’d be in line for a Lexus ES350 rather than a GS350. After all, the ES350 I had last month was a perfectly nice car – most Lexus drivers have one, in fact. And therein lies the rub, you see. Midsize executive car buyers are looking for the X factor – something that says, “Yes, I certainly could have had something more sensible, but I went for this simply because I could.” They’re after something most people can’t have.

Traditionally, an E-class or 5-series fit this role perfectly. Maybe an Audi A6 if you were an out-of-the-box thinker or found a Saab too plebian. The Japanese carmakers arrived late to the midsized luxury game and try as they might to make up lost ground with quite competent models, their offerings never made as big a splash in the pond as they’d hoped. The original Giugiaro-designed GS300 bowed in 1993, but as the mid-1990s yen to dollar exchange rate became less and less favorable for Lexus’s bottom line, each successive generation of the GS bore the responsibility of “turning it all around” for the model. The quad-headlighted second gen shared most of the original’s handsome fastback roofline, but by the time the third generation rolled around, its design had become a bit too anodyne to stand out against the likes of the then-brash Bangle-styled 5-series and edgy CTS. 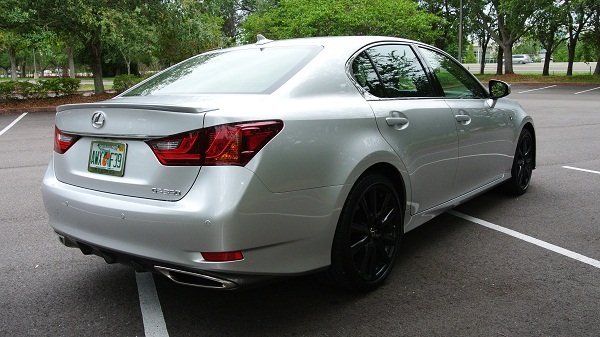 Lexus has now addressed what many felt was the only true criticism to be leveled against the old car, the styling. Whatever you think of the fourth-generation GS, you’re unlikely to label it bland. Particularly the spindle-grille-dominated nose, whose design ranges from bold on the standard model to downright daring on the F-Sport. Although it took some warming up to, by the end of the GS350’s stay with me, I felt the Lexus designers had pulled off the F-Sport look convincingly. The current M-Sport 5-series and AMG package E-are no longer what you could call subtle, so it appears buyers in the segment are ready for the creases and swoops these sport packages are increasingly offering. Walking around the sides and back of the GS, you’ll see the design theme continued and finished off with dual exhaust tips integrated into the rear bumper similar to the IS-F. The F-Sport conveys its mission well and overall, I found it to be quite handsome. 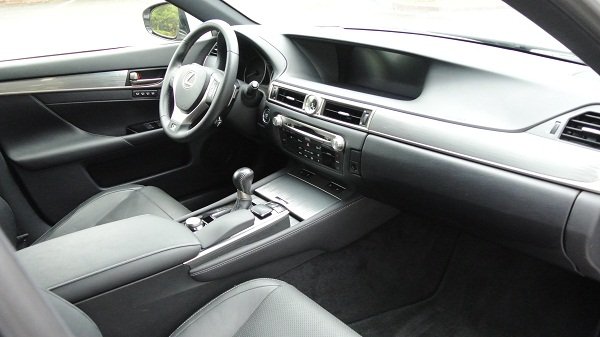 For the GS to be able to compete with a straight face, though, the “sport” in F-Sport needs to be more than skin-deep. The $5,690 F-Sport package contains the aforementioned swoopy front bumper and underspoilers but more importantly, a plethora of chassis upgrades. Chief among those are the staggered 19” Dunlop SP Sport Maxx performance summer tires wrapped around wheels in a “dark graphite” finish. They can call it whatever they want, I know black when I see it, and against our tester’s Liquid Platinum (aka silver) paint these black wheels look quite good. The F-Sport also sits atop adaptive dampers, variable gear-ratio electric power steering (at its quickest ratio – 2.2 turns lock to lock – it’s very quick indeed), and 14-inch, two-piece front brake rotors with four-piston calipers. Our car also had the optional rear-wheel steering system, and with it the GS proved nimble and light enough to be accurately placed wherever you want it. Grip levels with the summer tires are high, and on them the car can be tossed around with abandon. 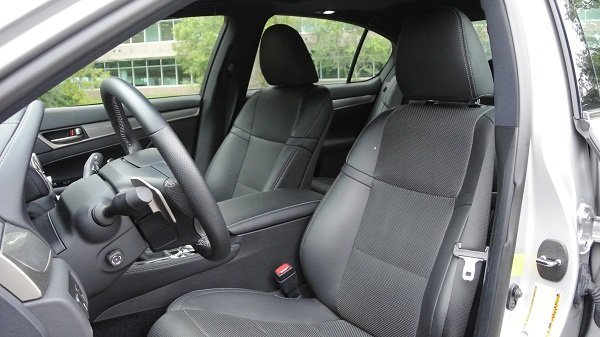 Steering feel and chassis feedback aren’t as crystal clear as those in a harder-edged sports sedan would be, a sentiment Byron noted when he reviewed a GS350 F-Sport earlier this year, but the GS350 still turns into corners with alacrity and never tempers your sporty intentions with mushiness or slurred responses. I grew to appreciate the power steering, which while light, makes up for its electric-based roots with its speed and accuracy. Its variable ratio is also a godsend in that it slows down nicely on highway slogs when you don’t feel like playing DTM driver. In fact, the whole car pulls off the dual-character thing very well – playful when you want it to be, unobtrusive and dignified when you don’t. 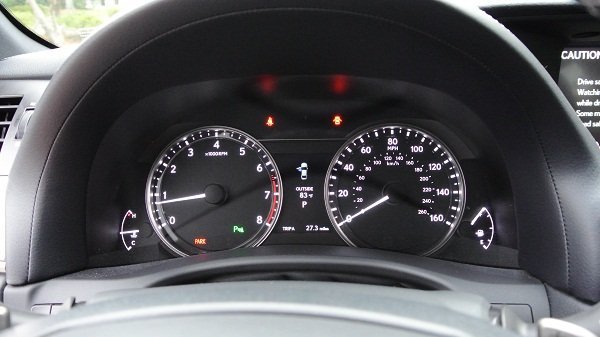 The familiar 305-horsepower 3.5-liter direct injection V6 and 6-speed torque-converter automatic transmission pull double duty in the GS350, and do so quite well. The automatic doesn’t quite provide the snappy shifts of the best dual-clutches, but neither does it stumble in stop-and-go traffic or away from a hill stop as those transmissions often do. The V6 moves the GS with far more urgency than its 305 horsepower and 3,795-pound curb weight would suggest, an intake sound tube piping in engine growls to convincing effect. The BMW 535i, which the Lexus squarely targets, makes do with similar horsepower but is 295 pounds heavier at the curbs. While it’s got two more speeds in its gearbox and 300 of the strongest Bavarian horses in the business, I think it’d still be a close fight at the stop lights between it and the GS350. 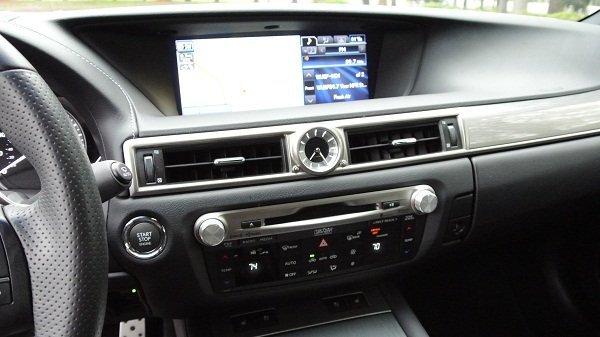 As a value proposition, it appears the GS350 has finally exorcised its old exchange-rate demons, since a similarly optioned 535i with the M Sport package, navigation, a high end stereo to rival the Lexus’s frankly outstanding 17-speaker, 835-watt Mark Levinson system and other assorted options will run well past the Lexus’ as-tested sticker of $60,349. Not every GS shopper needs the F-Sport package, but in all honesty it’d be hard for us to pass up – it imbues the Lexus with the necessary amount of “sport” to really take the fight to its autobahn-bred competitors. The fact that even a standard GS350 presents such a convincing case for itself speaks volumes about Lexus’ work on this car and hopefully signals future direction that we enthusiasts can really look forward to. And it also makes us realize just how good a full-fat GS-F version would be. Lexus, can you hear us?