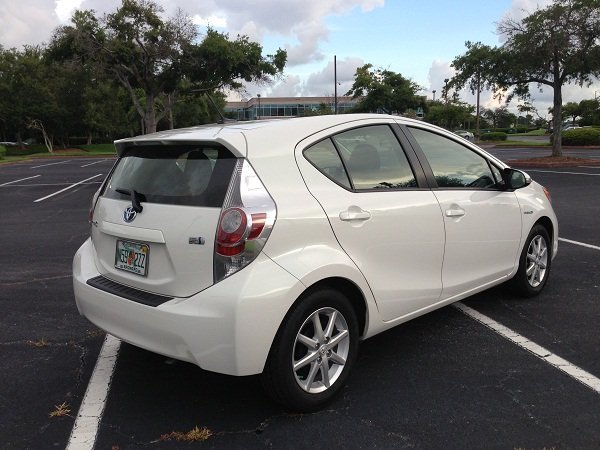 Around the middle of my third day driving the Prius c, I realized the car had won. It had succeeded in turning me into the equivalent of one of Pavlov’s dogs, dutifully following the throttle-based energy monitor’s screen until I had achieved sufficient “eco” status while driving. If I was really good, I’d even trigger EV-only operation. Much salivating commenced.

As a bit of a lead-foot, I never expect to get anywhere near manufacturer-rated mileage estimates for whatever car I’m driving. If I’m lucky, I’ll average just above a car’s rated “city” figure. The Prius family, and particularly the city car-sized “c”, breaks driving down into a more basic element: not stop, not go – just metering out of energy. Whether that energy comes in the form of gasoline or the car’s on-board battery pack depends on your driving style and travel patterns. If you’re tooling around town at low speeds, with an optimally charged battery, you might see half your travel time occur on battery power alone.

That’s an empowering figure, and one that draws many a customer to Toyota’s doorstep. But for car enthusiasts, there’s not as much pleasure to be found in eking out every last mile to the tank as there is in burning around corners and masterfully executing a heel-and-toe downshift. None of that matters to the Prius c. Its mission is to get you to your destination with a slightly fuller wallet than you would have after a trip in almost everything else on the market today. It’s an econobox of the most pure form. That isn’t to degrade the car; it’s just a statement of fact. Everything about it screams economic sense and sensibility, a quality that’s recently come back in roaring fashion. 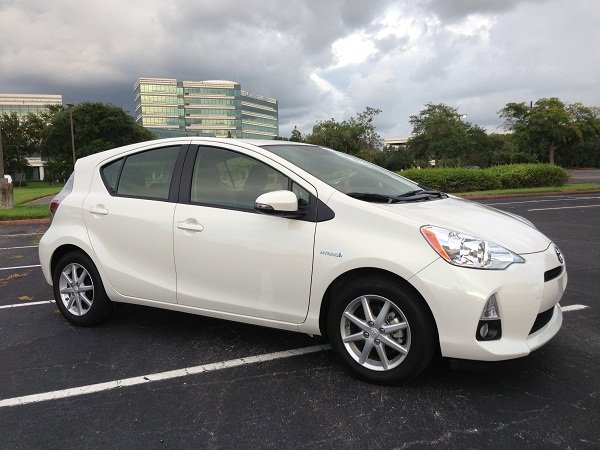 Toyota did a pretty good job of melding the design language of the regular Prius line and the Yaris hatchback on which the c is loosely based. Both the front and rear end slope away from the roof toward the ground, forming a fully curved roofline and enabling the lozenge shape that so aids fuel efficiency. It’s not a bad looking shape on our tester’s 15-inch alloys, although the severely pinched rear end limits visibility out of the backlight. 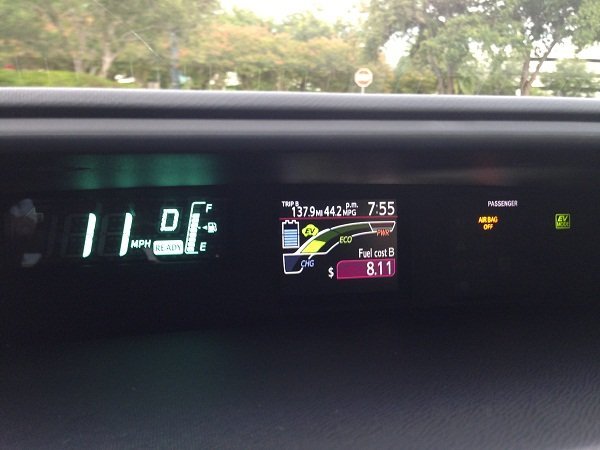 Inside, the Prius-meets-Yaris theme continues, with a center-dash digital gauge “cluster”, traditional gated shifter on the floor, and simple radio and climate controls. I found it easier to work with this car’s interior than that of the traditional Prius, preferring the floor-mounted shifter to the Prius’ joystick-like controller, and reveling in the absence of that car’s reverse warning chime. The multicolor digital gauge display also appears better executed in the c, although I’d still prefer it if it was directly in front of the driver instead of canted off to the side. Interior space is quite decent considering the car’s miniscule footprint, handling four adults with relative ease for an hour at a time. Road noise is noticeable though, with excess sound deadening tossed out in favor of keeping the c’s weight (a paltry 2,500 pounds – 500 pounds lighter than the standard Prius) down. 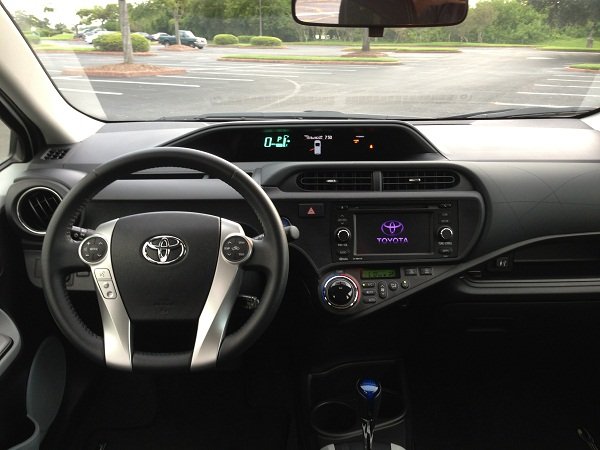 Like its bigger brother, the c features an inline-four cylinder engine mated to a nickel-metal hydride battery pack and AC electric motor, driving the front wheels through a continuously variable transmission, though all the power-related bits are slightly downsized relative to the Prius to take into account the c’s smaller and lighter stature. The four-cylinder is a 1.5-liter (plucked from the original Prius) rather than the larger car’s 1.8L, and together with the more compact batteries and electric motor, hum to the tune of 99 total system horsepower and 82 lb-ft of torque. 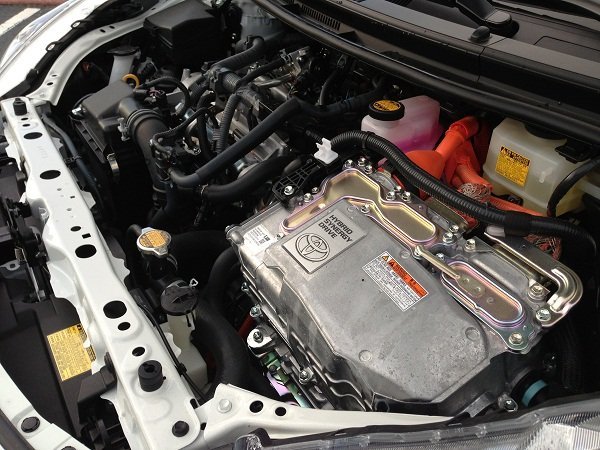 Though the Prius c is svelte at the scales, there’s no getting around the fact that its power-to-weight ratio is equivalent to sticking a 198-horsepower engine in a 5,000-pound truck. Acceleration requires mindfulness and planning. Also in the back of your head is the understanding that mashing the accelerator to keep with the flow of bustling interstate traffic will also cut into your combined fuel economy figures. Like I said before, Prii have the ability to change even the most hardened car tester’s driving habits. I know this, because although my week in the car heavily featured 70 mph highway driving, a scenario in which the Prius c sucks down fuel with no respite to catch its breath on battery power, I still achieved a 45 mpg average. 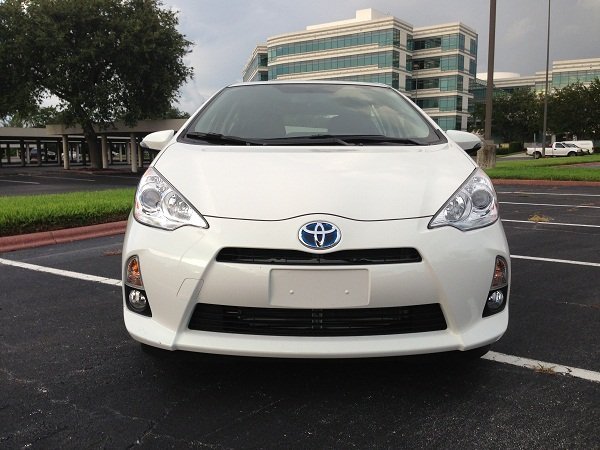 All Prius c models have the ability to deliver this kind of exceptional fuel economy, because they feature identical running gear. At a $19,875 price of entry, the Prius c One still brings buyers all the niceties one would expect in any new car, including automatic climate control, power everything, Bluetooth streaming audio and iPod connectivity. Shelling out a grand more for the Two brings a six-speaker stereo, different seat fabric and more adjustability for the driver, a 60/40-split folding rear seat (in place of a one-piece folder on the base car), cruise control and an armrest. The $22,560 Three adds color-keyed door handles, a touchscreen audio system with Navigation and Entune app suite, voice command and a smart key system. Our $25,103 Four tester had every option except the proverbial kitchen sink thrown at it, including SofTex pleather trim, heated seats, 15” alloy wheels and foglights.

As an economical city runabout or an entry point into the Prius brand for a potential first-timer, or perhaps a family that wants to add a smaller member to an existing Prius fleet, the c serves as a solidly recommendable spendthrift.