It’s the same story with the rest of the design details – the bulging frog eyes on top of the fenders aren’t actually the headlights, but rather the parking lights and turn signals. The circular lights below handle the main illumination duty. On this NISMO model, a row of LEDs in the lower air intakes draw your eyes to the restyled bumper. The gaping mouth has a jutting front spoiler, and along with the extended side sills and rear diffuser, comes trimmed in grey with red pin striping. Red-painted side mirrors and a larger rear spoiler round out the body differences. The NISMO’s standard 18” graphite-hued alloy wheels come wrapped in Continental summer tires. Regardless of aesthetic preference, the aero additions actually do bring increased downforce at speed.

In the cabin, a pair of handsome NISMO bucket seats, heavily bolstered and covered in synthetic suede, hug gently – they look punishing, but they’re actually wide enough to prove comfortable but grippy to even the generously-framed. The armrests and steering wheel are also wrapped in Alcantara, the wheel featuring a red leather band at 12:00 – think of the NISMO as a Frog GT3 RS. The cabin is handsome enough and well-assembled, and all of the controls fall readily to hand. The driver’s got a nice vantage point over traffic, but the seating position isn’t tall enough to cause second thoughts before plowing into corners. Again, despite its crossover title, the visual reference point inside is more akin to sitting on a phonebook in a normal hatchback, rather than a true CUV like Nissan’s own Rogue or a Honda CR-V. 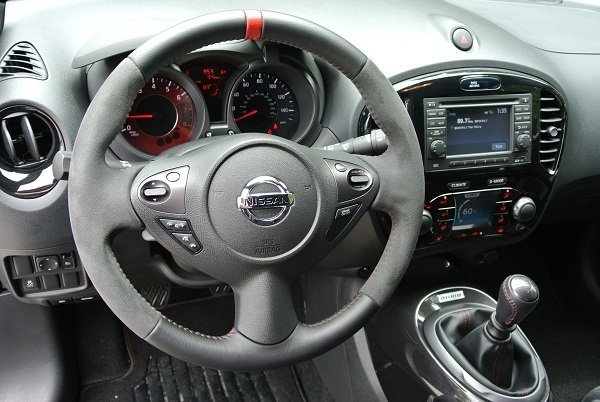 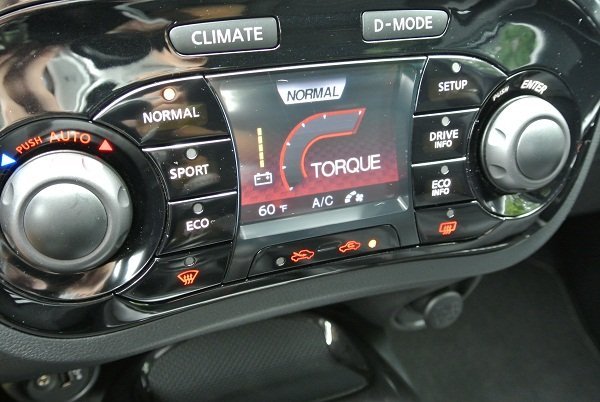 Setting off, I’m glad to have been handed the keys to a manual-equipped Juke rather than the CVT. The six-speed’s stick rows cleanly through its detents, and clutch take-up is light and progressive. This would be an easy car to teach somebody manual on. Pedal placement is even decent for heel-toe work – a surprise in a vehicle that was converted to NISMO-spec rather than being a clean-sheet sports design. With 197 horsepower (up from the standard Juke’s 188) to haul around 2,930 pounds, the Juke NISMO actually sports a better power-to-weight ratio than the GTI – although the VW’s 2.0 TSI engine is notoriously underrated at 200 horsepower. In practice, the NISMO probably runs about a half-second behind the GTI’s mid-six second run to 60 mph. That certainly places the NISMO in the “not fast” camp, but there’s enough grunt on hand to put a smile on your face in day-to-day commuting. The 1.6-liter direct-injection mill’s pint-sized turbocharger puffs up the boost quickly, and doles out its 184 lb-ft of torque generously enough to make even top gear passing a mostly drama-free affair. A tune and freer-flowing exhaust system would probably do wonders for the NISMO’s upper-rpm breathing, as winding it out in the lower gears makes it feel (and sound) noticeably choked back. 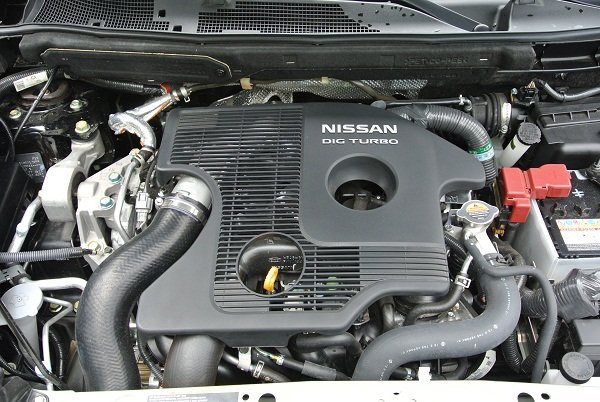 Your first inclination when driving a crossover might not be to carve up the nearest switchback, but given the Juke’s already segment-straddling aptitude for cornering, the NISMO-provided suspension upgrades – composed of stiffer springs and shocks, and retuned electric power steering – allow for flatter cornering and higher limits on the standard-issue summer rubber. Having been flung around Sebring International Raceway in a standard Juke by none other than S:S:L’s prodigal son Jack Baruth, I can attest to the fact that the NISMO edition displays much less of the base car’s tendency to lean over at (and past) the limit. Perhaps it’s also a testament to the confidence that greater seat bolstering provides, but even in tight turns, the Juke NISMO simply doesn’t roll like you’d expect a vehicle with its center of gravity to.

Whatever you label it, the Juke NISMO is compact but fun, made better by the fact that it doesn’t take itself too seriously. While not a pure performance machine, the NISMO’s incremental upgrades in the powertrain and suspension departments make noticeable improvements to the driving experience. Not to mention that the seats and steering wheel – which wouldn’t look the least bit out of place in a 370Z NISMO, to be honest – make even boring commutes a little more interesting. Couple that with its low cost of entry – under $24,000 – and it honestly starts to make a strong case for itself. When even loaded versions of mainstream variants in the compact class (meaning Civic, Focus, Dart and Mazda 3) can crest $25 grand, the fact that for the same money, you can get something with genuine performance enhancements as well as the potential to uncork even more power, and the chips begin to stack in the NISMO’s favor. While base versions of the Mini Cooper S and GTI start in the same ballpark, you won’t receive close to the equipment levels of our Juke tester in those cars, which included navigation, a premium sound system, keyless entry and start, and a backup camera. Often overlooked, the NISMO provides new reasons to add the Juke onto a shopping list for compact, fun-to-drive hatchbacks. Just don’t call it a crossover.