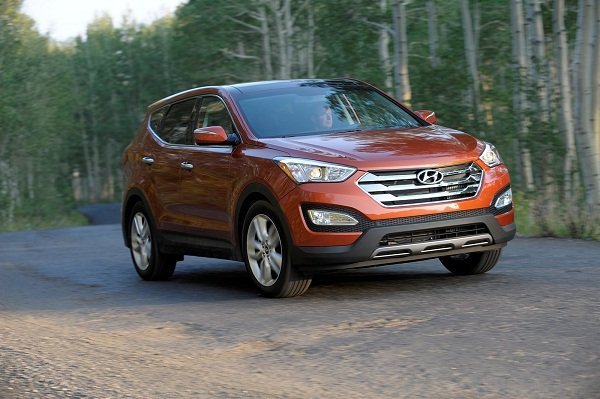 A little over six years ago, my mom came to me for some advice on an upcoming vehicle purchase. Having had two full knee replacements in the preceding five years, the low-slung Integra LS hatch which had dutifully served her up until that point was proving a bit too uncomfortable for her nearly 6-foot frame to get into and out of on a daily basis. She’d had a pair of Ford Explorers during the SUV heyday of the mid-1990s and loved the ability to slide in and out of the front seat basically at hip level. Her goal was similar capability in her next car, but something smaller and less “truck-like” than the Explorer. Luckily, the compact CUV market had hit its stride by this point, and options were plentiful. 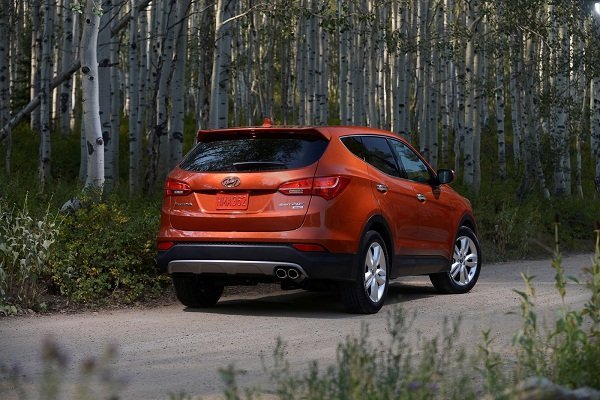 My first suggestion was the market go-to, and what with us being a loyal Honda family, also a no-brainer: the Honda CR-V. In late 2006, though, the CR-V was undergoing a controversial styling change, and I wasn’t sure she would like the new look. So, in addition to the CR-V, I pointed her in the direction of the Mazda CX-7, which was still fairly new to the market and definitely skewed toward the “sportier” end of the spectrum, obviously satisfying my enthusiast sensibilities. She also mentioned a Hyundai Tucson as an outlier, but I brushed it away – the Korean brands at this point still hadn’t fully broken through into mainstream consciousness, and in my (admittedly jaded, early-twenties) eyes, the Tucson just wasn’t compelling enough to warrant a second glance. 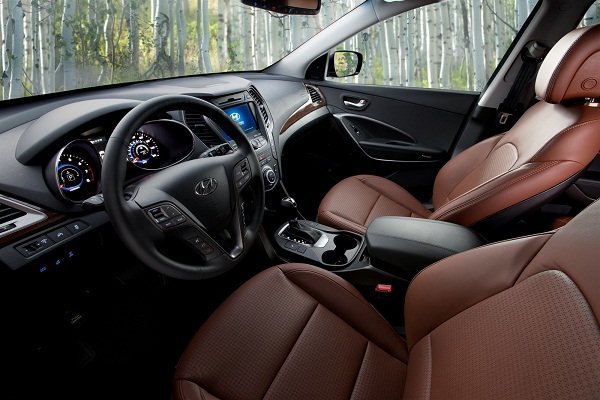 We drove the CX-7 and really liked it – well, I really liked it. I guess mom was a bit lukewarm, feigning enthusiasm for my sake since she could tell it was the one I wanted her to end up with. She went back and forth for a couple of weeks, and after I thought she had fully decided on the Mazda, I received a call late one night the week before Christmas. “Can you meet me at the dealership? I’m closing the deal on my new car!”. “Sure,” came my reply – “which Mazda dealer did you end up buying from?” “Not Mazda”, she said – “Hyundai – I got the Tucson.” My heart sank, just a bit. Here was a woman who, aside from a few trips to the Ford dark side in the 1990s, had been a Honda/Acura loyalist for the better part of two decades. I could understand choosing the CR-V over the CX-7 – it was the safer move, after all. But a Hyundai? Why choose that, aside from the warranty? Especially my mom, an upper-management type who could easily afford a high-end Acura or Lexus SUV…what kind of statement would a Hyundai make? 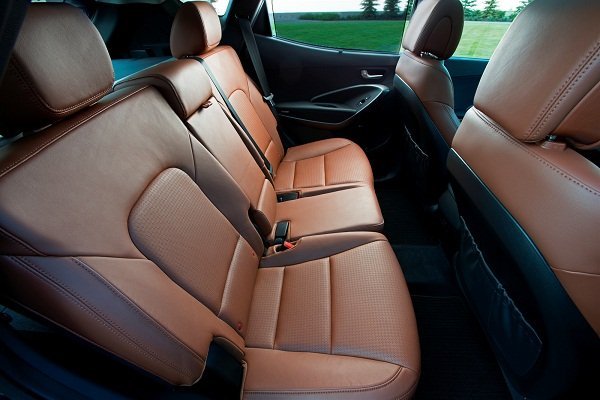 Evidently, my concerns were unfounded. Fast forward to today, and her Tuscon is going as strong as ever with a shade under 100,000 miles on the clock. In that time, it hasn’t caused any major headaches, requiring perhaps one or two minor warranty fixes and my mom’s overly fastidious quick-stop maintenance regimen of “induction” services, transmission flushes and tire rotations. It’s never excited me to drive, but she loves it, so what’s the difference, anyway? Therein lies the crux of Hyundai’s success in this country (and probably others) – while they may not scratch the itch that we car enthusiasts suffer from, at least up until the point the rear-wheel-drive Genesis models came to fruition, they do make functionally sound cars built from dependable bones. Coupled with an undeniable value quotient and the warmest safety blanket of a warranty on the market, Hyundais have been a no-brainer decision for many, but perhaps a no-heart decision for a few, including myself.

Such was the trepidation with which I approached the Sante Fe Sport seen here. I haven’t had a ton of seat time in the vehicles in the Sante Fe Sport’s class, typically labeled as five-seat mid-size crossovers. The Sante Fe sans-Sport has seven seats to go head to head with the Explorers, Pilots and Durangos of the world, leaving the Sport to do battle with the likes of the Ford Edge and Toyota Venza. Four-up, all occupants have plenty of stretch-out room, and there’s even breathing room for an occasional fifth when the need arises. I rolled five deep to lunch one day during my week with the Sante Fe Sport, and even with three adults in the back, I heard nary a peep of complaint. The outboard occupants even praised the B-pillar-mounted A/C vents. 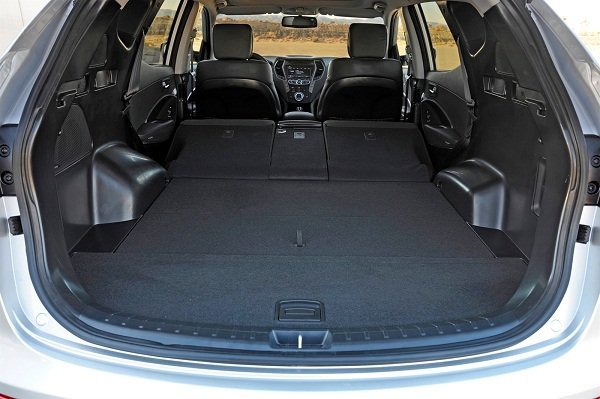 The rest of the Sante Fe’s cabin is handsomely styled and assembly quality is good for the class; harder plastics can be found, but they’re mostly far up the dash away from prying eyes (and hands), as is typical these days. The touchscreen menus and cluster graphics look basic compared with the most bleeding edge tech in the segment, but neither does Hyundai’s system frustrate with complexity. I’ll gladly trade a little UI design slickness for being able to actually operate the thing as I’m going down the road, and that’s precisely the compromise Hyundai’s engineers have struck here. I wish more manufacturers would do the same. 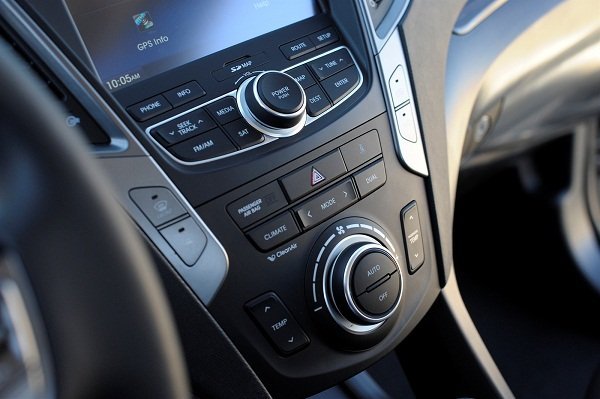 Walking around this ‘ute, it’s clearly got tidy proportions and a handsome wrap-around front end. Looks probably aren’t the primary deciding factor for 5-seater CUVs in this price bracket, but they are at least a factor, as both the Venza and Edge also sport noticeably chiseled soap bar shapes in terms of design, whereas their 7-passenger counterparts are more upright and utilitarian by default. It’s likely that, whereas family needs usually dictate the purchase of a three-row crossover, these two-row cars are also frequented by empty-nester and childless households, allowing styling and feature content to take more influence over a buyer’s wallet. 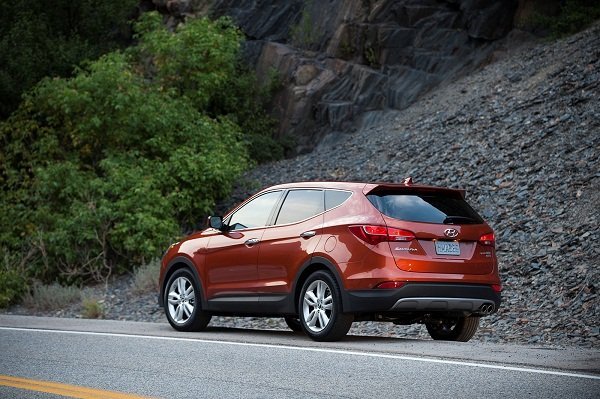 Driving dynamics are less likely to be at the top of a typical buyer’s checklist, but with S:S:L being a driver-oriented publication, we’d be remiss to let them take a back seat here. Like many vehicles with such-assisted helms, the Sante Fe’s electric power steering has three “feel” settings to choose from: normal, sport and comfort. Sport adds a syrupy layer of resistance to your inputs at the helm but doesn’t increase the speed, which I found totally unappealing. Switching things to Normal improves that gloopy feel a bit, but even still, for my preferences the steering never quite settled into a comfortable rhythm of its own at any speed or setting. That’s unfortunate, because the ride and handling balance is actually fairly well resolved and the car tends to shrink a bit from behind the wheel, thanks in part to a low dash and tall seating position. 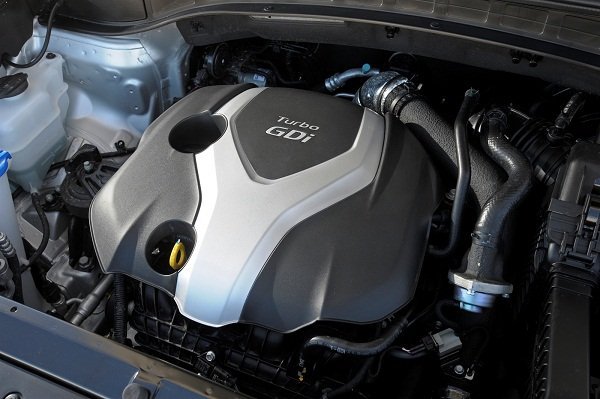 The powertrain is the area you can tell Hyundai spent the bulk of their development dollars against. Shared with various other members of the Hyundai family, the 2.0T GDI motor returns for duty in the Sante Fe Sport as the uplevel engine choice – larger Sante Fe models come solely with a 3.3-liter V6. A non-turbo 2.4-liter 4-banger is available in the Sport as well, but you’ll sacrifice 74 horsepower and 81 pound-feet of torque to gain just 1 mile per gallon in the combined EPA rating. Clearly, the turbo motor is the one you want.

Not wanting for power and torque, you’re rarely more than a throttle prod away from a decent reserve of passing power. That power is strongest in the midrange, where the boost feels at its most potent. Like many of these small-displacement pressurized fours, the shove does wane a bit at the top end. Luckily, turbo lag from the 2.0T is minimal, admirable in a 3,700-pound vehicle, and the Sport moves down the road with authority. Expect low 15-second passes at the quarter mile, if you’re so inclined. That was performance territory I could only dream about during my high school years as a Honda Civic devotee. Shifts go by smoothly unnoticed, as you would expect from a traditional torque-converter automatic. The six-speed also takes trusty upshift commands from the +/- rocker on the console, though even in “manual” mode it’ll upshift on its own near redline. Hardly a deal breaker in a vehicle of this type, though. 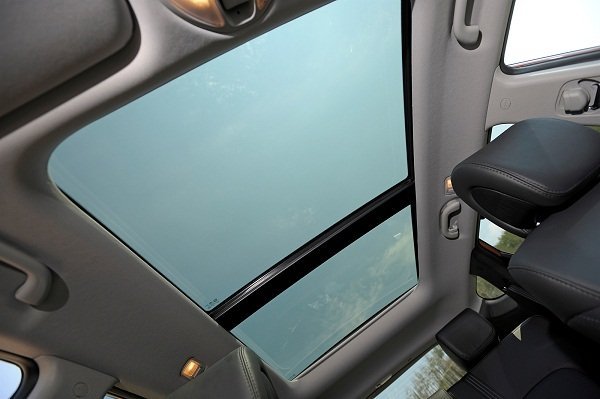 Overall, while far more advanced and well-equipped than anything Hyundai had on the market when the 2006 Tucson was in showrooms, the Sante Fe Sport still provides much of the level-headed appeal that sold my mom on that car years ago – it eschews the whizz-bang gadgetry and shades of sportiness offered by some of its competitors, in exchange for a well-rounded demeanor that appeals over time thanks to its lack of fatal flaws. Potential buyers would be well-advised to add it to their shopping lists, regardless of what their gearhead sons tell them.

Hyundai provided the vehicle for testing purposes and one tank of gas. Photos by the manufacturer.