The Rolex Monterey Motorsports Reunion, or the Monterey Historics, is an outlier during Monterey Car Week. In the midst of events dedicated to trailer queens and pampered exotics, the Historics is an event based around the ethos that classic sports and racing cars aren’t just meant to be preserved, they’re meant to be driven – and driven hard. Set at Mazda Raceway Laguna Seca, one of the most storied and revered racetracks in the US, it’s a rare opportunity to see classic iron pounding around its natural habitat. 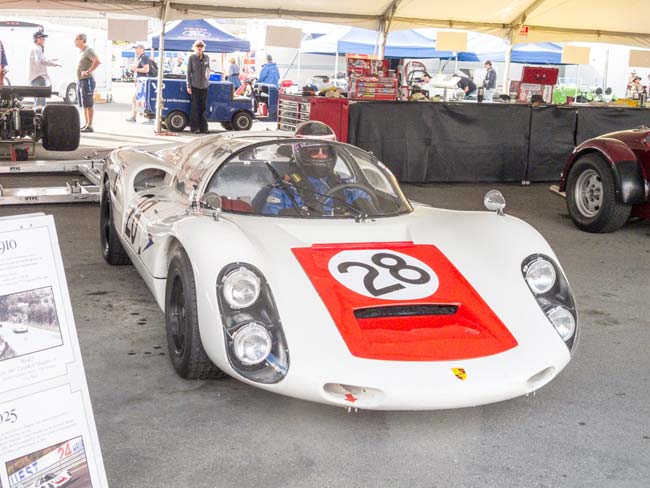 And, if I’m completely honest, it’s the event that everyone at the Gawker house, myself included, was looking forward to the most. The Concours d’Elegance is a very cool thing to attend and has the highest concentration of one-of-a-kind gorgeous cars in pristine condition anywhere on the planet, but for most varieties of car nerd, the Historics is the real prize. I tried to keep my expectations tempered, but as we stepped out onto the pulverized hilltops of Purple Parking to the sound of Pre-War sports cars rumbling around the racetrack, any pretense of detachment was abandoned and I practically sprinted down the hill to the covered bridge over the start-finish line. So distracted was I by the sights and sounds from the track that I walked groin-first into the steel bollard blocking the footbridge over the start-finish line, and I just didn’t care. My father has run a stock eliminator Chevelle for many years, where I became comfortable with the deafening danger-close aural artillery barrage of race cars turning over and idling down the lane next to you, the feeling of hot tarmac baking in the sun, and the sweet smell of leaded race gas. The paddock at the Historics was an identical environment, a welcoming place filled with the sights, sounds and smells of performance. 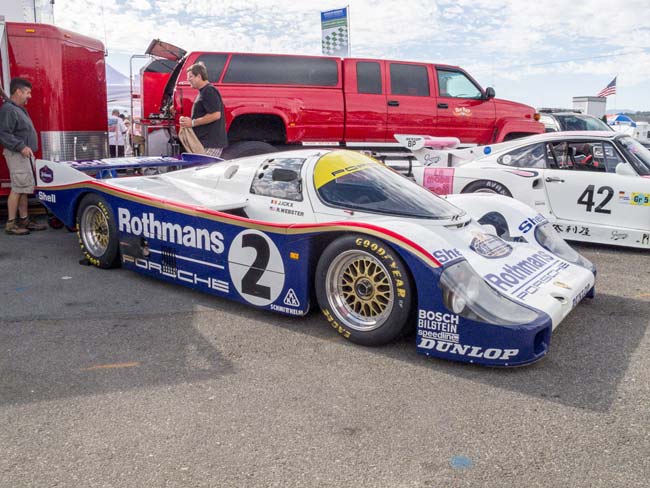 Invigorated by the heady air of excitement and horsepower, I hit the paddock hard, taking pictures of anything that caught my eye – and since cars with true racing pedigree were the norm and more than a few legendary race cars were scattered around, that was pretty much everything. Still, after a good half-hour of rapid-fire photography and soaking in the atmosphere, my concern about being able to adequately Cover The Story started to creep back in. I had hoped to score some interviews at the Historics with some owners and drivers, some grease-under-the-nails and gas-in-the-veins perspective to contrast with the owners of the perfectly polished and primped cars at the Quail and Concours. Standing in the way of that, however, was all of the silly racing going on. Everyone was busy getting ready to head out on the track for their session or tearing the car down after having done their session, leaving no time for a gadfly like myself to intrude.

I had started pacing around the paddock with a worried expression on my face, trying to figure out how I was going to make this work, when I ran into fellow Gawker house residents Josh Petri, Jason Torchinsky along with Hardigree, and Okulski cruising the paddock. They asked how I liked the Historics, and after some effusive gushing about it being the greatest place on the planet, I mentioned my concern about finding interviews. Hardigree and Okulski both admonished me to forget about it for the moment and just focus on having a good time, and so after we parted ways, I did exactly that and headed up the hill towards the Corkscrew to take in the scenery from the top, have a beer at the bar positioned overlooking the paddock, and spend some time taking a shitload of pictures from the bottom of one of the most iconic corners in motorsport. 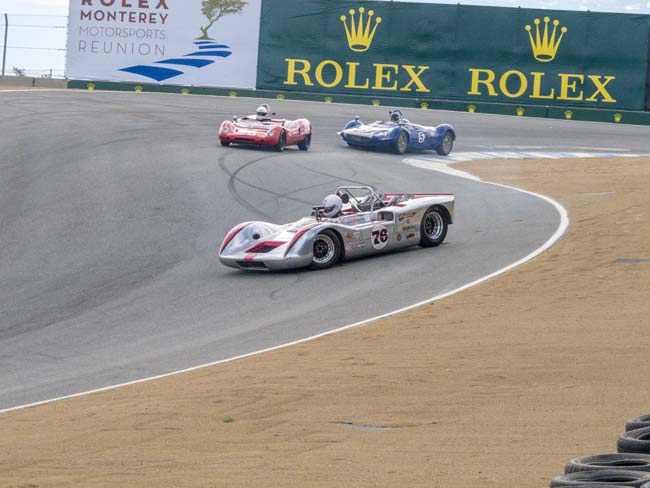 There, I watched BMW M1s, Morgan Three-Wheelers, and Porsche 935s and 914s hammer down the hills of Laguna Seca. AC Cobras faced off against Chevrolet Corvettes, and the big V8 engines of Trans-Am thundered past me, leaving ringing in my ears – The good kind of hearing damage, I told myself. As I watched some of my most idolized cars roar through the Corkscrew on a gorgeous Central California day, I figured that the interviews could take care of themselves during lunch. 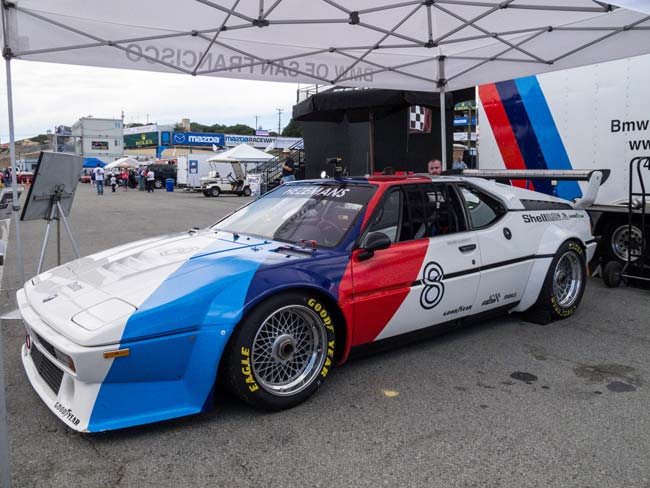 Except that they couldn’t. The work areas were all empty for lunch as people hit the food stands, and if not there, the owners and drivers had retreated into their trailers. The only time I saw anyone I could interview was when they filtered back to the paddock to prep for the races proper, and they were once again far too busy for me to bother them. I walked the whole paddock, and every pit was buzzing with activity. After a half-hour of fruitless wandering, I gave up on trying to get any interviews done at the Historics, and after watching the engine warm-up for four of Mazda’s insane-sounding rotary engined race cars, abandoned any pretense of getting work done for the day and headed off to meet up with my good friend and editor at Autoweek, Davey Johnson. 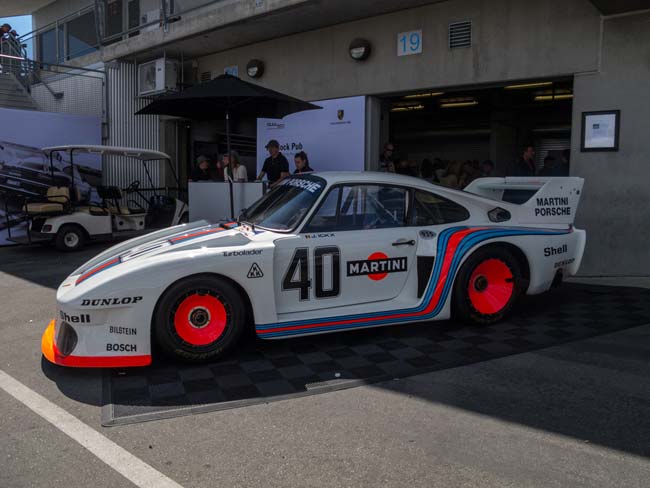 The end of the racing day found me sitting in the media center, staring out the window at the start-finish line as millions of dollars of historic race car pounded past and trying to think of anything I could use to salvage the day. I had, by my estimation, utterly failed at what I was there to do. Pictures of events like the Historics are a dime a dozen; every media outlet with a real presence at Monterey Car Week will have more and better coverage of the cars and racing that I could hope to provide. I had hoped to set myself apart by focusing my coverage on the owners and drivers’ thoughts and approach to the proceedings – something made rather impossible by my failure to secure any interviews.

So, without a story, I thought about what had happened. The Historics itself was, without a doubt, one of the greatest automotive experiences of my life. Simply being in the presence of some of those cars was privilege enough, but to see them run in anger was a once in a lifetime event. The Historics is no parade lap, cars were raced hard and even crashed that day, and the idea that the owners of those extremely rare and expensive cars felt that they were better off being driven properly than being restored to pristine perfection gave me a certain sensation of kinship with them, unlike yesterday at the Quail.

But, I remembered, only for the most part – the California Mille people believed in the same thing. After all, the event that they were there in support of is dedicated to driving on the road over a thousand mile course, not exactly gentle treatment for a vintage sports car. They might not be racing at the Historics – although I wouldn’t be surprised if some of them were there racing – but they were certainly of the same mind. And I couldn’t exactly level that charge against the others at the Quail, either. It’s not like racing at the Historics is something that anyone can afford to do anyway; both are automotive hobbies of the well-to-do. It seemed unfair of me to separate them from those racing in the Historics simply because one group show off their cars on manicured lawns, and the other on rubber-coated tarmac.

I shook my head. No interviews and no story, but I had one hell of a time and got a bit more insight as to how things really work. Tomorrow was the big day at the Concours, and now I was a little less certain that the true upper crust of the automotive collecting world would hew to my expectations – not to mention that it was my one last chance to salvage my story.