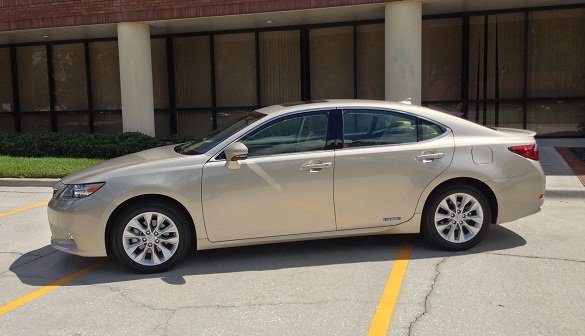 Put yourself in a place for a moment – one where Porsches, Mustangs and Corvettes are of little concern. Hard to imagine, I know, but bear with me – at some point, many car shoppers decide they’ve endured the stresses of enthusiast auto ownership for too long. Maybe they bore the brunt of a few too many high dollar repairs, or been left stranded in the office parking lot for the last time. They’ve grown weary of having something “sporty” and all the compromises that go along with that. It’s time for a change – they want something comfortable, relaxing, quiet and luxurious – maybe even something that gets really good gas mileage. For one reason or another, maybe a diesel is out of the question – you wouldn’t want your significant other accidentally topping off the tank with gasoline, you know. That can make for a hefty repair bill if you don’t go to the right sparks auto repair shop. They’d even be willing to consider a shade of beige for the paint color. If only there was a car that fit those exacting needs… 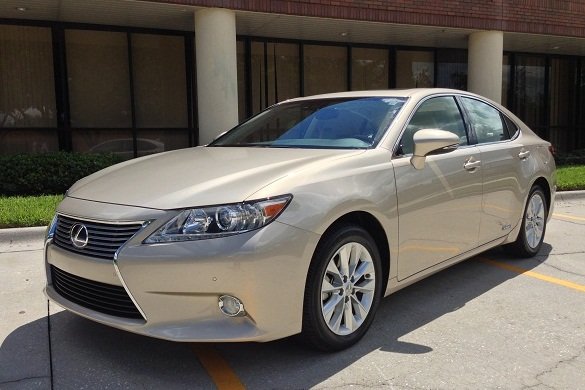 While that scenario I just described may not exactly our readers’ loins afire, you’ve got to admit – there’s probably a large subset of the new-car-buying population that holds those values very near and dear to their heart. Maybe your parents – your aunt and uncle – hell, give yourself a few more hard-earned years and the ES’ air-conditioned seats might start looking pretty good. After an impromptu 200-mile road trip one afternoon in the ES, my back and hindquarters were still sitting pretty; absent was the fatigue that typically plagues my back after a few hours on the road. The ES300h’s highway manners are without fault, providing a serene, quiet and comfortable place for one to pass the hours. It’d probably make a great cross-country car, this one, given that it gets nearly 40 to the gallon at an 80 MPH lope and delivers you in unfettered relaxitude. The stereo’s not bad, either. 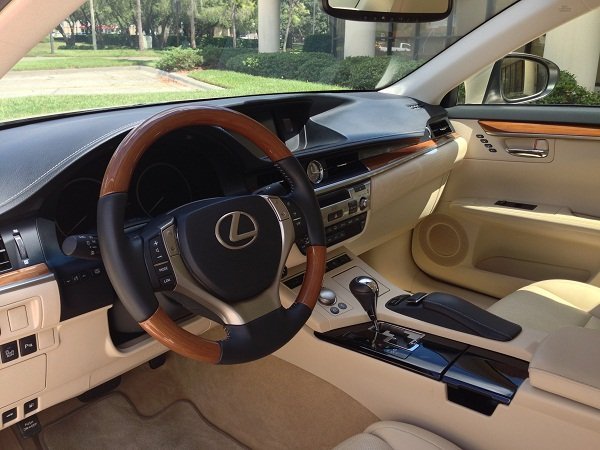 But how does it line up against its non-hybrid sister, the ES350? I had one a while back, and it shared the same characteristics of comfort and unobtrusive operation. However, the ES350 rings in about $3 grand cheaper than the 300h. Despite staring at a 13-MPG in-the-real-world economy deficit, the ES350 would still enjoy a four year price advantage before the 300h’s higher upfront cost started to pay out for a typical, 15k–mile-per-year driver. 4-year ownership certainly isn’t out of the question for a Lexus owner, although with leases taking a considerable chunk of new-vehicle acquisitions, for some that payout will never be realized. 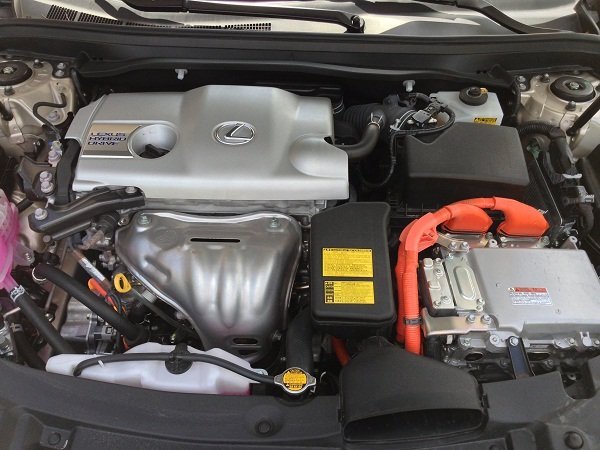 Upfront prices that are difficult to justify versus a non-hybrid equivalent are part of the hybrid experience, though – nothing new there. In fact, there’s an intangible value being missed in the equation I laid out above – the value to an owner of simply running a hybrid. It doesn’t make much sense on paper, but it’s pretty empowering to have a 500-mile range show up in the trip computer on a full tank – depending on driving habits, it could be weeks before your next fill-up. And that fill up will be regular unleaded, thank you very much – no pricey diesel or super unleaded required here. Absent are the tin can interior acoustics and general lack of power at any speed normally associated with hybrid ownership – while the 200 combined horsepower provided by the Lexus’ engine and battery/motor setup isn’t going to light up the front tires, it’s at least enough to move with the general flow of highway traffic. 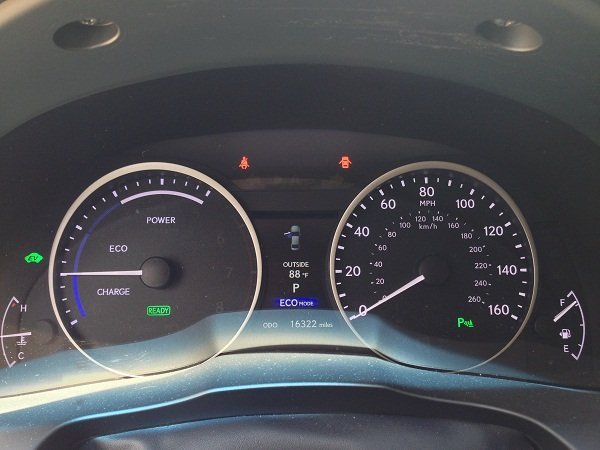 The ES300h’s three driving modes – Sport, Eco and Normal – provide different-enough settings of throttle and transmission response that you’ll actually get some use out of them. After a day or so, I decided to simply get with the program and embrace the Hybrid Way of Life ®, leaving the car to its own devices in Eco mode. When a bit more gusto is required underfoot, a quick toggle to Sport mode is all that’s needed. Interestingly, the Charge/Power hybrid meter to the left of the speedometer changes to display a traditional tachometer when “Sport” is enabled: a neat gimmick. Otherwise, there’s little inside to generate awareness of the ES300h’s method of propulsion. An “EV Mode” is on offer via a button near the shifter, but in most circumstances besides parking lot dawdling, any summoning of acceleration will relight the gas burner. And of course, rather than the traditional 6-speed auto in the ES350, the hybrid makes do with a CVT – it’s not especially drone-y, this combo, but the 2.5-liter four’s engine note is not an especially sonorous one, so you’ll probably want to spend less time near redline in it than with the 350’s sweeter six. 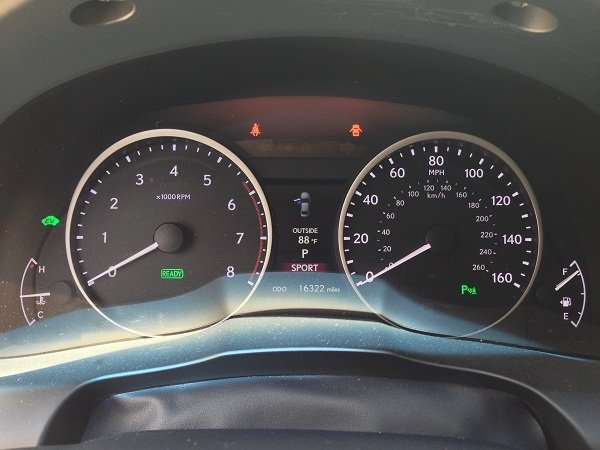 Otherwise, the driving impressions mirror the ES350 I sampled – subdued road impacts, a general lack of tire and wind roar of any kind, fingertip-light steering and an absence of chassis feedback, either wanted or unwanted. This makes it an ideal “luxury” ride for the types of drivers that want to get in, sit down, and be comfortably transported to the next stop using both a minimum of fuel and fuss. 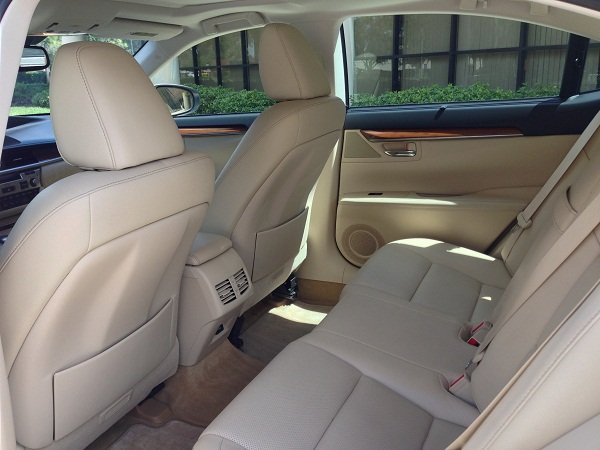