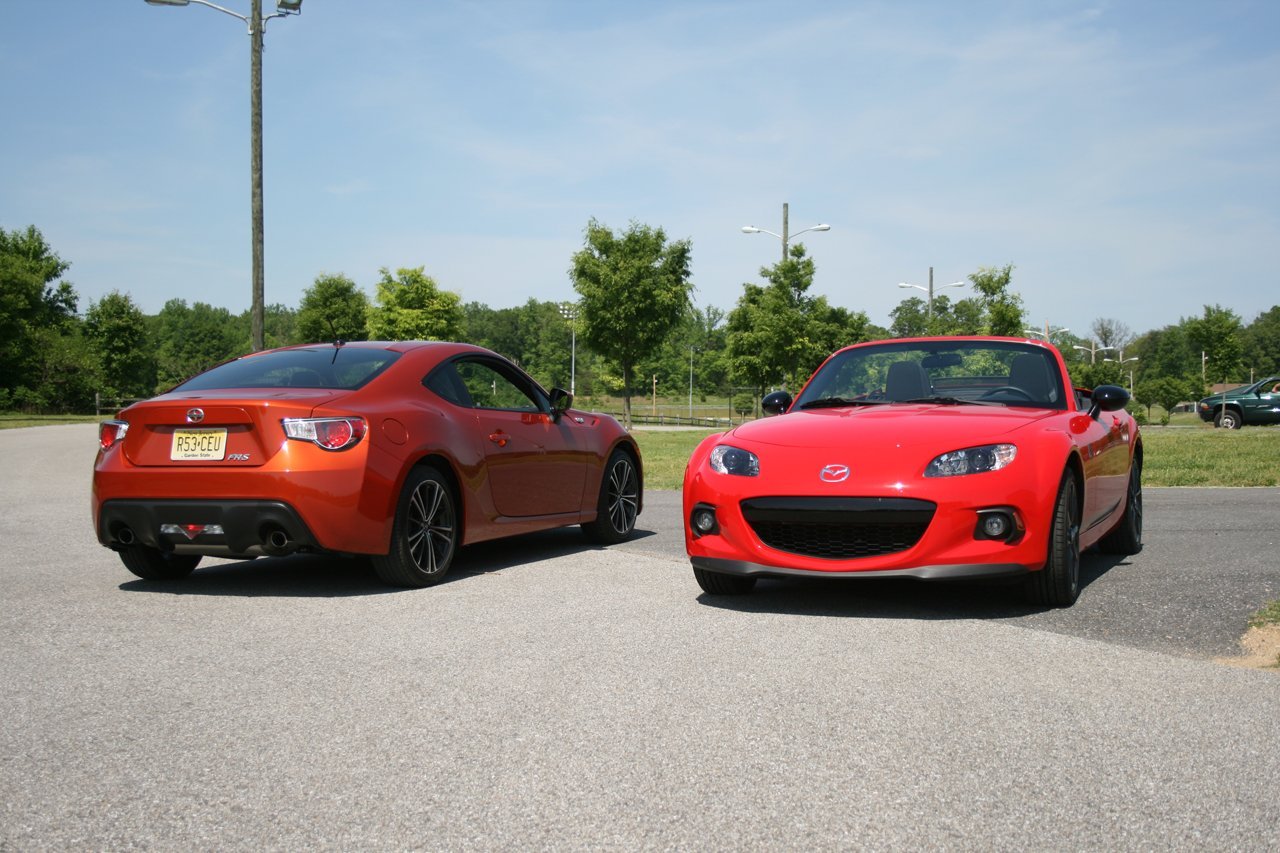 At the conclusion of my FR-S road test, I opined that we should be thankful for its very existence, as it functionally doubled the available choices in the almost-abandoned small sports car/coupe segment. The Brits are long gone. BMW hasn’t played in this niche since the Z3 (in the States, anyway) and Porsche since the 944. Nissan bailed on the U.S.-market S Platform in 1998. The S2000 showed up a year later and soldiered on for ten years, though it could be argued that ten years was a few too many.

Since the S2000’s demise, the segment has been largely stagnant. Oh, sure, the pony cars are still around and the Genesis Coupe has been on the market for a couple of years, but none of those can claim a curb weight under 3,000lbs. Don’t get me wrong: There are very desirable cars in this bunch, but lightweights they are not.

Enthusiasts can (read: frequently and vociferously do) argue about the context in which the FR-S should be judged, so let me just say this: If you want a Mustang, you probably won’t like the FR-S. If you want the FR-S, you probably won’t like the Mustang. They’re different cars for different people, and that’s that. The same applies to Miatas and S2000s and all the old “small bore” sporty cars. Shorter strokes for different folks, if you will. 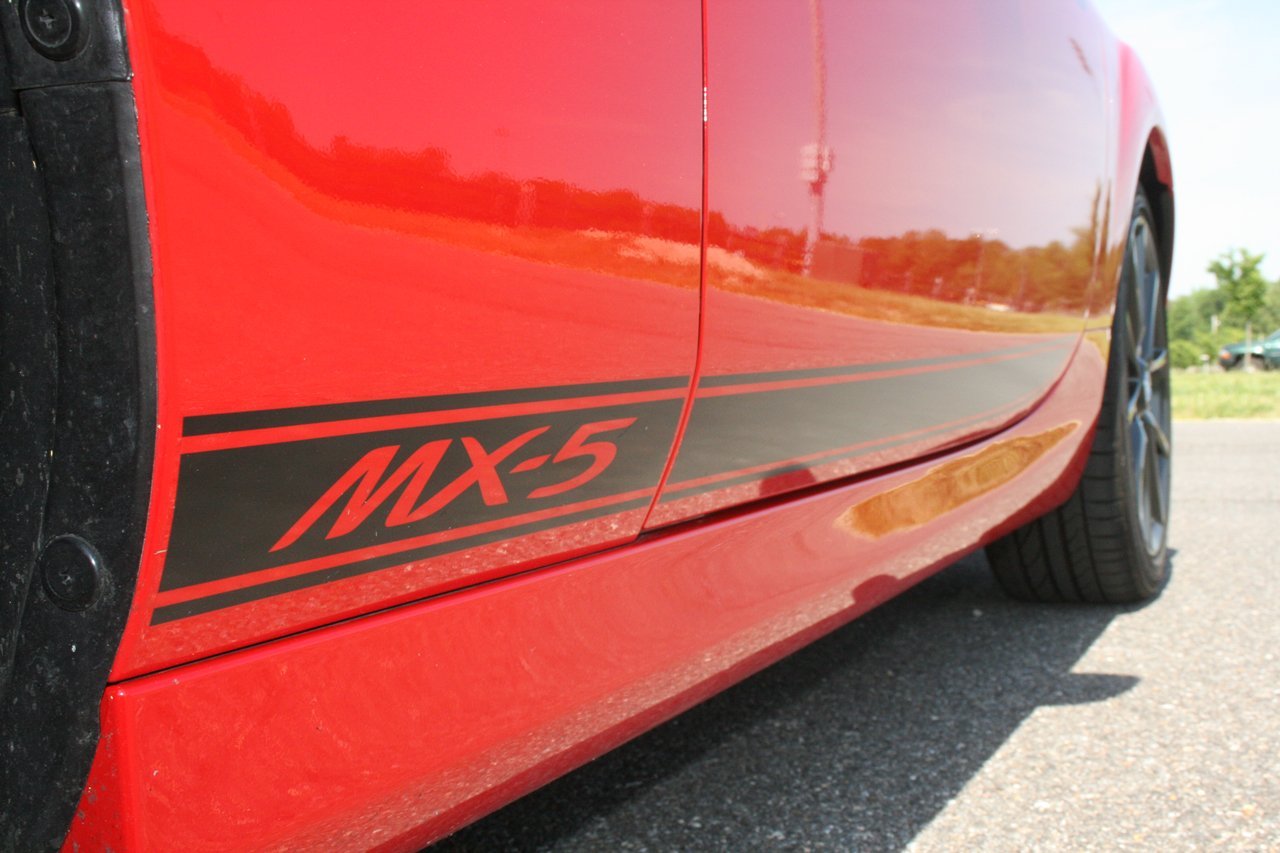 But when the conversation shifts to vehicles further down the power spectrum rather than up, there’s a little more equivalence, and that brings us to today’s test. Since we’re a small outlet, it’s rare that we do a straight-up comparison test here at SSL.  I’d love to tell you the story of how we moved heaven and earth to make this happen but, truthfully, we just got lucky. The weekend of my TrackDaze outing with the FR-S just happened to be the same weekend as a MSCW autocross event, and the MX-5 just happened to be available. Jackpot.

Street and track impressions of the FR-S are available elsewhere on this site, but let me briefly describe the MX-5 as a day-to-day automobile: It’s small, it’s loud, and it’s always on.  Unlike the FR-S, which benefits from a longer wheelbase and more mass, the Mazda is raw, raucous and unapologetic. The Club comes with a boomier exhaust than a stock MX-5, and you hear it both on and off the throttle. It’s not that it’s obnoxious; in fact, it’s downright pleasant to listen to when you’re on it, but it’s constant. The FR-S, on the other hand, is quite docile when you’re just bopping around town. Oh, it’ll get kinda loud when you open it up, but loud is not the default.

There’s more to it than the noise, though. The MX-5’s aging two-liter engine only makes 178hp to the Scion’s 200, and thus needs more aggressive gearing to keep it in the powerband. The Miata is never completely off the boil. Where the FR-S will feel flat out of a corner if you’re a gear too high, the Miata will enthusiastically claw its way back up the rev range in short order. It’s as if the FR-S is punishing you for your obviously deficient driving style, whereas the MX-5 just wants to cover the boring stretch before the next corner as quickly as possible so you can mess it up again. It doesn’t care how poor your execution is so long as you’re having fun. 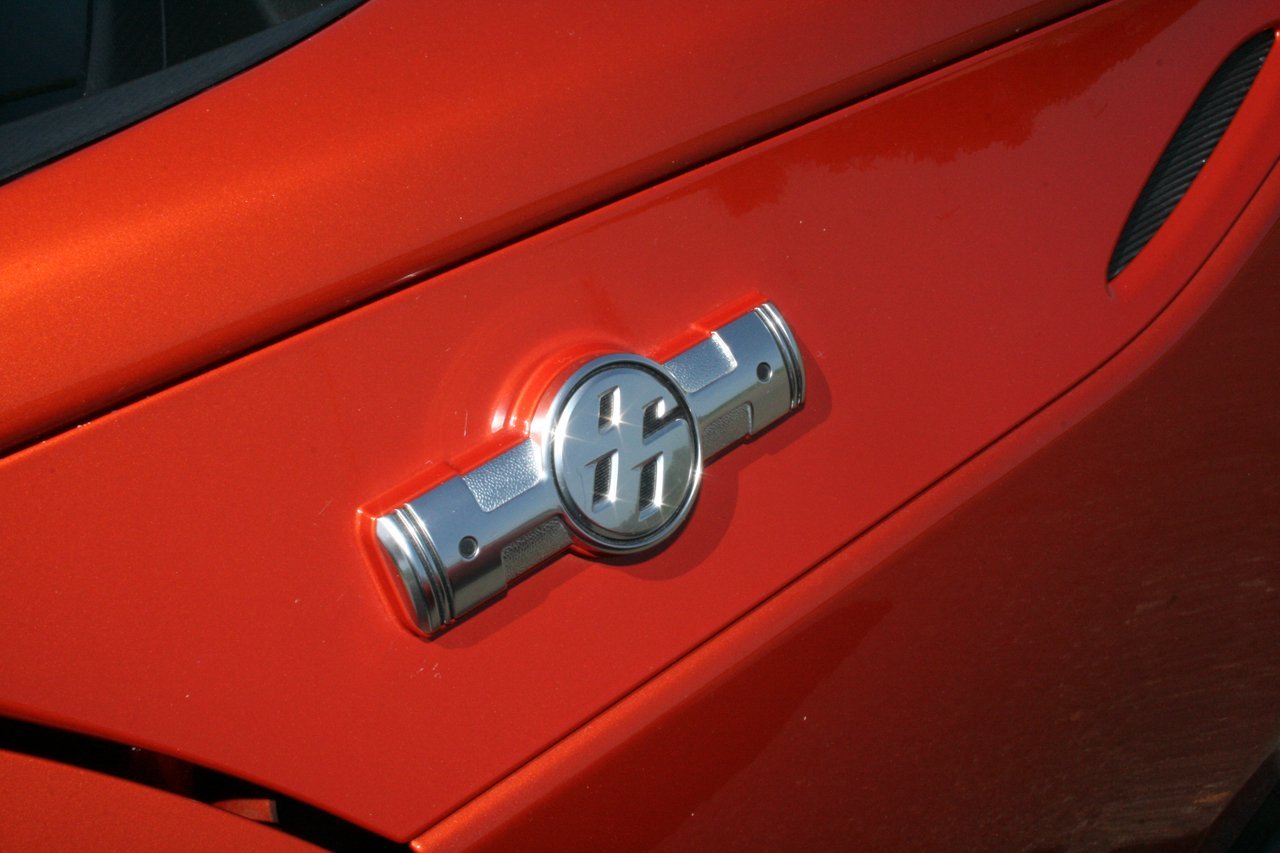 But where the Miata is more willing, the FR-S is ultimately more capable. It corners flatter, turns in more aggressively, and when driven properly, will pull out of corners with more authority. It’s not as fun or as flamboyant as the MX-5, but it is objectively quicker and more confidence-inspiring.

So, what happens when we get them both between the cones? Well, let’s put it this way: If you’re counting on this review to make your decision for you, you’re likely going to be disappointed.

MSCW breaks their autocrosses into morning and evening events. We signed the MX-5 up for the morning and the FR-S up for the evening. MSCW’s courses are notoriously short (I managed a ~33-second finish in a CX-5 at a MSCW event last year, for context) and easily memorized. MSCW is primarily a Miata owners’ club, so it’s no surprise that their courses tend to be on the tight and technical side. Advantage: well, neither, really.

We started off the day with the MX-5. The Miata was predictably adept through the cones. The stock tire on the Club model is Bridgestone’s RE050A: a favorite of Mazda’s when it comes to sporty cars. It’s a very sticky, low-treadwear summer tire with excellent early-life cornering ability and fantastic turn-in characteristics. A half dozen events like this will turn a set of them into hockey pucks, but this car clearly hasn’t seen anything of the sort. The Miata’s best run was a 29.875. 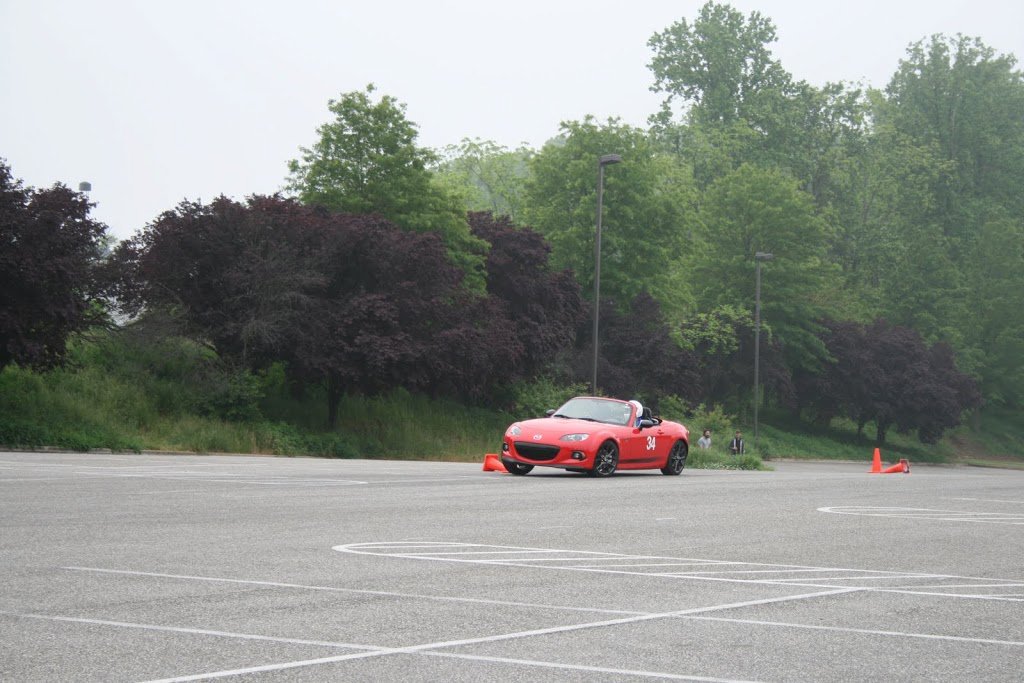 I fully expected the FR-S’s cornering prowess to be diminished by the previous day’s lapping at Summit Point, but I was pleasantly surprised to find that it didn’t seem to be any worse for wear in the lateral grip department. The FR-S still felt clinical, rolling very little and maintaining an overall composure that the MX-5 just can’t match. I found 30s quickly in the Scion, but couldn’t quite muster up a clean enough run to best the MX-5 in my first set of runs. I worked timing for the flip side of the heat and checked through the afternoon results. Based on what other drivers were doing in carry-over cars from the morning, it seemed the surface was around 7/10ths quicker. The course could support faster times, but I was going slower. Bad news for the FR-S.

When I got back into the Scion for my last set of runs, I treated it as a reboot, taking one off-pace lap to re-program the turns, and then went full-bore for the remaining three. It worked. The first quick run was a 29.651, two-tenths quicker than the MX-5’s best. The second? 29.686. The money run? 29.453. Three straight runs of significant improvement. 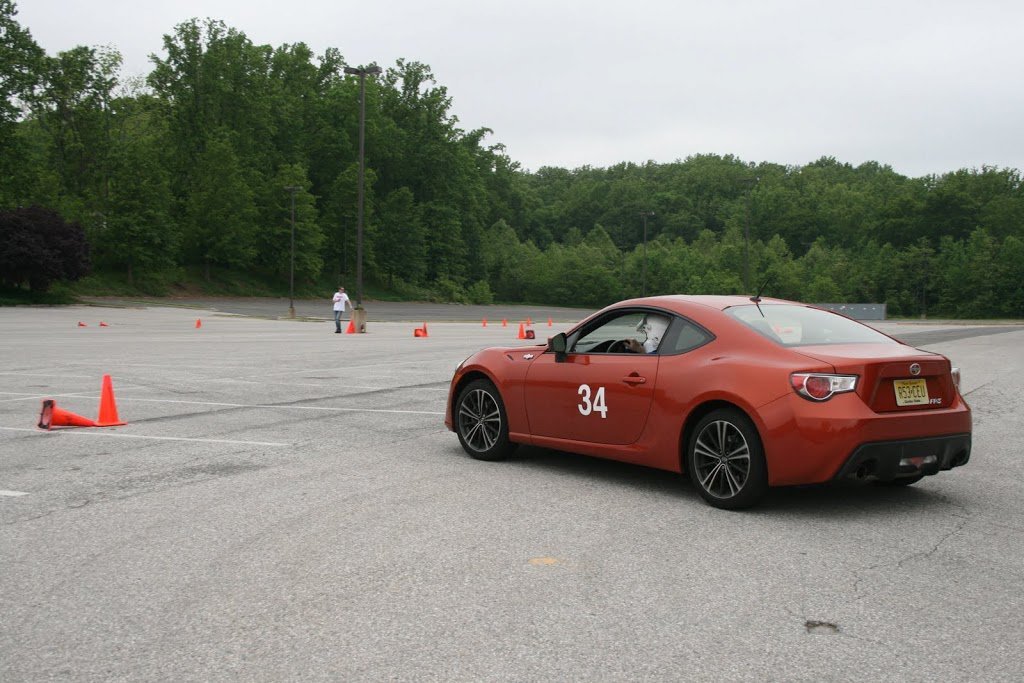 The books will show that on that day, the FR-S was four-tenths quicker, but four-tenths quicker on a course that probably should have given up another three if the two cars were equally matched. Was the FR-S faster, or was I faster? It’s a question I’ve asked myself several times since, and I don’t have a satisfactory answer.

But in my mind, there is a clear winner here. Allow me to explain.

The FR-S is a good car, but it’s an imperfect one, and perhaps deliberately so. It’s Toyota’s first foray back into the affordable rear-drive segment in decades, and it delivers on everything it promised. But a lot of what was promised was, well, promise. The FR-S is a canvas upon which a masterpiece will undoubtedly be painted, but for now, it’s up to the buyer to apply the strokes—to add the big brakes and the stickier tires and the various bolt-on doo-dads that will bump the power up to pony-car-challenging levels. 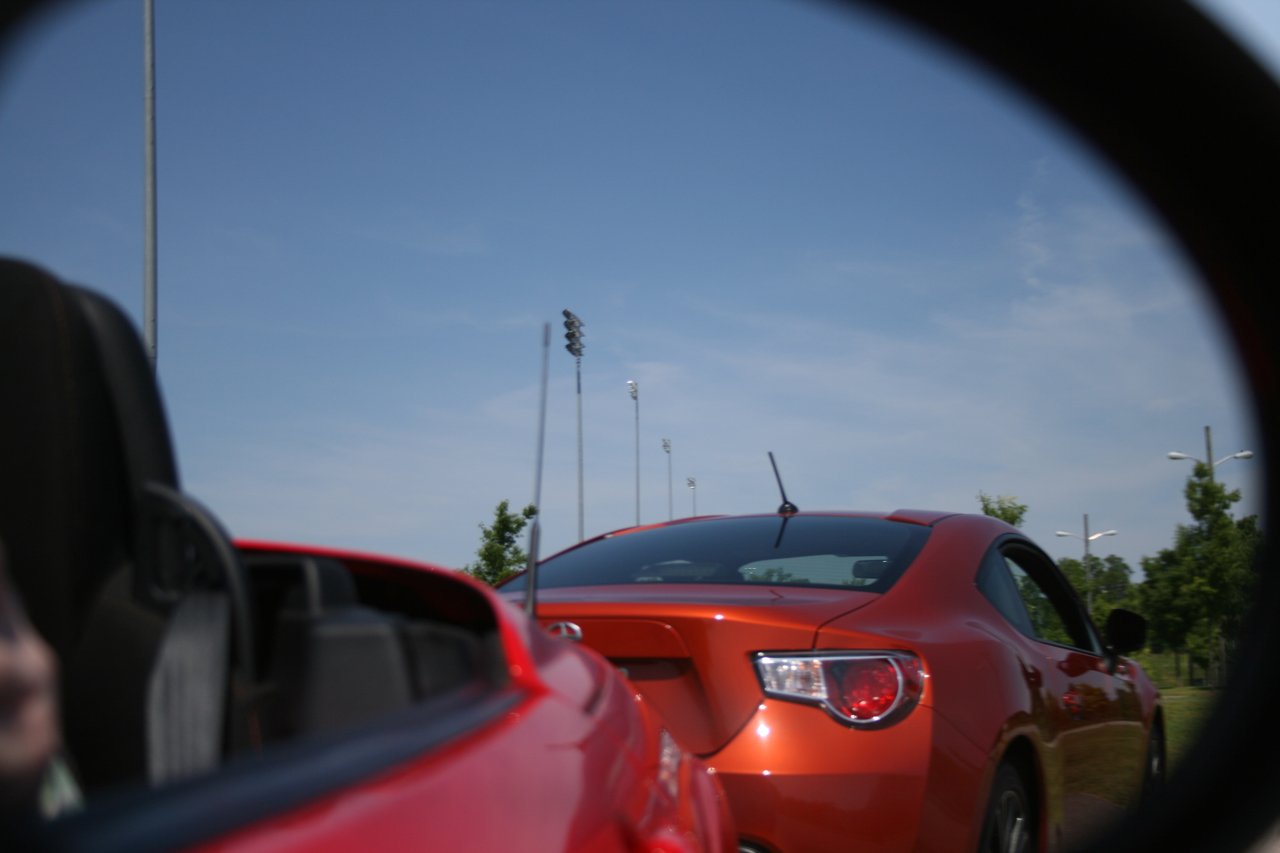 The MX-5 Club is a picture already painted. It may not be the greatest work of art, or the most expensive, or even the most expressive or most desirable, but it is finished. It is the swan song of the third generation MX-5, and it feels every bit the culmination of eight years of lessons learned. It’s a complete car—a complete experience.

And that’s why my money would buy the Mazda.

Toyota and Mazda provided the vehicles for the purpose of this comparison. Big thanks to the Mazda Sportscar Club of Washington for providing the venue for this comparison.