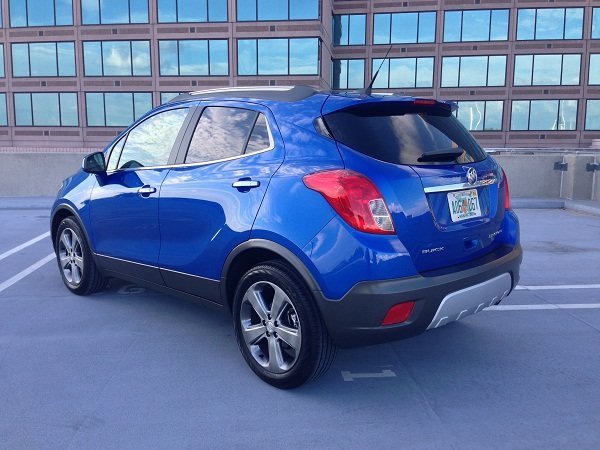 “Engineered in Germany – Manufactured in Asia” might be a good tagline for the advertisements of Buick’s new compact baby, the Encore. It was conceived as the funky Opel Mokka, and is sold under that nameplate in Europe. With GM interest in the Chinese market strong, a manufacturing base there and in nearby South Korea seems a well-thought-out plan, so that’s what GM executed. As Opel’s unofficial stateside dealer network, Buick picked up the ball and ran with it – marketing the Encore toward urban young professional female types who want strong feature content in a small and upright package. The Encore I drove delivered on those counts, being both quite compact and imbued with feature content that wouldn’t be out of place in a vehicle a few size classes up.

Sound good? If you live in Kansas and are thinking of purchasing your own Buick, you can reach out to this Wichita Buick Dealer for a closer look. 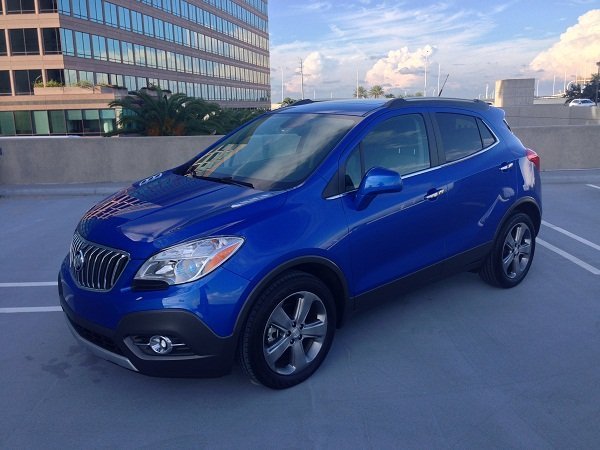 I was struck immediately upon greeting the Encore for the first time (Encore for the first time?) by its diminutive stature – parked next to a Dodge Ram in the parking lot, it looked positively Lilliputian. It never feels left wanting for size on the inside, however – a bolt-upright stance lends it impressive headroom and stretch-out space, and its continental engineering influence is felt in a utilization of space and numerous storage bins and cubbies. That German influence is also felt in the infotainment system – it can feel hopelessly frustrating at first use, with the knobs and buttons used to navigate our tester’s myriad functions seemingly labeled in a dead language. But, like BMW’s first iteration of iDrive, what first frustrates eventually becomes second nature – suggesting that fumbling journalists like me with limited seat time are at a disadvantage compared to owners, who will quickly pick up the system’s nuances and adopt them as their own. 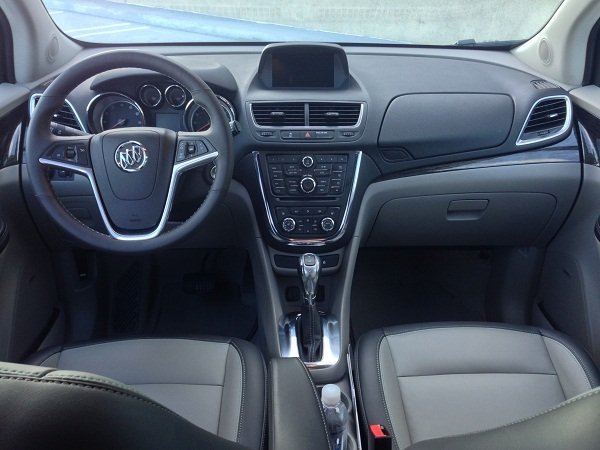 The rest of the interior is comfortable and well-designed, the Opel-Buick design language plainly seen in the center stack layout and dials – they could be right out of an Opel Astra, and in fact, probably are. It’s a pleasing turnaround for the once-aging Buick nameplate, since not so long ago their cars were more likely to feature turn-signal-on warning chimes than anything vaguely resembling German design. Based as it is on GM’s subcompact Gamma II platform, which also underpins the Chevy Sonic and Spark, the Encore’s ride and handling compromise feels understandably “small car”. The ride is mostly smooth and serene, but the center of gravity is high, and very choppy pavement can upset its balance. 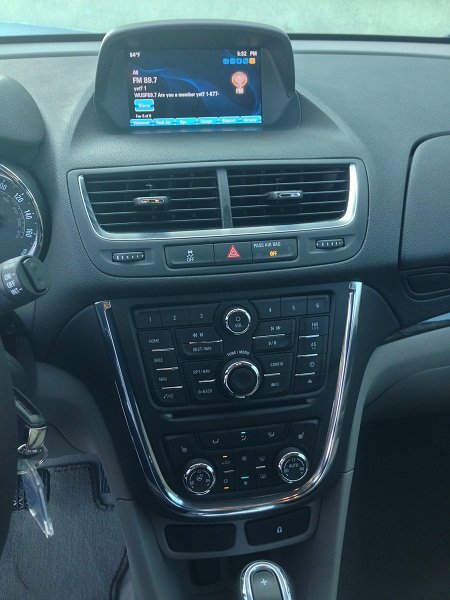 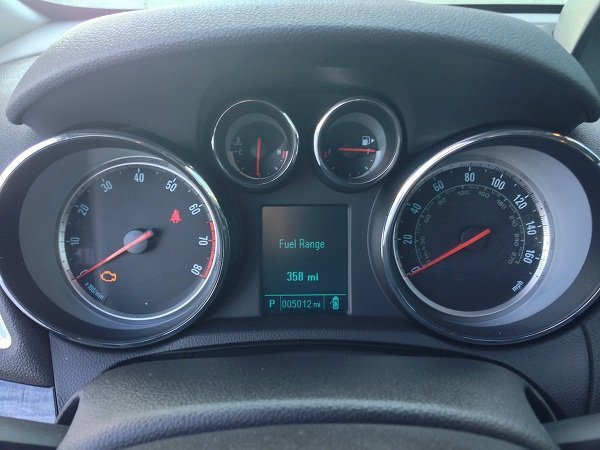 The Sonic’s optional 1.4-liter turbocharged four and six-speed automatic transmission pull double duty in the Encore as the only available powertrain combo. With 138 horsepower to haul 3,190 pounds, you can probably deduce that the Encore is no speed demon. Surprisingly, though, the four-cylinder doesn’t feel strained – a deep prod of the throttle will indeed ring it out to a ragged redline but more often than not, a gentle right foot will be enough to rely on the pint-sized turbo’s torque swell to bring you in line with faster traffic. The small four’s benefit is seen at the gas pumps, where I was able to extract nearly 29 miles per gallon without resorting to any hypermiling techniques, or even really trying. That will be a huge benefit to the folks in Buick’s target market, who may be able to afford a larger car but don’t want to feel the pain at the gas pump for it. The Encore accepts regular grade, too, which is appreciated. 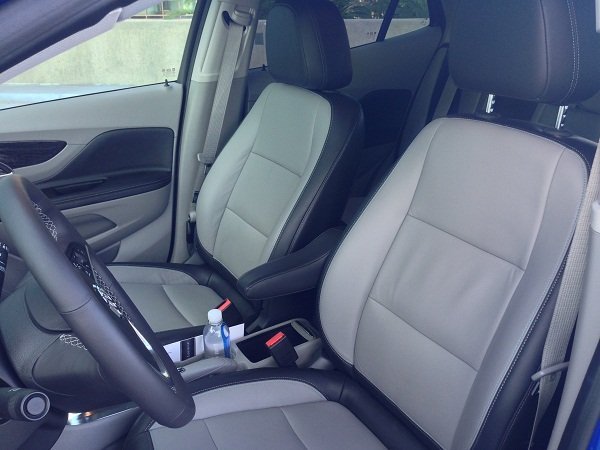 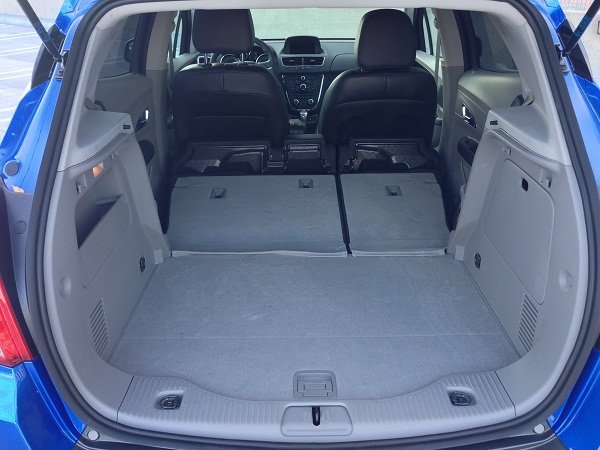 Driving dynamics will probably not be of the utmost concern to potential buyers, who might be cross-shopping against other small crossovers, tall-box wagons, hybrids or midsized sedans. It’s hard to line up one competitor that closely mirrors the Encore’s size, feature content and underpinnings, but the VW Tiguan and Mazda CX-5 will probably speak to similar buyers, despite being a size class up on the Encore. Features for money is the name of the Buick’s game, and to that end, our “FWD Leather Group” tester came pretty well loaded for a sub-$30 grand price tag. A quick scan of the Monroney shows heated, power, leather seats with memory, remote start, a heated steering wheel, navigation and Bose sound all included. Tack on the added value of 4-year/50k bumper-to-bumper and 6-year/70k powertrain warranties, which are rare in this price class, and some buyers are certain to be swayed from more mainstream nameplates. 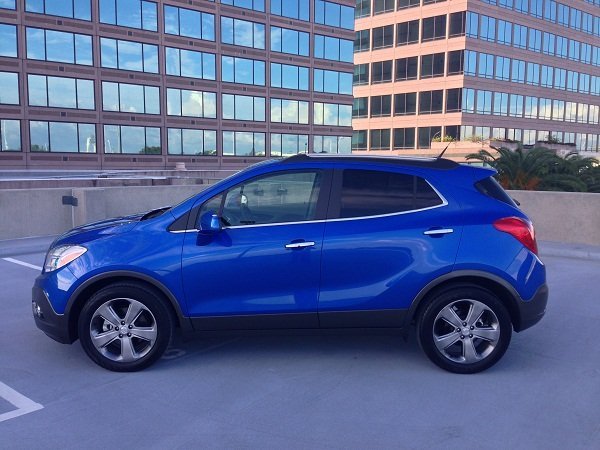 One also can’t overlook the Encore’s cutesy charm – its target demographic is likely to list styling high on the list of priorities, and the Buick’s “not-styled-like-the-box-it-came-in” profile is a clear advantage over the larger, more practical, more demure styling of its family-friendly CUV competitors. While certainly not positioned to be the next Honda CR-V of the sales charts, the Encore represents a toe in the water of a new market to Buick, one it hopes will beat a path to dealers doors that haven’t been opened in a long, long time.

Buick provided the vehicle for testing purposes and one tank of gas. Photos by the author.