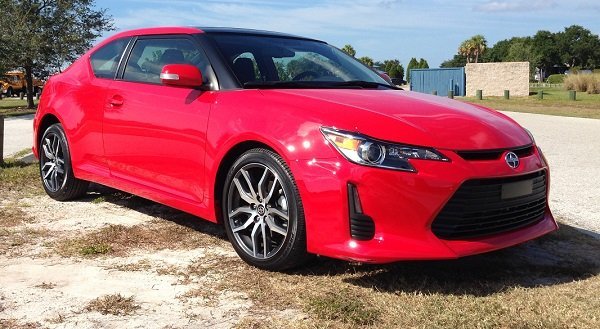 The original Scion TC came to prominence in 2005 right around the time my youthful interest in front-wheel-drive sport compacts had started to wane, so I never really gave the little hatchback much attention. I had friends that purchased and loved them for many years, but I always brushed it off as an also-ran in a sea of competent small coupes. That sea has gradually turned into a puddle, with more and more two door compacts falling by the wayside in favor of boxy hatchback shapes or proper four doors. The Chevy Cobalt, Acura RSX and Mitsubishi Eclipse have all since been put out to pasture, leaving a compact coupe buyer just a handful of options – the two-door versions of the Civic, Hyundai Elantra and Kia Forte. And, of course, the refreshed 2014 TC you see here. 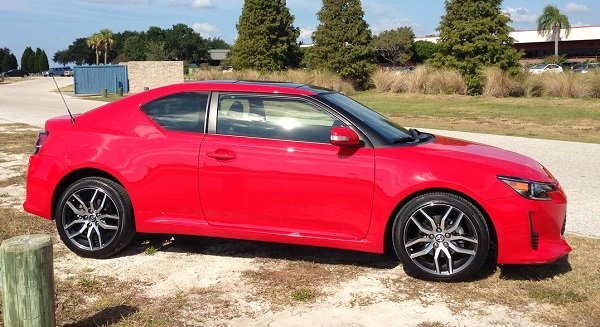 Without having the other cars directly at hand, it’s hard to easily compare the Scion to them, although the numbers tend to stack in the TC’s favor when you line them up on paper. The Scion has always played in a different dynamic universe than the s’coupe class benchmark Civic Si, so while looking the part and being similarly priced, we’ll let the Scion bow out of that street fight for now. That leaves the Civic EX to do battle with the Scion, as well as the Korean “twins”, the Elantra SE Coupe and Forte Koup SX. Equipping them all with an automatic over standard-issue stick shifts brings their MSRPs within a remarkably narrow spread – just $1,115 separates the priciest in the group, the Elantra SE, from the cheapest, the Forte Koup SX. I find it interesting that despite being remarkably similar and built by the same parent corporation, it’s the more powerful Kia that trumps its Hyundai sister in the value department. 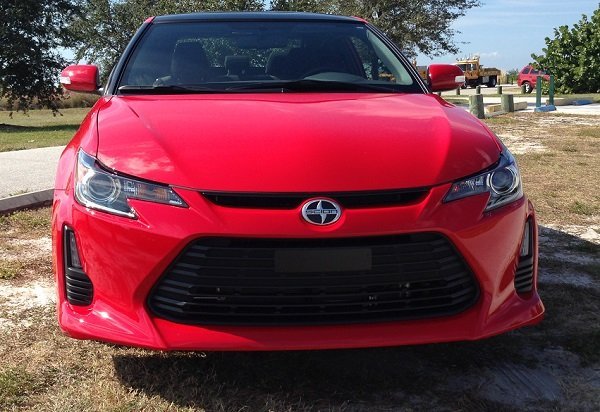 The Forte Koup plays closely against the Scion’s strengths, too – namely horsepower- which at 173 is only six fewer than the TC- and torque, lighter by just five lb-ft at 168. All except the Civic boast six speeds in their automatics; the Civic makes do with five. Feature content is similar across the board – Bluetooth, alloy wheels and power everything comes standard, while navigation remains optionally available on all – but fuel mileage favors the two 1.8-liter cars (Civic and Elantra) with highway ratings that hover near 40 mpg. The “big-bore” 2.4-liter Kia and 2.5-liter Scion – which tips the scales over 200 pounds heavier than the next-portliest Forte, at 3,124 – both achieve EPA ratings of 23 city and 31 highway. I saw a pretty-good 27 mpg overall during my week with the TC. 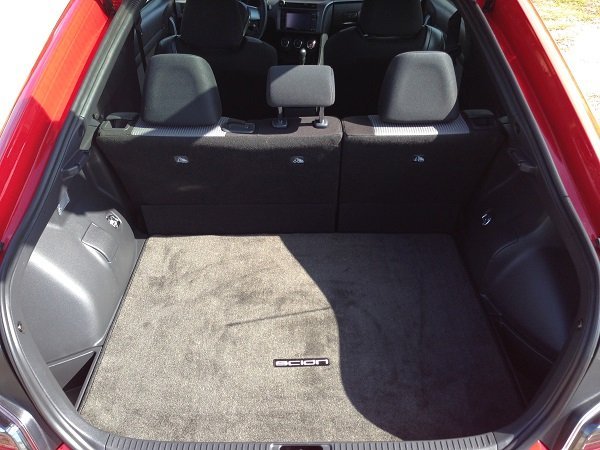 In its competitive set, it’s obvious the Scion hopes to occupy the “sporty” end of the scale with the Koup SX nipping at its heels, while the Civic and Elantra seem happy to occupy any sorority house or nursing college parking lot that will have them. But does it fulfill that sporty promise? From the outside, it certainly offers more than a whiff of the tuner-friendly vibes that these cars seem to attract. I always admired the second-gen TC for its semi-Teutonic “Audi TT left in the sun” presence; a wide bulldog stance and chunky C-pillar made it look quite substantial for its price. However, the redesigned 2014 edition has done away with some of that solidity in favor of squintier headlights, a gaping front air intake, and a few more creases and curves found elsewhere around the car. I’m not sure if the look is any more successful, but it will no doubt offer more to buyers who found the second-gen cars too plain-looking. 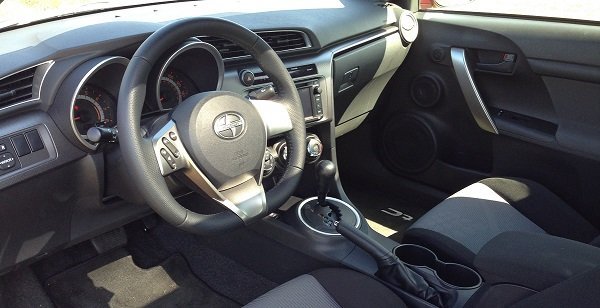 Out on the road, the TC continues the theme of looking more hard-edged than it is. Road imperfections are handled without drama, but the placid ride comes at the expense of cornering precision. Electric power steering eliminates any road feel, as is so often the case with these systems, but at least it doesn’t load and unload unnaturally through corners – effort remains progressive at all times. Low-end power and torque are ample, and the 2.5-liter four isn’t exactly a rev-happy screamer but nor is it a rough paint-shaker. In the 2014 TC, Toyota Scion took efforts to make the 6-speed automatic more engaging by endowing it with quicker shift speeds and a downshift rev-matching system similar to that on offer in the automatic-equipped FR-S. Its presence isn’t that noticeable until you take control of the shifting yourself, and even then, without shift paddles the driver’s connection to the drivetrain lacks much immediacy. It does succeed in making downshifts under a trailing throttle quite smooth. 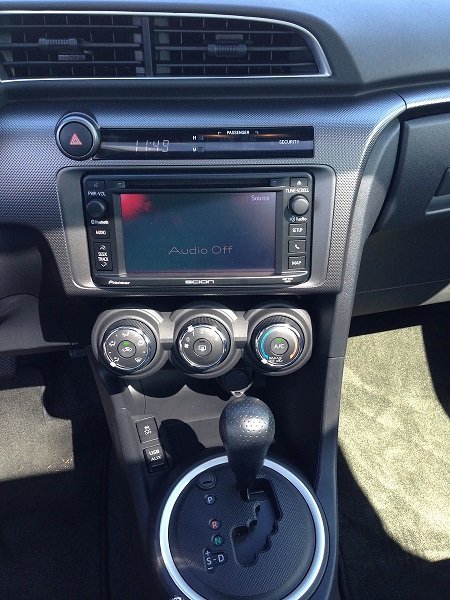 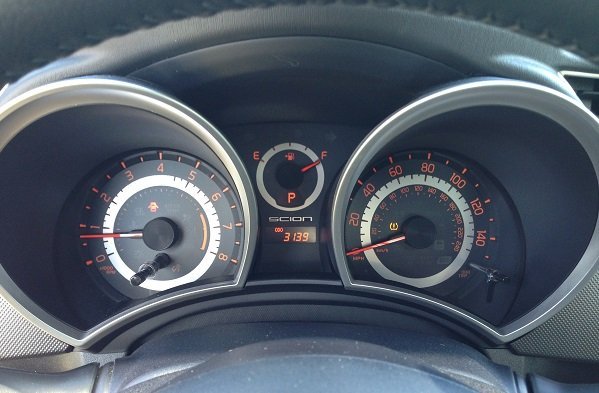 The 2014 TC continues to make its way in the world by offering buyers interested in a sporty appearance a package that delivers an unobtrusive driving experience. It’s devoid of the frustrations that most of us enthusiasts are willing to put up with in exchange for a more direct connection to the road. That it doesn’t excite those of us who’d be more inclined to choose an FR-S over it probably doesn’t matter; after all, we are fortunate enough that Toyota Scion offers us the option. The TC continues to be what most manufacturers have refused to offer: an inexpensive, front-wheel-drive two-door coupe offering more visual verve than its four-door counterparts while still being comfortable and practical enough for most buyers to feel like they haven’t compromised for a bit of style. 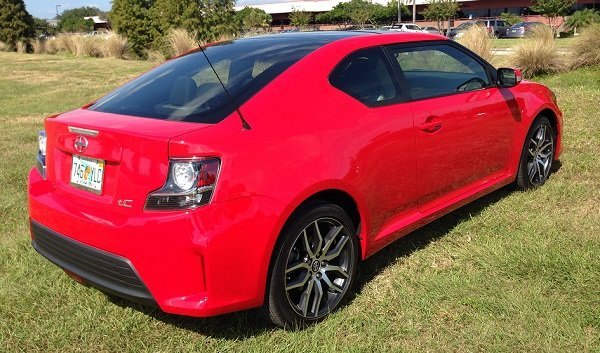 Scion provided the vehicle for testing purposes and one tank of gas. Photos by the author.