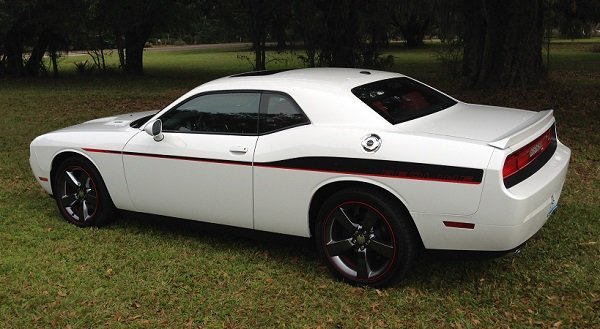 I always relish the opportunity to test different iterations and trim levels of the same model, perhaps because it helps me determine whether the inherent goodness (or badness) of a given car is innate, or limited to a specific loaded-up example. In the case of the Dodge Challenger, my experience with the model line had thus far been limited to the full-fat SRT8 392 model with 470 horsepower and 470 lb-ft of torque. I thoroughly enjoyed that car, loaded as it was to a near $50k price tag, but would its core values be retained in the 95-horsepower-tamer R/T Coupe? Only one way to find out.

Visually, there isn’t a whole lot to separate our R/T Plus from that SRT8 – especially with our test car equipped as it is with the Redline package, which adds body-side stripes, 20-inch graphite-chrome wheels with red-painted lips and barrels, and a color-accented grille. It’s still got the same throw-back ‘70s silhouette and most of the SRT8’s character, lacking only a pair of stripes and a wider chin spoiler and wheel package to match it. Inside, there’s less visual drama in the R/T, as the heavily bolstered suede-trimmed seats and flat-bottom steering wheel of the 392 are conspicuous by their absence here. The Challenger’s interior remains a comfortable and roomy, if plainly styled, place to spend lots of highway miles, though. 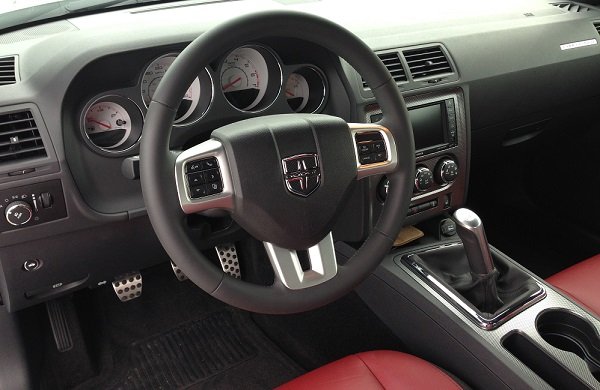 You’ll spend more of your time on the highway and less time behind a gas pump in the R/T, since although they share an identical 23mpg highway figure, we saw an improvement of 3 mpg overall from the SRT8’s mileage during our time with the R/T. Fuel economy isn’t a consideration to most muscle car buyers, anyway, so how does it do the swagger thing that’s so well-embodied by its big brother? Pretty well, actually. Clutch effort and take-up are easier in the R/T, but the pistol-grip shifter still moves through its gates with the same weight and tenacity as in the 392-cube coupe, and it also shares the prodigious low-end torque that seems missing from the smaller Mustang and Camaro pony cars.

It’s always been the Challenger’s more relaxed demeanor that encourages you to find top gear and loaf along the highway at a steady 80 mph until you reach the horizon, the Hemi turning just 1900 rpm at that speed. It’s a relaxed cruiser, the R/T, and far more interested in tackling wide-open highways than the condensed switchbacks the Camaro SS and particularly the Mustang GT are more adept at. The Mustang will entertain you more on a winding road, but the Challenger is better suited to tasks like carrying four people and cargo in comfort. 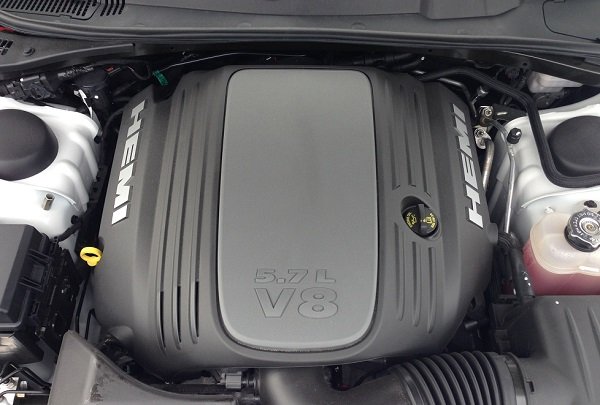 Buried in the R/T’s gauge cluster functions is a 0-60 mph timer. On a deserted stretch of road, we gleaned a best of 6.1 seconds to 60 – that doesn’t sound like much to write home about, and indeed it does lag its V8 competitors, but it’s likely down to the short first and second gear spacing that requires a time-consuming shift to third to hit the magic sixty. Were we hell-bent on destroying the clutch, we probably could have eked out a few more tenths, but as it stands, that number has very little to do with how plentiful the Hemi’s torque spread feels out on the road. You could waft away from every traffic light in third if you felt like it- such is the pulling power from the 5.7-liter V8. Even in 5th from around 40 mph, there’s enough shove to render a downshift unnecessary.

You’ll need that pulling power to make it out of tight corners, because the R/T’s chassis feels noticeable less nailed-down than that of the SRT8. Credit softer springs and struts, responsible for a more serene ride, but there’s also more body roll and understeer on board than in the SRT-tuned 398, or the lighter Mustang GT. Nevertheless, mid-corner oversteer remains an option whenever your right foot dictates, especially in the wet – this R/T on 20” all-season Firestones proves as hilariously tail-happy as its 1970 forebear. The brakes offer enough stopping power to bring the R/T’s full two-plus tons of real estate to a reassuring halt. The R/T lacks the multi-piston Brembos and slotted rotors front and rear that our SRT8 392 had, but pedal feel is still nice and firm, though we weren’t able to test fade resistance. 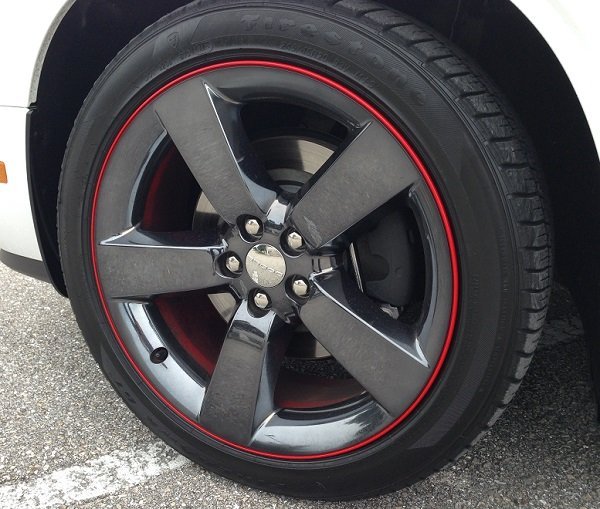 The Challenger is the unlikely offspring of a marriage between leftover Mercedes-Benz chassis parts and a pushrod, large-displacement V8. That combination probably sounds a little like a relic in today’s fuel-economy and emissions-crazed regulatory environment, and maybe it is. Detractors of the Challenger have opined from the outset that its modern day pony car rivals are lighter, faster and better handling. To pencil the Challenger into the same space as the Camaro and Mustang is to somewhat miss the point. Though it occupies similar market territory, the Dodge has always been more about combining the visceral sounds and sights of the muscle car era with roominess and comfort not offered by its competitors. The R/T offers a throwback driving experience to match its throwback looks, just as its burlier SRT8 brother does, albeit with a little less swing in its step. The sights, sounds and moves these manly Challenger coupes produce are different from just about every car on the market currently. We’ll certainly miss them when they’re gone. 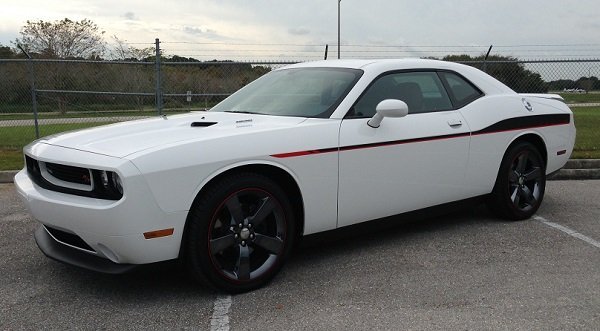