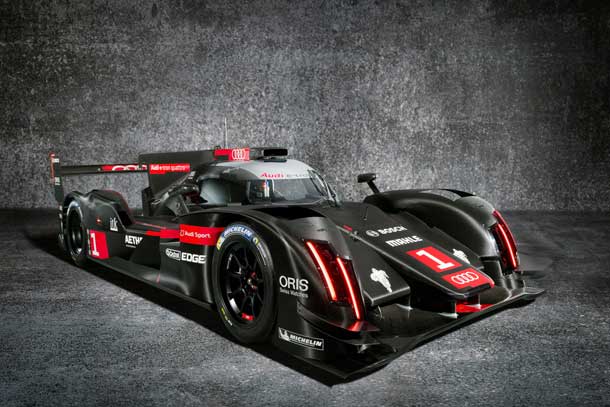 Audi Sport has pulled the covers off the 2014 spec R18 e-tron quattro after a week of heavy testing at Sebring International Raceway. While the name is the same as the current Audi LMP, the 2014 spec R18 is a huge leap forward in prototype design for Audi. Audi says the 2014 R18 e-tron quattro  is the most complex race car they’ve ever built, and furthers the development of the successful WEC and Le Mans winning R18.

This new R18 has been designed to comply with the new 2014 FIA WEC LMP1 regulations which have changed substantially from previous regulations. The goal for the new regulations is one that promotes greater performance with less energy consumption, while at the same time giving Audi engineers greater technical freedoms to innovate.  These new regulations incorporate changes to powertrain rules, body dimensions, aerodynamics, and safety.

Audi says the new R18 e-tron quattro will use up to 30 percent less fuel than the predecessor, thanks to the updated V6 TDI engine and ERS-K Energy Recovery System Kinetic. Audi was previously using a Motor-Generator-Unit which recovered kinetic energy at the front axle under braking into a flywheel storage system. In this new version of the R18, the turbocharger is linked to an electrical device which converts thermal energy from the exhaust gas into electric energy. This extra energy is stored in a flywheel storage system and can be used at the MGU at the front axle or to the electric turbocharger.

Aerodynamically, the new R18 is 10 centimeters narrower, meaning the entire body is smaller. Audi says this gives the aerodynamic advantage of being able to run narrower wheels, as well as a slimmer underfloor, resulting in reduced aerodynamic drag. The new R18 sits 20 millimeters higher and has a larger cockpit than the predecessor. The front wheel cutouts have been changed, resulting in a smaller area to produce downforce. Rather than a diffuser up front, the new R18 has a front wing with flaps which results in aerodynamic advantages and a lower cost. Rather than having to produce unique front bodywork for each track, Audi can now simply adjust the wing to suit the conditions. While designers were given some additional freedoms in designing the aero for the new R18, restrictions have been placed on aerodynamic design at the rear. Cars can no longer use exhaust gasses over the rear diffuser, as seen in the 2013 R18 e-tron quattro.

Safety has been enhanced by giving the new monocoque a higher load rating and has reinforced it with additional layers of fabric. Wheel tethers are now mandated, and connect to the outer assemblies of the front wheel suspension and monocoque with the rear wheels being tethered to the rear suspensions and chassis structure. Each of the two tethers per wheel can withstand a force equivalent of nine metric tons. There is also a new energy absorbing crash structure behind the transmission.