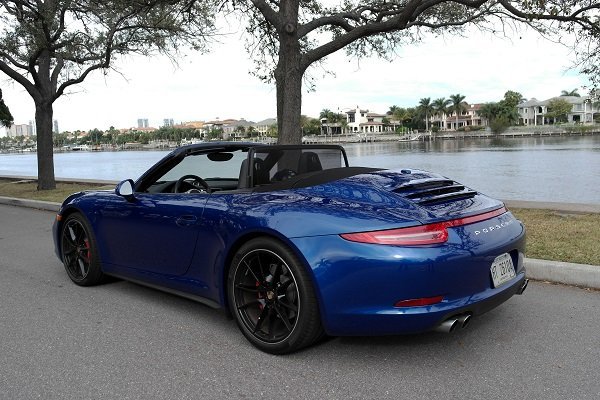 The 911 has been tapped as the everyday supercar for quite some time now, ever since the 1970s when the Turbo version of the Carrera upped the ante in terms of usable performance without the supercar price tag or stigma. The Turbo was soon split off into its own subgenre of 911, but the Carrera in its various forms has been the main bread winner for the 911 line for some time. There are eight Carrera variants currently, and right at the top of the heap is the model you see here – the Carrera 4S Cabriolet. Featuring 400 horsepower, all-wheel-drive, a 0-60 time of 4.1 seconds and a roof-to-roofless time of 13 seconds, it’s got near-supercar stats. And with our tester’s $150,750 sticker, a near-supercar price, too. 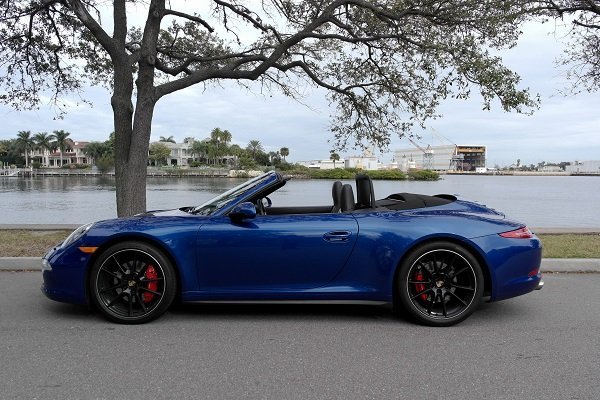 As ever with Porsche, God is in the details – and depending on how detailed you get with the option sheet, it’s not too hard to edge the C4S Cabriolet’s $118,480 base price skyward. Among the options fitted to our car, most essential are the PDK transmission ($4,080); the Sport Chrono Package, which includes such niceties as dynamic engine mounts and launch control ($2,370); and finally, the Sport Exhaust System, which creates such nirvana-inducing exhaust crackles under a trailing throttle that its $2,950 price tag comes off like the bargain of the century. 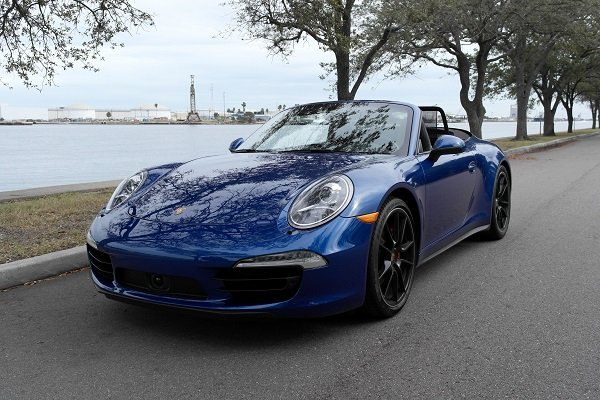 Those options alone will enable you to hit the Porsche-quoted 4.1 second sprint to sixty, though in all actuality a real-world time of less than 4 seconds is likely, given the manufacturer’s propensity to pad its acceleration numbers in the interests of modesty. On the road, the Carrera 4S feels plenty potent, and thanks to the combination of mellifluous exhaust howl and refined, whip-crack shifts from the excellent PDK dual-clutch transmission, the 911’s powertrain remains special even in a world where 420-horsepower Mustang GT rental cars are commonplace. 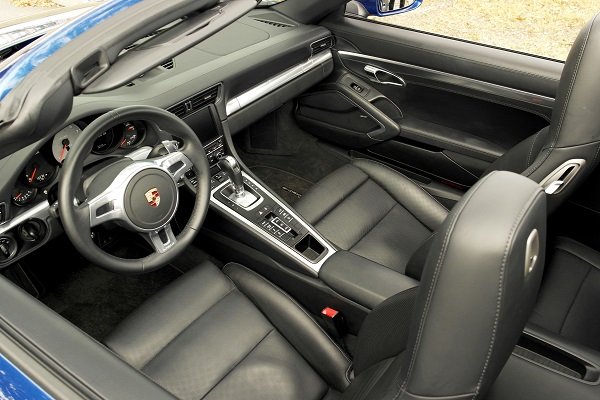 As a car skewed toward the sporty end of the grand touring spectrum, the Cabriolet fulfills the promise of 911 handling and responses without issue. Our car was equipped with Porsche Dynamic Chassis Control, which eschews the standard-issue electronically adjustable dampers (known in Porsche-speak as PASM) and calls on hydraulically-linked active anti-roll “bars” to minimize squat, dive and body roll all while keeping the ride fairly civilized. To say that it provides a huge difference in character would be a fib; I didn’t have a standard PASM-only-equipped 911 to compare it against. 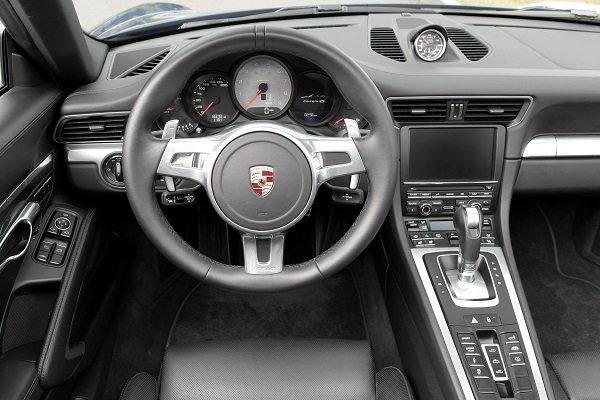 However, the way this 4S went around corners as if tethered by high tensile steel cables to the apex is a close indicator of the talent of its onboard chassis systems. The 4S simply refuses to become unstuck on dry pavement at any sane or extra-legal speed, a combination of its polished active suspension and the mechanical grip served up by all-wheel-drive and massive 20” Pirelli gumballs fore and aft. In the rain, some of that fabled tail-happy 911 playfulness can be felt, when under a heavy right foot the rear ends slurs wide into a graceful arc, not threatening to come fully around but also letting its driver know precisely where its weight is located – beneath its hips. As with a lobster, the meat is in the tail. 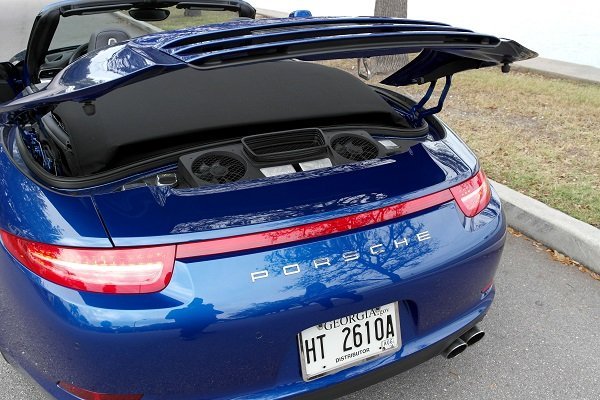 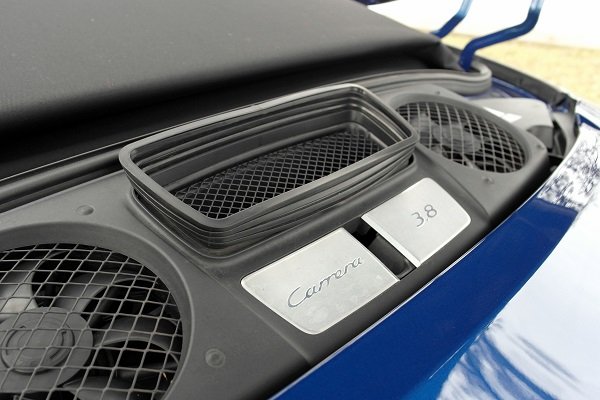 Thrilling handling and the ability to turn a small sticker price into a big one have been long-standing 911 hallmarks. New with this 991 generation, though, are two areas of some controversy: electric power steering, and a move to full integration of two-pedal PDK transmissions. Well known by now, the 991 Turbo and GT3 models are now only available with PDK, and while all Carrera models can still be had with a manual, the adoption rate of such gearboxes is getting slimmer by the day. I was a little worried about how these two innovations might dilute the 911’s involving character, given everything I’d read about in the press. 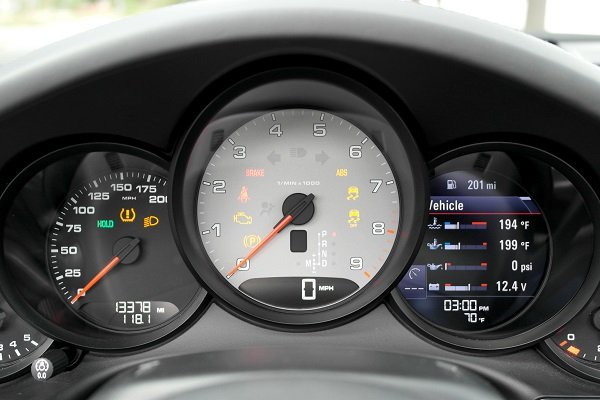 Let’s start with the steering. Much has been made of Porsche’s switch to electric power assistance in this current generation. Torches and pitchforks have been brandished by the automotive press to hunt out the witches over at Porsche AG that rubber-stamped this abomination’s approval. “Well, it must be awful”, I assumed, shrugging it off. Then after spending time in this Carrera, I jumped back into my own car – a 2006 Cayman S – for a quick run to the store. Guess what? In the Cayman, I now noticed myself fighting with the wheel over minor pavement ruts and tramlines. Creases in the asphalt subtly yanked the steering wheel this way and that, never alarmingly, but somehow annoying. This wasn’t the kind of feedback Porsche managed to engineer into the 991’s electric rack – the kind that gives you topline information about the road surface and tire grip, allowing you to modify your pace accordingly. Instead, the older hydraulic unit was more akin to letting the dog walk its owner, not the other way around. 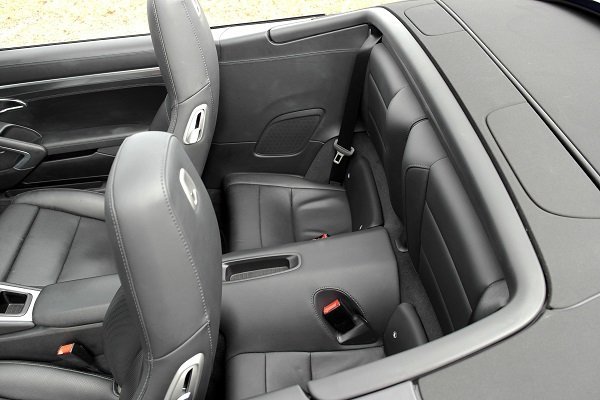 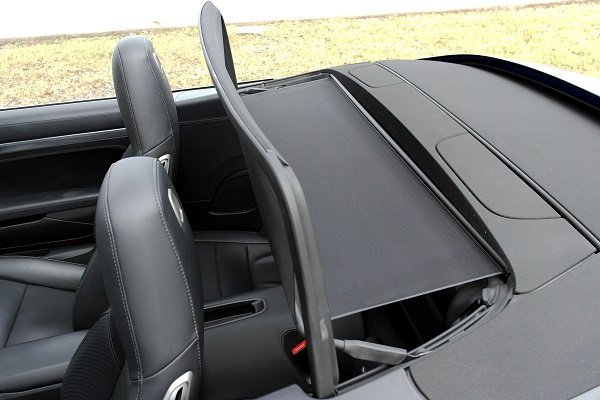 Same goes with the transmission. Granted, I’m as much of a manual-loving dinosaur as the next guy, but this generation of PDK works astonishingly well – enough to slacken even the most ardent manual supporter’s jaw. The 4S is about point-and-shoot performance; its grip levels are massive, giving you the option of braking deep into a corner, then getting the nose keyed in and simply stomping the throttle on the way out – all the while, letting the car sort out everything but the timing. No fuss, no muss. A manual, no matter how good, would leave the driver one step behind this chassis above seven-tenths. There’s also the belief that, though it lacks a gearlever to row and a third pedal, a properly executed dual-clutch automatic can provide its own tactile delights. PDK’s shift speed, rev-matched downshifts, and nicely placed and well-weighted paddles helped win me over, despite the absence of a clutch pedal. Just make sure you tick the box for the SportDesign steering wheel, as that’s the only way to get proper paddle shifters for the PDK. 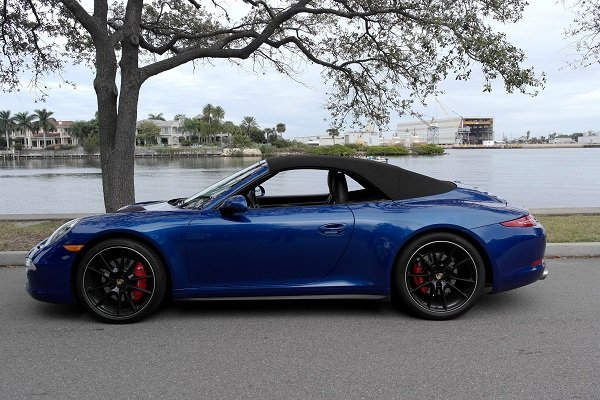 I wanted to be befuddled by the Carrera 4S Cabriolet. Before I lived with it for a week, I wondered who would buy such a Porsche – on the surface, some would argue it embodies all of the compromises of the various 911 variants, but distilled of any purity. Now, I see it as quite the opposite. If you’ve got a stable full of exotic machinery, the car pictured here isn’t what you’d pick to rip around a racetrack. To think of it that way is to miss the point. This C4S Cabriolet is the absolute embodiment of the “everyday sports car” – as an only car, the possibilities are almost endless. You can tackle a winter in the mountains thanks to the all-wheel-drive and fully insulated top, enjoy a smooth highway slog back with active cruise control set, and when you arrive in sunnier climes, drop the top and enjoy airy motoring free of drafts – even above 80 mph. The built-in power wind deflector does an admirable job of keeping the cabin serene enough to talk to your passenger and even take Bluetooth calls. If that’s not the epitome of the “one car to do it all” philosophy, then I don’t know what is. 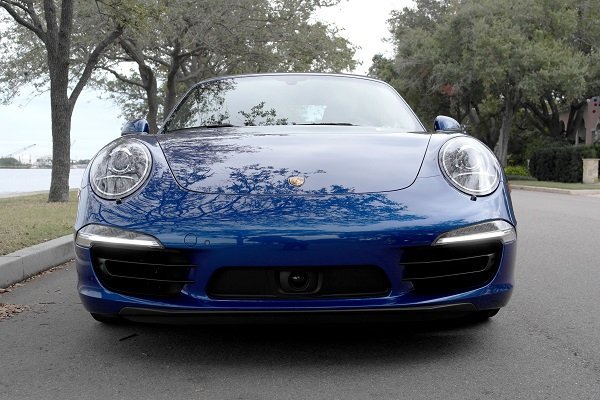 Porsche provided the vehicle for testing purposes and one tank of gas. Photos by the author.