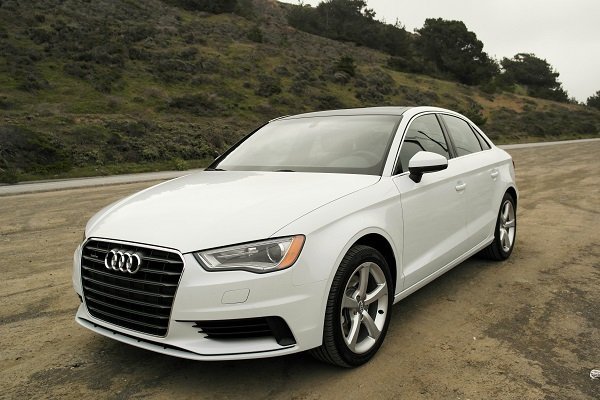 In a car industry flush with new luxury categories, the one that seems to present the most room for growth is the one at the small end of the spectrum – the “Premium A-segment”, filled with cars like the A3 seen here, the Mercedes-Benz CLA, and the BMW 1-/2-series. Audi of America’s President, Scott Keogh, told the group of journalists gathered in northern California for the press introduction of the A3 1.8 and 2.0T sedans that he saw 400% growth potential in the segment over the next few years. That’s serious headroom, and if these first new A3 models to hit our shores are any indication, a place where torrid competition will be taking place among manufacturers. 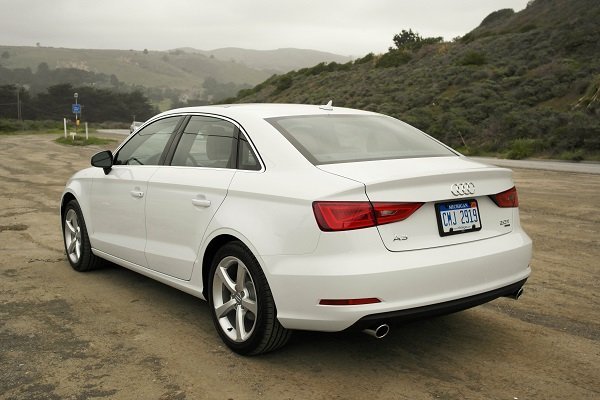 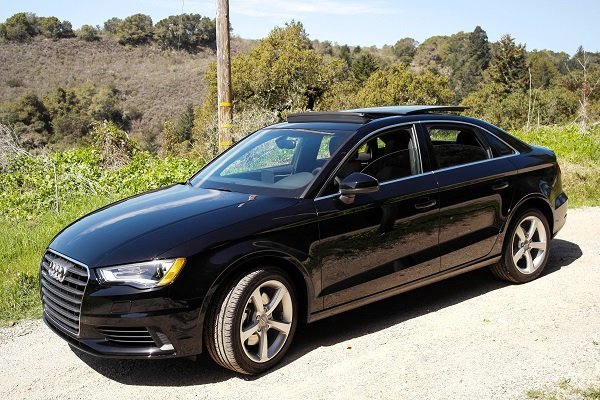 While the S3 sedan coming this fall will be aiming for enthusiasts’ heart strings, the 1.8-liter and 2-liter turbocharged gas A3 models seen here will represent the volume models, which will likely still hold true once the upcoming cabrio, Sportback e-tron and TDI models arrive. It shouldn’t be hard for the pair to rack up sales numbers, either, considering the bottom line: matching the CLA250’s magic sub-$30,000 “starting price” (even though that excludes the mandatory $895 destination charge) while offering more standard equipment and arguably superior tech. That emphasis on tech was touted over and over again at the Silicon Valley press launch, especially Audi’s long-standing relationship with Google for in-car navigation, newly available (first in the Audi lineup) 4G LTE integration from AT&T, and an available 705-watt Bang and Olufsen sound system. 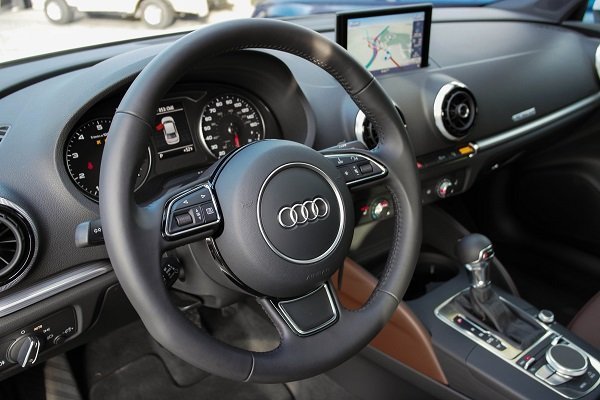 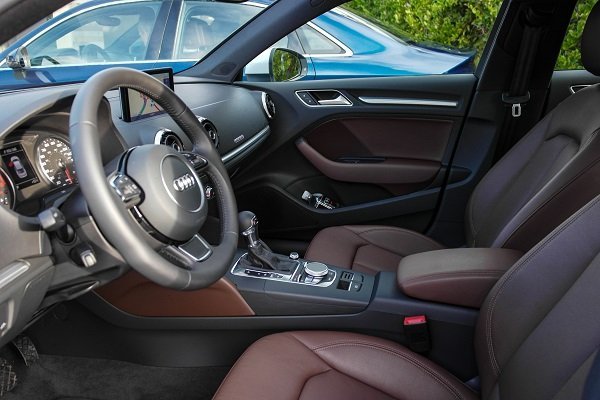 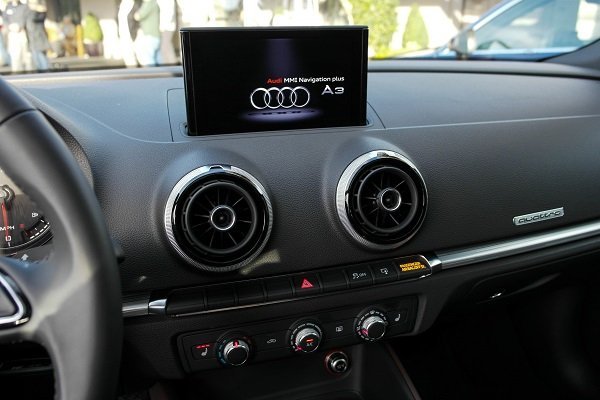 Our drive time was largely fixated on the 2.0TFSI model, which features Quattro exclusively instead of the 1.8-liter car’s mandatory front-wheel drive. A quick drive of the 1.8 confirmed that it features all of the 2.0’s solidity, comfort and refinement, as well as adequate poke – but the 2.0 is the one you really want. Feeling every one of its 220 horsepower and then some, the 2.0TFSI (also found in the upcoming Mk7 GTI) rewards with a shove of 258 lb-ft of torque over a broad rev range. Extra-legal speeds are achieved quietly, comfortably and seemingly without effort – the A3 is quiet almost to a fault and a rortier exhaust system to uncork some sound and perhaps a few ponies would be first on the upgrade list if I was a customer. 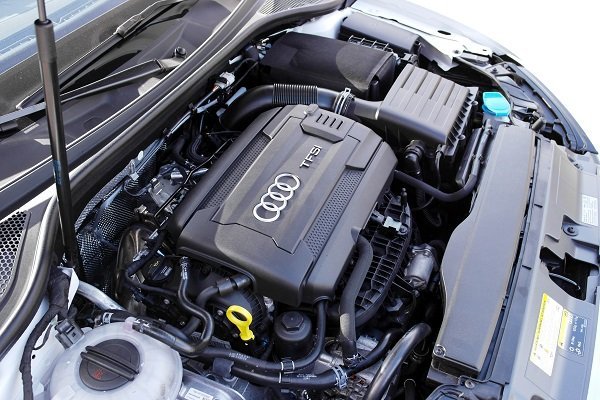 The requisite transmission for both models is a 6-speed dual clutch S-tronic that goes about its business as well as anything else in the industry – most of our drive time was limited to the base Premium trim level that forgoes the available paddle shifters on the other lines, but even in Sport mode the gearbox responds dutifully to throttle inputs and never seems to get caught out. Even on our hilly redwood country test roads, the gearbox was happy to hold a low gear for aggressive cornering and altitude changes. A later drive in a Sport-package-equipped Prestige model confirmed that the shift paddles do indeed liven up the experience, but I wouldn’t feel ripped off in a model without them – they just add a little bit more engagement. Further engagement in the form of a manual transmission option isn’t on the table at this point, although when pressed, Barry Hoch (Audi’s GM of product planning) seemed to hint at the possibility of one if demand dictated. 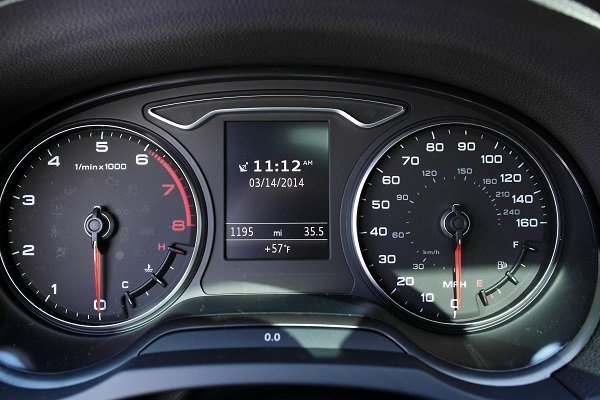 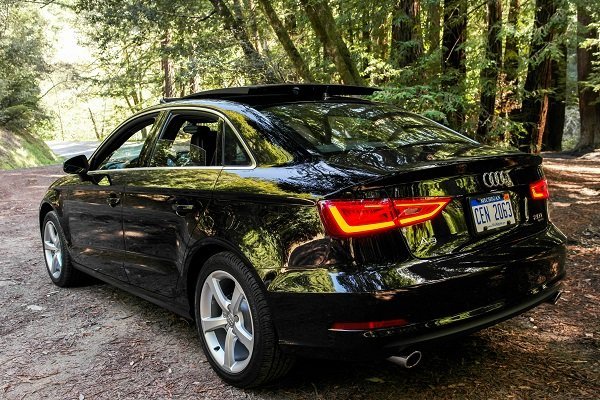 The added power (40 hp) and torque (58 lb-ft) figures of the 2.0T almost seal the deal all on their own against the $3,000-cheaper 1.8-liter model, such that the inclusion of Quattro all-wheel drive seems like a gracious freebie. The A3’s chassis certainly held its own over the course of nearly 300 miles of challenging NorCal coastal and forest roads, proving not only stable but fun in the process. The 17-inch base wheels (standard on the Premium model regardless of displacement) are shod with taller all-season Continentals and allow you to really get beneath the chassis’ skin and do some dancing on trickier switchbacks – transitions between grip and mild rotation or understeer are well-broadcasted, and the electric power steering, while overly light, is nevertheless very faithful and possessed of a quick ratio. The A3 2.0T is simply quite pleasant to hustle on a back road and even at a brisk pace, the car never gave pause or showed signs of strain through its brakes or tires. 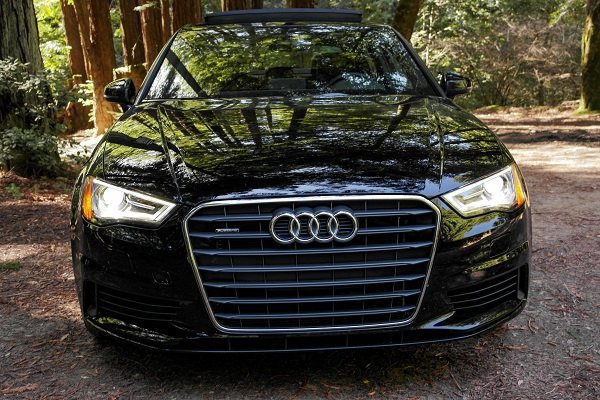 Dialed back to saner commuting speeds, the A3 still shines – it’s got a ride that is smooth without feeling detached, handling broken pavement without clomping on either 17- or 18-inch wheel options. Road noise is well muted, though a bit of wind noise comes through at higher speeds – not enough to cause an annoyance, though. The car’s structure feels solid – our testers evinced not a single squeak or rattle – and the interior more than holds its own at its price point. I spent a bit of time in the European A3 Sportback last summer during a road trip through Germany, and found the cabin to be well-designed, thoughtfully laid out and comfortable over long highway stretches. The A3 sedan continues that theme, and while I wouldn’t want to be confined to the back seat for several hundred miles at a time, the front cabin is more than roomy enough to provide two adults with a pleasant experience no matter the distance. Trunk space is decent, too. 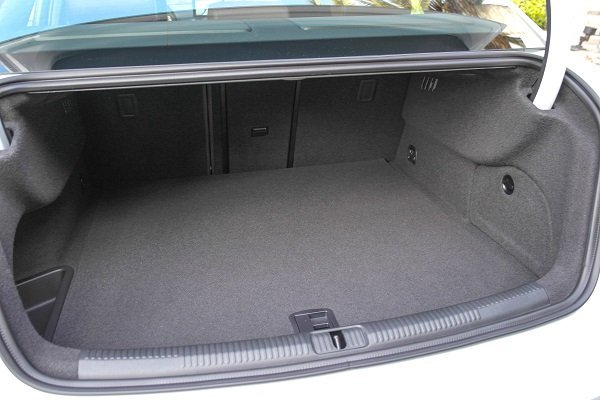 Overall, the A3 impresses with thoughtful standard equipment levels, cohesive design and a quite pleasant – dare we say playful – driving experience. I’m sure Audi will sell a ton of them, and the A3 deserves every customer it earns – it’s a competent little car that competitors should find very troubling, indeed.

Audi flew me to California, put me up in a hotel and fed me for two days. They also provided the vehicle for testing purposes and fuel. Photos by the author.