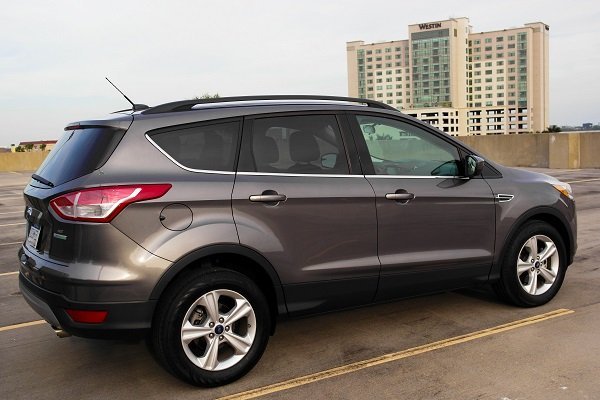 The Escape is a compact crossover class stalwart, fighting tooth and nail with the Honda CR-V and Toyota RAV4 for the sales crown, month in and month out. As a symbol of the new global Ford it carries itself well, although the last Escape was decidedly archaic when compared to the current model introduced in 2012 and even it sold well. The Tiguan I drove a few weeks back is an also-ran in its sales segment despite being a great car, selling just a tenth of what the big names do. Is the Escape ten times better, or is it simply name recognition at play? We borrowed one for a week to find out.

The Escape that turned up at my door was remarkably similar in spec to that Tiguan. Both carried “SE” trim badges, meaning they were each the mid-level model in their respective lineups and featured most of the creature comforts buyers expect in a new car – think Bluetooth, power driver’s seats, alloy wheels and the like. They both featured turbocharged four-cylinder engines producing similar power levels, mated to six-speed automatic transmissions driving just the front wheels. They even wore nearly the same shade of metallic gray paint and as-tested sticker prices within $400 of each other. It doesn’t get more evenly matched.

But subtle differences are apparent right away – starting inside. The Ford’s swoopy, futuristic design (both inside and out) is to be expected – VW and their other German cousins have always displayed more styling restraint than we Americans have. But equipment levels are different as well. The focus (no pun intended) on technology in the Escape is immediately noticeable, with MyFordTouch, navigation and Sync included among the options on our tester. If you need to find your way to the store or talk to the Tiguan, your requests will fall on deaf ears. But in terms of material comfort, the Tiguan counters with leatherette trim, a leather-wrapped steering wheel and heated seats – features conspicuous by their absence in the Ford. Fit and finish and material quality are also a notch higher in the German. And while the VW lacks the modern componentry present in the Ford, its traditional push buttons never frustrate. 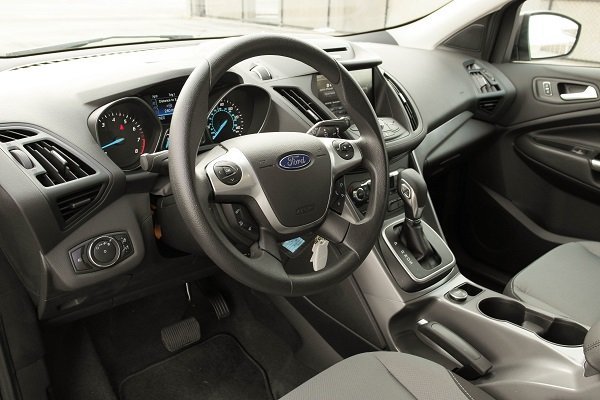 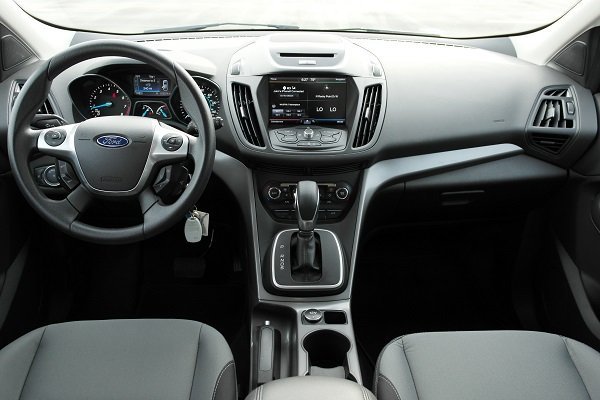 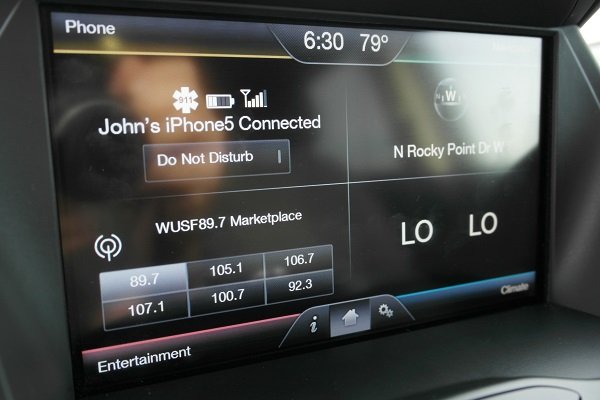 Out on the road, the character of these two crossovers is remarkably similar. The Ford’s smaller engine (1.6 liters versus the VeeDub’s 2.0) doesn’t really act smaller until you rev it beyond 4,000 RPM, where it feels strained and runs out of puff. But around town, the 1.6 EcoBoost actually provides adequate thrust and was obviously tuned to provide the torque of a larger engine where it matters. It also delivered excellent economy for a roomy crossover – more than 26 MPG in mixed conditions and 30 MPG on the highway. The Tiguan’s 2.0TFSI unit feels every inch the more powerful engine, endowed with 22 extra horsepower on paper (and probably even more in practice), but it doesn’t really provide much more useful acceleration until you’re at highway speeds or in a passing situation. Most shoppers will be satisfied with the 1.6 EcoBoost’s around-town demeanor and stellar economy, but I’d still tick the option box for the 2.0 EB’s 240 horsepower every single day, and twice on Sunday. 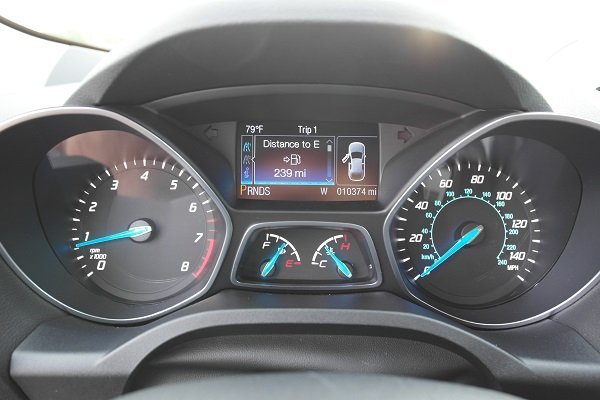 The Escape’s chassis, based as it is on the excellent Focus, has been lauded as the best handler in its segment, and it doesn’t disappoint. Turn-in is crisp and immediate, the steering direct and body roll present but well-checked. Ride quality is firm but comfortable. The VW’s ride-and-handling balance is velvety soft in comparison, but it does tend to wallow around a bit more and doesn’t exhibit the steering response of the Escape. 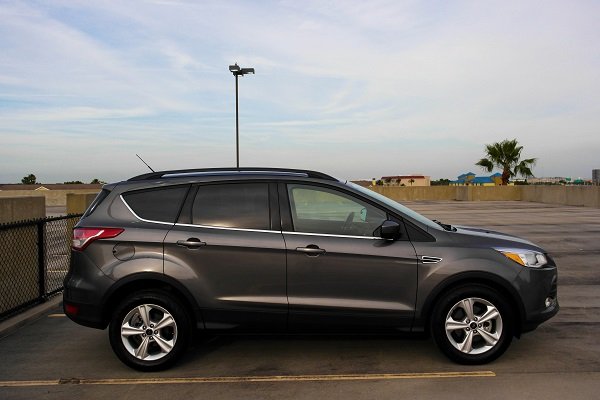 The Escape also handily trumps the VW in perhaps the most important crossover category – interior space. With 34 cubic feet with the back seats in place, the Escape effectively hands the VW its you-know-what, which holds just 24 cubes. Its the same story with the seats folded – 68 cu. ft. in the Ford plays 56 in the VW – and overall interior volume, at 132 cu. ft. versus 119 in the VW. All that space pays dividends in the duties that owners are likely to task these vehicles with, like hauling Costco loads, kids and all their detritus. And while they’re not generally used for towing, the Ford has the VW covered there in a pinch, too, rated to tote up to 3500 pounds instead of just 2200. You don’t really have to pay for any of that extra capability at the scales, though, since the Escape is only a hundred pounds heavier than the Tiguan and barely larger in any other exterior dimension. 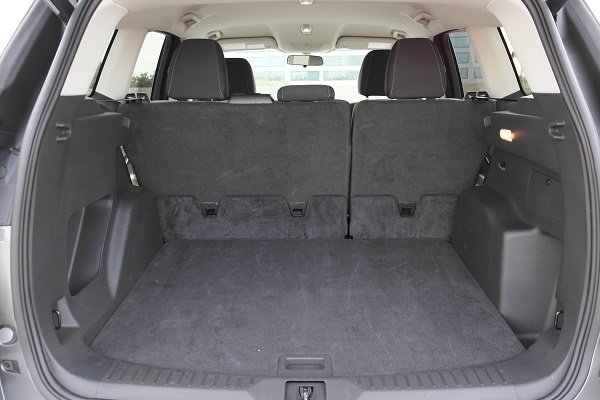 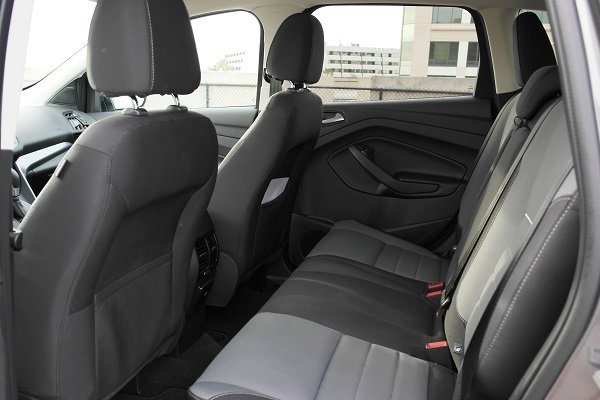 In terms of which car I actually preferred driving, I’d still probably just give the VW the nod, though with the optional 2-liter EcoBoost engine, the tables could easily turn back in the Escape’s favor. Despite the Ford’s slightly sharper chassis and obvious advantage in equipment, capacity, and economy, I personally placed greater importance on the VW’s plusher cabin, timeless styling and more powerful motor. Of course, sales speak louder than words – and frankly, it’s obvious why the Escape dominates the Tiguan on the sales charts. The Escape’s combination is a winning one, and likely one that the Germans will be chasing for quite some time. 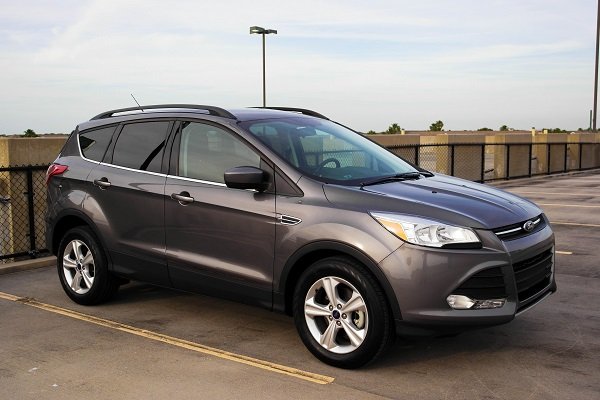