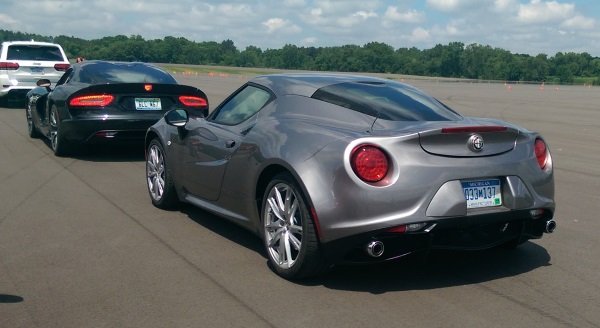 “They made me promise to behave,” says the Fiat engineer in the driver’s seat. “So, I will behave.”

I’m still watching the little Fiat blunder through what should be a relatively fast section of the course. “Could you maybe behave a bit worse than that?” I ask, sticking my chin in the general direction of the little white hatch. She chuckles a little bit, in that not-quite patronizing way a woman can be when she thinks a guy is attempting to be somehow impressive and failing at it. I keep my gaze fixed on the Fiat, in that not-quite-dismissive way a guy can be when he thinks a woman is over-complicating a straightforward situation, but I decide to leave well enough alone. A slow run is better than no run.

After the thoroughly-narrated reconnaissance pass, I report to the Chrysler representative responsible for the list. Actually, there are two lists–one for the Viper and one for the 4C. One cannot drive the in-demand vehicles here at Chelsea’s skidpad without first being on the list. I verify my position on both and stand back to observe my peers in action. One by one, journalists are herded up to the start line, instructed patiently on the process of vehicular ingress, given a few quick pointers on the car’s primary controls, and then dispatched into the sea of orange and green rubber.

What happens next depends on the personality of the self-certified expert behind the wheel. You have the cautious and insecure types who take a Viper around the course much in the way a distracted father shepherds his flock around a mall parking lot in a minivan; you have your Tanner Faust wanna-bes leaving behind $250 clouds of clutch dust and $500 rubber stripes at the start just because they’re in somebody else’s equipment; and then you have the folks who act like they’ve been there before–a good chirp at the start, constant-but-not-oppressive squeal heard from a distance as they navigate the little plastic gnomes, and a few giggle-inducing encounters with lift-throttle oversteer.

I take it all in, occasionally sharing a knowing look with a Chrysler or Fiat engineer on chaperon duty. When my name is finally called, I’m beyond ready. I hop onto the tarmac, snap a quick shot of the cars with my phone, and then wiggle into the driver’s seat of a gorgeous red Alfa Romeo 4C, and I know instantly that the indignities of the day have all been worth it.

First impressions: the interior is not spectacular. The seats are gorgeous and supportive and the steering wheel is suitably meaty, but everything else exudes functionality above quality. Think Miata, but with Italian flair. I reach out to the floating center stack and give it a quick poke with my index finger; it yields quite a bit. An Audi, this is not. 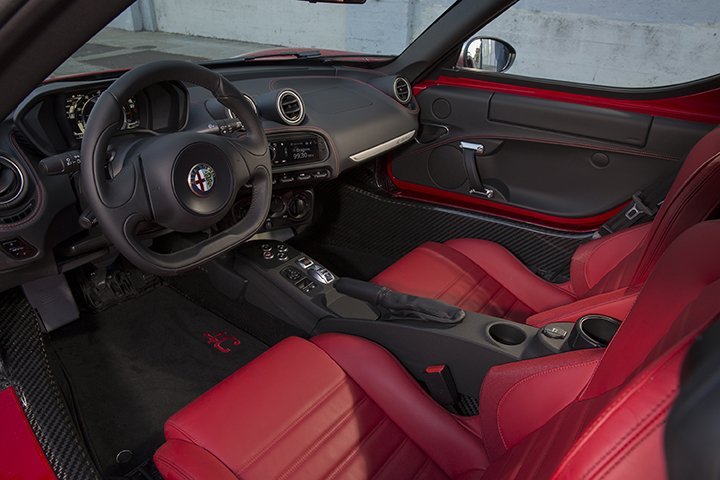 I’m third or fourth in line, so I play around a bit with the important controls, neutralizing the nannies to the best of my limited abilities and exploring the different modes of the transmission. There’s no traditional selector or column shifter here. Instead, there’s an arrangement of buttons on the center console marked “1,” “A/M,” “N,” and “R”–drive, auto/manual shift toggle, neutral and  reverse, respectively. Pro tip: let somebody else be the first to hand off a 4C to the local valets.

As the line in front of me moves, I lift off the brake, expecting the 4C to creep like most modern DCT-equipped vehicles. It doesn’t. A gentle prod on the throttle urges it forward a few feet. By the time it’s my turn to dodge some cones, I’m reasonably comfortable with the Alfa’s control layout. Now comes the fun part.

When I get the thumbs-up from the course monitor, I stab greedily on the gas pedal and the 4C’s tiny, turbocharged engine barks to life. For a bone-stock car from a luxury marque, the Alfa is unapologetically loud, but like its little, front-drive cousins elsewhere on the course, it’s all the more charming for it. The first turn comes up quickly, and as I grab the brakes and turn in, I’m quickly reminded of a feature the 4C lacks. It has glorious, heavy, communicative steering that is unmatched in modern vehicles, but that comes at a cost. There’s no power assist.

I’m used to driving modern vehicles that can be flicked around an autocross course with a few fingers here and there, my hands dancing quickly and reflexively around the rim as I zip from off-set gate to off-set gate. The Alfa is not one of those vehicles. Tight turns require two hands and a healthy dose of forethought. It’s the first car of its type I’ve driven in a long, long while that genuinely punishes the driver for making sloppy mistakes.

And I love it. By the first corner exit, I’m grinning ear-to-ear. The Alfa’s Pirelli summer tires are respectable, but endless lateral grip is not the name of the game here. The tires give way very predictably and the chassis rotates with startling obedience. As I enter the sweeper that I watched the Fiat driver attempt earlier, I gently roll onto the throttle until the front end starts to run wide and hold it. The car settles gracefully and waits patiently for further inputs–a gentle lift to nose into the corner a bit more and then a quick hit of throttle brings the car around into the most care-free drift I’ve ever experienced. I’m laughing delightedly at this point, powering the car out of the sweeper and into a quick straightaway with all four tires just over the peaks of their traction curves. This car isn’t just good, it’s sublimely wonderful.

But all this excellence comes at a price, and one that opens up quite a few options depending on your tastes. The starting MSRP is just under $60k for a standard model, and options (the Launch Edition included) will push the price up to nearly 70 large in a hurry. That’ll buy you a Cayman S with a few key options, a Z51 Corvette, any of the supercharged pony cars or even a Lotus Elise (you know, in case the Alfa is just too civilized for you). Let’s not forget the M3, the C63 and the upcoming RC F. At 227 horsepower and 2465lbs, the Alfa’s power-to-weight makes it a contender even in this company, but there are better choices if outright speed or luxury are your priorities.

If it were my money, I’d take a very long look at the Corvette (another spectacularly good performance car) and the Alfa before pulling the trigger. The Alfa’s exclusivity, sincerity and purity of purpose make up for the lack of outright power. Either could be the right choice under the right circumstances.

Chrysler provided lodging, meals and transportation to and from the event attended by the author. Interior photo courtesy of Chrysler Group/Alfa Romeo.