As I drive around in the latest iteration of VW’s American-market Passat, now featuring the 1.8 TSI engine, driving impressions of the outgoing 2014 Sonata in Hybrid guise – a car I drove the week prior – flashed into my mind. The Sonata that this 2014 Hybrid is based on was introduced back in 2009, and the newly revised 2015 Sonata will be hitting dealerships around the time you read this (though the Hybrid version soldiers on in current form until a new one bows for 2016).

Though the Passat was new for the 2012 model year, it too is an old guard among the current mid-size sedan crowd – the Accord, Fusion, Mazda 6, Altima, Malibu and 200 are all newer. And while the Sonata Hybrid and Passat 1.8T appear quite different on paper, they’re remarkably comparable in the real world; especially when it comes down to price.

For an in-depth review of the current Sonata Hybrid, you can find my extended write-up of the 2013 model here. Changes to the 2014 are few, limited to some minor interior enhancements like a color touchscreen audio display, a backup camera, and LED dome lights. Changes in programming now allow the Hybrid to run in electric-only mode at highway speeds when appropriate, though that didn’t translate into a discernable difference at the pumps, with the 2014 averaging 34.1 MPG in my hands to the 2013’s 35.0. Different driving conditions are likely at the root of the disparity.

That’s still plenty respectable economy for a mid-size sedan that requires little in the way of sacrifice for the Hybrid treatment, but even the non-hybrids of this class can approach low 30s in mixed driving by way of naturally aspirated and small-displacement turbocharged four-cylinders. You also won’t have to put up with the Sonata’s, ahem, distinctly hybrid-like brake and steering feel that I touched on last year. 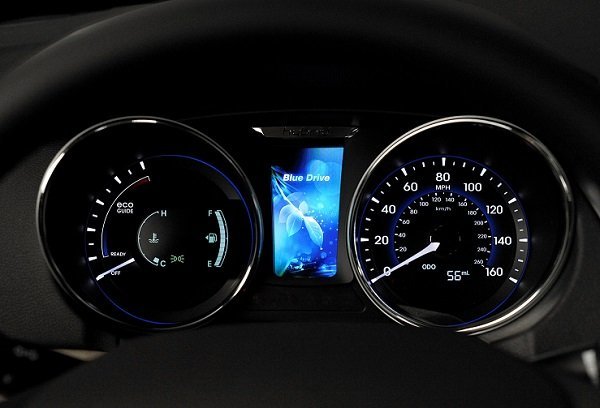 Elsewhere, the Sonata is better resolved from a driver’s perspective. Take-off is eerily quiet thanks to electrified propulsion, and even when the gas engine does kick on, the transition is seamless and silent. You won’t feel penalized for ticking the hybrid option box when you put the hammer down, either – there’s enough grunt on tap to easily keep pace with fast-moving traffic. The six-speed automatic is well programmed, and earns brownie points from me simply for not being a CVT. And the ride-and-handling balance feels better resolved than the Passat I’ll review next week – though the Sonata’s LRR tires dissolve into understeer far sooner than normal all-seasons.

As a value proposition, the Sonata Hybrid stands up quite well, which prompted its comparison to the Passat SEL in the first place. The VW rang in at $31,715, just a grand shy of the Sonata’s $32,685 sticker. Were it not for the $1,000 panoramic sunroof of our tester, the two would be priced within spitting distance of one another. However, in the Hy-Hy (Hyundai Hybrid) you get real-world economy that shades the Passat’s, a lengthier standard equipment list and an arguably “tech-ier” driving experience. The Passat counters with enough trunk and rear seat room to support a fledgling limo business.

There’s still plenty to like here, even though the new Sonata is around the corner – proof of just how solid the work that Hyundai did on this generation was, as well as how pivotal this car has been to the brand’s image revival.

Hyundai provided the vehicle for testing purposes and one tank of gas. Photos by the manufacturer.