Unless you’ve been living under a rock for the last few weeks, you probably know there’s a new, heavily revised 2015 Dodge Challenger on the horizon. And for the last week or so, there’s been an inundation of media about the fastest, most powerful iteration of said new Challenger (actually, make that any muscle car, ever) known as the Hellcat. I went to the press introduction to spend a day with the Challenger, in the hopes of getting past the hype and finding out what this new Hellcat is really all about. Read on to find out. 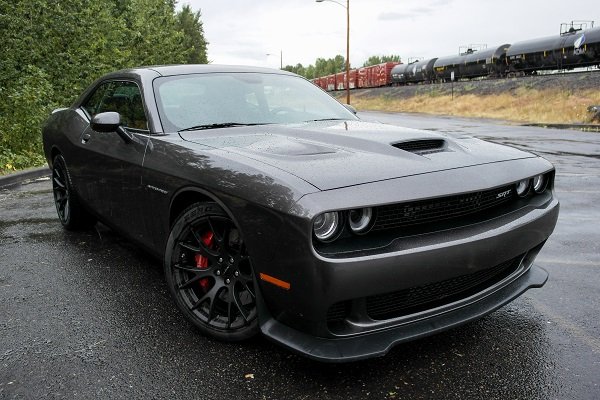 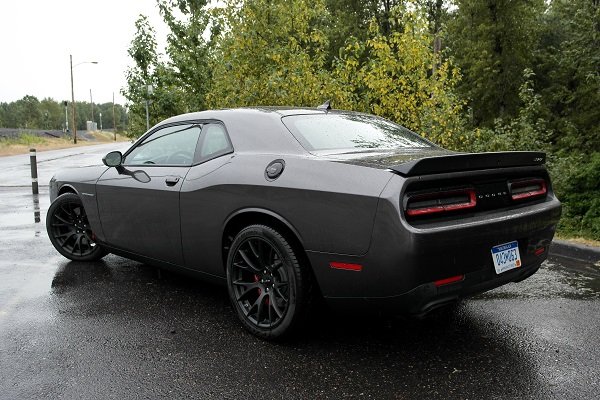 To start off with, this 2015 Challenger isn’t just comprised of a few new trim packages – it’s the most thorough revision the big Dodge coupe has seen since its intro back in 2008. The modern Challenger has always been a great looking car, combining its retro charm and modern touches more successfully than either of its Motown rivals. The 2015 revisions go just that little bit further toward evoking the spirit of the 1971 model, with modestly revised front and rear fascias that mimic the styling of that model year but also bring the Challenger into more modern territory with LED corona-ring headlights and LED taillights, plus a variety of functionally vented and scooped hood designs. It’s a great looking package, from V6 SXT to the halo Hellcat, and the extensive variety of paint and trim combinations accurately recalls the era of the 1970s original. 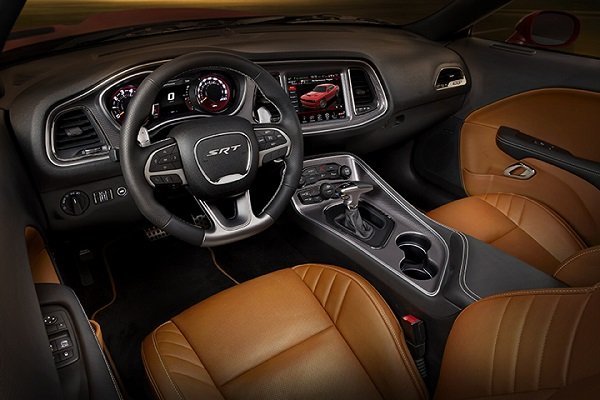 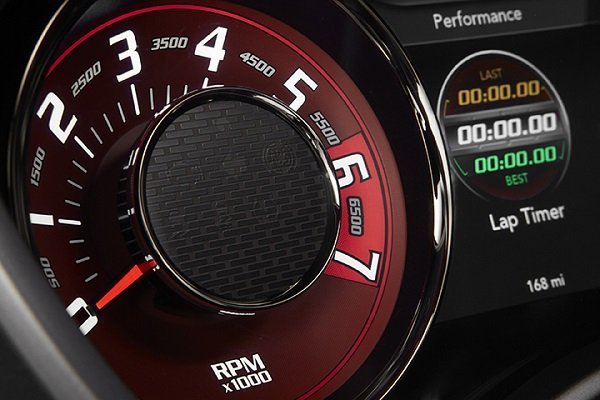 Clearly, Dodge spent a lot of the revised Challenger’s budget on the interior – it’s a massive leap forward. The previous Challenger always looked the business on the outside, but right from the get-go, it was apparent the DaimlerChrysler bean counters had stripped all the fun out of the cabin. This new interior makes up for that in spades, sporting a pleasantly driver-centric dashboard, throwback styling, far better materials, and enough tech to shame the rest of the segment. In fact, while the Challenger was always a comfortable coupe, it’s now actually got an interior that will make you want to spend time in it – turning it into quite the American GT car. The seats are still big-boy tailored – the bolsters look heavy-duty in photos, but the thinner of frame may find that they hug a little too lightly in hard cornering. The alcantara center fabric helps keep you from being flung out the side window, at least. 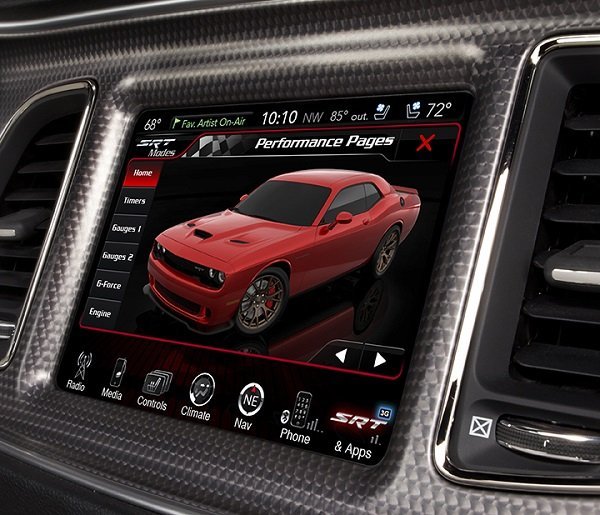 The fully baked uConnect touchscreen system finally appears here as it does elsewhere in the Dodge lineup, controlling just about everything in the car but augmented by a helpful arrangement of buttons and knobs just below. Using the controls at knee level but looking up for the screen felt a little unnatural at first, but you quickly get used to it, and the rest of the cabin’s ergonomics are spot on. Also new is an in-depth suite of performance apps that let you easily tailor steering weight, damper firmness, automatic transmission response and traction/stability control settings completely independently of one another. 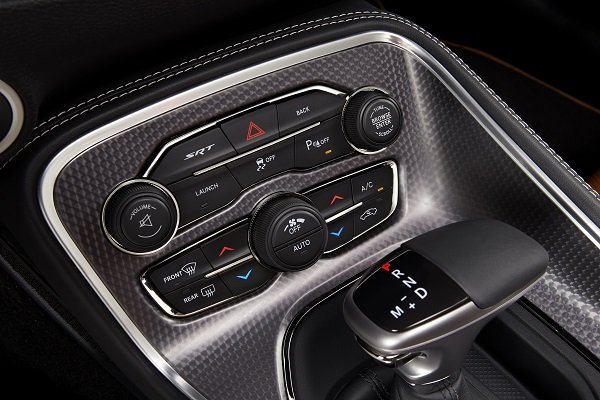 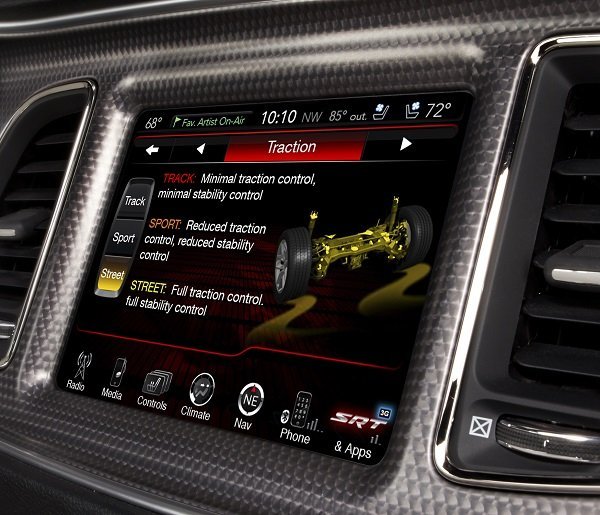 But let’s get to the real meat of this sandwich – the motor. The Hellcat engine is the revised Challenger SRT’s raison d’etre, so I’ll spend a bit more time dwelling on this 707-horsepower, 650 lb-ft behemoth than I otherwise might. 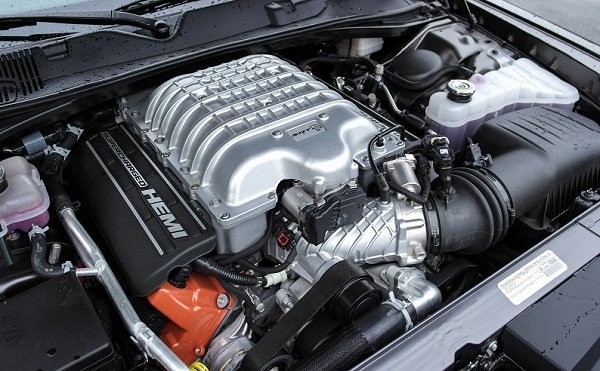 As you would expect, it’s the power that dominates the Hellcat driving experience. It’s simply omnipresent in a way that few other cars currently on sale can match, and none at a similar price point. Even toeing lightly into the gas sends shivers through the rear tires, such that you’d probably find it tough to drive a lesser car immediately after hopping out of the Hellcat, because it forces you to re-calibrate your right leg muscles. From idle to redline, there’s thrust everywhere, and the psychotic bellow that comes from the exhaust pipes is rivaled for sound quality only by the supercharger’s dominant whine. 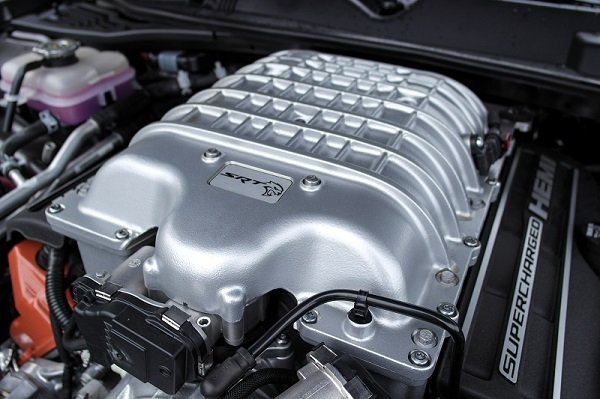 So how fast is it? Damn fast. Really, really damn fast. I can count the number of high-10/low-11 second cars I’ve driven on one hand, so for me, the experience was certainly eye-opening. You feel as if you can almost extract all the performance it’s capable of on a race track. But on the road, forget it – you’ll constantly be managing speed and acceleration in the back of your mind, knowing a ticket or jail time is close at hand. The transmissions tasked with getting all that power and torque to the ground have a lot on their plate, but perform admirably. The new 8-speed TorqueFlite automatic (an across-the-board addition, but beefed up for the Hellcat) quickly and reliably cracks off firm upshifts and rev-matched downshifts through the standard-issue paddles. It also helps free up processing power in your brain for dealing with blurring scenery and fast-approaching corners, which would otherwise be used to manage shifting the manual. The six-speed Tremec ‘box, tapped for duty from the Viper, operates smoothly as well, and would probably be my choice for street driving – shift action is tight and well-defined, the clutch is heavy enough – but in no way overpowering – and easily modulated. 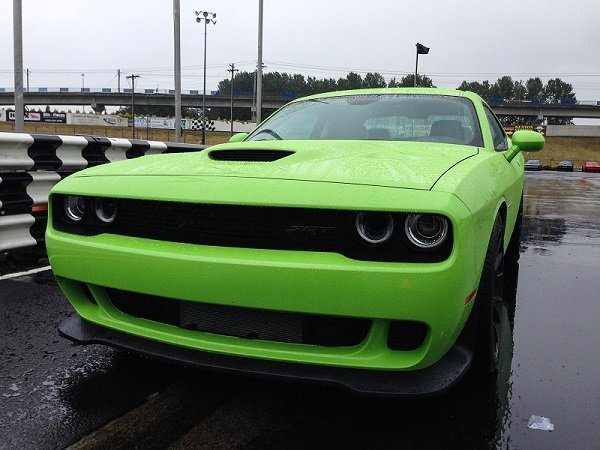 Track Impressions: So here’s what we know so far: The Challenger SRT Hellcat is completely bonkers from a power delivery and noise perspective; simply on another level. As such, I was initially tentative in the car around the track, what with our day in Portland getting off to a very wet start and standing water crowding the straights in many places. But the Hellcat is very trustworthy in the rain – it’ll let you play as loose or as tight as you want to, with enough grip if you can tailor your throttle inputs, or controllable sideways antics virtually anywhere, at any speed, if you so desire. Steering response is moderately weighted and decently quick, but while the Hellcat turns-in fairly well, this is nevertheless a car that carries 2,500 pounds or so of forward bias, and you can feel it in slower corners. Of course, oversteer is never more than a quick jab of the throttle away. The 15.4”, two-piece front steel rotors and 6-piston Brembo calipers do an admirable job of slowing the Hellcat on track from a decent clip, though with only two flying hot laps per session available during my time with the car, I probably wasn’t even starting to push their heat management limits. Still, for those intent on tracking their Hellcats, I’m sure a set of steel braided lines, high-temp fluid and pads would be enough to shore up braking for just about any situation. 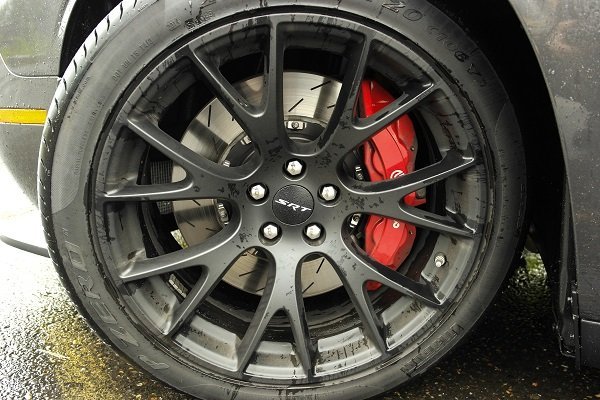 Portland International Raceway, where a portion of the Challenger media release was held,  is a relatively small, straightforward track, with the “back straight” (the area between turns 8 and 10 on the map below) being the best place to gain a good bit of speed. As the day went on and the rain abated, a mostly dry line started to form around the track, though this curved back straight remained damp due to it being in the shade all afternoon. I was hitting about 120 mph in the 485-horsepower SRT 392 in the first (very) wet sessions of the day back here, and 128 or so in the Hellcat. On my last and driest lapping session of the day, I managed 134 mph along the back straight – still slightly damp, mind you, but nearly dry elsewhere. My instructor was saying the Hellcats were good for about 140 or so on a bone dry back straight in professional hands, so at my more novice skill level, the fact that the car created such a high level of comfort in just a handful of laps (I probably had 8 total laps in Hellcats by the end of the day, maybe 20 total in all Challengers) really speaks to the car’s setup – Dodge got it dead on, making the car playful and oversteery enough to feel “untamed” to most mortals, but being fully planted and trustworthy enough to really lean on the car in the dry when properly driven. It’s an amazing machine to experience fully uncorked – and an experience that’ll stick with you for some time. 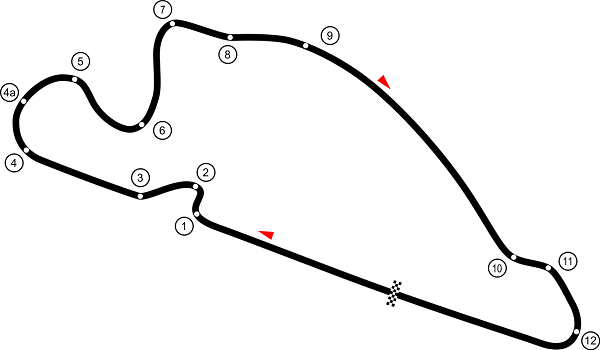 Dodge has served up perhaps the biggest reason yet to believe that we’re living through an amazing time to be an car enthusiast. Performance and power at this heightened level would have been unthinkable just a few short years ago, but the fact that you can walk down to the Dodge dealer, plunk down $60 grand – roughly double the average new car transaction price but far from exorbitant – and walk away with a 707-horsepower missile with a full warranty is nearly unfathomable. Oh, and owners lucky enough to do so will also be treated to a day-long, on-track SRT driving experience similar to the one journalists received, so they can hopefully get beneath the surface of what the Hellcat is capable of.

Of course, on the other hand, using all that power on a daily basis is going to be pretty tough. It’s hilarious driving around in a car that will happily spin its tires at a 40 mph roll in third gear, all day long. But it’s also a bit of a chore, because you’ve got to give serious consideration to what will happen any time you brush the right throttle. Literally 10% throttle application had the rear tires chattering in the rain. In conditions other than a pelting Pacific Northwest rain, it’s probably more manageable. But nevertheless, you really need to take the Hellcat to a drag strip or a road coarse to do anything but scratch the surface of its abilities and accumulate speeding tickets. So, therein lies the rub. As a car lover, I’m thankful Dodge had the guts to engineer and build such a vehicle, and I’m even more thankful that they let me drive it on a race track. For most buyers, the sheer level of performance and character on offer will be more than enough to justify the $14,000 premium over an already-belting SRT 392. It’s also reasonable to expect that anyone not ponying up the extra cash for the Hellcat might have regrets later on that they didn’t take the jump. Still, for my money, I might consider saving the dough and going with a SRT 392 or even the Hemi Scat Pack, both with a 6.4L, and putting the money saved toward spare rear tires. Ah, scratch that – gimme the Hellcat. 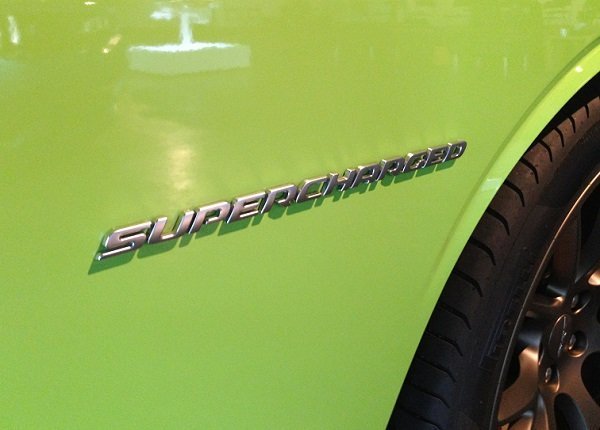