Ahh, Porsche. I had nothing but praise for the HVAC-deficient Cayman R I drove a few years back. Despite the 100-plus-degree heat and Amazonian humidity, driving the stripped-down 987 was an absolute blast.

This time around, our tester is “just” an S, but on paper, it’s every bit the performer that the 987 R proved to be. If anything, the R was a preview of this generation’s S. The R boasted 330hp and 273lb-ft of torque from a 3.4L flat-six. The new S? 325hp and 273lb-ft from the same displacement. The curb weights? Essentially identical. In fact, the only apparent differences are in the level of comfort and refinement.

Make no mistake, the Cayman gives up quite a bit of both to the touring-oriented 911, but it manages to convey 90% of the feel of the old R without many of the compromises. This comes at a cost, of course. Despite being loaded up with performance features, the old R could be had for right around $70,000 the way we had it configured. This S, without nifty doo-dads like the R’s Sport Exhaust or its fantastically aggressive, track-ready seats, is already pushing $90k. Sure, the R didn’t come with the Burmeister surround sound or navigation (or, for that matter, air conditioning), but the price differential is still eye-opening. It seems ridiculous now, but part of me believed the R was a case study in paying more money for less car. In hindsight, it looks like a bargain. 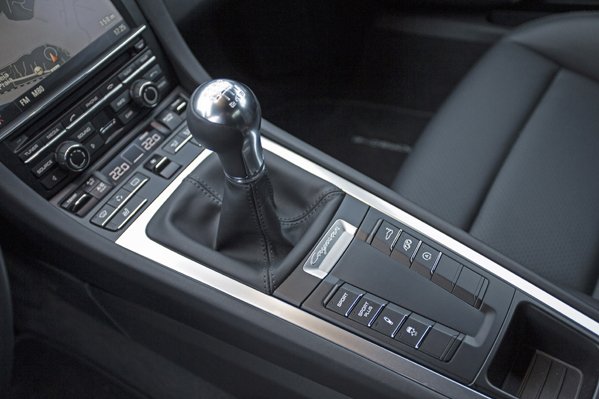 On the bright side, the new Cayman performs about as well on the street as it should on paper. Road noise that was forgivable in the R is a bit more intrusive here. Our tester is equipped with 20” Carrera S wheels ($1,560) wrapped in Pirelli P-Zeroes (235/35 in the front and 265/35 in the rear). It’s worth noting that the 20” wheel/tire package does not appear to come in any wider than the standard 19-inch bundle (clad in 235/40 and 265/40, respectively). If you’re upsizing, it’s for looks, not for go-fast potential, but I have no doubt the larger wheels and thinner rubber contribute to the noise.

The good news is, small wheels or big wheels, the Cayman scoots along exactly as you’d expect. It takes some serious gusto to break the back end loose on the street. A healthy left- or right-turn from a dead stop will have you counter-steering a bit even with the nannies on, but even then, the drama is minimal. This is no Alfa 4C. Composure is the name of the game. Sure, there’s some driveline lash when you’re just puttering around, and the (likely piped-in) engine noise is omnipresent, but you’re certainly not suffering.

And like any modern Porsche sports car, it draws attention, for better or for worse. The blue on our loaner would be hard to miss even on a Vespa, so that’s not helping matters. Every loud exhaust or squealing tire is attributed to the Cayman regardless of culpability. At one point, a couple of “down-home” gentlemen in an older domestic pickup truck erroneously attribute the blatting revs of an obviously modified Mini Cooper to the Porsche, and attempt to rev their V8 in response, nearly rear-ending me at a stoplight when they forget how “Park” and “Neutral” work. At least nobody approaches me for cash at the gas pump. That happened in the 987. Twice. 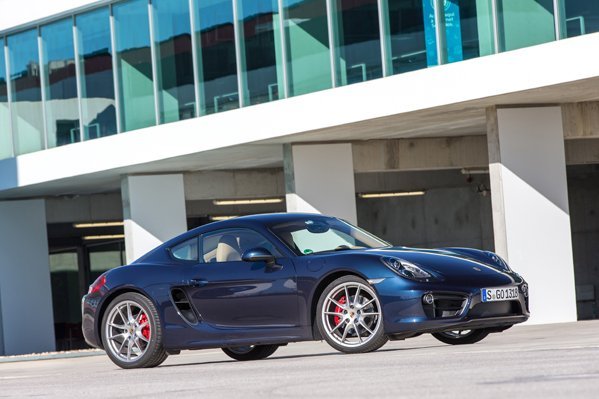 As I mentioned when reviewing the 4C, this price bracket has no shortage of excellent enthusiast options. You have your pick of European sport sedans, supercharged pony cars and the Corvette, if horsepower is your thing. On this end of the spectrum, the Cayman sits more comfortably alongside the aforementioned Alfa. Both are small, relatively light (this is unfair to the truly lightweight 4C, but for the sake of argument, let’s go with it), and somewhat impractical. Now that Audi has vacated the segment, pickings are a bit slim, but at least the choice is simpler: Do you want loud, obnoxious and fun; or poised, refined and competent? If you prefer the former, the Alfa is for you. The latter, the Porsche. Drive them back-to-back. The instant you jump from the Alfa’s unassisted, muscle-conditioning steering to the Porsche’s two-fingers-will-do setup, you’ll understand where I’m coming from.

All told, Porsche has produced yet another excellent entry-level coupe. It may no longer be the default choice for those looking for a European two-seater for $65k, but Porsche can’t be blamed for the existence of competition, and we, as enthusiasts, are better off for it.

Porsche provided the Cayman, a full tank of gas and the photography for this review.