I’ve had a spate of mid-size sedan loaners recently, which made this new Legacy’s arrival on my doorstep especially timely. In a class that sees full redesigns churned out seemingly every year, the 2015 Legacy is the newest entrant yet. Unveiled at the Chicago show earlier this year, Subaru saw fit to thoroughly revamp the Legacy’s underpinnings, as well as pen new designs inside and out. How does it stack up? Read on to find out… 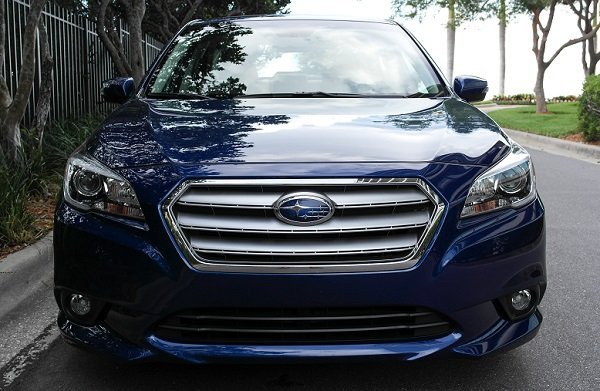 One of the previous Legacy’s biggest shortcomings was in the style department. A few mid-cycle refreshments helped the original design cope, but the blocky big-fender, small-wheel look was always somewhat less than pretty, even in upper trim levels. This new car eradicates those complaints and then some; it’s not as striking as the Fusion or Mazda 6, but up against the rest of the competition, the shape is nicely proportioned, handsome and tidy. For me, it’s somewhat akin to the current Accord, but with a professionally-handled nip and tuck. 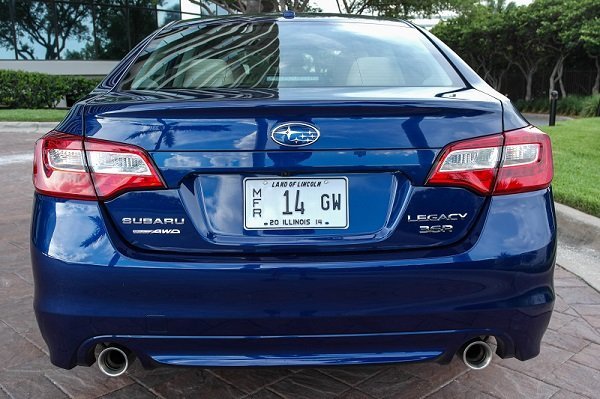 That tidy new sheetmetal casts virtually the same size shadow as the last car, but manages to be roomier inside. The interior’s design is just as clean-sheet as the exterior, and just as pleasant. A broad swath of touch panel makes up the top center stack area, with the StarLink-branded interface looking like a newer evolution of what Toyota’s been using for the past couple of years. Though functionally similar, the interface layout and design detail are both noticeably improved from the 2014 Entune system found in my FR-S and other Toyota products, though that slick-looking screen is hard to the touch and doesn’t respond easily to fingertip prods. Instead, you need to register touches with your digit laid flat, as if you were being finger-printed. Once I figured out that trick, the system proved easier to live with. 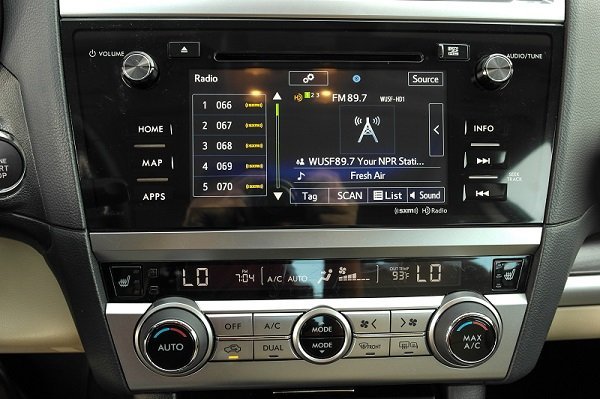 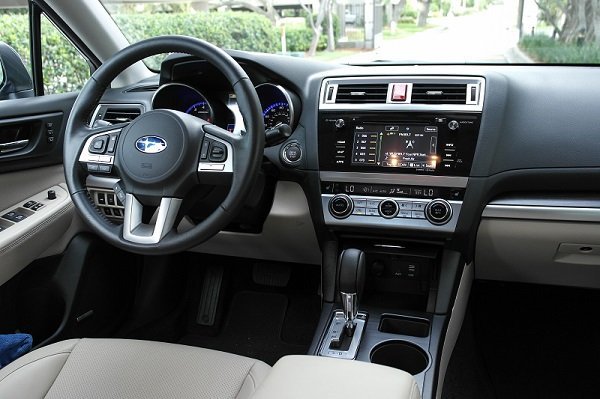 Our loaded tester was also loaded with buttons, many of which are for the comprehensive safety suite – including Subaru’s optional EyeSight front-facing camera system, which allows for pre-collision warning and collision mitigating braking, lane keep assist, and smart cruise control. Deciphering the controls for all of these systems can be tricky at first, though once figured out the overall dash layout is quite sensible and easily navigated. It’s also well-assembled, and features higher-end materials than you might expect – it feels in the upper reaches of its field for plastic and build quality. 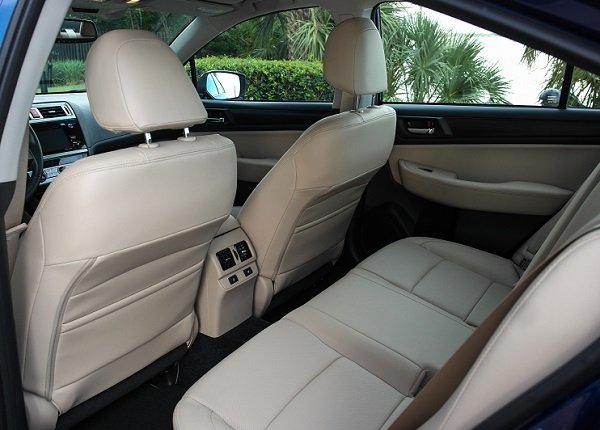 Returning for duty from the previous Legacy are four- and six-cylinder boxer powerplants and standard all-wheel drive, now mated exclusively to Lineartronic CVT transmissions. The CVT has quickly become a Subaru trademark, and the one in the Legacy adeptly mimics a traditional six-speed automatic when you summon more than about 50% throttle, or when you bring the paddle shifters into play – a nice touch. Paired to the six-pot of our tester, it never drones or groans wearily, either. 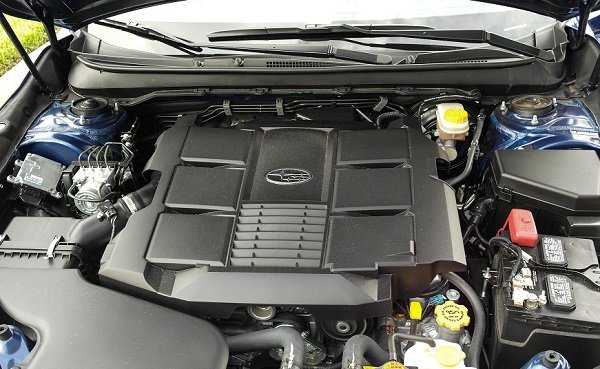 The six cylinder has decent punch, and is noteworthy in the midsize class for still being a six cylinder – only the Accord, Camry, Passat and 200 still offer such an option, and of those, only the 200’s V6 can also be paired with all-wheel-drive. The penalization that comes from choosing the 3.6-liter (aside from not sounding quite like a Porsche flat-six) can be found at the pumps – we averaged just 25 mpg during a 400-mile mix of highway and “city” driving, though honestly, nearly two-thirds of my driving was at steady highway speeds. Though a naturally aspirated or even turbo four-cylinder won’t haul around the 3,662-pound Legacy around with the same effortless authority as the six, it would probably return slightly better mileage. Choose your weapon carefully. Me? I’d probably still have the six. 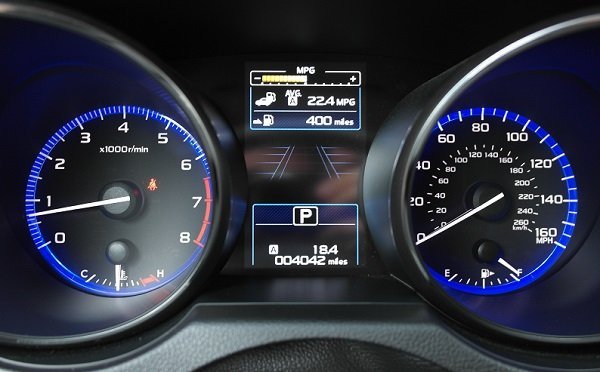 The Legacy, even in sporty-sounding 3.6R trim, isn’t a sports sedan, skewing more toward comfort than handling. Pitched into corners, it’ll hang on reasonably well at first, but dissolves into body roll and understeer soon after if you keep pushing. The whole arrangement feels set up for safety over thrills, which makes sense considering that four-door hooliganism can be had elsewhere in the Subaru lineup in the form of the WRX and STI, while the Legacy is meant to satisfy more mainstream tastes.

Driven more sensibly, the Legacy rides quite well, and the electric steering lacks feel (par for the course here) but is well-weighted. 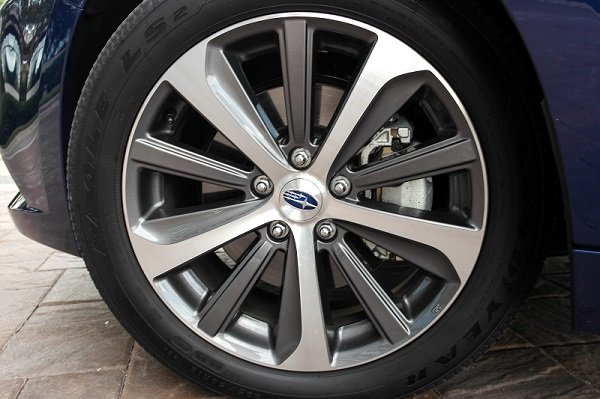 Our loaded 3.6R tester, at which every option plus the proverbial kitchen sink had been thrown, rang in at a quite-reasonable $32,585 sticker price. Competitive midsizers would feature some of the same upscale features at that price, but few would offer anything but a four-cylinder, and fewer still all-wheel-drive.

Factor in the company’s sensible-chic image and you’ll find that Subaru’s unveiled a killer app in the midsize segment where it once only offered a somewhat quirky-but-competent upstart. I suspect this new one will sell rather well, especially in Outback form. 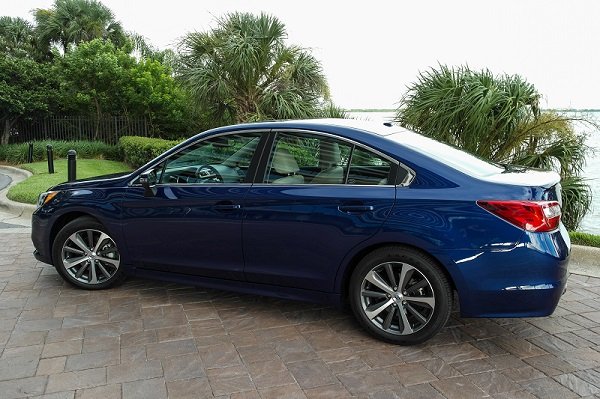 Subaru provided the vehicle for testing purposes and one tank of gas. Photos by the author.