Ok, “Giant Slayer” is going a bit far, but when it comes time for my annual “what ridiculous thing can Byron try to beat Miatas with?” piece, the answer can’t always be “Crosstour.” This year, I found that the MSCW’s normal spring autocross happened to be within the Soul loan period. A week earlier, it would have been a Mazda3; one or two later, and I’d have been in a Cayman S. At least the hamster-mobile is yellow—the appropriate hue for making lemonade.

Allow me to introduce the 2014 Soul!. To the eagle-eyed editors among you, I promise that’s properly punctuated. The “!” is the trim level, and if you must articulate it, Kia would prefer you say “Soul Exclaim” rather than embark on some Clarkson-esque quest to elongate it any further.  At this trim level, you get the 164hp, two-liter, GDI engine mated to a six-speed automatic transmission. To get a manual, you have to choose the “Base” trim (symbols being more expensive than words, apparently) and its 1.6L, 130hp engine. Some rodents are smaller than others.

Since it’s silly to learn this naming convention for exactly one vehicle in the Kia lineup, just suffice it to say that “!” means this sucker’s loaded, complete with the “Sun & Sound” package (is there an automaker left who has not bundled a stereo upgrade and a moonroof thusly?) and, no foolin’, “The Whole Shabang” package. This brings the total MSRP up to $26,195, but you won’t be wanting for features. At that price, you’re getting navigation, HIDs, a full-LCD gauge cluster, heated and ventilated front leather seats, heated rear seats and light-up speakers. Yes, speakers. 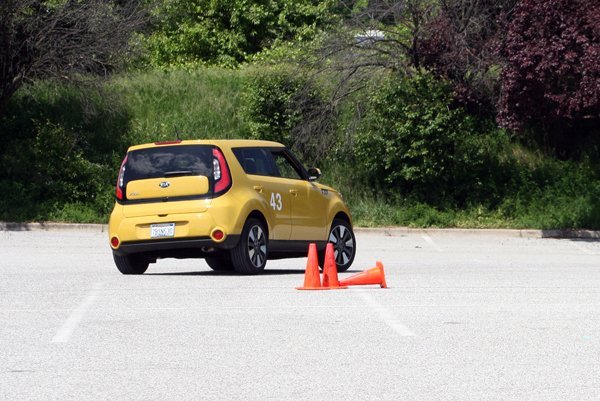 Twenty-six grand for a Soul? Yeah, it sounds like a lot for what we conventionally think of as a subcompact, but consider this: Despite being smaller, lighter and cheaper than a VW Golf, the Soul matches it on feature content and offers more passenger and cargo room. The only compromise here is the driveline—VW’s 1.8L boasts more torque and less intrusive NVH.

So, just how light is the Kia Soul? Try 2,800lbs with the “big” engine and the automatic. For a car this roomy, that’s phenomenal. In terms of power-to-weight, the Soul matches up with the likes of the MkIV GTI and the SVT Focus. Ten years ago, before the days of ubiquitous independent rear suspensions and turbocharged engines, the plucky Kia wouldn’t have been all that out-of-place in a sport compact comparison.

Ten years ago, mind you. 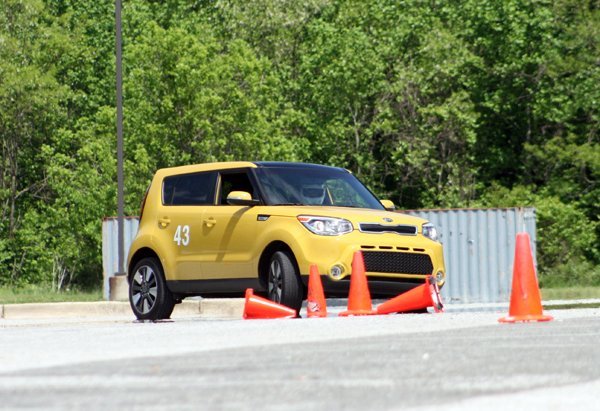 What really jumps out about the new Soul is how much more competently it drives compared to the earlier model. The steering is good—not just adequate for the segment, mind you. It goes where you point it and it does it with a minimum of fuss. The body roll is well-controlled and the ride is quite smooth. The rear suspension is still a Torsion beam, but it rides remarkably well for a car with such a short wheelbase.

The only fly in the ointment is the engine. It’s not lacking for power or anything as dramatic as that, but man, is it noisy.  It never feels inadequate, just unwilling.  It becomes loud and intrusive as it climbs beyond 3,000 RPM, and it never seems eager to go any higher. If I had to guess, I’d say Kia compromised a bit on engine isolation in the name of lower curb weight. Since the Soul’s box-like profile will never cut a particularly efficient hole in the air, the engineers have to gain mileage where they can. Even with those compromises, the Soul is only good for 23mpg in the city and 30 on the highway—and this isn’t some leftover boat-anchor of a drivetrain. It’s a black mark on an otherwise excellent experience, and one I certainly wouldn’t use to justify writing it off entirely. This is a great little car. 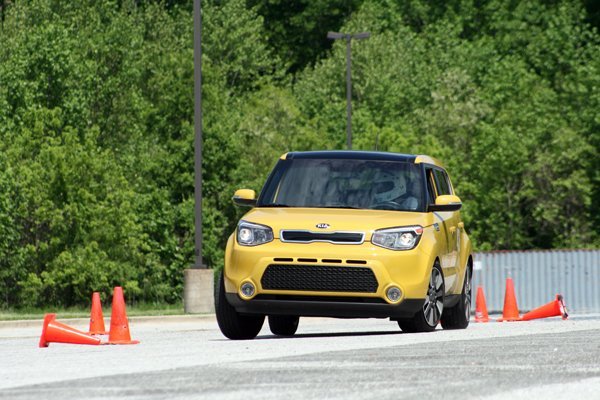 And what of my quest to not finish dead last against the endless swarms of Miatas? Well, the Soul acquitted itself fairly well. As usual, the day was broken into morning and afternoon events. In the morning, I finished 25th out of 34, and in the afternoon, 17th of 27, with my quickest time in the afternoon coming in roughly 9/10ths of a second better than my quickest in the morning. For those who prefer the fighter pilot style of kill tallying, I could have painted five Miatas, one Mazdaspeed3, one Mazda5, one Audi A3, one C5 Corvette, one Honda Accord, one TDI-powered Corrado, one E36 325i, one ’66 Corvair (no kidding), one RX-8, one Coyote Mustang,  one Volvo 850, one last-gen Taurus and one G35 on the Soul’s door.

This was a slow and obscenely technical course (FTDs were 48.xx at a venue where I’ve seen 29-second layouts), and the tight turns did not flatter the Soul’s width, high center of gravity and all-season tires.  Maintaining the little Kia’s momentum was a challenge, and it struggled to put power down coming out of the tightest corners, costing significant time. The hard left immediately before the straightaway that led to the finish was by far the Kia’s weakest part of the course, requiring either a wide arc to keep both wheels turning or a near-stop braking effort followed by extremely judicious use of throttle to avoid peg-legging out of the turn. My kingdom for a limited-slip differential (a ridiculous request in this application, I know).

So, is the Soul more than an appliance? I say yes. It’s a comfortable, practical, competent car with undeniable character and very few significant flaws. It’s not something I’d want to build for competitive motorsports at any level, but with some decent tires and maybe a little suspension work, it would do a respectable job chasing cones.

Kia provided the Soul and a free tank of gas for this review. Thanks as always to the Mazda Sportscar Club of Washington for putting on a safe, fun and educational event for local car enthusiasts.