The Toyota Camry was the best selling sedan in the United States for 2013, with over 408,000 units sold. This is the twelfth year straight that Toyota has held the #1 spot for sedan sales, besting the likes of the Honda Accord and Nissan Altima which round out the  top three. There are plenty of newcomers clamoring for consumer attention in the mid-sized sedan segment like the fantastic Ford Fusion, Mazda 6 and Kia Optima.

So what keeps the Camry at the #1 spot year after year, even with increased competition from other manufacturers? I spent a week with the 2014 Toyota Camry Hybrid SE to find out.

My first car was a hand-me-down 1992 Toyota Camry DX, given to me by my mother when I turned 17 in 1996.  It was black on grey with no clear coat on the paint, vinyl backed seats with cloth seating surfaces, and an AM/FM radio with no tape deck or CD player. The windows were manual, as were the door locks.  I treated my Camry like it was the most expensive vehicle on the planet. I changed my own oil in it, washed it every week and proudly drove it to high school and work.

On paper, there was absolutely nothing special about my Camry. In my mind though, I was driving a mini-Lexus. I always felt the Camry of that generation actually looked better than the Lexus ES300 of the time, and many people mistook it for  the Lexus on the outside. It was cheap to maintain, easy to drive,  and rock solid reliable. I eventually sold my Camry for a more enthusiast oriented vehicle when I was finally making a decent wage, but the fond memories of my Camry have stuck with me almost 18 years later.

Fond memories are one of the reasons that the Camry is such a sales success, as happy Camry owners will keep coming back to  Toyota dealerships when it’s time to replace their current model. Camry owners know that they can expect an economical, no-headache ownership experience. Still, Toyota has to keep the Camry fresh to capture the attention of repeat and conquest buyers. The introduction of the new 2014.5 Camry Hybrid SE Limited Edition is a perfect example of Toyota trying to appeal to more shoppers. 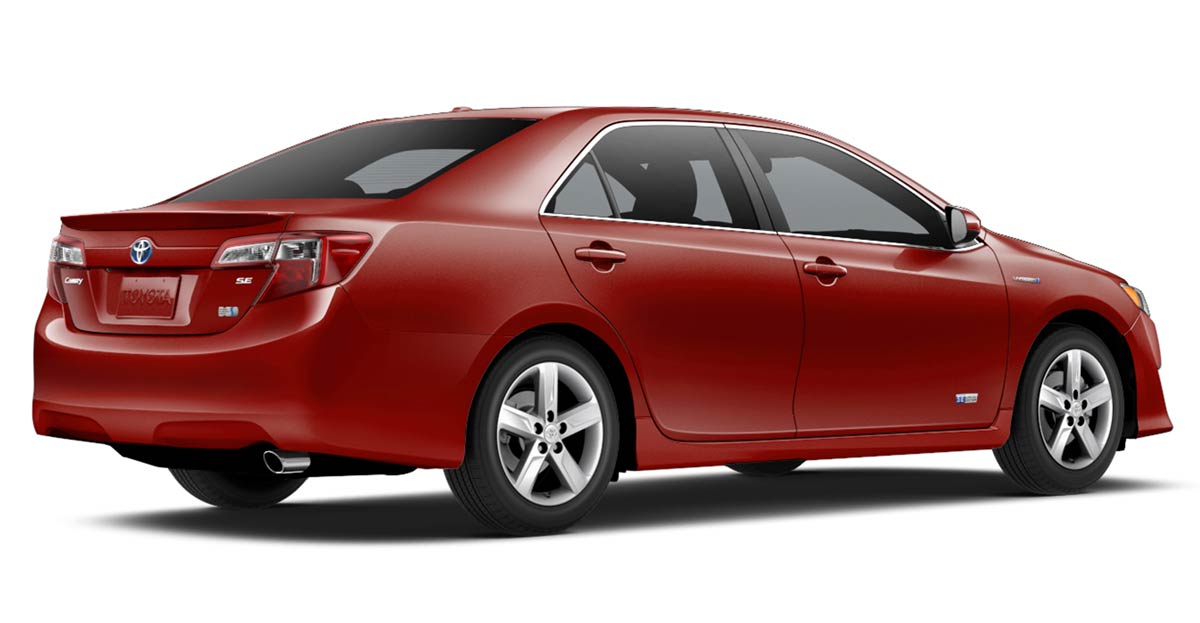 While these upgrades definitely make the Camry Hybrid SE Limited Edition look far more sporty than the pedestrian Hybid XLE model, the hybrid powertrain itself remains unchanged. Power is still generated by a 2.5-liter four-cylinder engine which is mated to the fantastic Toyota Hybrid Synergy drive system. The engine and hybrid system output a respectable  200-horsepower combined. The hybrid system is comprised of two electric motors. The primary electric motor is responsible for driving the front wheels through a CVT transmission, as well as generating electricity during engine braking. The secondary electric motor is responsible for start/stop functionality, battery recharging, and powering the primary electric motor. 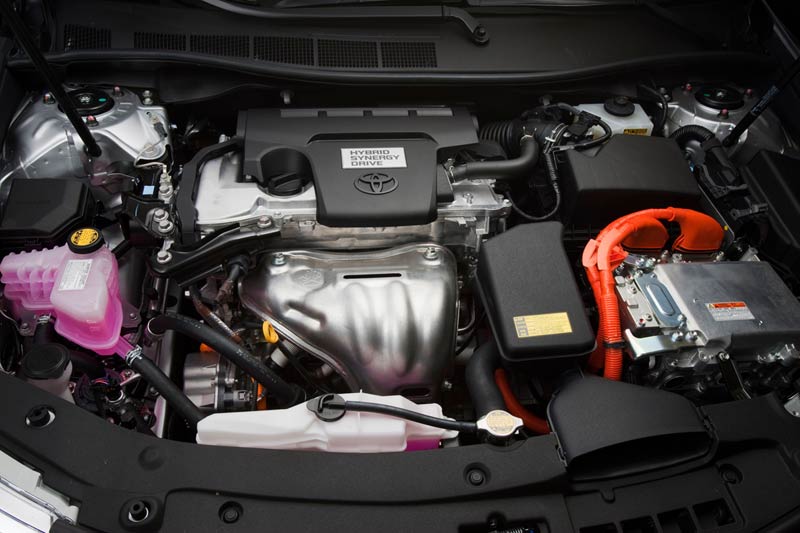 In the handling department, the Camry Hybrid SE LE isn’t the most engaging vehicle to drive and drivers will never mistake it for a sports sedan, despite the SE badging. This is a hybrid family sedan, where economy and comfort are the name of the game. The SE specific performance tires do help give the car slightly sharper handling than some other hybrids I’ve driven, and the ride is firm but smooth. Braking is among the best I’ve experienced in a hybrid vehicle, and never felt overly grabby.

Interior wise, the Camry Hybrid SE LE isn’t a bad place to be during the commute. Gauges are simple, but extremely easy to read. The power front seats are very supportive and there are enough adjustments available to find a comfortable seating position for individuals of any size. The rear seat is as expected in a mid-sized sedan, and provides enough room that rear seat passengers can keep their knees out the back of the front seats unless you have a very tall driver or passenger.

The biggest selling point for the Camry Hybrid SE LE is of course the promise of fantastic fuel economy. The EPA rates the 2014 Camry Hybrid at 43 mpg city/39 mpg highway/41 mpg combined. I was able to easily beat the combined economy rating during my 27 mile each way commute with a week long average of 42.3 mpg. This was thanks in part to the Camry Hybrid’s EV Drive mode which allows the car to operate on electric power only for up to 1.6 miles, at speeds of up to 25 mph. In the afternoon stop and go traffic, this mode was utilized heavily in conjunction with the standard hybrid drive operation. Transition from gas to EV  modes and back again is absolutely seamless to the driver. 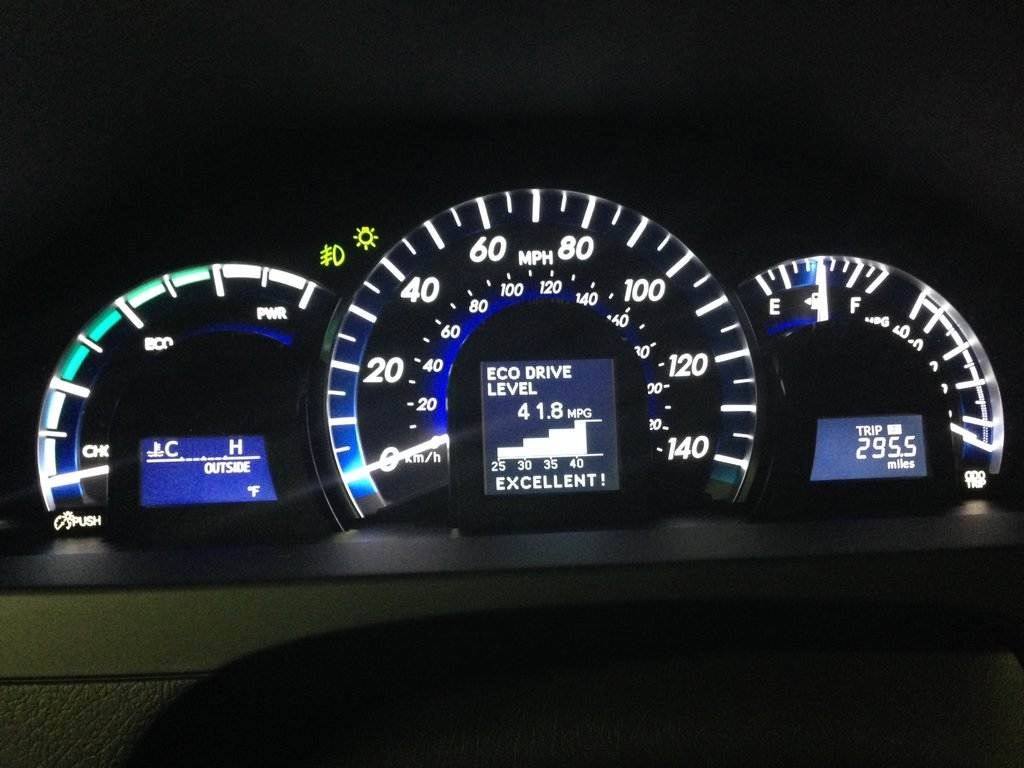 My only complaint about the hybrid system is that the EV Drive mode is almost useless if you have anything but a feather touch on the gas pedal. If the Camry SE Hybrid even thinks you want to accelerate at anything faster than a snail’s pace, the EV Drive mode will shut off and kick you into gasoline mode, followed by a guilt inducing message on the display that you are driving too hard.

I really enjoyed the Camry Hybrid SE Limited Edition during the week I spent driving it. Toyota has done a great job of keeping it simple, while also keeping it fresh. I always felt comfortable driving the car, and was kept entertained in stop-and-go traffic with all the latest tech and infotainment features. On top of that, Toyota has done a fantastic job tuning and perfecting their Hybrid Synergy drive over the years, and has delivered on the promise of great fuel economy at a reasonable price. While there are many other hybrid offerings out there in the mid-size sedan segment, the Toyota Camry Hybrid still remains the one to beat, and is probably the hybrid I’d buy for my own garage.

Prices for the 2014.5 Toyota Camry Hybrid SE Limited Edition start at $27,945, with an available $2215 upgrade package that includes a moonroof, navigation and the Entune Apps suite.

Toyota provided this vehicle to Speed:Sport:Life along with a full tank of gas for the purpose of review.