When Volkswagen offered to fly me up to drive a full smattering of their 2015 model lineup around Northern Virginia’s rolling hills and the quaint towns they are dotted with, they were ostensibly asking me to really focus on just two of those 2015 models – the fully electric e-Golf, and the refreshed Jetta. Still, though it already had its official launch and has been on sale for a few months now, I was also eager to sample the current GTI. Here’s a recap of what I drove, put in order from “really, really liked it” to “liked it”. There wasn’t a dud in the bunch, honestly, though I admit to steering clear of models like the Passat and Tiguan, which I’d already spent time in recently, and others that weren’t significantly changed for the 2015 model year.

So, full disclosure – the car I enjoyed driving the most was actually the 2015 GTI. But it’s too predictable to put that car in first place. Instead, the e-Golf tops this list for the following reason: significance. 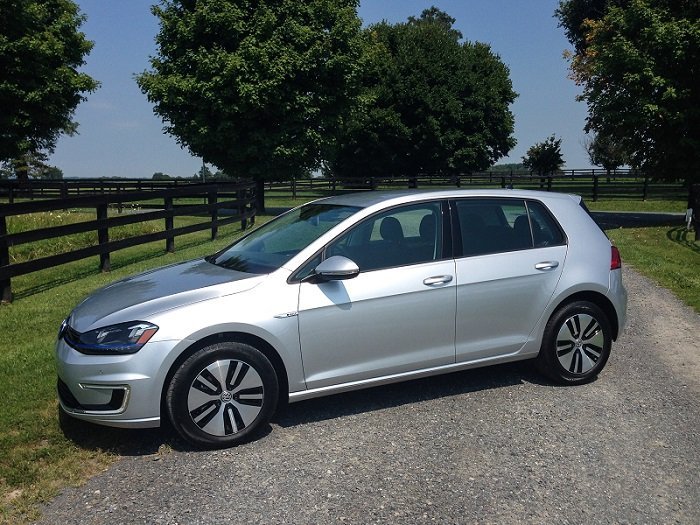 It doesn’t seem that significant a car at first glance. After all, it’s just a Golf with an electric motor and battery in place of a gasoline or diesel 4-cylinder, right? Well, yes – and VW’s folks would be just fine if you came to the same conclusion. But somehow, the e-Golf manages to be more than the sum of its parts, which is one of the marks of a truly great automobile. You see, the e-Golf surprised me for the simple fact that it is just a Golf that burns kilowatts instead of liquid fuel. It drives exactly like a standard Golf, which is to say comfortably, competently, and without vice – but perhaps even better. Better because of that instant 199 lb-ft of torque available from rest that oooozes you up to 50 or 60 mph with so little effort. And the sheer quietness of the thing! This was my first encounter with a fully electric car, so excuse the fawning for a second, but silence really is golden. It made me smile far wider than I expected it to. 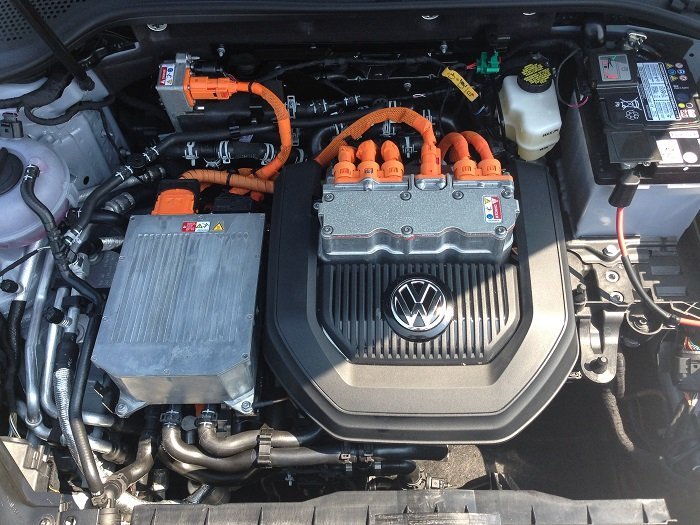 Without being subjected to the graunching sounds of an internal combustion engine, you can pay attention to other things – like how well this Golf VII chassis rides. It’s buttery smooth, yet free of float or wallow.  You’ll notice that because the battery pack’s weight is situated low in the chassis, the e-Golf’s cornering attitude is unexpectedly flat and it points into turns eagerly. And you’ll notice that they really got this Mk7’s interior just right, not just in materials or ergonomics, but also design and feature content. 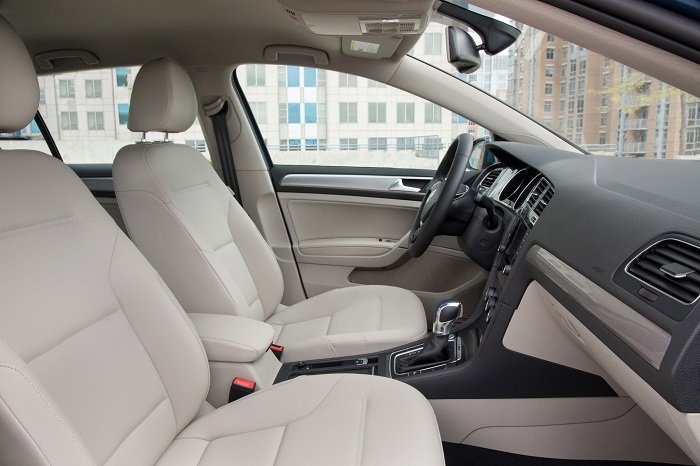 How compelling this package will seem to buyers is the ultimate question, perhaps proving once and for all whether shoppers are willing to purchase vehicles of this type on competence alone (in which case, the e-Golf should do quite well) or if a bit of “whizz-bang!” design slickness is a necessary part of it, as evidenced by the other EVs currently on the market. Either way, at $299/month to lease (the required down payment details are not readily available as I write this) and a fast-charge option that can replenish the battery back to 80% charge in just 30 minutes, there’s plenty to endear the e-Golf to the left side of your brain. Hopefully the right will feel the same way. 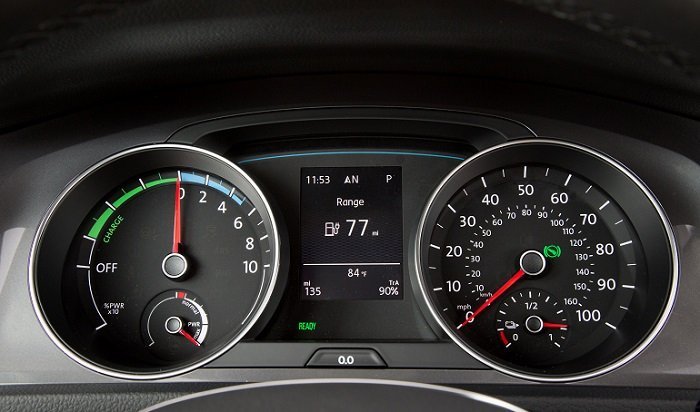 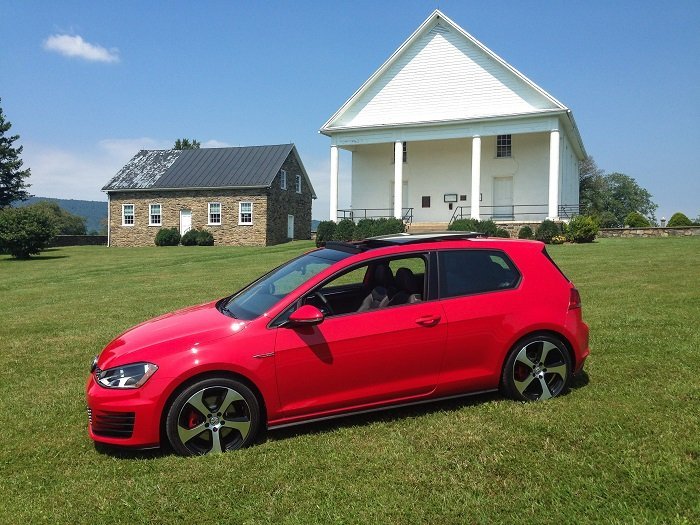 There’s little left to be said of the new Golf GTI that hasn’t already been said many times elsewhere; it’s the best all-around performance package available right now for around $30,000 or less, and I admit that wholeheartedly as an owner of competitive vehicle that occupies the same market territory. The GTI is a fully balanced package, with spirited, athletic handling, a tractable turbocharged engine that delivers just enough shove to put a smile on your face, a snick-snick gearbox and great brakes. Oh, and the rest of the car isn’t too shabby either, especially the wedgy yet finely detailed styling, handsomely trimmed and equipped interior (with great seats), and a more than decent stereo- in Fender-branded guise, anyway. 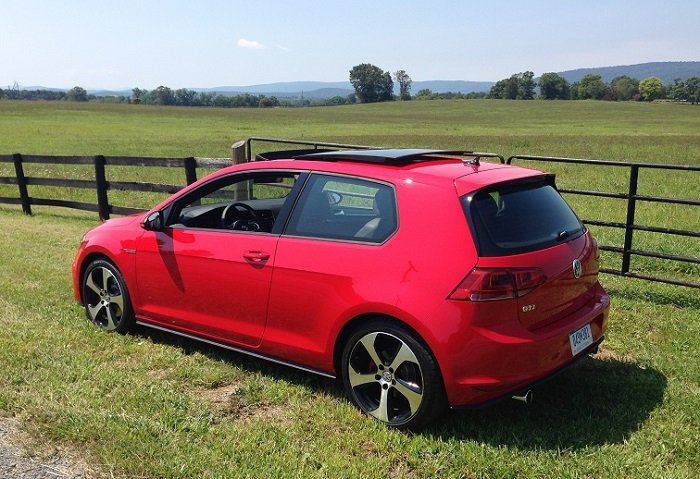 Similar to the last two iterations of the GTI that Volkswagen has sold in this country, now distilled down to the most refined elements of fun, luxury, and value, the Mk7 is a wonderful car. 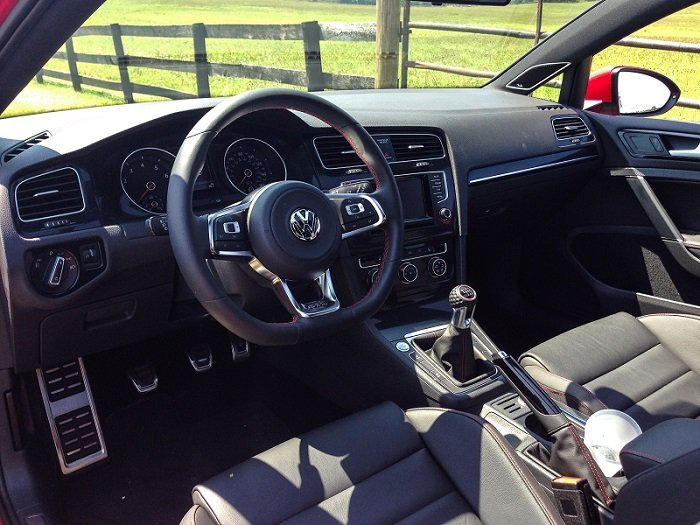 There’s more to the refreshed 2015 Jetta than meets the eye, at least in the TDI’s case. It uses the updated EA288 diesel engine that powers the new Mk7 Golf TDI, good for 46 MPG highway (an improvement of 4 MPG from last year) with the six-speed manual my tester was equipped with. 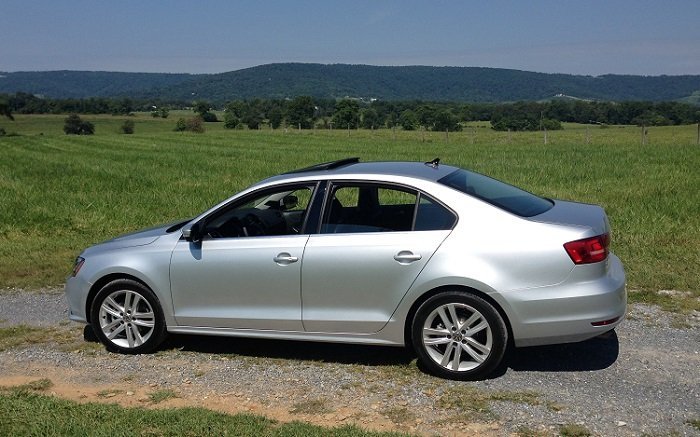 The new front fascia, including LED-bedazzled headlights, isn’t readily noticeable at a glance, but side by side with the old car, the new one does come across as slightly more modern. Inside, attention was paid to the areas that had previously been panned in the Mk6 Jetta – namely material quality. The door panels themselves still aren’t the same wonderfully squishy material as the dash top, but both armrests are comfortably trimmed, and piano black and silver accents lift the rest of the previously dour interior. Equipment levels are way up for the money, and are now arguably among the best in the mainstream small-car business. The standard 1.8T engine (not counting the special order, loss-leader 2.0L naturally-aspirated unit) also boasts the segment’s best power and torque figures. 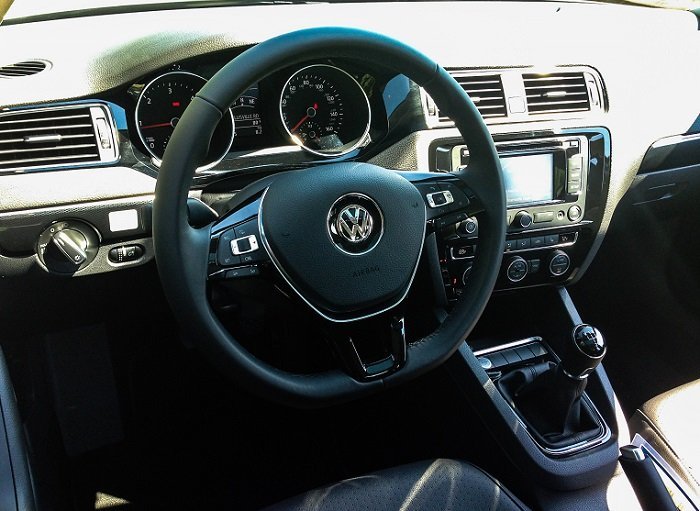 Back to the diesel – that new EA288 power unit puts out 150 horsepower and 236 lb-ft of torque, 10 horsepower more than before thanks to simplified catalytic converters (among a litany of other tiny changes to the fuel and induction systems) that help reduce exhaust back pressure. Power delivery is smooth and quite potent from low revs, tapering off less noticeably toward redline than the previous diesel. The six-speed manual ‘box is smooth and pleasant to row, making it easy to keep the turbo on song. 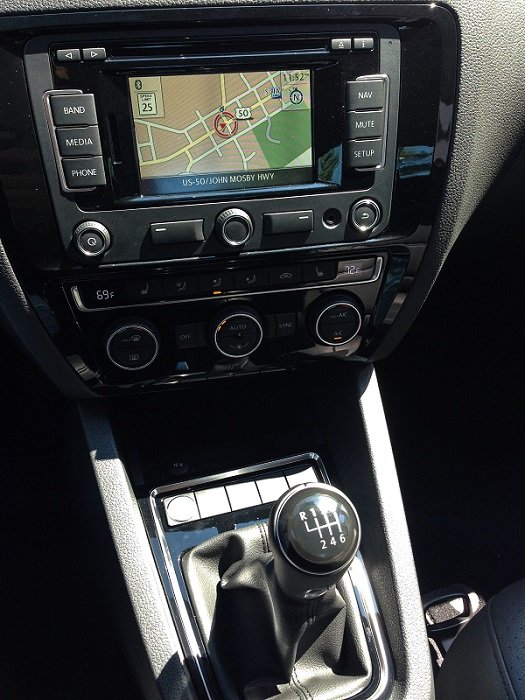 Diesel clatter is almost non-existent, even with the windows down and sunroof cracked, with just a faint turbo whistle under boost and a chattering diverter valve upon throttle lift the only indications that something interesting resides under the hood. Elsewhere, the 2015 TDI is as pleasant on the road as the 1.8T SEL driven later in the day, and outlined below. And the TDI’s trump card – fantastic fuel economy no matter what you throw at it – is still present and accounted for. A spirited 40-minute drive over hilly, winding roads produced a 44 MPG average figure, according to the trip computer. 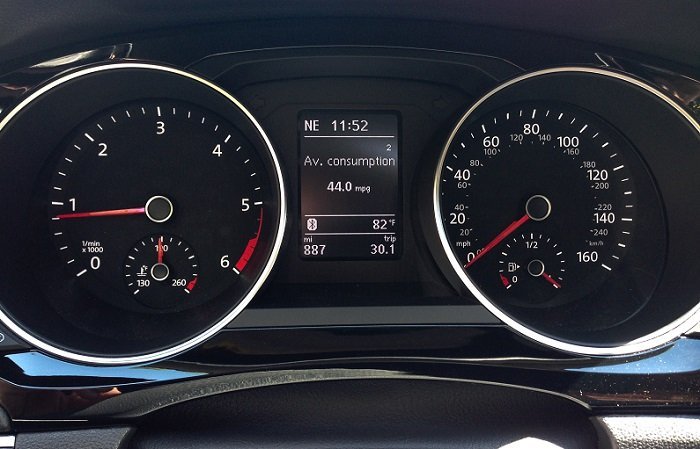 The exact same car as the 3-door GTI outlined above, save for the gearbox, which demotes it a few places on my scale from “great” to merely “quite good”. Both gearboxes have their supporters, some more staunch than others, but the fact that you can pick either transmission and get the same fundamentally fantastic car is encouraging. My interests lie primarily with manuals given the choice, simply for the engagement factor, and when that manual is as good as the one in the GTI, the choice becomes a no-brainer. Still, those who choose the DSG will not be disappointed – it’s a great gearbox in its own right. It’s just a little too competent and polished for its own good, at least for this driver. 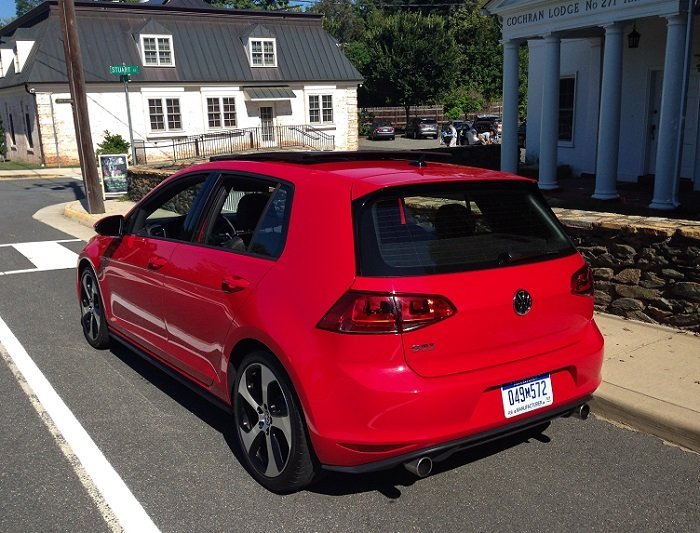 The fact that the Jetta in popular SE guise resides at the bottom of my list shouldn’t be taken as a ding against it. The 1.8T (170 hp/184 lb-ft) and 6-speed automatic are a perfect match for the volume model’s relaxed demeanor, and the improvements for 2015 are noticeable from behind the wheel. It’s just that the other four models above are a little bit more engaging. Still, there’s a lot to like about the new Jetta SE and SEL.

First of all, the thing is quiet – to use an over-quoted description, it’s bank-vault quiet at speed. Tire and wind noise are both well muffled up to and beyond 60 mph, and cracked pavement and undulations are dispatched with well-damped precision. The body leaned gently in bends on our tester’s 17-inch wheels, but this isn’t the performance model, anyway – the GLI is more apt to be judged on those merits. Weekend cone dodging wouldn’t interest this Jetta in the way it might a Mazda 3, at least not right out of the box, but that’s of little consequence to the Jetta’s target demographic.

The interior renovations and better-honed driving dynamics truly recall the character of the Mk5 Jetta – that of a competent, comfortable, and solidly-built German sedan that drives like a bigger, more expensive car than it is. The rough edges of the early Mk6 Jetta seem to have finally been polished over completely, and VW would likely let the evidence of interior cost-cutting and bargain engineering recede into the rearview mirror – where they truly belong. 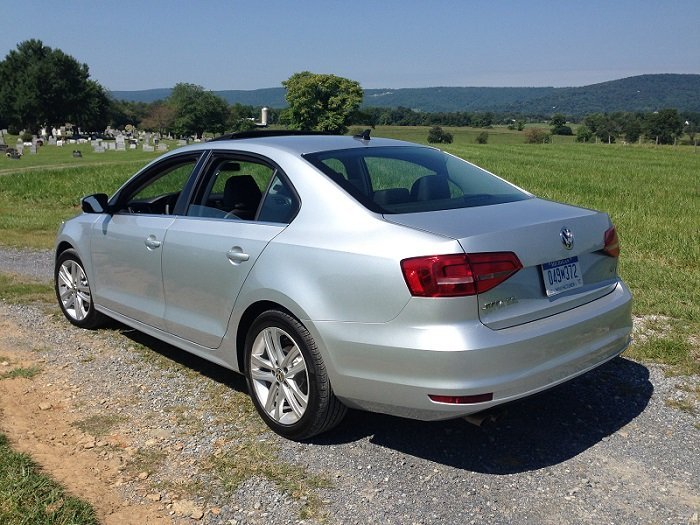 Volkswagen provided food, lodging, and travel to and from Virginia for the author for this event.