2014 370Z NISMO, we hardly knew ye. Just last year, we were touting your revised underbody spoilers, wheels and rear wing, and now as we ring in the 2015 model year, Nissan has quietly ushered in a new 370Z NISMO with revised underbody spoilers, wheels, and a rear wing. My, how things change. Still, whether you’re discussing MY13, 14 or 15, the car beneath the body kit remains the same burly, 350-horsepower 2-seater with a stick and rear-wheel drive. The stuff S:S:L dreams are made of, no? Read on to find out… 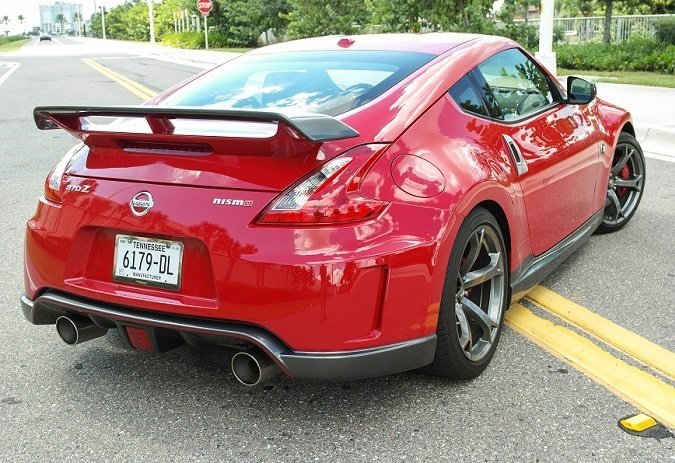 Perhaps because of the rapid change the auto industry has exhibited in the five model years since the current Z was introduced, the NISMO has a delightfully “old school” feel to it. The interior is wonderfully simple – cloth seats and not a single touchscreen to be found. Instead, you get a slew of gauges (though I’d happily change out the dash-top voltmeter for something more useful). You can only get the powertrain one way – a 6-speed manual driving a big, naturally aspirated V6. That is, until next year, when a 7-speed automatic becomes available. 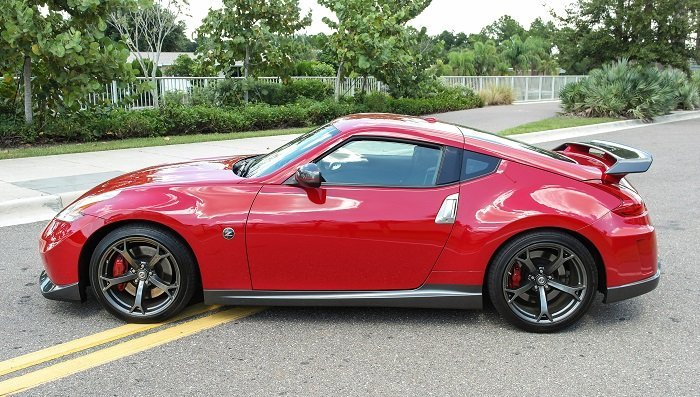 Power delivery is heady, though due to the VQ37’s high-revving nature, it’s easy to mistake as being a bit light on low-end torque. We can probably thank the widespread nature of powertrain “pressurization” elsewhere in the industry for that: we’ve gotten spoiled by the instant torque hit that turbocharging now provides. But in its defense, the naturally aspirated 3.7 powering the NISMO develops its power in a smooth, linear fashion, and it sounds sweet doing it. In fact, on a special model like this, we’d even accept a bit more exhaust sound being let into the cabin. 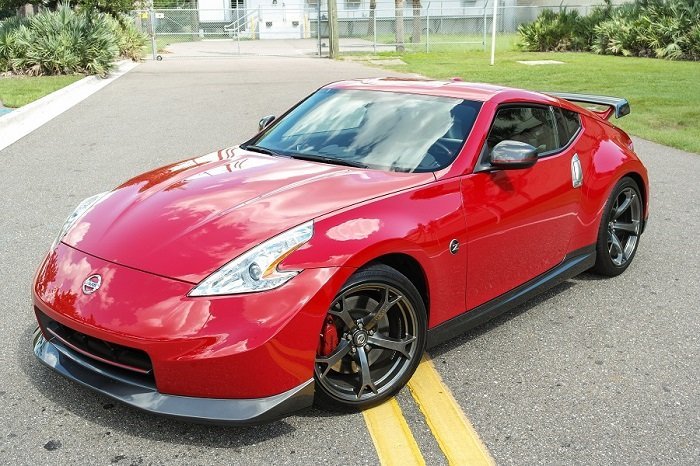 Nissan’s much discussed but rarely copied “SynchroRev Match” auto-blip system is standard equipment on the NISMO, and while it might be easy to write off as gimmicky in concept, in practice, it’s fantastic. Perfectly judged every time, it frees up your right foot to focus on modulating those beefy 4-pot, 14-inch front brakes. The shifter’s throws are relatively short and smooth, though the clutch is heavily sprung and a bit tricky to release smoothly, partly due to the angle your leg’s at from sitting on the floor. After a day’s acclimation, though, it became second nature. 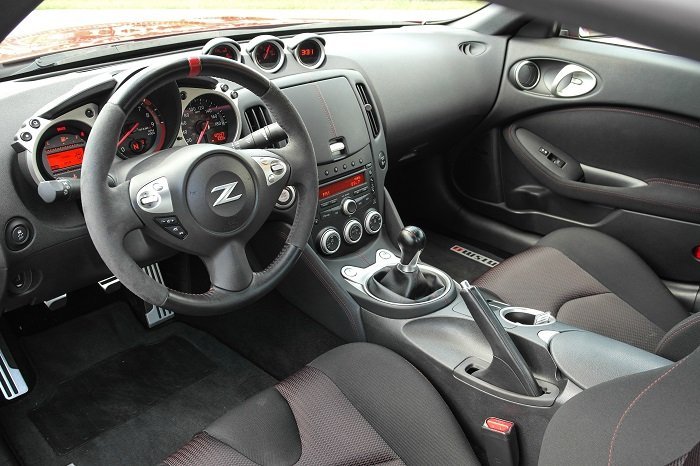 The hydraulic power steering is heavier than in recent electrically-boosted cars, and sends honest-to-God feedback through the suede rimmed wheel – it actually wriggles with info, enough so to make even a modern Porsche jealous. Handling limits are quite high on the road, but the chassis balance tends more toward “drift” than “push” when space allows you to surpass those initial grip levels. The Z is as happy to cut its tail out as it is to play a corner neat and tidy; happier, in fact.

Speaking of Porsche, most of us have probably seen the Chris Harris video comparing the FR-S/BRZ and 370Z with perhaps the most compelling used sports car on the market, the Cayman S. Mr. Harris’ conclusion was that dynamically, the FR-S and Cayman play in a different league than the Z, though for outright performance, the Z’s on-paper stats make a case for themselves. The market and price points for the sports cars mentioned in that video are somewhat different here in the US to Chris’s native UK. After all, over there, the Z and GT86 (FR-S) are priced somewhat similarly, though over here, they’re further apart. We’ve also got a smattering of domestic ponycars that occupy a similar market space, but we’ll leave them out of this discussion for simplicity’s sake.

I feel qualified to weigh in on Harris’ comparison, for a few reasons. You see, I’ve owned two out of the three vehicles in question. And with them, I’ve been lucky enough to check off just about every big automotive “bucket list” item imaginable, which has given me a pretty good understanding of what they’re like under the skin. My Cayman S saw frequent autocross outings, a track day at Sebring, and various long-distance road trips, including one to the Tail of the Dragon in North Carolina (thanks again for the speeding ticket, Tennessee). The FR-S, which I’ve owned since May, has also been regularly flogged at autocrosses (but no track days thus far) and has seen its share of spirited miles. When we were in Germany last summer, I was able to rent its European cousin, the aforementioned GT86, and flog it around the Nurburgerkingring and Autobahn. To say I’ve spent some time in the cars would be an understatement. 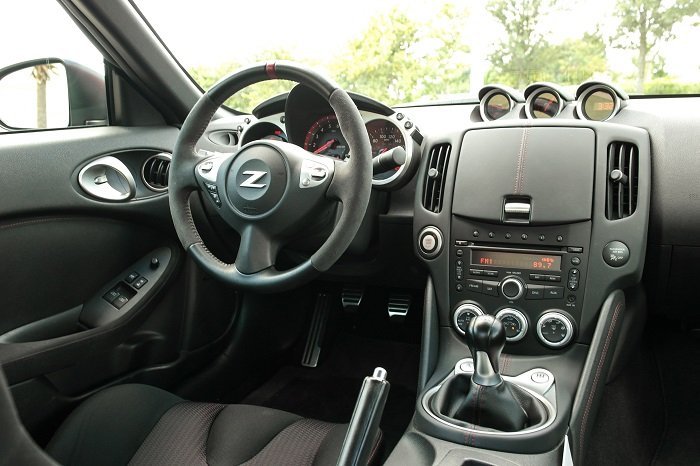 My time in 370Zs has been more limited. I’d only driven them briefly before this occasion, and to be honest came to much the same conclusion as Harris did – decent performance for the money, but lacking a certain X factor that brought it to the next level of specialness. After my time in the NISMO package, though, I’m prompted to say that it brings back that “specialness” lacking in the base car. There’s a real sense of occasion about it. The interior, for example, is a far more special place to sit than is my FR-S’. And I can’t help but feel that, while its place as a driver’s car (and a damn fun one at that) has been cemented, the FR-S as an “object” falls short of the NISMO and the Cayman. It’s less of a thing to desire and admire, and more just a really entertaining appliance. Walking out to the Cayman each day felt special, and even though its styling is a bit more tongue-in-cheek, I got the same feeling seeing the Z in the parking lot after a long day. 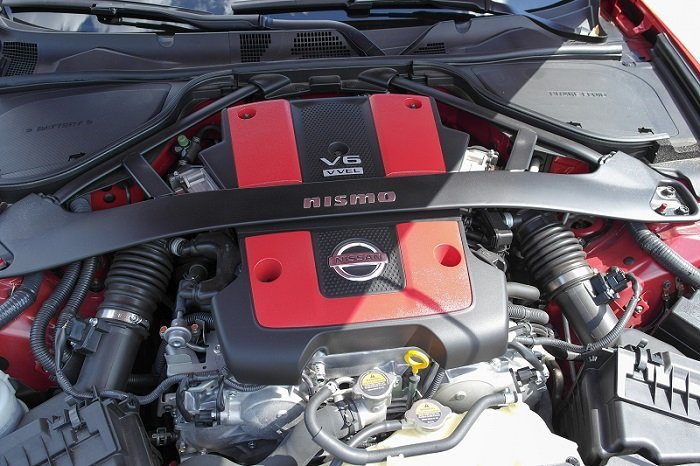 Is it worth it to wait for the slightly restyled 2015 NISMO edition? That’s a call only the buyer can make, but in my eyes, it’s sound judgment to go for the current car, unless your needs specifically call for navigation or an automatic transmission, neither of which are available on the 2014. The fact that a well-timed purchase will probably result in a handsome savings off the sticker only further solidifies my recommendation of the current car. It’s a blast, and it deserves a sports car buyer’s attention. 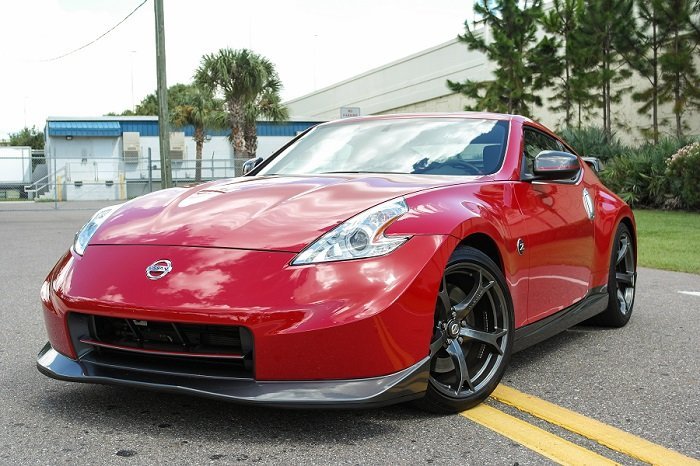