Much has been made of the German Big Three’s move toward the mainstream in terms of price; at no time in history has one of these luxury marques been more attainable by the non-wealthy (in the US at least). But most of the opinions voiced in the press have been somewhat negative, at least from a purist’s perspective. “What’s the point of an aspirational brand if any middle management type can afford one”, they argue. We spent a week with the CLA250 in the hopes we could separate the editorial banter from the car underneath.

Looking around the CLA, it’s not immediately apparent that this is the inexpensive model in Mercedes-Benz’s lineup. It’s got the fastback styling and frameless side windows of the upmarket CLS after which it’s modelled, and although car guys and gals will be quick to point out the nose-biased, front wheel drive proportions, to the person on the street it’ll simply look like a stylish Mercedes product. I think it’s pretty handsome, and found the greenhouse and rear-three-quarter view to be mildly reminiscent of the old “Ponton” W120/121 cars of the 50s and 60s. 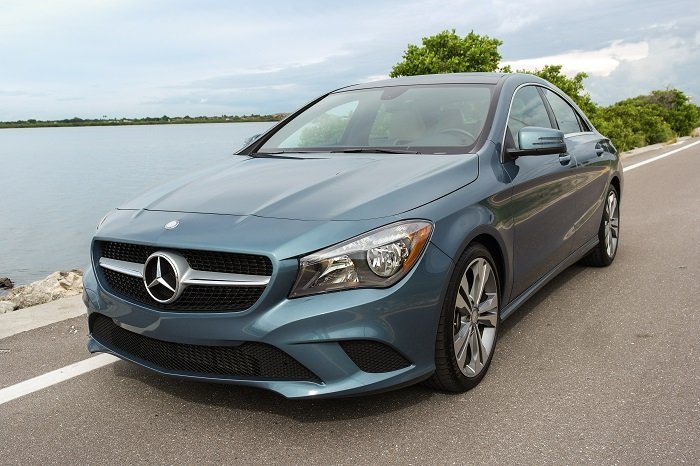 Inside, the story is much the same. The design is evocative of something much more expensive, and it holds up well against its near-luxury rivals. There’s a varied mix of surfaces here that seek to emulate the upmarket leathers, woods and brushed metals from its bigger Benz brothers, which forms a nice alternative to the typical monotone black interiors so common at this price point. As such, the CLA’s overall cabin aesthetic easily gets the better of its main rivals, the Audi A3 and BMW 320i (a front-wheel-drive 1 series sedan that lines up directly against the CLA is imminent), though panel fit and finish on the A3 seem a smidge better. 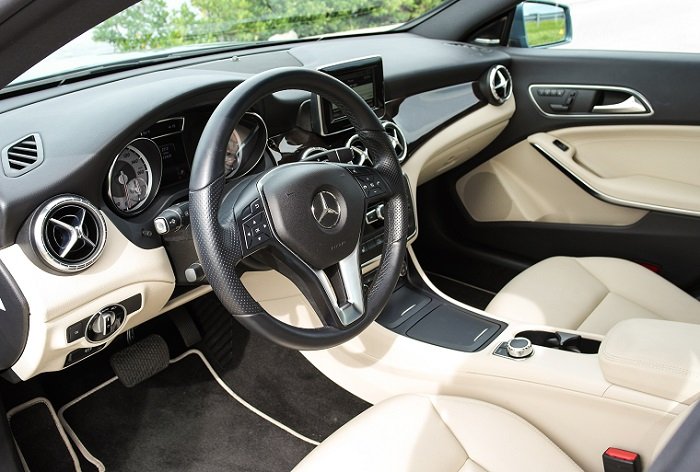 Like its German rivals, feature content is somewhat of a mixed bag; our car had assorted niceties like a panoramic sunroof, standard wheel-mounted paddle shifters (you’ll pay extra for those on the BMW and Audi), a Harman Kardon stereo and heated seats. Conversely, things like a backup camera or navigation with a larger, 7-inch display require a further cash outlay beyond our car’s $36,700 as-tested price. Those two items, along with a few other goodies, come bundled in a $2,370 Multimedia package – though there is an available standalone Becker navigation upgrade for the base 5.8-inch screen, for a more reasonable $800. The CLA really needs that backup camera, though – due to the curvy proportions and smallish greenhouse, rearward visibility can be tricky. Equipped as it was, our car was a bit of an odd duck – you’re far more likely to find CLAs on dealer lots with the optional extras listed above than you would a scantily-clad model like this one. 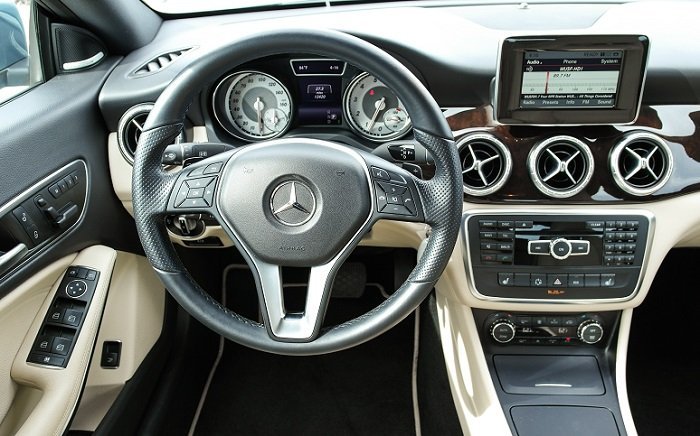 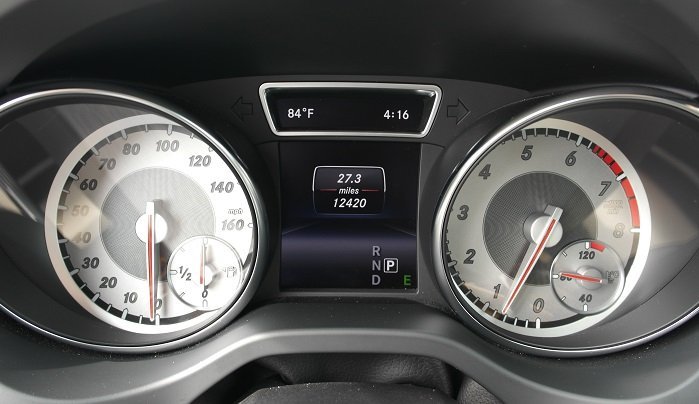 The “baby” Benz lives up to its title when it comes to size – its abbreviated length makes it a doddle to park in town, though you pay for that wieldy-ness with limited rear legroom. Granted, this author is taller than most at 6’4”, but I was unable to sit behind myself without splayed legs. If you’re going to be regularly transporting 6-plus footers in the back seat, it’d be worth your while to step up to a C-class. However, it’s unlikely the CLA’s target audience will be using the back seats to transport anything much larger than a French Bulldog. M-B’s adoption of a “coupe” descriptor for the CLA model line further reinforces that point. 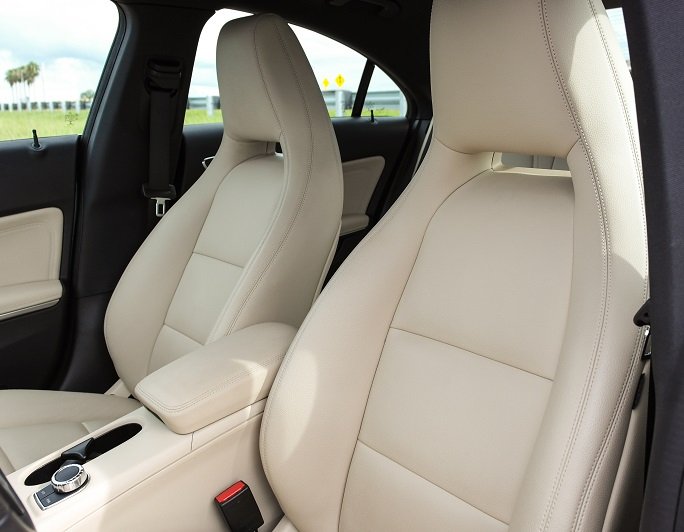 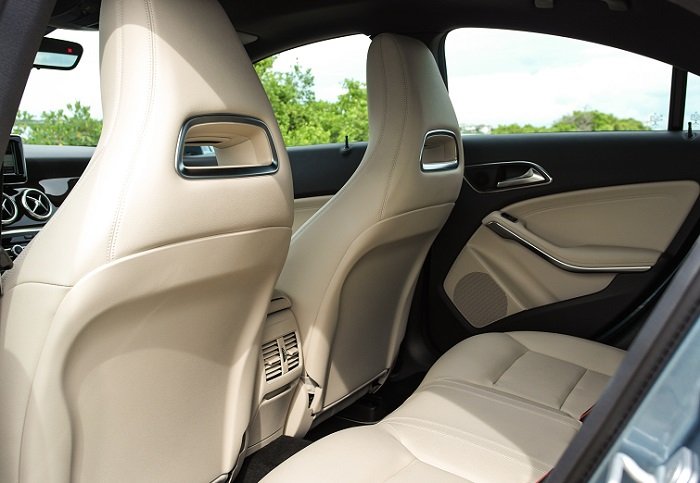 Mercedes’ traditional on-road demeanor has hewed closer to the comfortable, luxurious end of the spectrum (aside from its sportier AMG models, of course) but this CLA was apparently tuned to deliver an overt impression of sportiness. As a result, body motions are tightened down to a minimum, and even hard cornering reveals low levels of body roll. The steering weight is on the heavy side, but it’s geared quick enough to point the nose into corners eagerly. 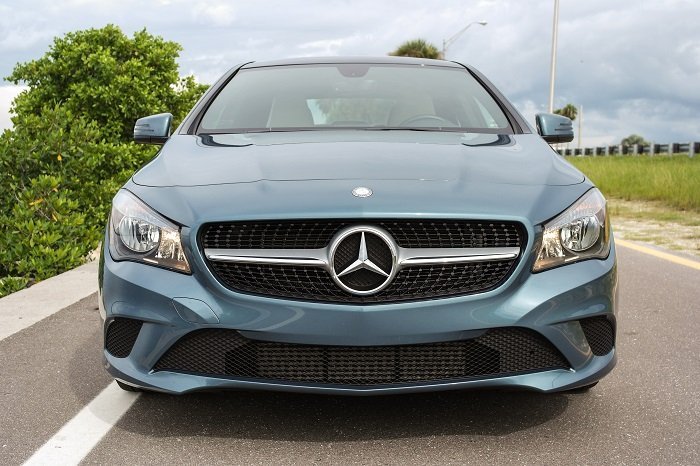 The price to be paid for athletic responses is usually ride comfort, and on optional 18” wheels and low-profile rubber, our car’s ride was firm to the point of being harsh. Road imperfections rattle the driver’s teeth and the interior panels in equal measure, and large potholes were best avoided. In creating the US-market CLA, Mercedes specified the harder of the two available suspension setups offered in Europe – a move that seems like an odd choice for a vehicle whose mission is not sporting in nature, especially for use in a country with less-than-pristine road surfaces. It’s likely that the 17” wheel and tire package that comes standard on the CLA250 would improve the ride quality, and even though you might sacrifice a bit of style, the 17s would be my personal choice. That, or an imported set of softer Euro-market springs. 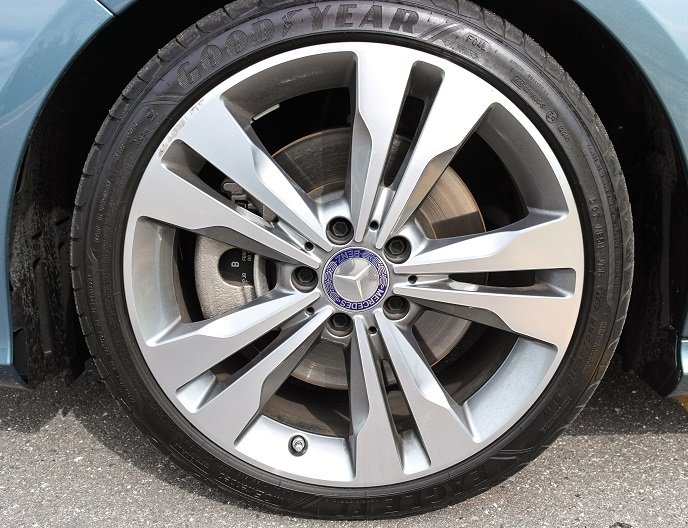 The powertrain here is a rapidly becoming the industry de facto – a 2-liter turbocharged four-cylinder hooked to a dual-clutch automatic transmission. In the CLA’s case, that transmission is a seven-speed unit controlled by paddles on the wheel or an electronic column-mounted stalk that can be found elsewhere in the Mercedes lineup. The transmission can be cycled between three modes – Eco, Sport and Manual – and I found Eco to be the most agreeable and transparent in day-to-day driving. The 2-liter four-cylinder churns out 208 horsepower and 258 lb-ft of torque, which is enough to tote around the CLA’s 3,262 pounds with ease. Besides, hardcore speed duties are carried out by the CLA45 AMG and its mega 360-hp four-pot, so the CLA250 can occupy the middle ground. To put it in perspective against its rivals, the 250 feels quicker than a 320i or A3 1.8T, but not quite as quick as the 328i or A3 2.0T Quattro, both of which have higher base prices. 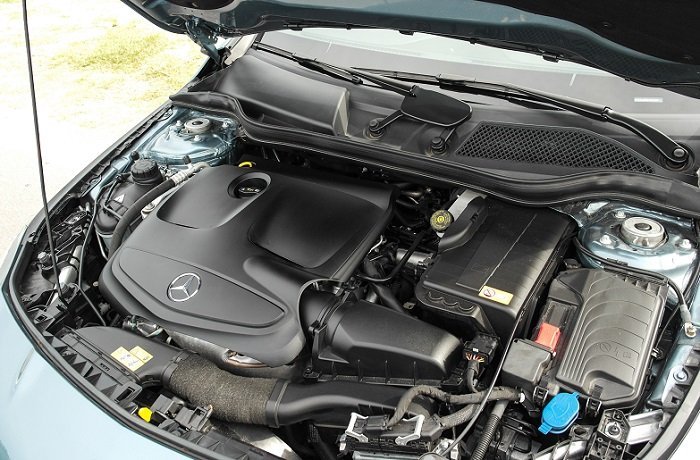 To the average new car shopper, it’s easy to see the appeal of the CLA. What we enthusiasts might view as a bit of a compromise, dynamically, is just as likely to be interpreted as “sporty” by the general market. Its wieldy size and high fuel economy numbers make it a boon for urban commuting. There’s more style on offer, inside and out, than its close competitors, and while another competent sedan from a non-luxury brand like a Mazda 6, Buick Regal or Volkswagen CC might offer more space and content for less money, they certainly don’t offer the luxury dealership experience included as part of the Mercedes brand, or perhaps most importantly, the three-pointed star on the trunk. This, apparently, can make all the difference. 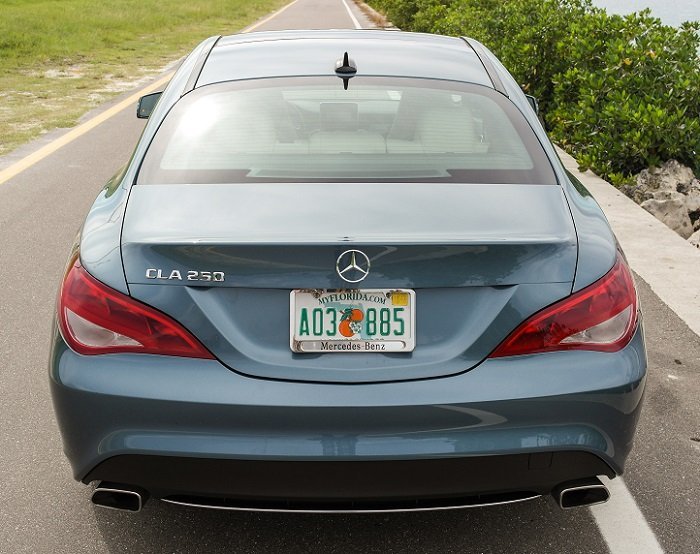