If early sales numbers are any indication, GM’s new line of large SUVs has already proven an absolute slam-dunk success for the manufacturer. Anecdotally, I see them absolutely everywhere, and the data supports this – deliveries in September alone for the entire range (Yukon, Tahoe, Escalade and Suburban) totaled nearly 19,000 units. That’s an almost 50% uptick from the same month last year, and a result not only of American shoppers’ apparently renewed confidence in buying large SUVs, but also the quality of the product being offered. Compared to the Escalade ESV I drove last month, the Suburban pictured here is nearly $25 grand cheaper, but no less impressive. 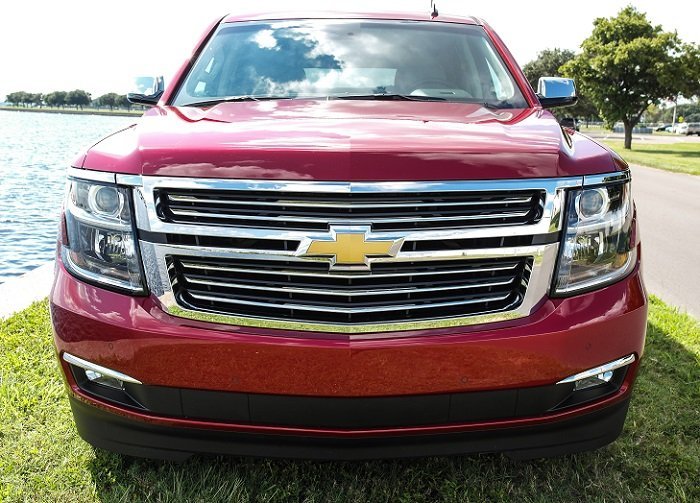 Despite sharing a platform, the Escalade ESV and Suburban couldn’t be further apart in character. About the only traits they share are their cavernous interiors and a distinct ability to feel smaller than they are once on the move. But the Suburban is the friendlier proposition of the two. Where the Escalade shouts about its style, power and authority, the Suburban is understated – its looks don’t draw attention, and when they do, passersby are likely to conclude there’s a family man (or woman) behind the wheel. As preposterous as it sounds, I found the Suburban to be an ideal urban commuter vehicle. Hear me out… 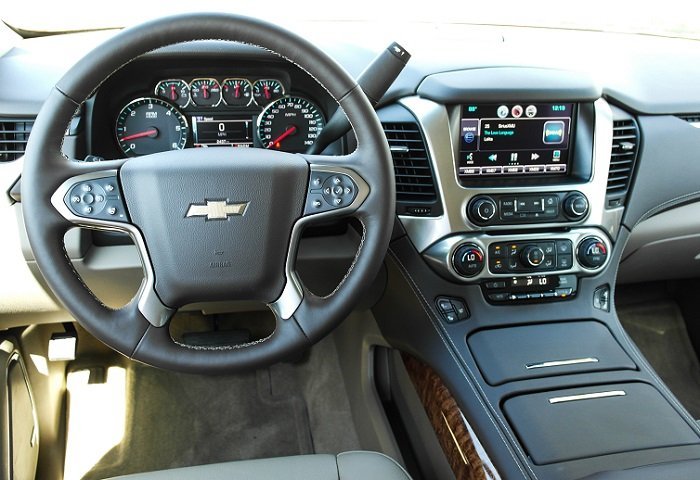 Despite its size, it’s actually quite easy to maneuver. Well-placed parking sensors and cameras make it a doddle to back into and out of spaces, as long as you’re possessed of a modicum of spatial awareness. The ride is serene and remains unfazed by craters or expansion joints, helped in large part by our tester’s 20” wheels rather than optional 22s. It’s also exceedingly quiet, comfortable, and easy to see out of. However, none of this shocked me. Really, the thing I was most surprised by was the efficiency of the thing. Seriously. 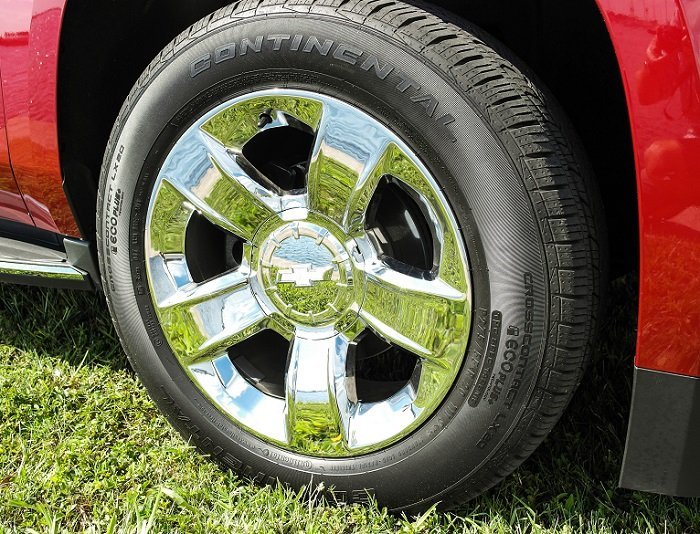 Cylinder deactivation and a steady right foot helped eke out an 18.3 mpg average over my week with the ‘Burb, which was over mixed highway and city conditions. That’s damn impressive for a vehicle of this size, especially when you consider that the more or less identically-sized Escalade ESV only managed 15.5 mpg in the same conditions. Does that make the Escalade’s mileage a deal breaker? Probably not – to most drivers, the difference will equate to less than $100 a month – hardly a worry for the folks shopping these two. 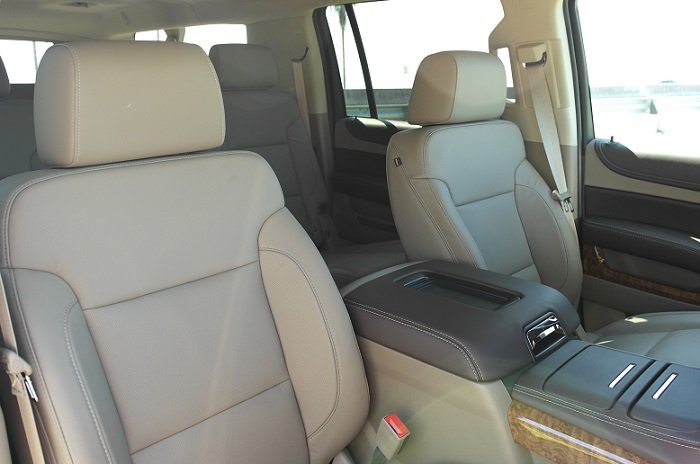 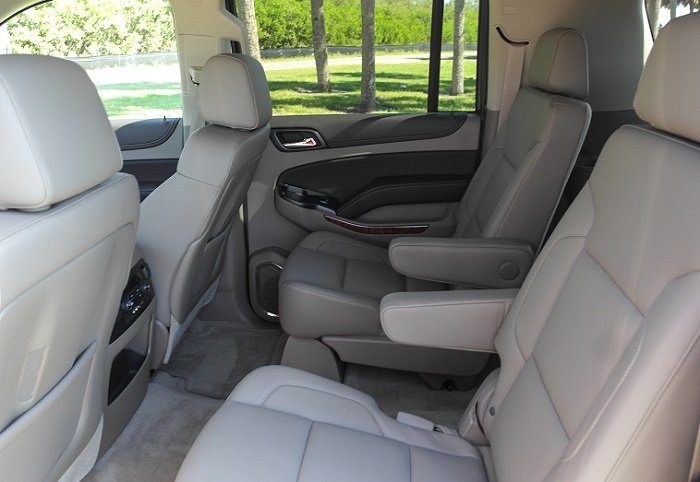 Most of the mileage disparity is down to the Suburban’s smaller engine. The 5.3 V8, seen elsewhere across the “1500” series truck models in GM’s lineup, is 65 horsepower and 77 lb-ft shy of the 6.2 in the Escalade. You’d think that would make the Suburban seem sluggish in comparison, but it doesn’t. In fact, our 2WD LTZ got out of its own way just fine, and has enough grunt to happily pull an 8,000 pound trailer. It hasn’t got quite the same gusto as the Escalade when you trounce on the gas, but in day to day driving, you’re unlikely to notice a difference.

Elsewhere, the 5.3 and 6-speed automatic transmission exhibit the same qualities that endeared me to this combo in the Silverado and Sierra 1500s. The cylinder deactivation feature, which cuts power to half the engine during light load situations, operates seamlessly. The only indication you get that you’re running on four-cylinder power is a green indicator on the dash that flips from “V8” to “V4”. The 6L80 HydraMatic shuffles between gears without hesitation, and never seems to get caught out. Manual changes are handled by a rocker switch on the column-mounted shifter, if you’re so inclined. 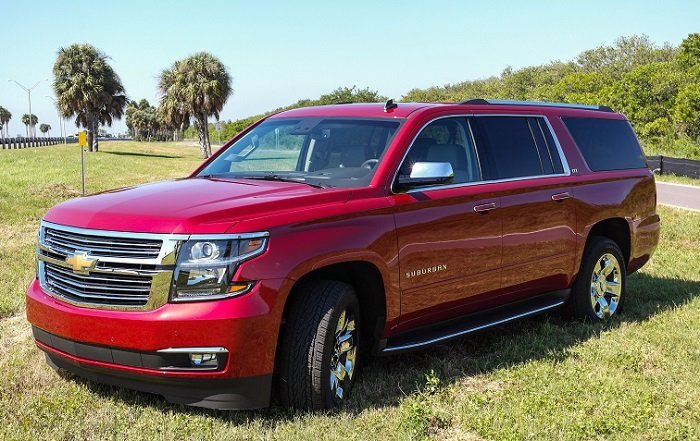 As in the Escalade ESV, interior space is plentiful. Seven adults fit with both ease and comfort – something that cannot be said for most 3-row SUVs, and even some minivans. There are plenty of storage cubbies and thoughtful touches scattered about, including the filing-cabinet center console and 110V AC power outlets, both features lifted from the more workaday 1500 pickups. All the modern electronic safety and convenience options that could be reasonably expected at this price point are fitted here, including heated front and second row seats, cooled front seats, power-folding second and third row seats, two-row MyLink DVD displays, forward collision alert, blind spot monitoring and lane departure warning. While our loaded tester’s $66,395 sticker price certainly isn’t what you would call “cheap”, it does represent a significant value against many smaller import rivals. Now that those rivals can no longer ding the Suburban for truckish driving dynamics and abysmal fuel economy, they’re going to have to work a lot harder to make a case against the great American full-size SUV. 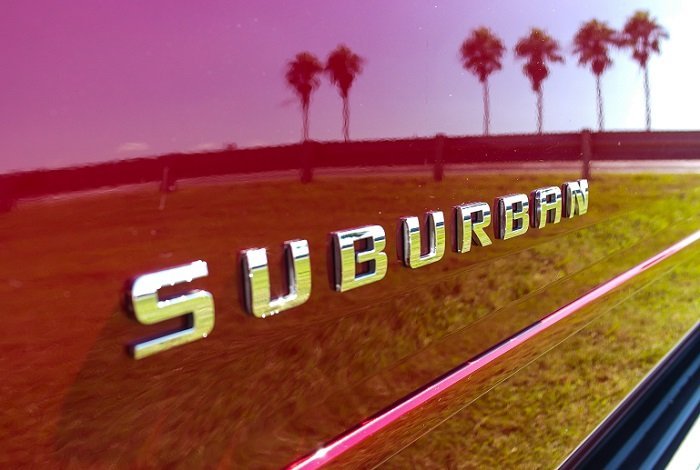