Though my ownership punch card skews heavily in favor of the import, I’m a documented fan of the American car as a species. I owned and loved a 5-liter 2011 Mustang GT. I find the current Corvette to be an absolutely fantastic specimen (though the Camaro leaves me a little cold). And though it’s been only a short while, I can consider myself an honest Mopar fan thanks to the Hellcat – specifically, the Challenger Hellcat I spent some time with over the summer. And now the newest variant to receive the monster 6.2-liter supercharged Hellcat powertrain – the 2015 Charger – looks set to bring my budding domestic love affair to a full boil. 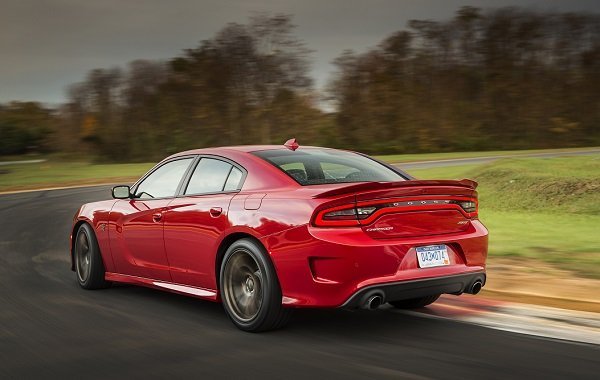 If there’s one thing this car proves, perhaps in defiance of our hipster culture that suggests otherwise, it’s that it is actually possible for something to be both genuine and ironic. Witness the way the supercharged monster under the Charger Hellcat’s hood seems to flout convention – 707 horsepower? Why even attempt such a thing in a post-CAFE world? Dodge’s answer appears to be twofold: “because we could, and because we could do it well”. They’ve created a motor that can bully around an otherwise comfortable and composed 4,575-pound sedan in serious fashion, and then be dialed back down, dropped into 8th gear and left to plod home on the highway achieving mid-20 MPGs. I’m not sure there’s ever been a sedan so dichotomous of character – let alone at this price point, or by an American brand. 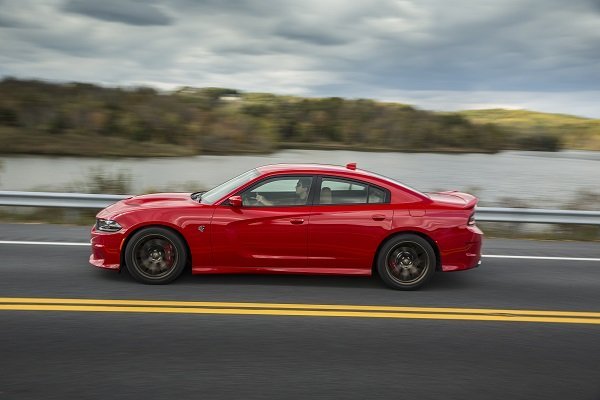 What it adds up to is a pure riot for the driver – especially when the Charger is being flogged around a racetrack, which is precisely what I did during my time with the car. Summit Point Raceway in West Virginia was the venue, a small course with a long straightaway perfect for exploiting the Hellcat’s prodigious power, punctuated by rolling hills and switchbacks. As demonstrated during the Challenger drive event at Portland International Raceway, a closed course is the best, nay, the only place to truly exploit Hellcat’s capabilities. And just like its two door brother, the Charger doesn’t disappoint. The power is mind-bending; it’s hard to imagine ever becoming jaded about its potency. There’s been much said about the competence of the new breed of traditional torque-converter automatics, especially the 8-speeds associated with ZF. I won’t belabor the point, but suffice it to say, the Charger’s sole transmission (aforementioned 8-speed) is equally happy loafing around in Drive or performing full-throttle upshifts firm enough to jostle hairdos. 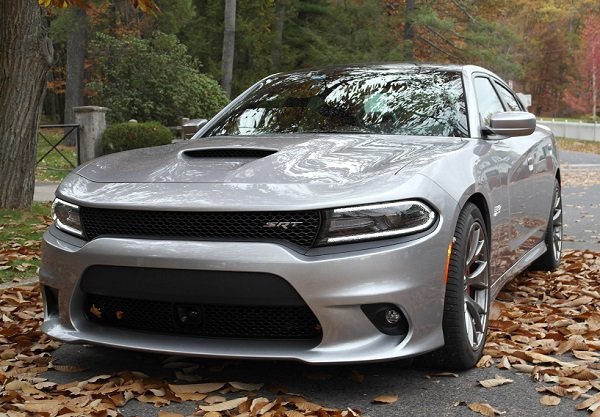 Thing is, the car that stole my heart wasn’t the Hellcat. It was the “tamer” of the two SRT Charger offerings, the 392. That car, with its 485-horsepower naturally-aspirated 6.4-liter HEMI, is certainly no slouch. But its acceleration doesn’t elicit fear in the hearts of men the way the Hellcat’s does…merely those of young children and the elderly. It’s simply “fast” whereas the Charger Hellcat is “stupid fast”. That much is noticeable on the track. But on the street, where we mere mortals play most of the time, the difference is academic – either is capable of adding points to your license in short order. And most of the SRT 392’s low-speed acceleration doesn’t dissipate so quickly into tire dust the way the Hellcat’s does. As a result, it feels nearly as fast – because it’s more usable, more of the time. 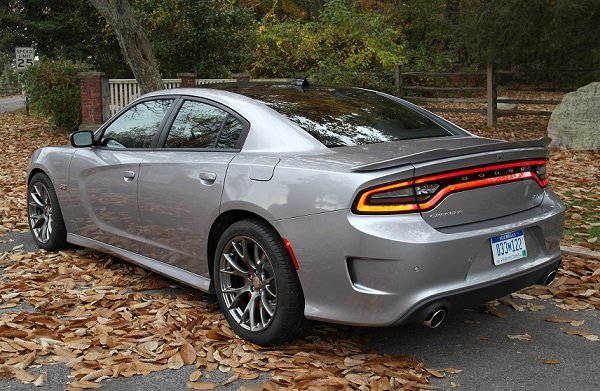 The rest of the SRT 392 package is just as impressive as the Hellcat. It’s got the same massive 15.4” front and 13.8” rear Brembo brakes capable of detaching retinas at full deceleration. Its sole transmission is still a capable, paddle-shifter-equipped 8-speed automatic. It even looks the same as the Hellcat, save for a couple of missing heat extractor vents in the hood and a couple of kitty badges on the fenders. Of course, you don’t have the pleasure of telling people you drive a Hellcat, but I have a feeling that disappointment would fade over time. 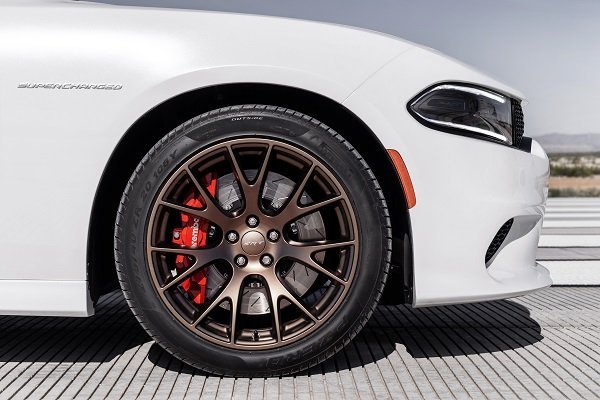 Aside from the addition of the Hellcat and enhanced powertrains across the rest of the range, the 2015 Charger has benefitted from an obvious facelift. That facelift is more than “face”-deep, however; the fascia’s been heavily revised and is more modern than the 2014’s throwback front end. Dodge is quick to point out that every body panel save the windows and roof has been re-sculpted, though the difference is tough to notice. What you might notice are the revised LED headlights and taillights. Minor interior touch-ups lift what was already a rationally laid-out, comfortable, and roomy place to spend time. 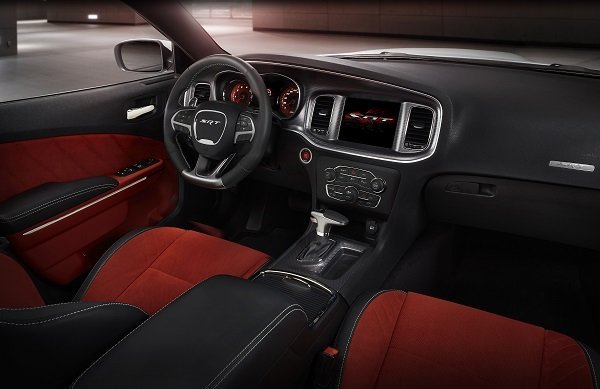 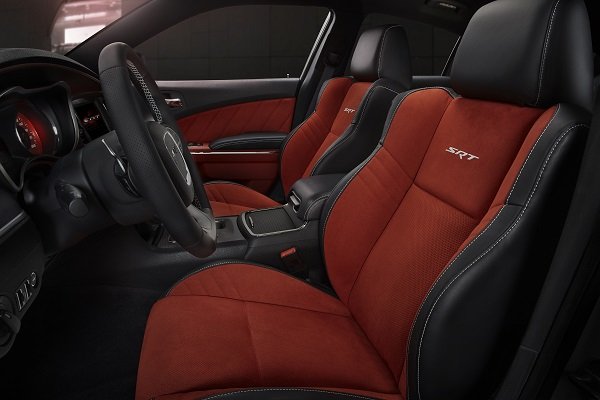 The 2014 Charger didn’t need much in the way of changes. And the 2015 remains essentially what that car was: a modern interpretation of a classic American big-engined sedan. The new revisions bring it in line with what little direct competition the SRT Charger has – namely the Chevy SS – in terms of refinement and available equipment levels. But the SRT 392 and Hellcat models, frankly, bring the Charger into a different league – a pure arms race where bragging rights are measured against the likes of Ferrari and Lamborghini. 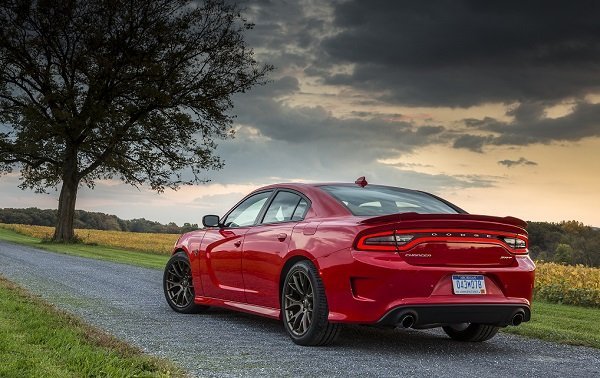 Dodge provided the vehicle for testing purposes and one tank of gas. Photos by the manufacturer and author.