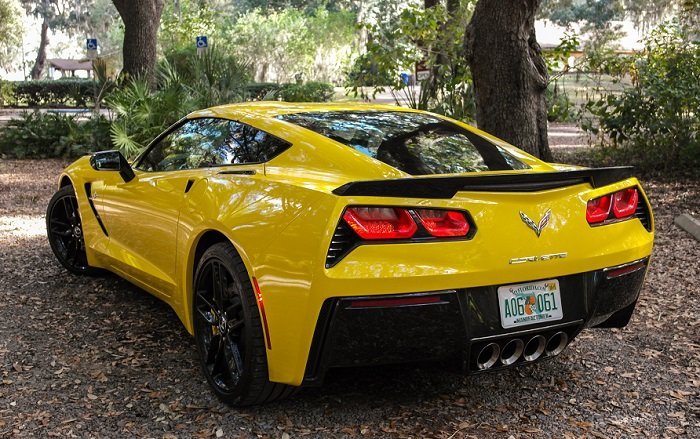 It’s Tuesday, the start of a beautiful fall week in Florida, prime weather to remove the targa top and stow it behind the seats, but I’m too eager to hit the road to spare even the 20 seconds that maneuver takes. The traffic on the way home is “slow and go”, as the local newscasters have taken to calling it, but I can still scarcely contain the excitement the Corvette in Sport mode provokes – even at a brisk walking pace. At idle, the C7’s entire structure shivers with what feel like the reverberations of a lumpy aftermarket cam – but make no mistake, it’s been left there intentionally. GM’s engineers know what separates the unique Corvette experience from other sports cars – the interior’s hand-laid fiberglass “yacht” smell that greets you on warm days is another throwback. In every other way, the Corvette is thoroughly modern. 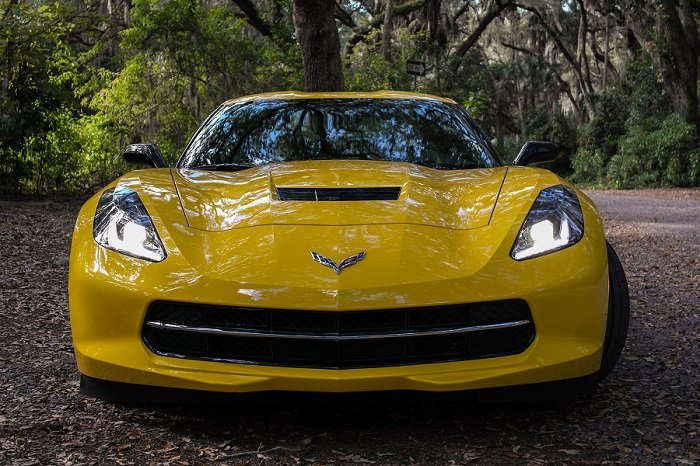 After arriving home, my fiancé bursts through the door minutes later; “oh my god, is THAT the car!?” she asks, motioning outside to the Vette. She’s never this excited for my press cars. Especially American press cars, despite my efforts to convert her. But the sight of a Victory Yellow C7 provokes a biological response. It’s one that will be repeated throughout the week. The Stingray looks exotic. Though I feel some of the comparisons of its shape to Ferrari’s front-engined offerings might be stretching the case just a bit, it is nonetheless a form that would look at home draped atop much more expensive machinery. It certainly looks fetching in brash, bright colors like our tester – all the better to accentuate the black aero bits and daring lines. The site of this car in my parking spot each day never fails to elicit a smile. 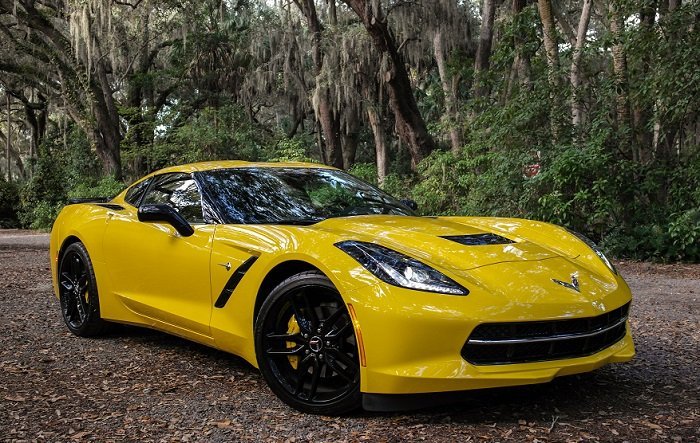 It’s tough to keep a low profile in the Stingray. Every young gun wants to race for forum bragging rights, speed up for a better look, or just ask you about the car and which option boxes were ticked. “Is that the new Z06?” The yellow and black color combination of that new model in press photos is probably prompting the comparison. “That thing got the Z51 package?” Actually, no – it’s just the ZF1 appearance package, which has the Z51’s wheels, sticky tires and rear wing. “Can you take my picture with it?” Of course, miss. Bystanders must fail to appreciate the semi-attainable nature of the Stingray. It rings in at twice the price of the average new car, but the attention it garners suggests the factor is closer to ten times the price. 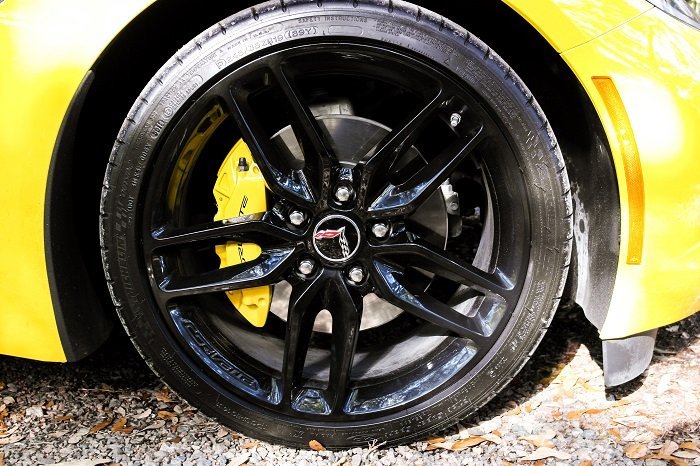 The weekend’s almost here. It’s been a long week made longer by the restraint I’ve been forced to show while commuting in the Corvette. Actually, that’s not fair. The thing is brilliant to commute in. On the standard suspension, bumps are smothered out and road noise is mostly mute aside from a bit of tire roar from the big Pilot Super Sports. It’s a comfortable thing, too, and surprisingly easy to see out of, considering the daring proportions and bodywork. The standard-issue seats are finally a non-issue, being both comfortable over long durations and bolstered enough to keep you in place in corners. More sculpted competition pieces are optional. 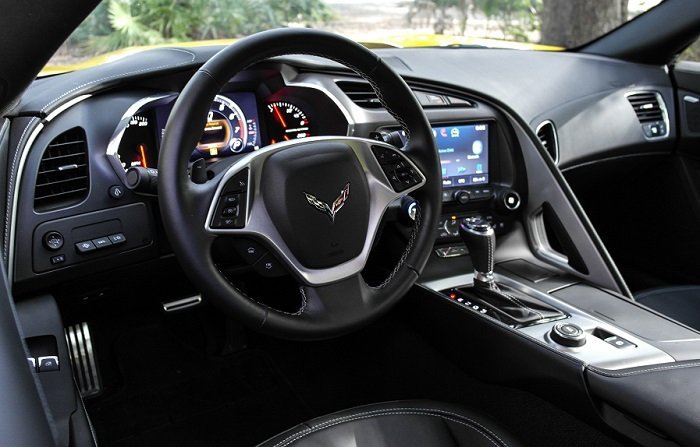 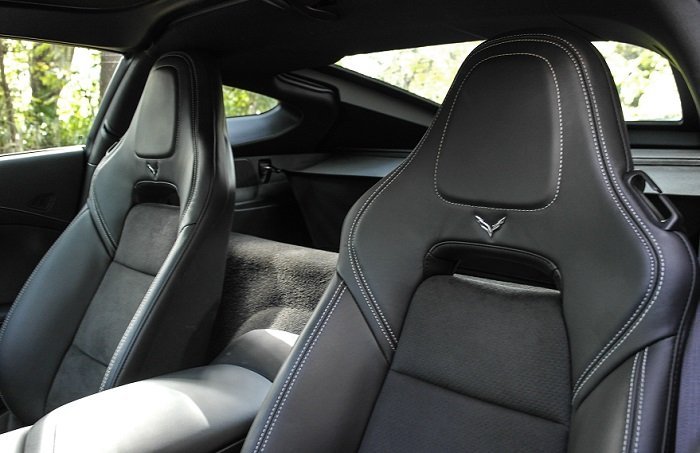 The new eight-speed automatic and five driving modes make the Corvette a true dual character car. Being a traditional torque converter unit, in “drive” the gearbox just goes about its business. You wouldn’t be able to tell the difference between this and a V6 Impala in character – if you never dipped your toe into the throttle, that is. Stick it in “Track” driving mode and full manual shift mode, and it’ll burst through gearshifts quicker than Porsche’s sublime PDK units, without any of the low-speed stumbling some dual clutch units can exhibit. All while emitting a delicious “braappp!” on full-throttle upshifts. 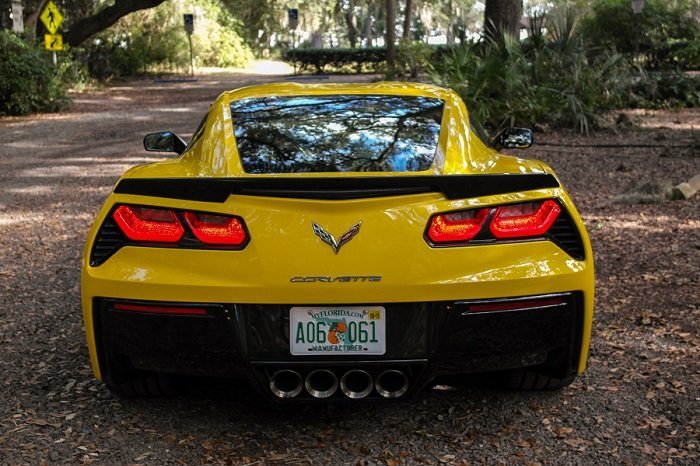 It’s Saturday and sunny, so Track/Manual mode it is. We head, if not for the hills, then at least for the most sparsely populated area of sprawl available within central Florida’s confines. The Corvette makes you feel like a superstar on slithering, open back roads – it flatters the talented as well as the amateur willing to work a bit but it certainly won’t suffer fools. This is still a car light enough and endowed with enough power and torque to neutralize anyone who doesn’t respect it in short order. But it’s not scary – the limits are approachable, crossable. It’s eerily and shockingly fast – how can a car go this fiercely, stop so predictably and corner so adeptly, while also looking and sounding this fantastic at a price starting in the  mid-$50s? It’s sometimes hard to wrap your head around the bargain this car represents, and despite growing weary of articles and reviews espousing the C7’s virtues over and over again, when you spend time with one it’s easy to see that every ounce of praise is justified. 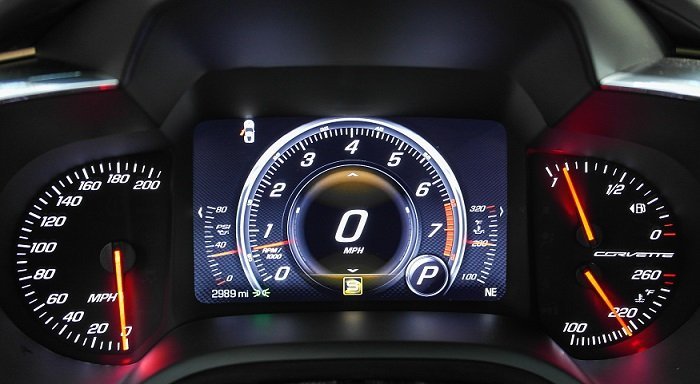 It’s now Tuesday, my last free night with the car. We’ve just come from seeing Jake Gyllenhaal’s character in Nightcrawler play second star to the bright red Challenger SRT being flung all over the screen for much of the film. As we pull out of the garage, I can’t help but think the lithe, yellow Corvette would have been a better vehicle choice for the main character to drive than the pounding, somewhat ponderous Dodge muscle car. It’s unseasonably chilly out tonight, close to freezing; a gentle prod of the throttle catches the rear summer tires slightly off guard and coaxes the Corvette’s tail into a small slip angle while the front end remains pinned straight ahead. I smile – this car would have been much better in the starring role. 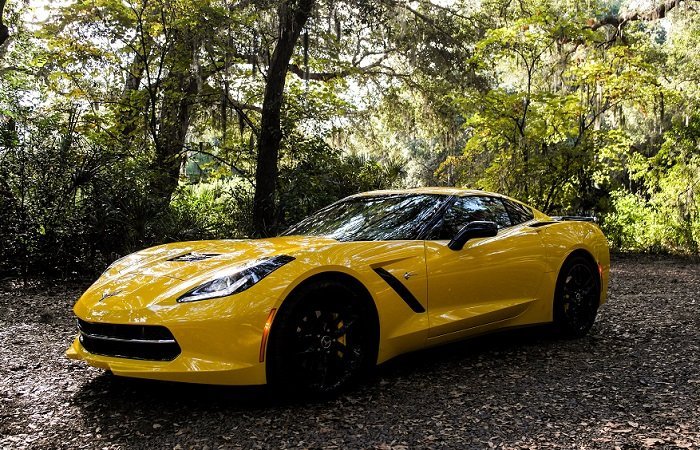 As I write this on Wednesday, I’ve reached the realization that GM is going to want their car back soon. I would be perfectly willing to give it a good home, but alas, it’s not mine to keep. “Car’s going back tomorrow,” I text the better half, “it was fun while it lasted.” “Yeah, I’m gonna miss her” comes the reply. She’s not usually one to anthropomorphize my loaner cars. In this case, it’s completely justified. 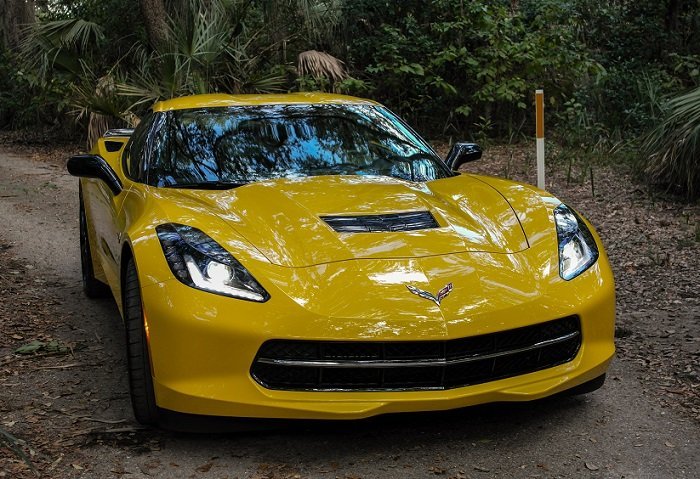