When Audi introduced the gorgeous S5 coupe to these shores in 2007, it was available in a single configuration – with a naturally-aspirated V8 engine powering all four wheels, controlled by a manual transmission. A Tiptronic transmission and other engine options soon followed, but the S5 manual was still the one to covet if you considered yourself an enthusiast. Sadly, Audi’s sexiest front-engine bodywork (in my humble opinion) can no longer be had draped over a V8 and a manual transmission – the S5 moved to supercharged six-cylinder power for 2013, and though there’s still a naturally-aspirated V8 in the lineup in the form of the RS5, no manual transmission is available for it.

Luckily, the RS5 may just be compelling enough to overcome the lack of a third pedal…

Equipped with a version of the potent, direct-injected 4.2-liter FSI V8 shared with the R8 and previous RS4, the RS5 is the crown jewel of the A4/A5 line. And while the rest of the world is treated to this gem of a powerplant in current RS4 sedan and wagon guise, in the US, the RS5 is our only opportunity to sample the naturally-aspirated FSI V8 with more than two seats.

Despite sharing an engine, the RS5 differs from the R8 4.2 in that it is not a pure sports car. That shouldn’t come as a shock to anyone reading this, but it deserves being said. That doesn’t for a second mean it’s missed the mark – after all, a convertible with four real seats and all-wheel drive probably wouldn’t be someone’s first choice to fling around a racetrack anyway. Audi’s focused instead on making the RS5 a dual-character car – something that can play the grand touring role of a laid-back, stylish and fast cruiser capable of crushing the European continent in a single long-haul blow, but overlaying that with switchable powertrain and chassis settings that can be configured as stiff and sharp as the driver dares. Moreover, it’s a BMW M3 for those who think the M3 is just a bit too “been there, done that”. 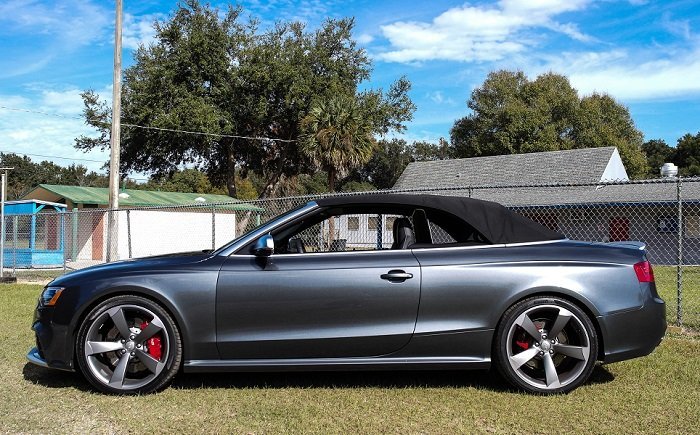 That V8 engine is a beautiful thing when spinning to its 8,450 RPM redline, and it sounds absolutely gorgeous. Seriously, Audi deserves some praise for sticking with the naturally-aspirated V8 in this age of forced induction, because the exhaust and intake notes in the upper portion of the 4.2-liter’s rev range sound fantastic. The seven-speed S Tronic dual clutch is as slick and quick here as it is elsewhere VW/Audi universe, and it goes about its business in the RS with seamless precision.

You’ll have more than just a gorgeous engine to stare at for your $85,000, though – the RS5 absolutely looks the business. In this muted shade of Daytona Grey Metallic, the styling is at once understated and aggressive, wholly symbolic of the great Quattro GMBH bruisers that have come before it, but somehow more lithe and elegant in person than I expected, as if the short, squat stature of the thing doesn’t quite come through in photos. It looks large, maybe even GTR-sized in images, but in person it seems quite a bit more compact than that. The matte-grey-finished alloys set the look off perfectly against the boxy fender flares, and matte aluminum trim serves as the icing on the cake. It’s a great looking thing, which is practically reason enough to justify one over the standard S5.

Inside, the styling details show typical Audi restraint and everything feels designed and built to an exceptionally high standard. The cabin layout is little changed from the A5/S5’s 2008 debut, but it still looks modern. The RS5 comes standard with a 505-watt Bang & Olufsen sound system (optional on lesser models), which has no trouble hitting impressively clear high notes, even while top-down at 80 MPH – though at all speeds I drove, the cabin proved to be a remarkably draft-free and quiet place to sit with the removable plastic wind blocker in place. In fact, at speed it felt calmer than most fixed roof cars do with the windows down – impressive.

The RS5 has all of the chassis and powertrain adjustments a buyer in this class could hope for, but I’m still of the belief that the car would be just fine with a single, “middle of the road”-type setting. There are four settings that allow electronic tweaking in the RS5 Cabrio – engine/transmission, differential, steering, and engine sound. Suspension damping adjustability is also possible on the RS5 Coupe. You can select between generalized auto, comfort or dynamic modes for all settings, or program a “favorite” that combines your preferred modes for each into one click. I found the car to be at its best in “dynamic” mode for the engine and transmission, meaning crisper shift programming and throttle response, and the active exhaust in its naughtiest setting. I left the rest of the settings in “auto” and went on about my business. 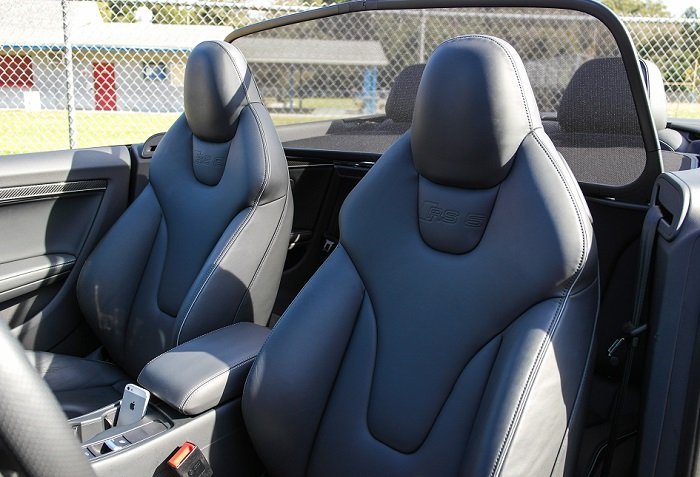 Grip levels are high in steady-state cornering, and the RS5 seems happiest if you man-handle it a bit into corners. It’s got enough grip, thanks to 275-section Pirelli P Zero summer tires at all four corners, to sort out just about anything you throw at it, though eventually the front-biased weight distribution makes itself known with a tendency toward mild understeer at the limit . Although, any rational driver is unlikely to encounter those limits on the street. Strong braking comes courtesy of big 14.4” front and 12.8” rear ventilated discs, with red-painted calipers specced on our tester. Carbon-ceramic front rotors are also optional for those who need the utmost in fade resistance, meaning folks likely to regularly track their cars, or just those who want the bragging rights. 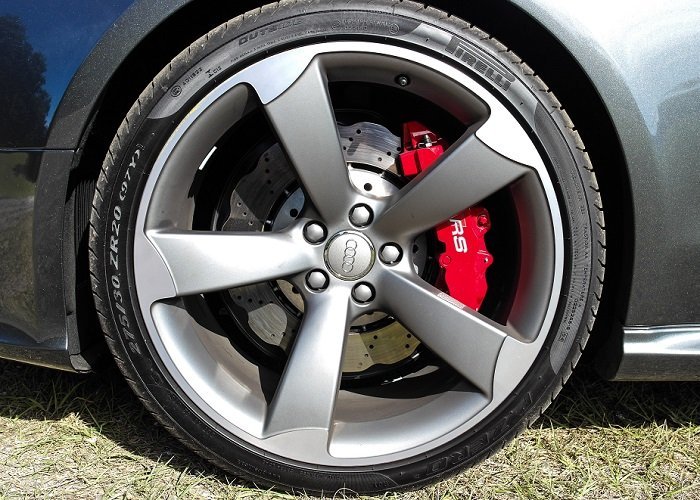 Well, it does weigh 4,420 pounds. That’s heavier than its direct competition, the M4 convertible, by over 300 pounds. This comparison is slightly unfair, given the RS5’s standard all-wheel drive (unavailable on the M4), but then the M4 has a hardtop versus the RS5’s cloth, which should help level the playing field. It’s not as if the Audi’s weight is completely out of the ballpark – after all, it’s now nearly impossible to make a modern high-performance, four-seat convertible that weighs less than two tons. For example – the Camaro ZL1 convertible? 4,374 pounds. The Mercedes-Benz E550 Cabriolet? 4,387 pounds. And BMW’s other 4-series, the all-wheel drive 435i xDrive convertible? 4,270 pounds. None of these cars are featherweights, but the Audi is still the least feathery of them all. 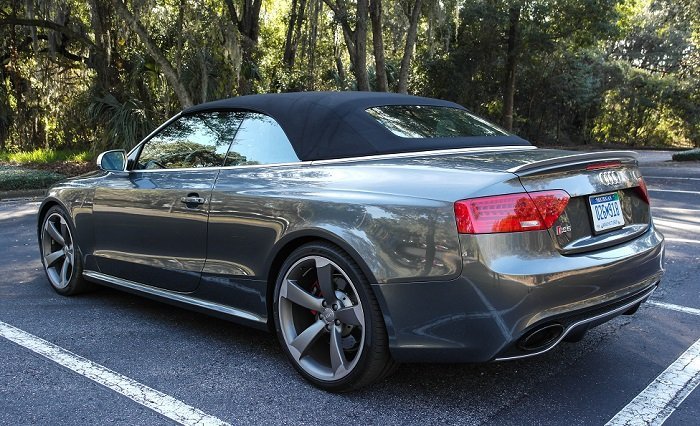 The weight is, in part, made more noticeable thanks to that gorgeous, sweet-spinning V8. You see, the 4.2-liter is a bit light on torque. That statement might sound a bit hollow – I mean, it’s got 316 lb-ft of the stuff, after all. That’s more than double what my feeble FR-S manages to put down. How can one possibly accuse it of not being torquey? Well, the issue is that the torque lives all the way up the rev range; unless you’re on cam above 4,000 RPM, the V8 just doesn’t feel all that gutsy. Above 7k, it sings. It’s easy to want it both ways, of course – if you crave high revs and bags of character, turbocharging usually isn’t the way to go. And yet there’s something about the RS5’s laid-back demeanor that’s just begging for a pair of snails to be added to the V8. Don’t be surprised if the next generation (assuming there is one) gets forced induction. For now, you’ll have to live with the echoes-of-LeMans exhaust note and high strung nature of the V8. It’s a tough world.

The RS5 is an impressive car in many ways, and manages to be both deeply lovable and deeply desirable. That’s not to say it’s without its flaws, and certainly, anyone looking for a German GT-R at a slight discount will probably come away disappointed – though, especially in Cabriolet form, comparisons between the two are apples to oranges.

Perhaps it’s these flaws that make it so desirable – it’s perplexingly hard to drive and behold the RS5 without forgiving it completely and wanting a place for it in your own stable. But it’s also devilishly close to being one of the all-time great GTs – something a little more torque, a little less weight, and a touch more handling focus would surely solve. 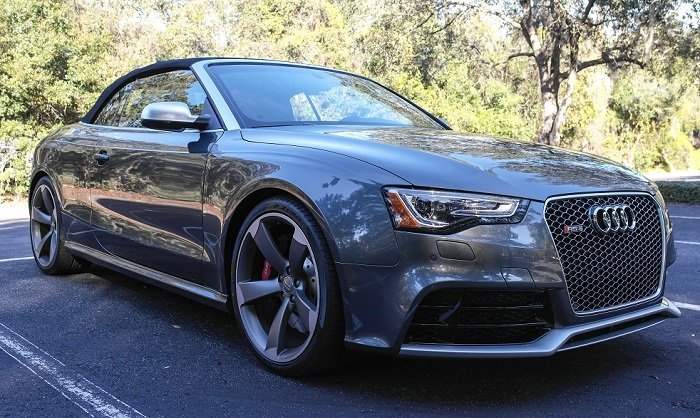 Audi provided the vehicle for testing purposes and one tank of gas. Photos by the author.