When I drove the Buick Encore in 2013, it was a bit of a unique offering on American soil, owing to its subcompact roots; specifically, those of the Chevy Sonic. Besides the Mini Countryman and Nissan Juke, even up until last year there were few alternatives for those seeking a pipsqueak crossover. The B-segment crossover field is set to grow significantly in 2015, however, with manufacturers like Honda, Mazda, Jeep and Fiat each set to introduce their own variation on the theme. Chevy can also be counted among the fray, although much of their work on the Trax seen here had already been done with the Encore. 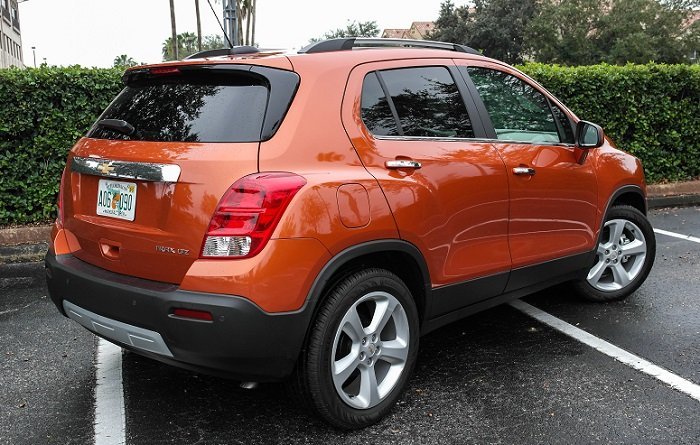 Besides being Chevy’s new entry into the rapidly expanding small crossover field, it’s also a sister car to the Encore. That’s not to say it’s a rebadge job, exactly – the exteriors and interiors of each are unique. But they ride atop the same Sonic-based platform, and beneath their hoods lies the same beating heart – a 1.4-liter EcoTec turbocharged four-cylinder, mated to a six-speed automatic and either front- or all-wheel drive. Power and torque stand at 138 hp and 148 lb-ft, respectively. 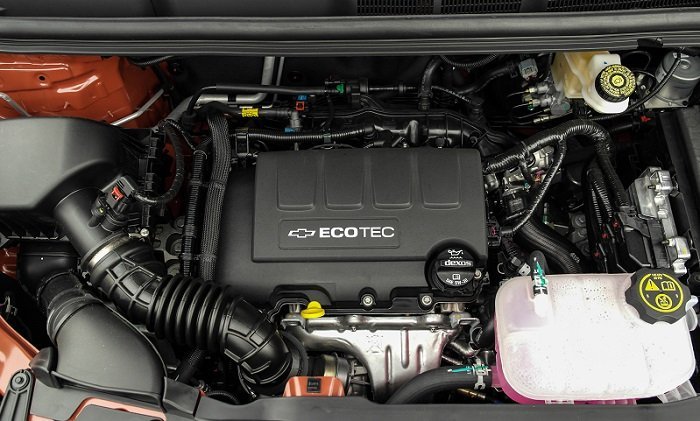 At some level, the reason shoppers are eager to plunk down money for a subcompact crossover over a similarly-sized sedan or hatchback comes down to vanity. The virtues these vehicles tout – compact footprint, easy parking lot maneuverability, practicality galore, good fuel economy and decent value for money – are all virtues possessed by the car-shaped subcompacts they’re based on, only more so. So we can assume that the reason these crossovers are quickly becoming the hot-ticket showroom item is because to buyers, they just look cooler than their sedan and hatch counterparts. 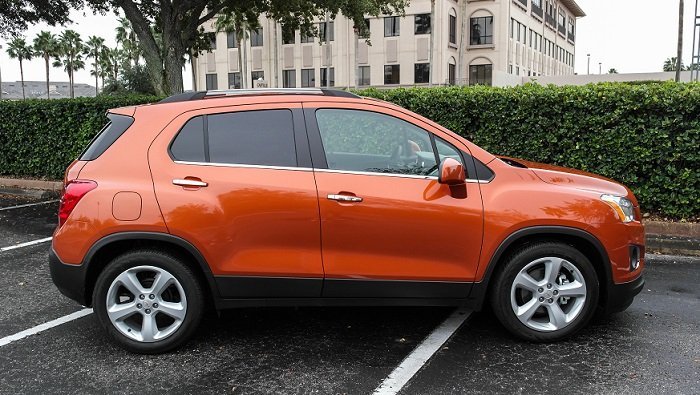 The Trax fares pretty well in this regard, being both fairly well-proportioned and possessed of some interesting styling details. Only in the side profile does a pronounced front-biased look present itself. Elsewhere, and especially in our tester’s bright orange paintwork, I can see potential customers calling the look “cute”, “quirky”, and “funky”.

In all of the other aforementioned categories, the Trax also ticks the right boxes. It’s a breeze to wheel into tight spaces, there’s stretch-out room up front and decent space in the rear, allows umpteen configurations of seat folding positions (aided by a fold-flat front passenger seat), has seemingly hundreds of hidey-holes and storage bins scattered around, gets close to 30 miles per gallon in the real world and starts at just $21 grand, only cresting $25,000 when fully loaded (add $1,500 or so for all-wheel drive). 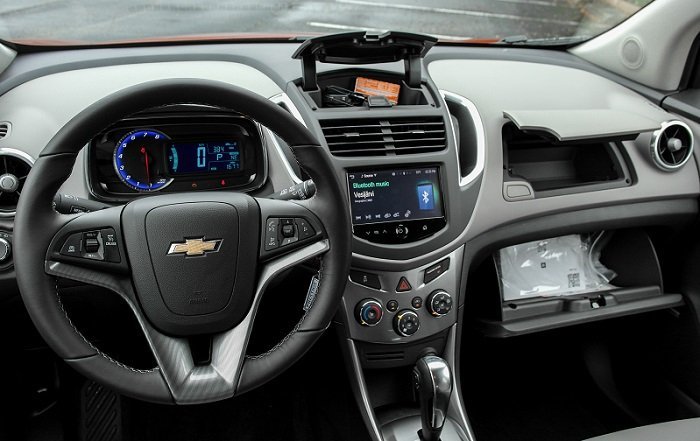 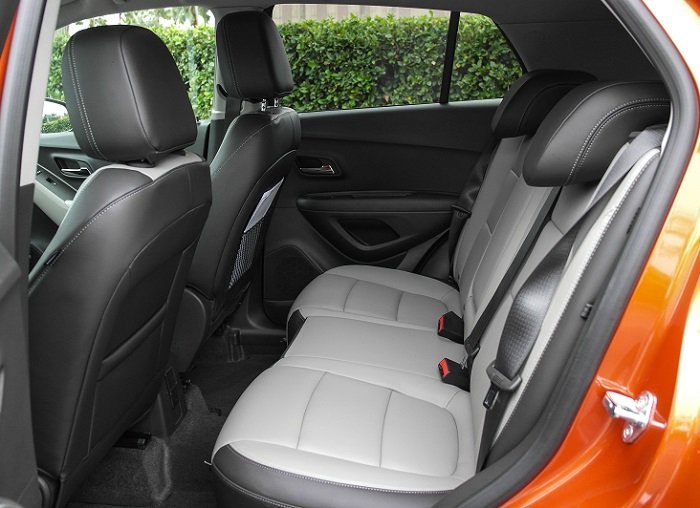 Dynamically, it also corners adroitly for such a tall, top-heavy type of vehicle, and the 1.4-liter turbo four with its 148 lb-ft of torque (which actually doesn’t sound like enough on paper) mostly just…works. It’s definitely not going to dust off any Camaros at the lights, but during highway passing maneuvers – typically a weak point among subcompacts – the broad torque plateau allows for just a single-gear downshift. Press gas, single gear drop, away you go (within reason, of course)…leagues better than the wheezy zing to redline you’ll get in most of the naturally-aspirated and/or CVT-equipped competition. 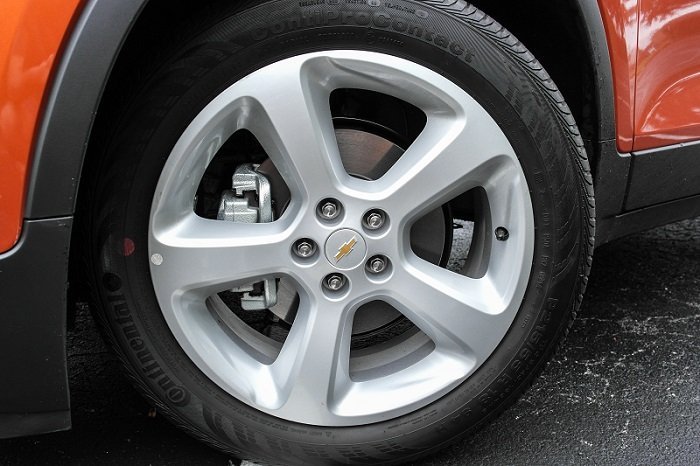 While that turbo four has enough poke to keep you out of trouble in most situations, it announces its presence loudly inside the cabin whenever the requested throttle opening exceeds 50%. I hadn’t noticed that trait in the Encore, so perhaps some sound deadening was left out in Chevy’s version.

Another area the Trax kowtows to the Encore is in terms of interior design and materials. While the Trax, in the LTZ trim of our tester, has enough creature comforts to satisfy at the price (a simple touchscreen audio interface, heated leather seats, power driver’s seat, steering wheel audio controls, backup camera, and a Bose stereo) it surrenders the nicer interior design and more upscale materials of the Encore to offer a lower sticker price. A similarly equipped Encore FWD runs about $3,500 more than our uplevel Trax LTZ tester – buyers will need to decide if that price is worth it to them over the mechanically identical Chevy. 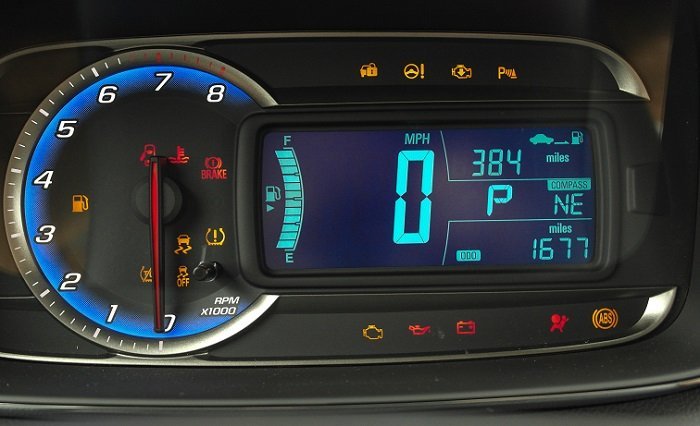 Though not as early to the party as the Encore, Chevy’s entrant to the subcompact crossover market still beats the rest of the herd to showrooms, and is worth a look – especially for buyers with a fixed budget of $25k or less. If your wallet can stretch a little wider, though, we think the more upscale looks inside and out of the Trax’s Buick sister make a strong case for cross-shopping within GM’s own portfolio.