Though the recently announced, more sporting V  iteration of the compact Cadillac ATS has stolen most of the headlines recently, we’ve been eager to get our hands on the standard version of the littlest Caddy for some time now – especially in svelte coupe form pictured here. 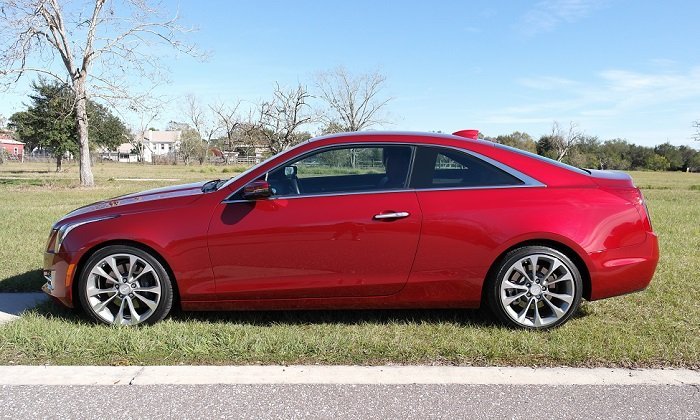 In a nutshell, it’s the two-door version of the compact ATS sedan that was introduced for 2013 to fend off the likes of the BMW 3-series, Audi A4, Lexus IS and Infiniti Q50. Picking up where the sedan leaves off (with the same lauded handling and even tidier styling), the coupe is available with only the best two current ATS powerplants, the naturally-aspirated 3.6-liter V6 and the turbocharged 2-liter four-cylinder seen here. If those aren’t enough, the ATS-V coupe and sedan will crank up the amperage even further when they arrive later this year, equipped as they are with a storming twin-turbocharged V6 with 450 horsepower and either manual or automatic transmission options. For now, only the four-cylinder is available with a row-your-own gearbox. 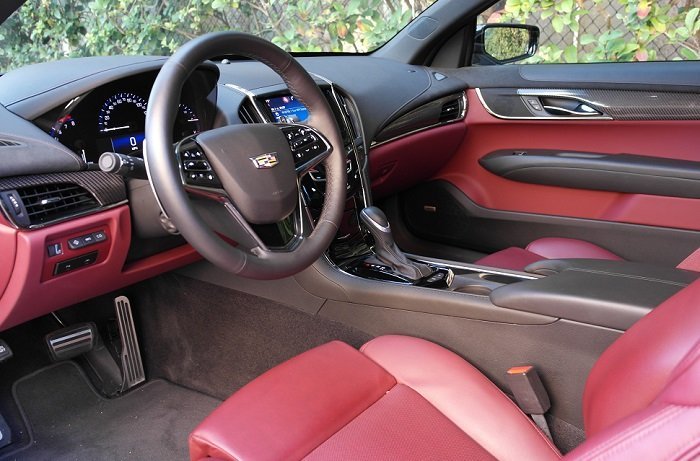 Let’s start with the styling, a major contributing factor as to why you’d pick this coupe over the sedan in the first place. It’s a good-looking car in photos, but its angularity and proportions are particularly appealing in person. Our tester’s deep “Red Obsession” metallic paint was also quite fetching, though subject to some orange peel. The interior, a matching shade of scarlet called Morello Red, was finely finished and nicely styled. Leather, suede and carbon fiber swathes cover most of the dash and door panels, while the CUE touch-screen and piano black trim make up the waterfall center stack. The gauge cluster design has divided opinion among online forum-jockey types, but I found it to be easily legible. 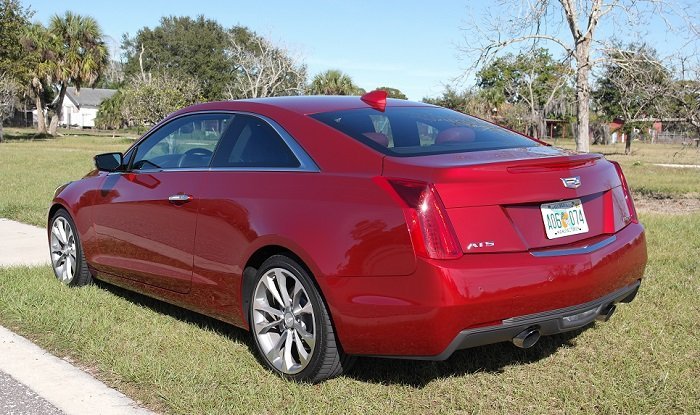 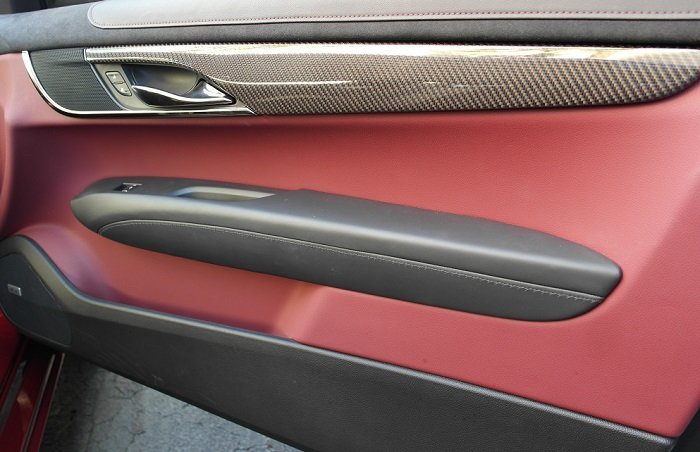 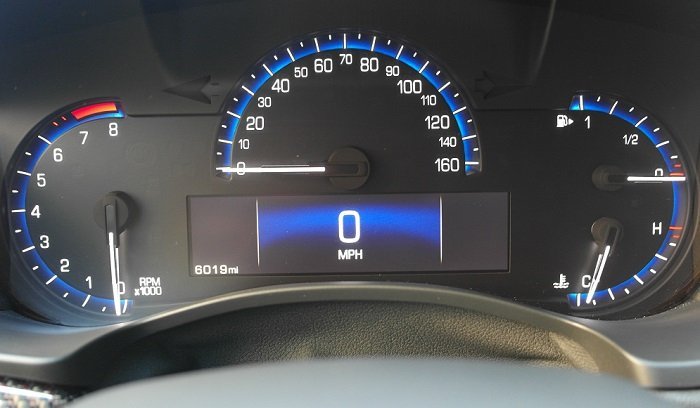 Something you don’t notice about the ATS (in pictures at least) is how compact it is, but it’s immediately evident upon hopping into the driver’s seat – your passenger sits closer to you than in most modern cars. But I love the intimate feel that this narrowness imparts, aided equally by the short dashboard and thin a-pillars. This compact nature also pays dividends in handling – most rags have spoken quite positively about this platform’s handling, even in comparison to the class-stalwart 3-series, and rightly so. This thing handles. It turns into corners enthusiastically and remains planted, even with the adjustable Magnaride shocks in their softer “Touring” mode, settling into a neutral attitude that falls just on the right side of playful. A relatively low curb weight of 3,418 pounds and near-50/50 weight distribution help in this regard. 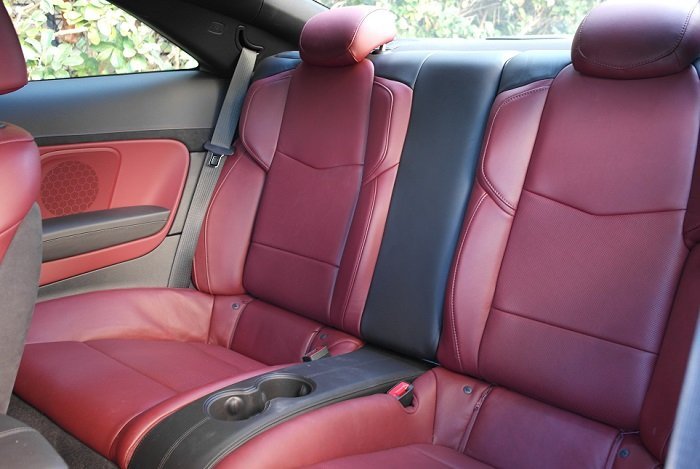 Our tester featured the ATS’s coupe’s standard powertrain, which is a 2.0-liter turbocharged four-cylinder and 6-speed automatic powertrain. A 6-speed Tremec manual ‘box is also available with the four-cylinder and will be the purist’s choice, while the range-topping 3.6-liter V6 is available only with the automatic. Shifts from the 6L45 automatic are smooth in full auto mode and crisp enough when controlled through the standard-issue wheel-mounted paddles, though our choice would still be the manual (shocking, right?). It’s not difficult to imagine that GM’s new 8-speed automatic, which we’ve already sampled in Corvette and Escalade applications, will make its way to the ATS eventually, too – but for the time being, the 6-speed is a fine gearbox and well-suited to the 2-liter’s torquey character. 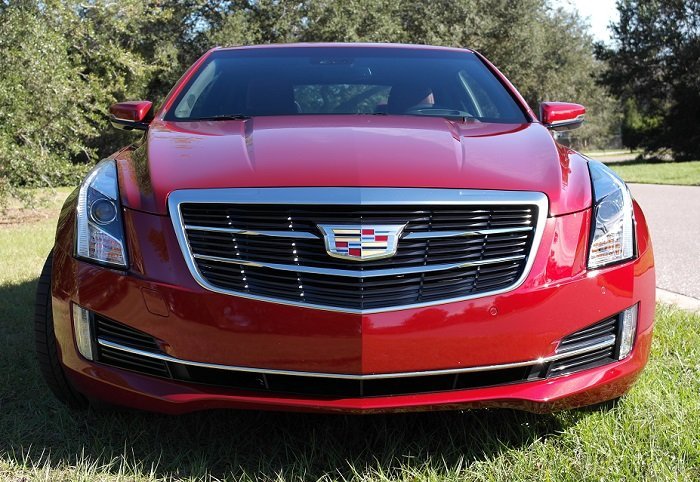 The four-banger is boosted to the tune of 18 PSI and 272 horsepower, giving it the highest specific output of anything in its class, at 136 hp/liter. In spite of this, the 2-liter rarely feels laggy or caught with its pants down, thanks to a swell of torque (295 lb-ft) available between 3000 and 4600 RPM. Those numbers help it get to 60 miles per hour in around five and a half seconds, though honestly it feels so serene, you could be forgiven for thinking it was slower than that. All it takes is a quick glance at the heads-up display to reveal you’ve crested 80 MPH far earlier than intended. While fairly fleet of foot, it’s still possible to squeeze decent fuel mileage out of the four, even if you’re caning it – we saw an average of 24.8 MPG during our week of driving, squarely between the EPA estimates of 21 city and 31 highway.

To be honest, I had to work hard to come up with things I didn’t like about the ATS. It’s an eminently likable compact luxury car. But I suppose if forced, I might opine that the Magnetic Ride Control dampers, which work so well in “Touring”, have been programmed to act much the same in “Sport” as they do in other cars, which is to worsen the ride quality without much of a payoff in handling. I set them in “Touring” for the duration of my time with the car and was rewarded for it over every pothole. Cornering prowess seemed little worse for wear. 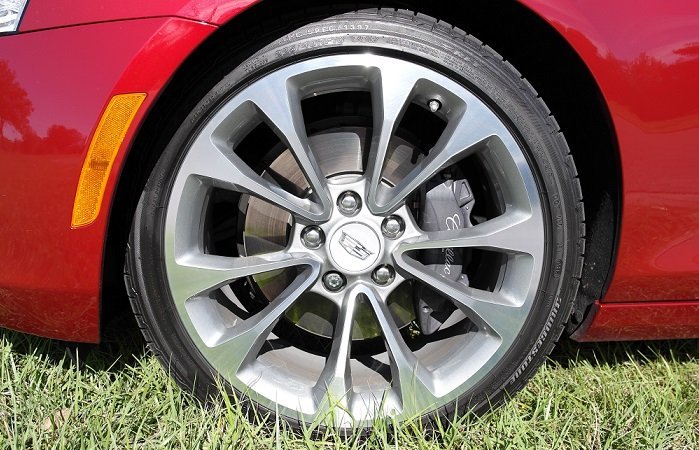 The ATS has already been widely lauded as the best handler in the class, which is a valiant result considering this is Cadillac’s first crack at the segment for quite some time. I found it to be a bit more than just a great chassis, though – in coupe form, it’s legitimately desirable as an object. It’s pretty, lithe, well-designed and made from quality-feeling materials inside and out. I’d solidly recommend one to someone shopping the compact luxury coupe (or sedan) market. 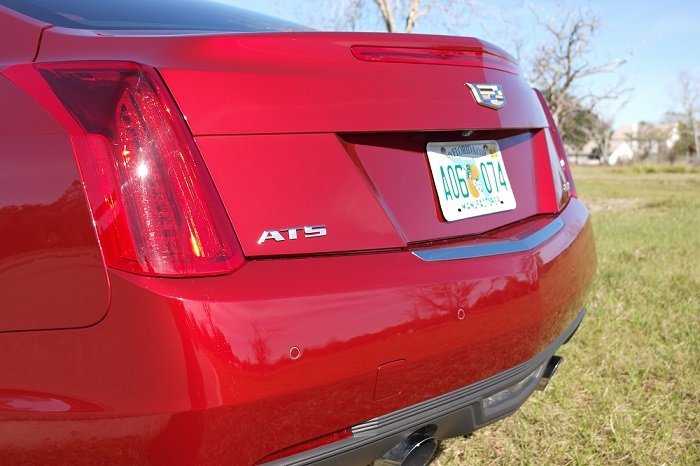