Like the Challenger I drove a few weeks back, sales of the four-door Charger are primarily comprised of V6 and R/T V8 models, rather than the fire-breathing SRT models that typically grace the pages of buff books. Furthermore, for the middle class family man who needs a practical sedan, but doesn’t want to succumb to the boredom of a CamCordTima or the predictability of the rear-wheel drive compact luxury class, a big American brute like the Charger R/T provides a compelling alternative. What are the highlights and pitfalls of making such a choice? Read on to find out.

Along with the Challenger, the Charger was heavily updated for the 2015 model year. The most obvious change is the modernized front end sheetmetal; although Dodge changed every panel south of the roof and windows, certainly the biggest difference is the new front clip. Inside, the overall dash design remains the same, but the gauge cluster dials and center screen have been modernized, a new steering wheel takes the place of the dated old version, and an electronic T-handle shifter supplants the previous gated unit. 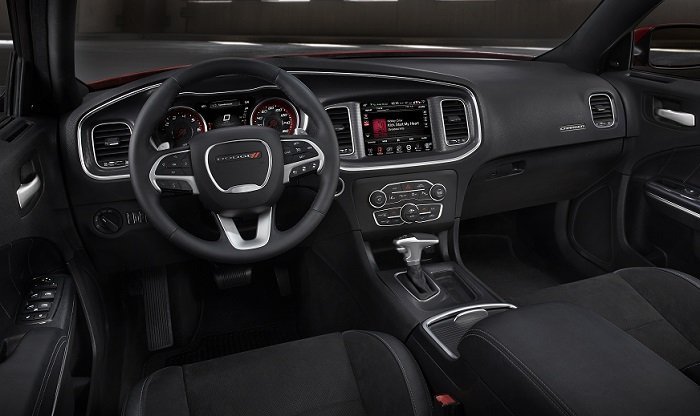 Mechanically, things are less changed – at least on this R/T model – although it does gain electric power steering with driver-selectable modes, new suspension tuning, and an eight-speed ZF automatic transmission, which greatly improves fuel economy and refinement. Under the hood is the same 370-horse, 395 lb-ft 5.7-liter pushrod V8 from last year.

Although unchanged, the HEMI V8 feels refreshed thanks to the new 8-speed automatic, and makes its presence known early and often; the mellifluous induction note is not a sound to be reckoned with. Even though it’s a thirsty beast, a generous spread of gear ratios (including two overdrives) and cylinder deactivation mean you can wail on it and still return decent fuel economy numbers. We saw close to 20 mpg during our week of spirited driving – just a few ticks shy of the V6 Challenger’s – so if you’re trying to use the annual fuel bill as an excuse for not springing for the HEMI, your argument just got a bit weaker. 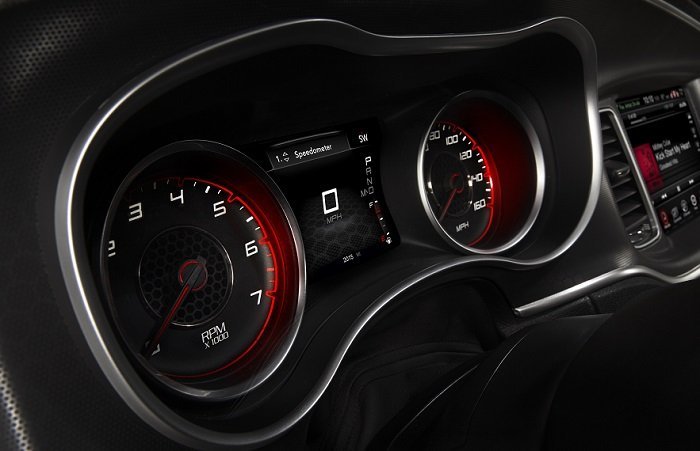 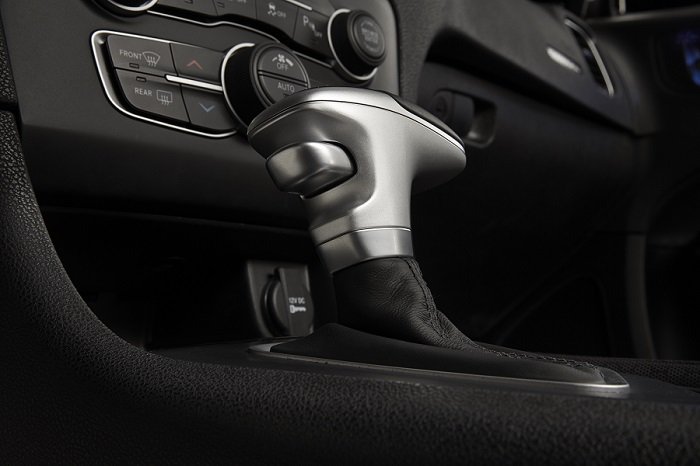 Dodge estimates that with the new gearbox, 0-60 times for the R/T have now dropped into the high-five second range, and it certainly feels that strong from behind the wheel. To make full use of the TorqueFlite’s responsiveness, you’ll want to spring for the $3,000 Road & Track package, which brings wheel-mounted shift paddles and a shorter final drive ratio for the limited-slip diff (3.07 versus 2.62). You’ll also get “Super Track Pak” suspension tuning (not to be confused with the stand-alone, 6.4-liter “Scat Pack” version) and performance steering calibration. 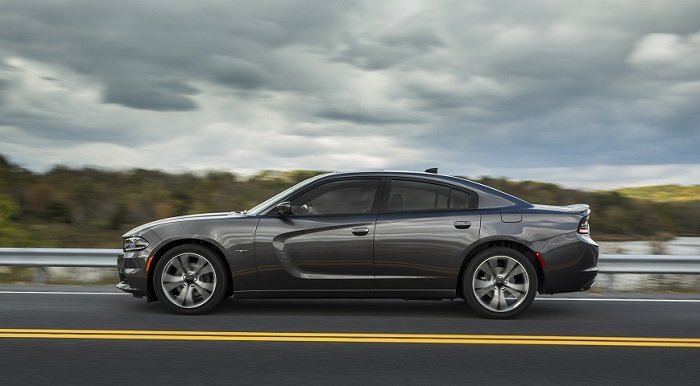 Generous equipment levels help make an even stronger case for ticking the Road & Track option box, as the package also includes 20” wheels, HID headlights, power/heated/cooled Alcantara front seats, power-adjustable pedals and steering column, and park assist. Our tester was further decked out with a $995 Beats sound system, $2,590 in combined safety tech and convenience options, among which were adaptive cruise, blind spot monitoring, forward collision prevention and so on, navigation ($795), a power sunroof ($1,195) and a gloss black-painted roof, which at $1,500, seems like an ask too far. If you could live without the black paint and sunroof, a still nicely-loaded HEMI will run just a tad north of $40k, which looks like a screaming bargain considering the amount of car you get in return. 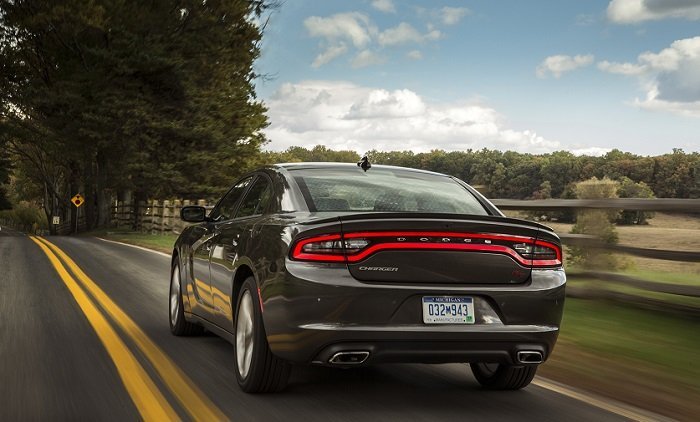 There’s very little not  to like about the R/T; even some of the foibles that could be considered irksome on the higher-priced SRT Charger variants (blah interior trim in places, and generally acting a bit rough around the edges) can be forgiven at this R/T’s more reasonable price level. 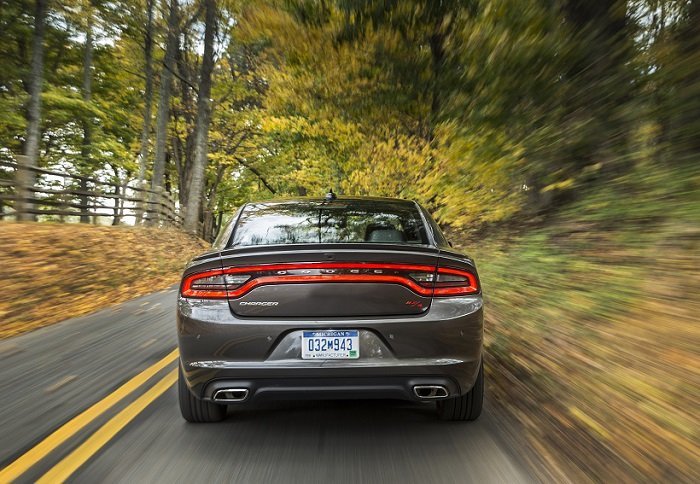 If you’re looking for a glassy smooth ride, I suppose the R/T without the Road & Track option might be a better bet; it didn’t bother me much on the smooth roads of the Southeast where I reside, but I can see pock-marked northern roads causing a bit of head-toss on the firmer Super Track Pak suspension. 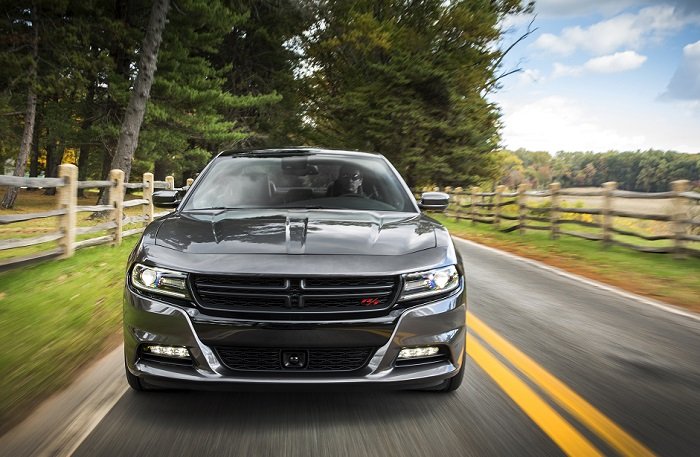 Finally, while there’s a good amount of room inside, it doesn’t feel quite as roomy as the Charger’s prodigious exterior dimensions would suggest. Blame the necessary evils of rear-wheel drive packaging. Of course, if you want a more space-efficient sedan, you’re going to end up shopping the front-wheel drive category, and we certainly wouldn’t want to steer you in that  direction.

We love what the Charger represents. In a way, the technology and safety updates from this latest 2015 redesign bring the car right up to date with what else is out there in the large sedan segment. But the way which the Charger, particularly in V8 guise, carries itself is decidedly vintage in nature. Dynamically, it’s got enough character and capability to go toe-to-toe with the pony coupes of the world, but it still offers five real seats and a massive trunk to make use of when called for. It’s a true “dual character” that few sedans can pull off, and fewer still at this price point – and that includes the Charger’s chief rival, the Chevy SS.

Dodge provided the vehicle for testing purposes and one tank of gas. Photos by the manufacturer.