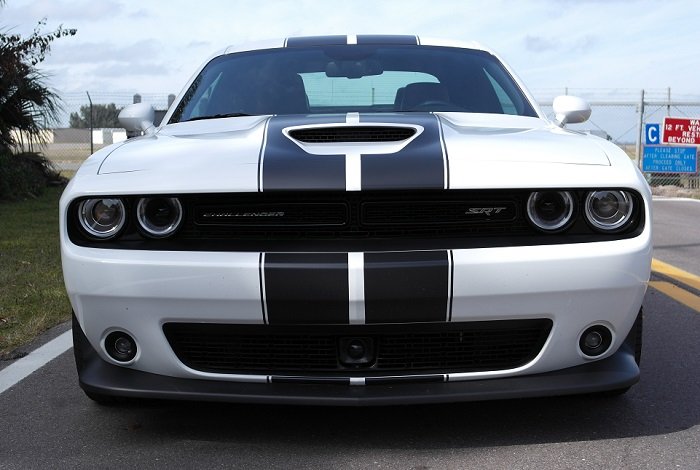 This is a car that needs little introduction, especially since we’ve featured the Challenger in its various iterations regularly on this site, as mentioned above. See here, here and here (and also here) for evidence of this. But if you’ve been in the dark for the last few years, then the Challenger represents the Dodge brand’s submission to the competitive American pony-slash-muscle car field. Whatever you call them, the Camaro, Mustang and Challenger are birds of a feather. They’re based around the same principle (big-engined, rear-wheel drive fun with a high value quotient) even if each of them is executed slightly differently. Among the three, the Challenger is probably the easiest to live with on a day-to-day basis. It’s got the most feature content for the money and it’s easily the roomiest for occupants and luggage alike. 2015 saw a major update that finally brought the interior design and available technology onto the same playing field as the V8 engines and exterior styling. 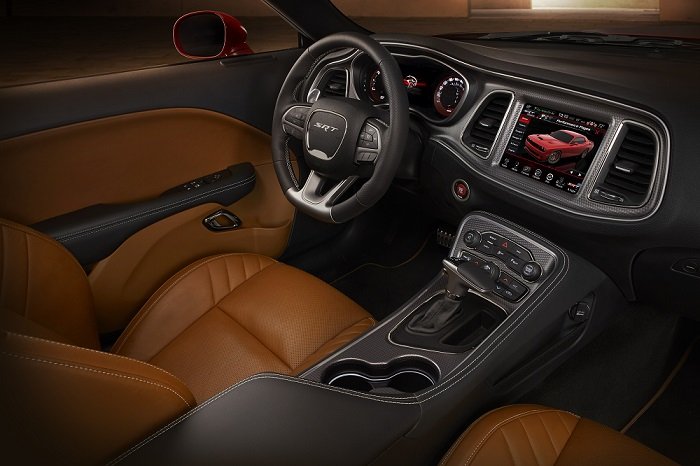 If the V6 SXT we drove a few weeks back was a reassuring but subtle indication of the greatness that Dodge’s 2015 updates brought to the Challenger, then this ballsy SRT 392 model is a loud reminder. Very loud. Stomp on the throttle in any of the 8 available forward gears and you’re treated to an aurally titillating combination of induction howl and exhaust growl that few layouts other than a large-displacement pushrod V8 can offer. It sounds fantastic at part or full throttle, and though the noise dulls but never really vanishes at a highway cruise, it manages not to become taxing. 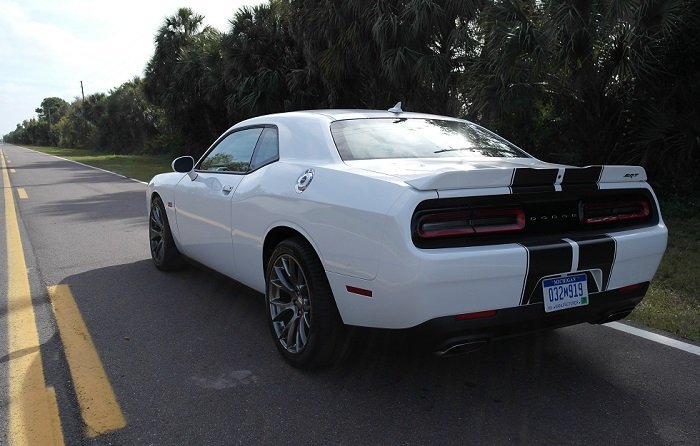 Then there’s the thrust of the thing. Various magazine-collected test numbers show the automatic 392s (in either SRT guise as our tester, or the value-focused R/T Scat Pack model) will run the quarter in the mid-12s, but to be honest, it feels faster than that. It’s likely a combination of the low-end torque, the noise, and the gearing – 8-speeds that are executed with whip-crack speed enable dizzying bursts of acceleration – that makes it feel like an 11-something second car. Indeed, even against its 222-horsepower-stronger Hellcat big brother, which I’ve had admittedly less street time in, the SRT 392 automatic feels fairly matched. Perhaps it’s because even though the Hellcat carries a stronger power rating, it’s equipped with the same 275-width Pirelli P-Zeros at all four corners, which try as they might, struggle to cope with the SRT’s plump torque curve. 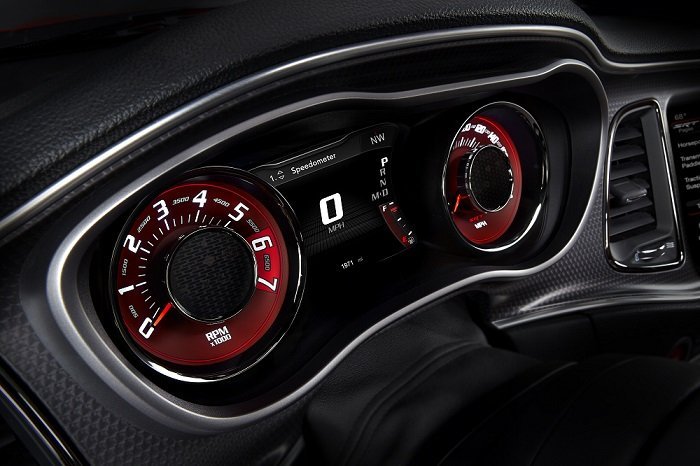 So, it’s fast, it sounds great, it looks great – it pulls more stares and admiring grins than any Porsche at triple the price is likely to – how does it turn and stop? All the power in the world is useless if you can’t control it, and fun as it is, the Hellcat starts to run into “too powerful for its own good” territory. If you’re buying a Hellcat, that’s what you’re signing up for – silly, gratuitous power is its raison d’etre. What about the only-slightly-saner 392? In any iteration, the Challenger is a big car. It’s two tons, it’s got five seatbelts and will haul two dead bodies in the trunk without batting an eye. There’s no getting around the facts, although the SRT engineers have done an admirable job of trying to fight physics. Turn into a corner, and the hefty, variable-weight electric steering actually gives you a semblance of feel for what the front tires are doing. It shows that engineers are making progress with these once almost universally numb racks. Cornering attitudes remain fairly flat and neutral up until the point the aforementioned Pirellis relinquish grip, finally dissolving into mild understeer that will easily become oversteer if your right foot so deems it. The SRT is happiest on long straightaways and fast sweepers; anyone tackling tight switchbacks or coned-off autocross courses will be quickly exposed to the size and weight of this chassis, though few are likely to buy the car for these purposes. 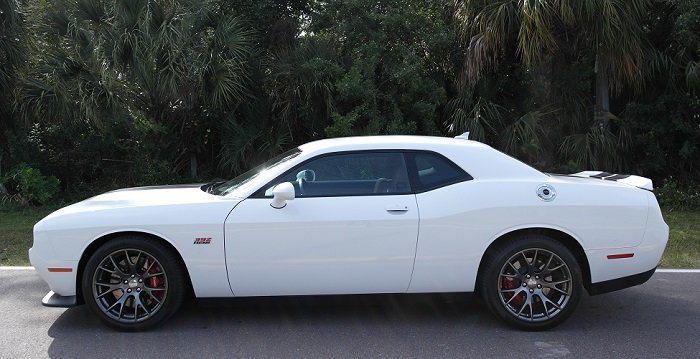 The SRT’s brakes are pretty out-of-this-world; massive 390mm two-piece rotors clamped by 6-piston Brembos up front and 350mm 4-pots out back, they’re almost worth the 392’s additional $7,500 cost of entry over an identically powered R/T Scat Pack, which must make do with “only” 360mm of rotor up front squeezed by 4-piston calipers. The first time you use the 392’s stoppers, you’ll find they’re practically worth their weight in gold – especially on a car this big and this powerful. For all its extra heft and endowment in the engine room, the Hellcat uses an identical brake setup – if that tells you anything. When I drove the SRTs on track last year, these brakes took a tremendous pounding before even a hint of fade was detectable, making me believe that with the right pads and fluid, even long lapping sessions wouldn’t pose a threat to this Chally. 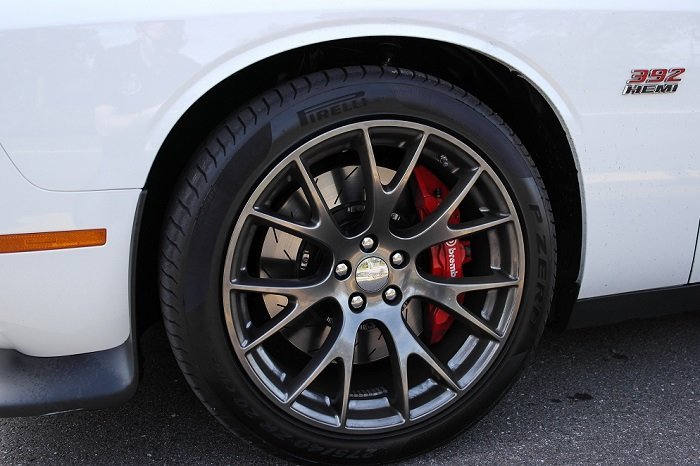 It’s probably pretty clear by now that I’m gushing about this car; I apologize for that. In the interests of presenting a fair and balanced review, I’d be doing you readers a disservice if I didn’t present a counterpoint to all of the things the SRT 392 is so wonderful at. I suppose if you really did want the best compromise of something approaching nimble handling, as well as a big V8 under the hood, the Mustang GT and Camaro SS do a better job of masking their heft, and indeed, they have a lot less of it to mask than the Challenger does. The SRT’s fuel economy isn’t what you’d call wonderful either; our 18.2 mpg week-long average was bolstered by a long-ish highway stint that returned close to 22 mpg in stretches. Of course, without that new 8-speed auto or the engine’s cylinder deactivation feature, the mileage would be much worse. And as I noted with the V6 SXT, the interior is a huge leap forward from the old car’s in terms of design and equipment, but there are still strides to be made in terms of the finish of some of the materials. 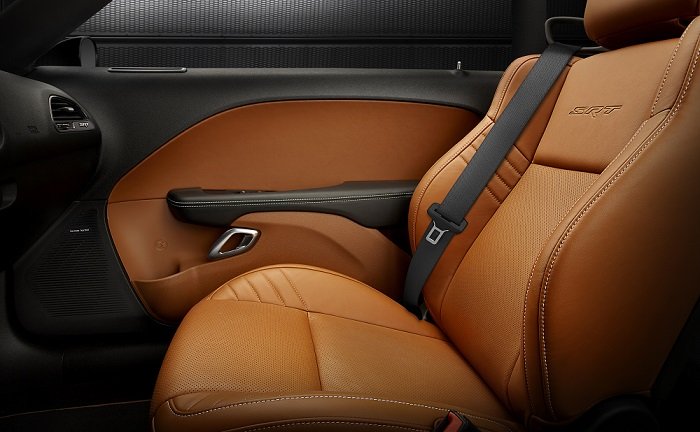 No-one I know who has sampled the SRT’s capabilities has come away with anything but praise for what the big car can do and the riotous nature with which it does it. Even at close to $50k, I can’t think of a car that will put a bigger smile on your face every single time you drive it. Consider the 392’s sticker price an investment in your mental well-being. 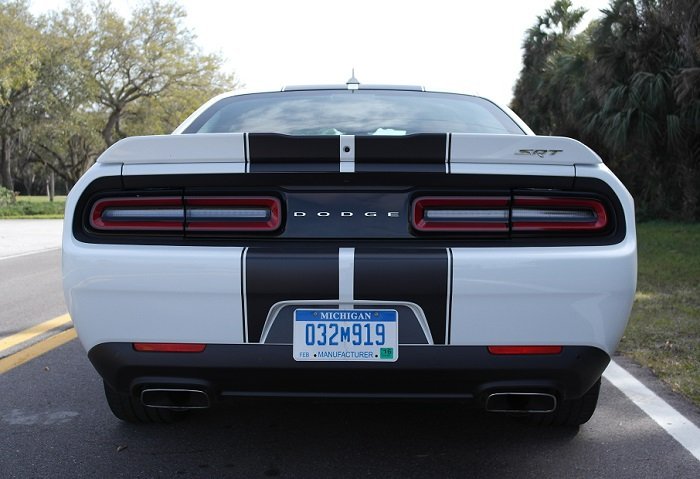