We were summarily impressed with the A3 sedan when we attended its press introduction in San Francisco a year ago. Since then, Audi dealers have had trouble keeping the little sedan on their lots as demand for the entry-entry-luxury segment ramps up. In order to broaden the A3 line, as well as go head-to-head with other small, high-performance German offerings such as the BMW M235i and Mercedes-Benz CLA45 AMG, Audi rolled out the S3 sedan – a more heavily pressurized and tightly suspended version of the previous 2.0 TFSI range-topper. So is this simply a Golf R in evening wear, or a legitimate successor to the performance Quattro throne? Read on to find out. 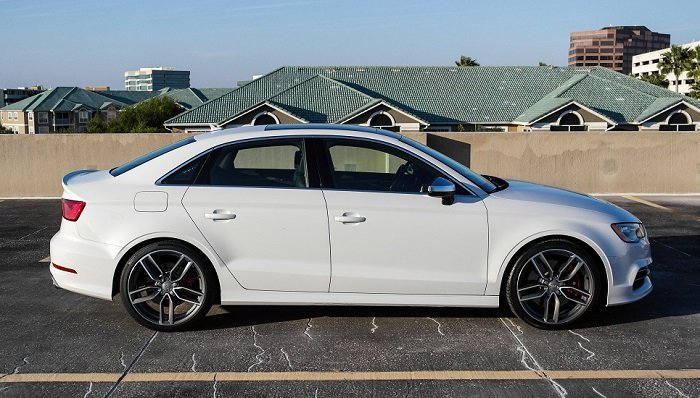 Based on the Volkswagen Group’s ubiquitous MQB platform, which underpins everything from the Golf to the TT to the euro-only B8 Passat, the new A3 was reintroduced to the US last year in a single shape – a four door sedan – rather than the five-door Sportback model that preceded it. We drove both variants – 1.8T front-drive and 2.0T Quattro – on some fantastic roads last year that really let its nimble chassis shine. Later last year, TDI and S3 models were introduced for the sedan in addition to a two-door cabriolet.

The S3 model seen here features a pumped-up version of the 2.0TFSI that has been thoroughly overhauled compared to the version available in the regular A3; among the beefed up components are the con rods, pistons and rings which quash a lower compression ratio of 9.3:1, the block and cylinder head castings, the valvetrain, and the turbocharger. Altogether, power stands at 292 and torque at 280 lb-ft, increases of 72 horsepower and 22 lb-ft over the A3 2.0T. A Haldex (aka Quattro) all-wheel drive layout with a six-speed DSG transmission is the sole drivetrain option for the S3 at this time, though this exact powertrain can be had in the cheaper VW Golf R with a manual transmission starting in 2016. 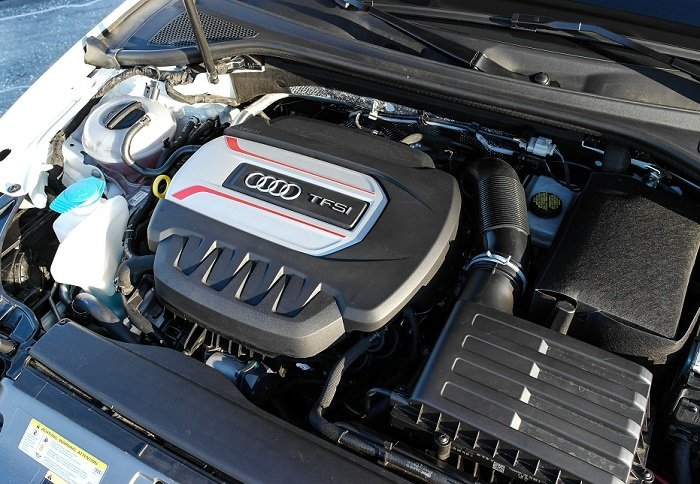 The aforementioned 2.0T feels underrated at 292 horsepower, because it moves the 3,450 pound S3 around with gusto. Once you get past a momentary pause waiting for the boost at the bottom of the rev range, power is delivered in a wallop, tapering smoothly to redline. The quick-shifting DSG transmission makes the most of the 2-liter’s “big turbo” nature, keeping things on the boil without issue up and down the gearset. The box’s ratios are closer than in the A3 sedan, and when controlled through the standard-issue paddle shifters, they make getting the best from all that puff quite easy. The print magazines have gotten mid-four second passes to 60 MPH and under 13 seconds flat through the quarter mile, and it feels every bit that powerful out on the road. 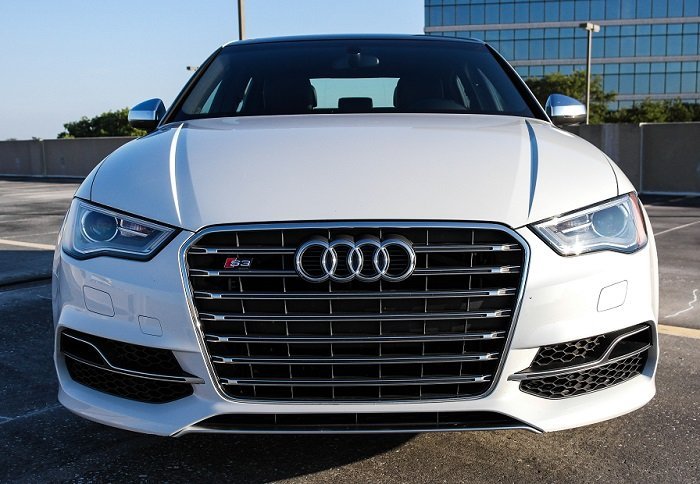 Equal credit goes to the Quattro all-wheel drive system for putting that power down without drama, although at times we wish it was  a little more dramatic. Lift-throttle tail slides aren’t something you can get the S3 to perform without serious effort or lapses in judgment, neither of which we exhibited during our drive of the sedan. Its nature definitely leans more toward competent and collected than playful. Of course if sheer grip is your thing, the S3 has got it in spades, equipped as it is with firmer suspension that’s closer to the ground and – if your budget can spring for it – magnetic damping control. Our car was equipped as such, and offers three modes (comfort, dynamic and auto) that are all fairly firm, though dynamic is notably stiffest and probably best reserved for the smoothest roads or track usage only. These settings can be altered and paired with your preferences for throttle, transmission, and steering response, as well as engine sound, through the standard Audi drive select function in the MMI system. 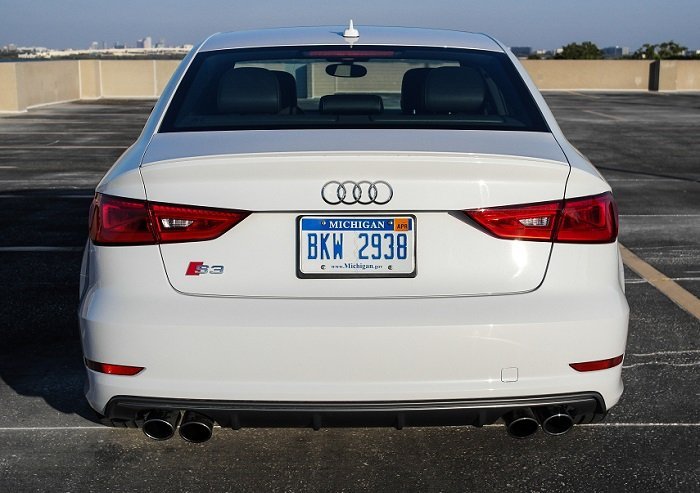 The S3 adds the bit of visual drama that’s lacking in the standard A3, though the clean, chiseled lines and tidy proportions remain. I heard members of the opposite sex throw around the descriptor “cute” on more than a couple of occasions during my time with the car (I’ll be generous and assume that term was being used for the car rather than me) but for those in the know, the larger front air intakes, underbody extensions and silver mirror caps will give the S3’s more aggressive demeanor away even if the subtle S badging does not. It’s as tidy looking as it is tidy dimensionally, with parking and placement on the road made that much easier by the S3’s diminutive footprint. It’s easy to see why the A3 model line has been successful in Europe, where space is at such a premium, because this platform seems to make much better use of its size than do its competitors. Shame we don’t get the three- or five-door hatchback versions that are across the pond for the ultimate in speedy practicality, but for now, we’re content with the balance the sedan offers.

Inside, the S3 treatment is largely the same as that of the A3, save for silver-faced gauges, sculpted front buckets, a racier steering wheel and a few scattered Ss. The base sedan already boasts the best interior in its class by far, so it’s clear why Audi felt little alteration was needed. The A3’s trick infotainment screen that motors up out of the dash is standard equipment here, too, as is a “panoramic” sunroof that borders so closely on normal size that we think the descriptor should be changed to just “sunroof”. Assembly is typically Audi top-notch, and equipment levels are good – the only items we found lacking on our car can be found elsewhere on the option sheet, namely a backup camera and blind spot monitoring (both should be considered a necessity due to the S3’s curtailed back window). Both are available in a bundled Driver Assistance package for $1,400. If we were feeling spendy, the full LED headlights ($1,050) and Bang and Olufsen sound system ($850) might also make the cut, though we found very little to complain about with the standard-issue xenons and 10-speaker Concert stereo. 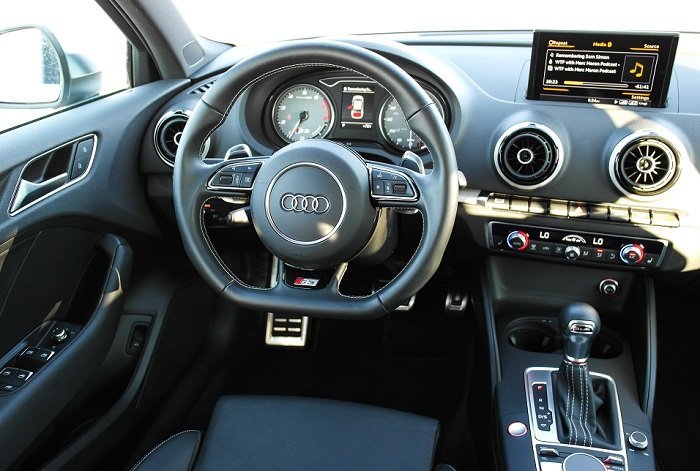 There’s very little to dislike about the S3, though as noted above, drivers in search of a more involving or playful chassis may not be fully challenged by the Quattro’s competence. The steering in particular comes in for some criticism for being light on feedback, and the ride seems to be set up stiffer than is strictly necessary. This could be a result of our car’s optional 19” wheels and rubber band tires, so those that often drive on particularly bumpy pavement may want to try both 18” and 19” wheel packages to see which one is more livable.

Finally, it must be said that the S3’s underpinnings can be had in both hatchback and manual transmission guise not only in Europe, but down the street at your Volkswagen dealer starting next year. The Golf R is poised to be the S3’s most serious competition yet, at least among the enthusiast set, since it’s priced several thousand dollars cheaper than the Audi yet offers all of the performance. What it lacks, however, is the Audi brand behind it, and the S3 is also well-poised to be a pivotal stepping stone for first time S-model buyers on their way up the Quattro ladder to the likes of the S4, S5 and S6.

Carrying over all of the base car’s charm and adding few qualities of its own, the S3 is a rapid and classy small sedan.

Audi provided the vehicle for testing purposes and one tank of gas. Photos by the author.