With competition in the large luxury SUV class heating up once again thanks to a recovering economy and falling fuel prices, Infiniti has glossed up its QX80 model for 2015 to battle the likes of Cadillac, Range Rover and Lexus. 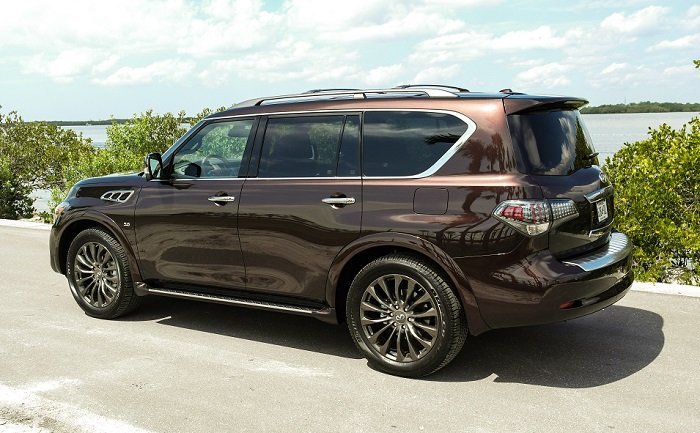 Though it’s been revised in the years since, this generation of QX was first introduced for the 2011 model year as the QX56 (prior to Infiniti changing their model nomenclature) and then morphed into the QX80 last year. Keeping the design fresh for 2015 are new front bumper and grille treatments, LED-accented headlights, new wheel choices and a few new colors. Also new is a comprehensive Limited Package that our tester came equipped with and is outlined further below. 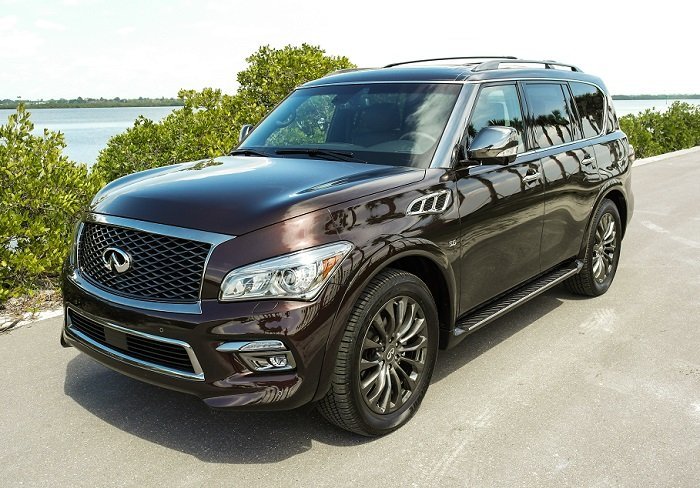 What haven’t changed are the QX’s stout bones, based on the foreign-market Nissan Patrol SUV and consisting of a steel body-on-frame structure with independent double-wishbone suspension front and rear, a 5.6-liter DOHC V8, and a seven-speed automatic feeding either rear- or all-wheel drive. It all sounds quite rugged, and it certainly is, but in execution everything works with a syrupy smoothness. Peerless ride comfort, a near absence of wind or tire roar and muted responses from the V8 conspire to create a relaxed and isolated driving experience. 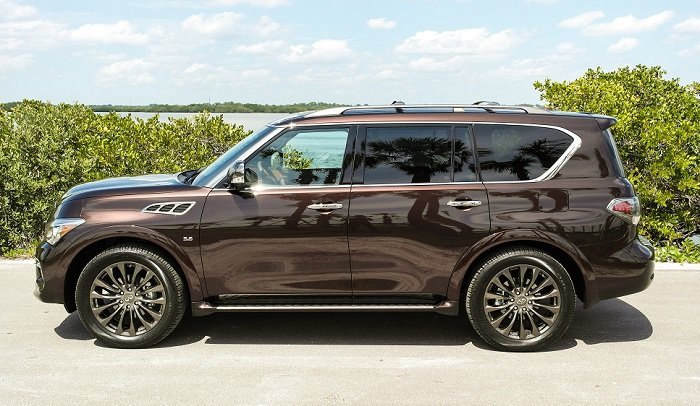 While the big Q is certainly large on the outside, at least its plus-sized proportions aren’t just skin deep. The QX80’s interior is richly appointed (due in large part to our tester’s full-zoot $10k Limited Package) and extremely spacious; seating up to 8 is available with an optional middle row bench, though with our truck’s business-class-worthy 2nd row buckets, passenger capacity drops to “just” 7. The Limited Package also brings with it enough  leather, wood and suede to make a custom-ordered Porsche jealous; semi-aniline leather with contrasting stitching covers the grab handles and speaker covers, black suede is swathed over the pillars and headliner from front to rear, and open pore matte finish ash wood covers pretty much every other surface besides the windows – likely left off as a safety consideration. 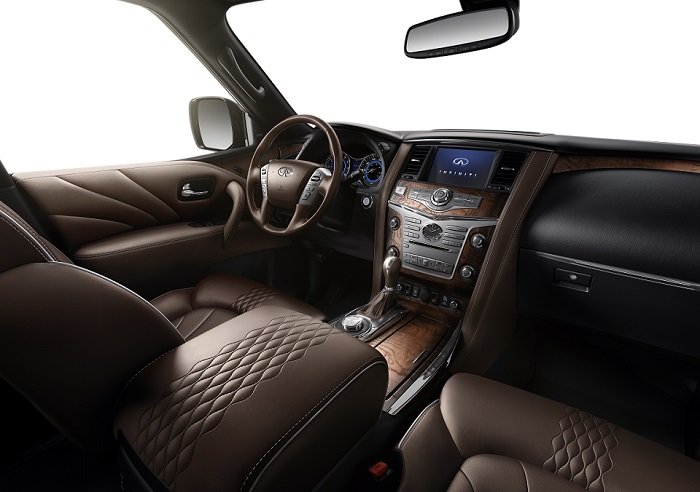 Of course, there’s already a suite of safety nets on board to keep you on the straight and narrow. The Deluxe Technology Package brings Blind Spot Intervention, plus Lane Departure Warning and  Prevention – items that go beyond the typical blind spot and collision alerts by actually keeping you in your lane should a car next to you go unnoticed. Similarly, Predictive Forward Collision Warning ups the ante by monitoring not only the car directly ahead of you, but also (somehow) the car ahead of that in order to warn you of risks beyond your current field of vision. Luckily for the tin-foil-hat crowd, all of these systems are defeatable, though we found them to be unobtrusive enough to leave on full-time. 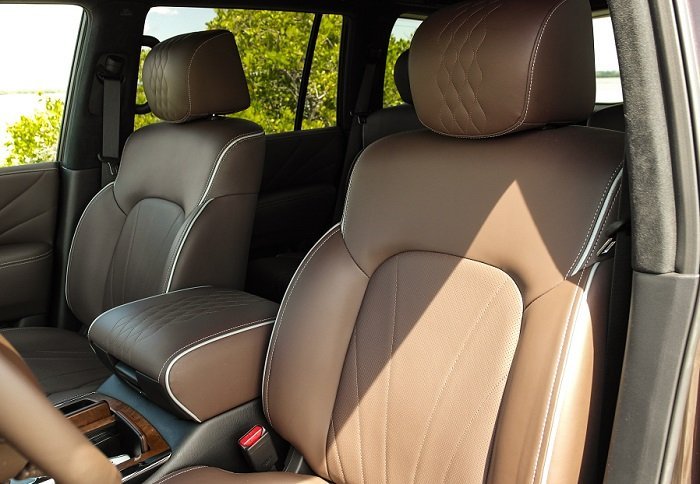 Did I mention the QX is massive inside? It is. Even the outboard positions in the third room offer adult-human-sized quarters, and the second row will simply spoil. Those of even the lankiest frames will find their knees well clear of the front seatbacks, and the Theater Package adds dual 7” seatback-mounted monitors for the ultimate in unfettered road trip enjoyment.

In terms of composure and comfort, the Infiniti ranks slightly ahead of the LX570 and a good bit higher than the Escalade. Included as part of the Deluxe Technology Package is Hydraulic Body Motion Control, which does away with steel sway bars and instead relies upon hydraulically-actuated dampers that seek to reduce body roll while improving ride quality. While you won’t ever forget you’re piloting a tall, top-heavy SUV, the resulting ride quality is exceptional. 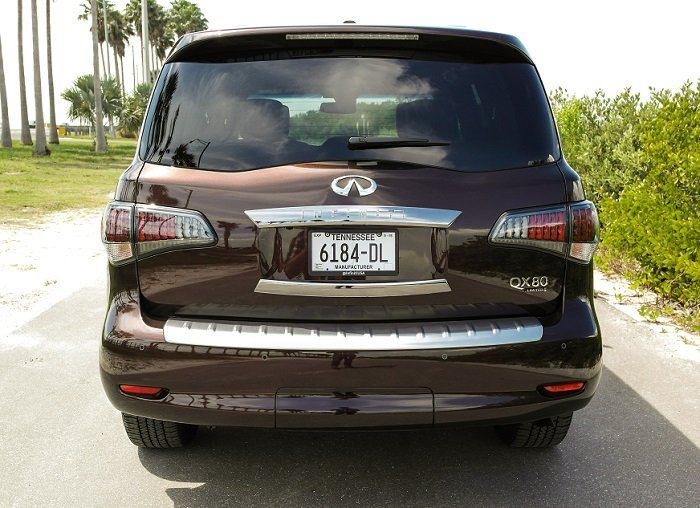 Also quite exceptional is the way engineers have managed to quell any semblance of road noise from a vehicle with an upright greenhouse and wide 22” tires; the only whisper of noise on the move comes from way down in the engine room, when some or all of the 5.6-liter V8’s 400 ponies have been summoned. Forward progress at full thwack is, if not exactly rapid, then at least adequate – the QX deceives its driver into thinking it’s slower than it is by isolating them from the experience. Shifts from the 7-speed torque converter auto ‘box are smooth and steering wheel paddle shifters are thankfully absent, in keeping with this vehicle’s purpose. 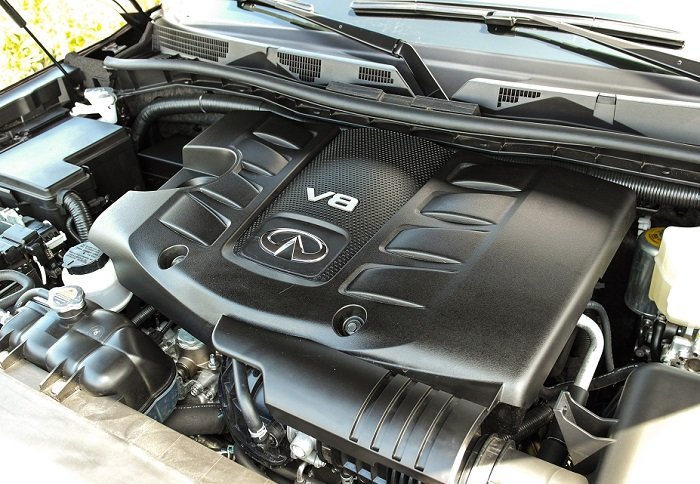 Despite its refinement, there’s no getting around the fact that the QX80 is still at its core a massive, all-wheel-drive beast – and fuel consumption is admittedly, shall we say – rapid.  My week-long observed average of 16.1 MPG was heavily bolstered by a long highway slog; a mix concentrating more on stop-and-go commuting or slow surface roads will drop that figure even lower, which isn’t great but probably expected given that stop-start functionality and cylinder deactivation are as yet unavailable on the QX80. With rivals moving to those technologies, now’s a good time for Infiniti to follow suit. 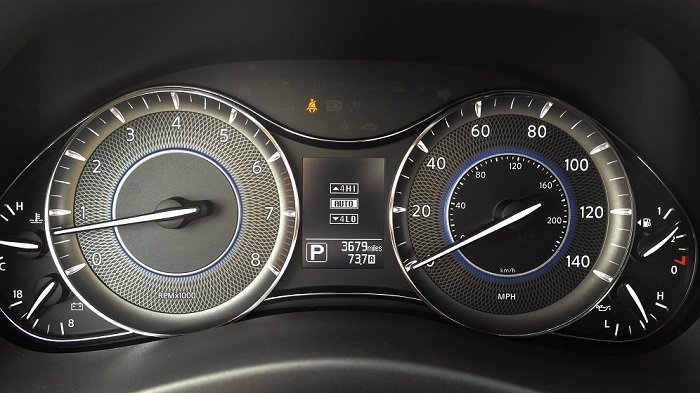 The Infiniti’s size sometimes frustrates in terms of its cabin layout as well – because of its width, I found the center touch screen and surrounding buttons to be somewhat hard to reach on the move. Since the screen lacks an iDrive- or MMI-like hand control on the center console (the buttons immediately below the screen perform that function) the issue is compounded. A better solution might be replacing the controls for the four-wheel drive system, which are placed to fall easily to the driver’s right hand, with a controller for the 8” infotainment screen’s myriad functions.

Plush and posh, the luxurious QX80 defends its younger large-SUV competition very well, though some small measures to improve its efficiency and infotainment usability would not go amiss. 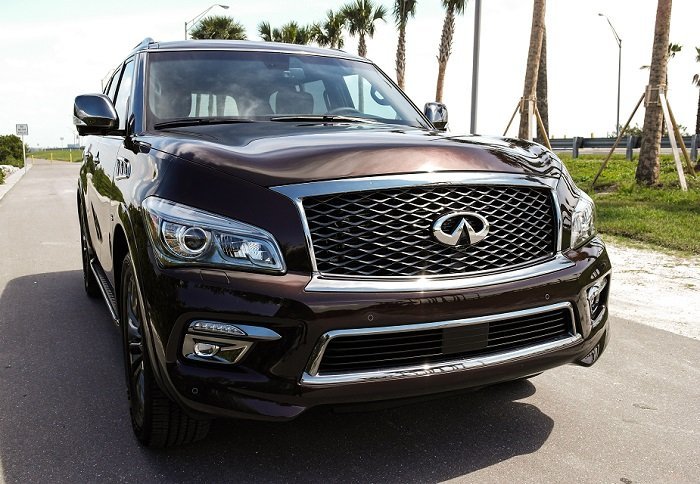 Infiniti provided the vehicle for testing purposes and one tank of gas. Photos by the author and manufacturer.