Ford’s new aluminum-bodied wonder was met with equal parts optimism and skepticism when it was introduced at last year’s Detroit show, a roll of the full-size dice not seen in the pickup segment in some time. So far, the gamble appears to be paying off: F-series sales have remained very strong against the competition, and last month’s numbers represented the best March for the pickup in nine years, despite production limitations. The F-150 has been a long-time class stalwart, though – we’re more interested in whether there’s real substance under the creased alloy skin. 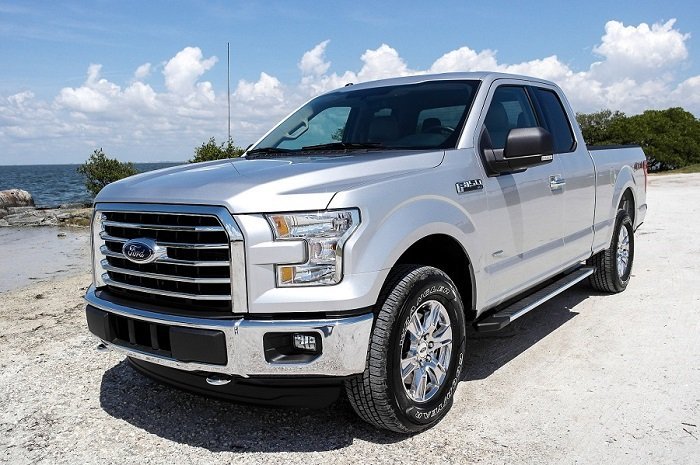 The 2015 F-150 represents a bold departure from the norm for the nameplate; by wrapping a boxed steel frame with an aluminum bed and body panels, curb weight has been pared down from the last all-steel model by up to 700 pounds in some cases. This has the expected effect of boosting fuel economy and performance at the same time. Contrary to popular belief, it also makes the truck stronger: because the powertrains have less “F” to tote around, you can haul more in the bed or on a trailer than before. Ford even performed its due diligence by developing the chassis and the new 2.7-liter EcoBoost engine to compete in – and finish – the Baja 1000 off-road race, under the guise of last year’s bodywork. An EcoBoost 3.5-liter twin-turbo V6 or naturally-aspirated 3.5-liter V6 and 5.0-liter V8 round out the available engine options. All come mated to a 6-speed automatic. 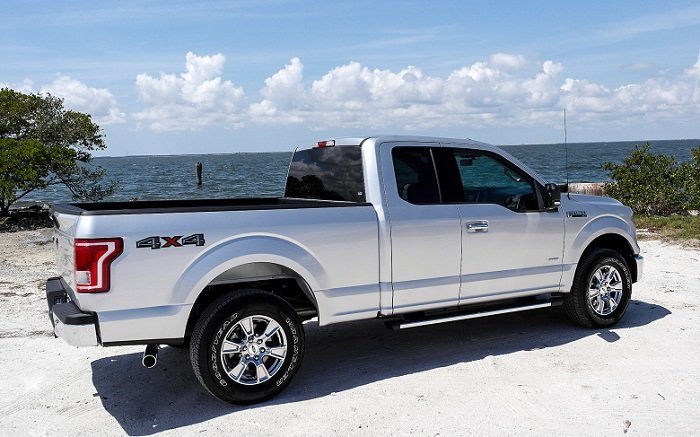 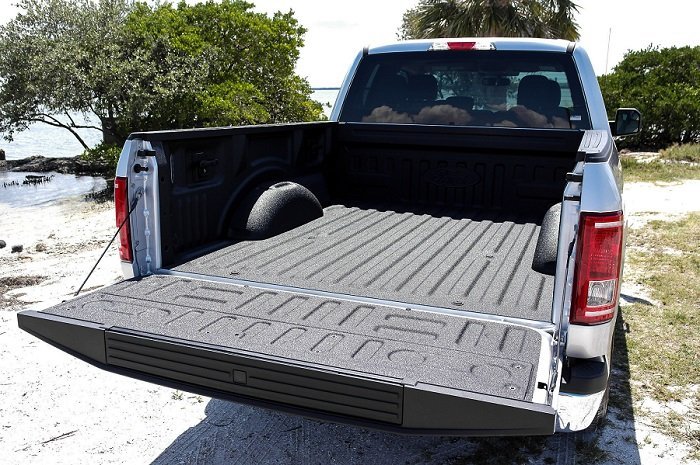 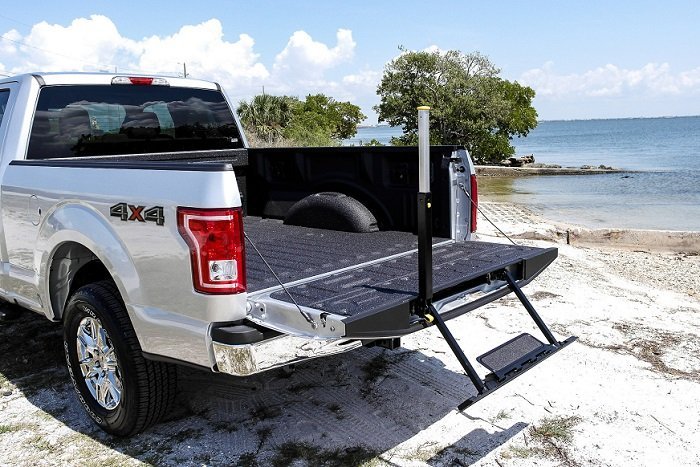 Our tester was something of an anomaly in the world of high spec, loaded-up press fleets: a middle-of-the-road, common spec model. And that was a pleasant surprise. Situated between the entry point XL trim below and Lariat, Platinum and King Ranch trim levels above, the XLT is the volume model. We weren’t left wanting for features, either, despite the relative dearth of options on our test vehicle (although no less than 10 individual options and packages crowd the sticker, this is still on the light end of what’s typical for pickups). 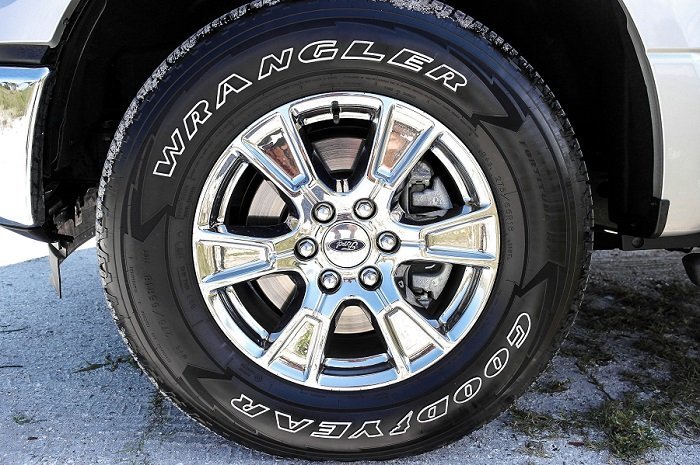 Despite being all new, the F-150’s exterior looks are perhaps the least-changed part of the truck – although that’s no bad thing. It remains a good-looking pickup, buoyed by broad shoulders and a tall stance that speaks more “Super Duty” than ever before. 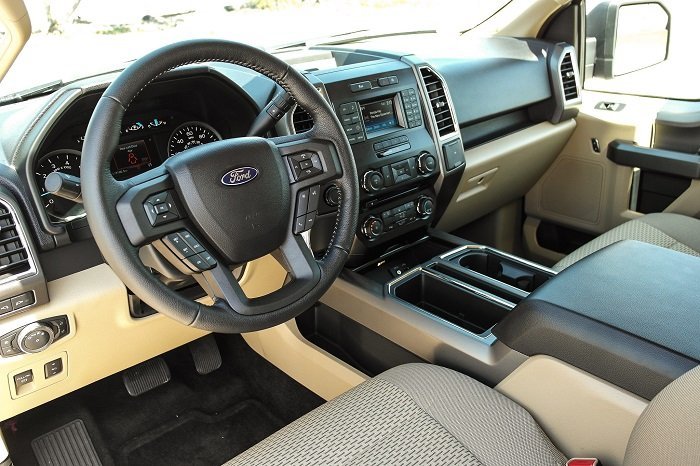 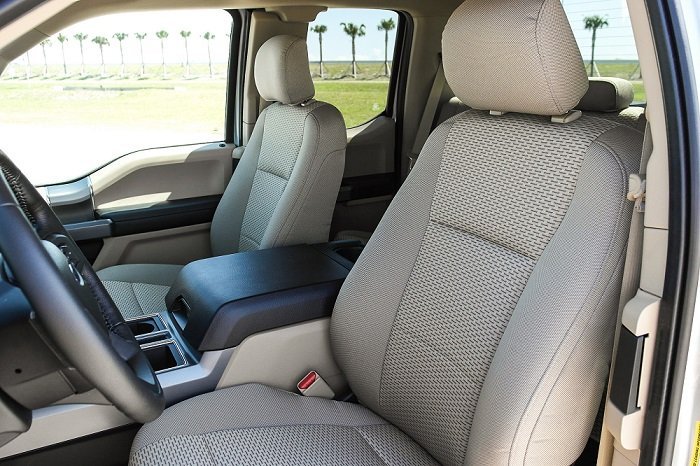 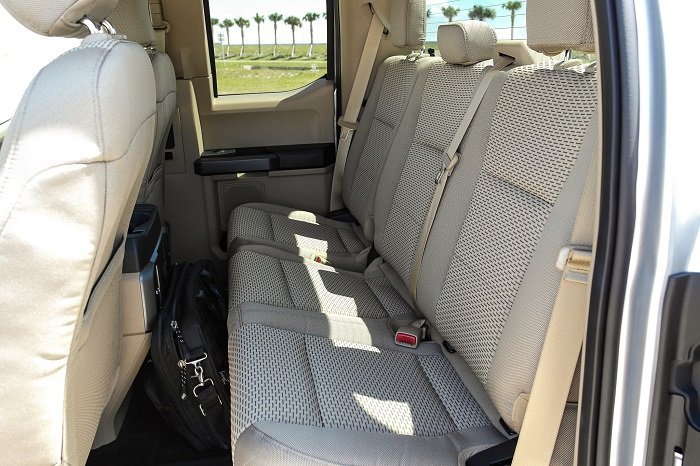 The interior is also handsomely outfitted, and will likely feel familiar to those with experience in the previous generation. The biggest changes are the enhanced standard and available equipment levels, and better fit and finish. Our cloth-equipped tester felt well-appointed, tightly put together and rationally laid out. Comfort levels with the optional front buckets are high, though our SuperCab tester’s rear seat space and ease of entry/egress were noticeably curtailed compared to the limo-like SuperCrew. For drivers who will only use the back seat infrequently, the SuperCab should be just fine. If the truck is to act as a stand-in for a sedan, however, the SuperCrew is the way to go. 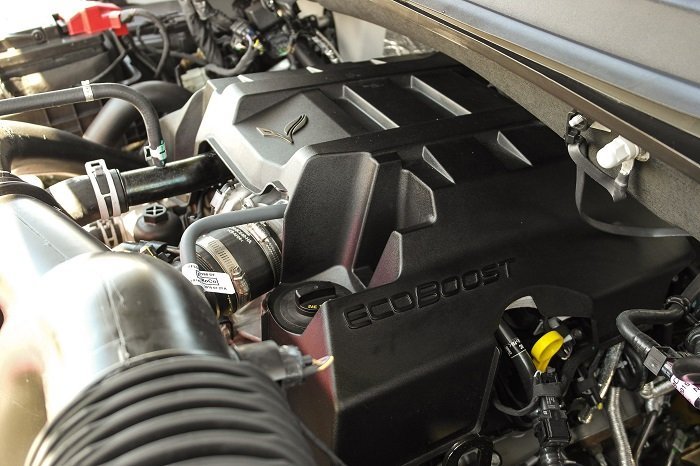 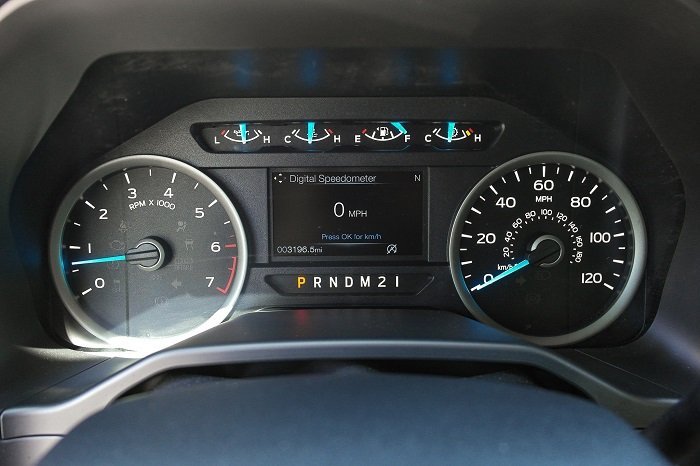 Although a naturally-aspirated DOHC V6 comes standard on the XLT trim, the vast majority of these pickups will go home to customers with one of the available EcoBoost V6 or 5.0 V8s under the hood. The standard six will tow up to 7,600 pounds and return 25 miles per gallon on the highway, but both the EcoBoosts and the Coyote V8 are highly tempting propositions. Our truck, in keeping with its minimalist approach to the option sheet, came equipped with the smaller EcoBoost V6, which commands a premium of just $795 compared to $1,595 for the Coyote V8 or $1,995 for the 3.5-liter EcoBoost. Endowed with only 2.7 liters of displacement, I expected the V6 to be a bit light on brawn when tasked with motivating a big 4×4 F-series – even one that is a bit lighter at the scales. Frankly, after a week with the truck, I saw little reason to spend the extra cash on the 3.5-liter EcoBoost, save for two reasons – you intend on hot-rodding your F-150 at the drag strip, or you plan on taking full advantage of the 3.5 EB’s 12,200-pound towing capacity (the 2.7 totes 8,500). 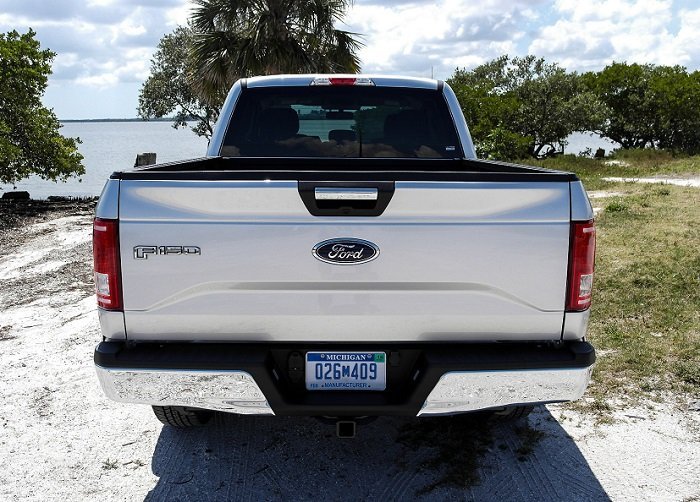 The 2.7 EcoBoost pulls strong from just off idle all the way to redline, producing the kind of torque that some V8s can only dream of – 375 lb-ft at just 3,000 rpm. No, it doesn’t produce the sonorous exhaust note that you’d get with the 5.0 – some V8 connoisseurs might consider the extra $800 money well spent, just for the sound. But in categories that matter, the 2.7 V6 matches or betters what you’d find in competitors’ small V8s. And its trump card – fuel economy –made me put any preconceived notions I held about the practicality of daily driving a full-size pickup to bed. Thanks to tech additions like engine start-stop and active grille shutters, our truck returned over 20 miles per gallon (20.8, in fact) in a week’s worth of mixed commuting. That’s outstanding fuel economy for a pickup, no doubt, but the fact that it’s been achieved without any sacrifice in comfort or capability is doubly satisfying. 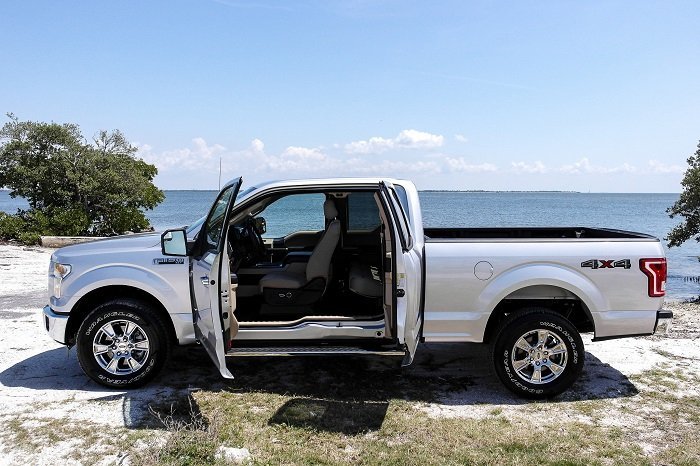 The rest of the driving experience is equally pleasant. Our 4×4 tester’s ride quality was commendably smooth and quiet, and although this is still a physically tall vehicle with mixed purpose tires, handling remained sure-footed and stable. The helm even felt reliably tethered to the front wheels and gave decent feel, which is a rare blessing in this class. There wasn’t a single element that could be called into question or considered an annoyance, in fact – the truck is simply that well thought out. Not only could I see why people commute in these things, I wanted one of my own to commute in. A commanding seating position; a simple, stretch-out comfortable cabin; and enough back pocket capability to tackle any weekend excursion – who wouldn’t want one of these in the driveway? 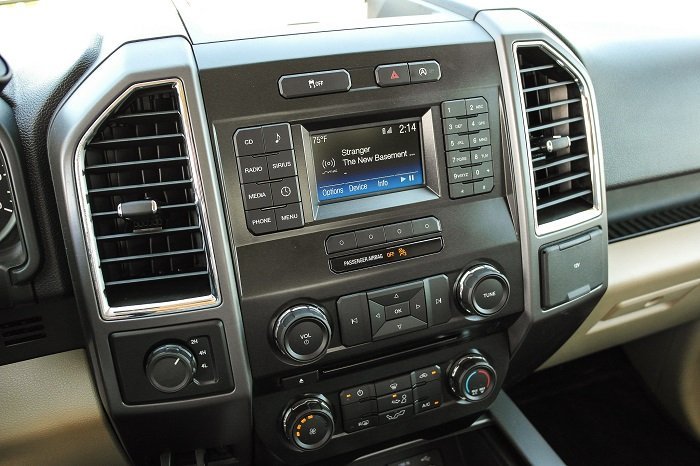 I pulled myself back from the edge and managed to hand back the keys at the end of the week, but those in the truck market should take note: Ford has stepped up its full-size pickup game, and is now firmly in control of the ball. 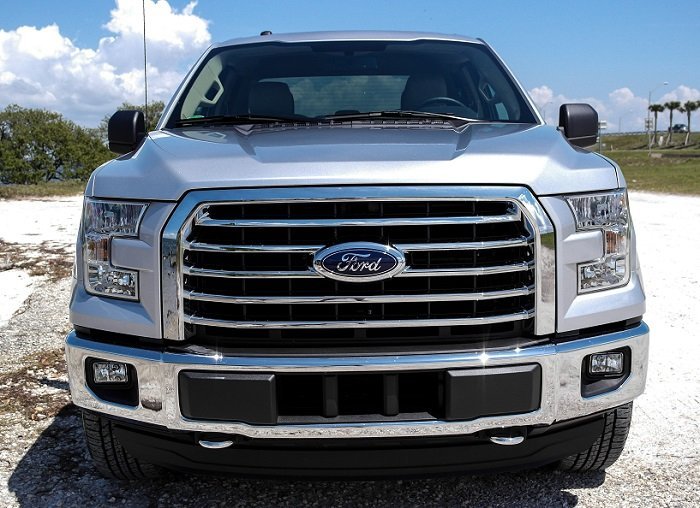