Anyone – alright, any car nut – who’s travelled to Germany likely remembers their first time being greeted outside the airport or train station by a gleaming row of custard-colored Mercedes E-klasse. Nearly every one of them probably had a diesel engine ticking away, an interior outfitted with cloth seats and perhaps even plastic wheel covers, of all things. It’s a memorable image because for those who were raised in the US, Mercedes-Benz has a long-held image as being a builder solely of luxury cars. And luxury cars certainly don’t sit outside train stations with fare meters on the dash and surly cab drivers behind the wheel. Jarring and amusing in a single instant, it crystallizes the understanding for the travelling auto enthusiast that in Germany, Mercedes-Benz is simply a full-line car maker – churning out everything from vans to cabs to front-wheel drive economy cars. 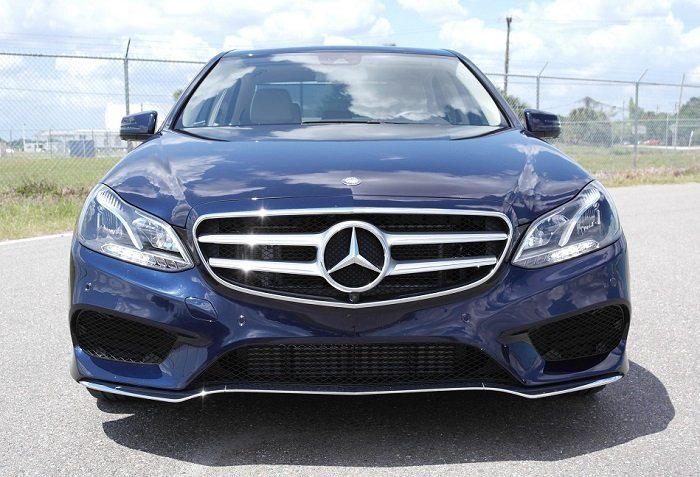 As it happens, the E250 pictured here is about the closest equivalent of those pale yellow taxi cabs that we can get in the states (new, anyway). And while you’ll probably spend a pretty penny convincing Mercedes-Benz to paint you one in fleet colors, you can at least order the Munich cab’s equivalent powertrain – a four-cylinder turbodiesel with an automatic transmission. It’s the first Mercedes-Benz compression-ignition four-cylinder available on our shores in quite some time – since the late 80s in fact, when the underpowered 190D departed our market. Since then, Benz has offered the diesel-averse U.S. market only its punchier, top-spec 6-cylinders from across the pond – that is until last year, when the E350 BlueTEC dropped two cylinders to become the E250 BlueTEC. 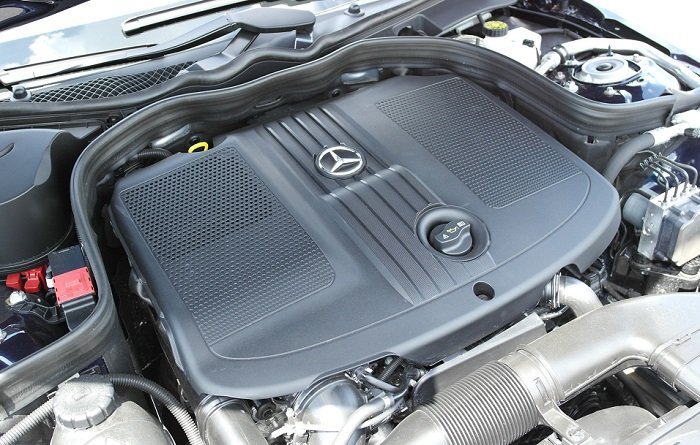 Still a twin-turbo, the inline four in the E250 features one small turbocharger that aids response off the line and helps bolster the larger turbo, which takes over at higher engine speeds. Though power drops by 15 horses and torque by 31 lb-ft (to a still-meaty 369), economy figures rocket upwards thanks to the loss of two pots – ratings of 28 MPG city and 42 highway eclipse those of the old six cylinder, which was rated at 22/32. Aside from the new powerplant, the rest of the E-class sedan pictured here is unchanged from the revised model that debuted for 2014. Which is no bad thing; to our eyes, it’s still one of the best looking cars in its segment. 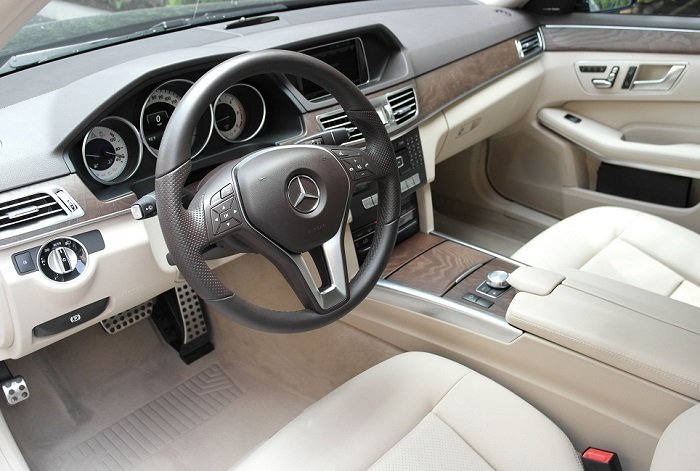 The E250 displays all of the usual E-class trademarks: light, accurate steering. An isolated ride. Muffled road and wind noise. An air of general competence and a disregard for faked sportiness. And my personal favorite: a short dashboard nestled between two thin A-pillars, which helps create a panoramic view of the road ahead that’s crucially missing from so many of today’s luxo-tanks. 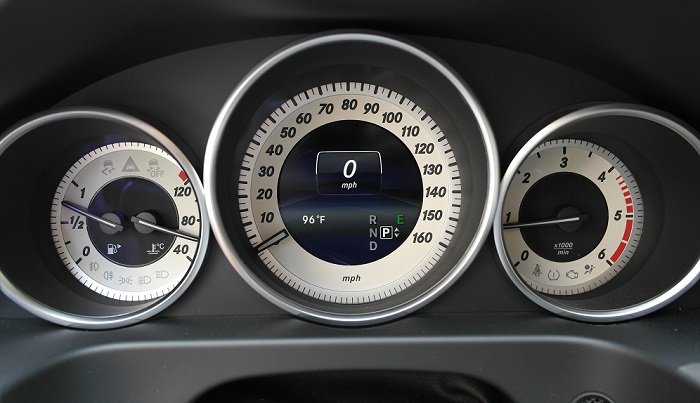 As I mentioned before, Mercedes-Benz has worked hard to cultivate a luxury brand image that stands in slight contrast to the full-line carmaker mentality that is prevalent in its home market. To that end, a clattery diesel engine was not in the cards for the upscale E. They’ve done a good job making this four-cylinder feel like a larger, non-diesel powerplant from a NVH perspective. If you pop open the hood with the engine running, you’ll be in no doubt as to what fuel powers this 2.1-liter. But on the go, the difference in character between this and any other modern, direct-injected four-cylinder powerplant is virtually nonexistent. 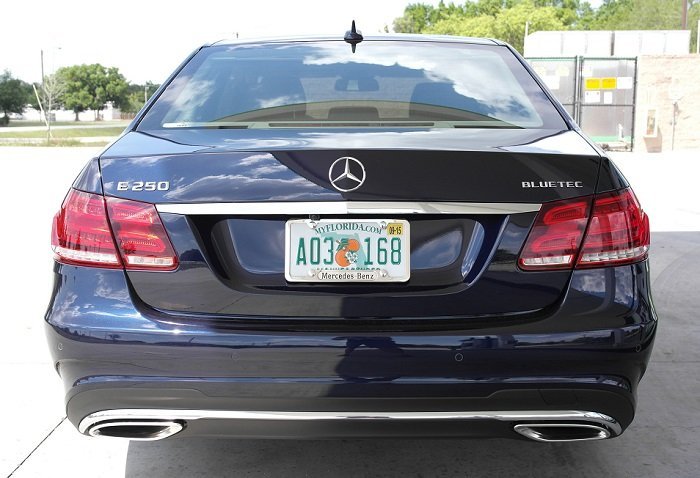 You will notice a difference in two crucial metrics: off-the-line punch, and fuel economy. A turbodiesel’s naturally low-revving, torquey nature has been augmented in the E250’s case with a second, smaller turbo. A rarity for inline four-cylinder engines, the BlueTEC’s twin turbochargers help dole out 369 lb-ft of torque over more of the E250’s powerband. As a result, instead of the usual thousand-rpm window of usefulness most diesels exhibit, the two turbochargers work together to provide good throttle response down low in the rev range, and decent power up top where diesel engines often falter. A 7-speed automatic gearbox wrangles all that torque smoothly and shuffles imperceptibly between cogs. Though it’s down slightly on power and torque compared to the six-cylinder it replaces, it’s nearly as quick out in the real world. Economy measured in at 33 MPG during my week with the car, and a heavy right foot did little to cut in to that figure. Longer highway stretches registered closer to 40 MPG in my hands, and tank range checked in at a solid 550 miles. 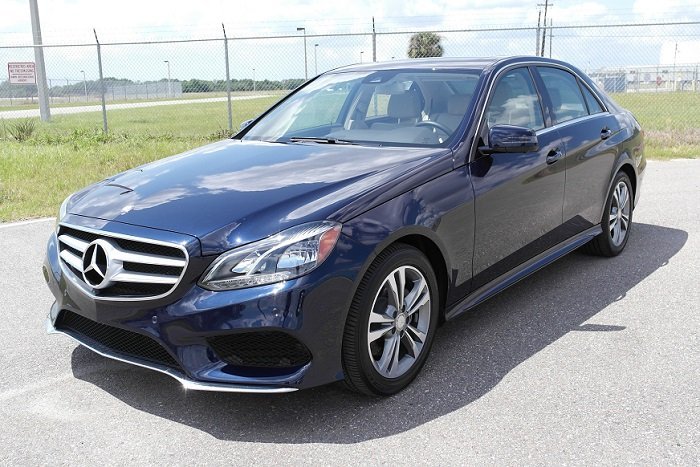 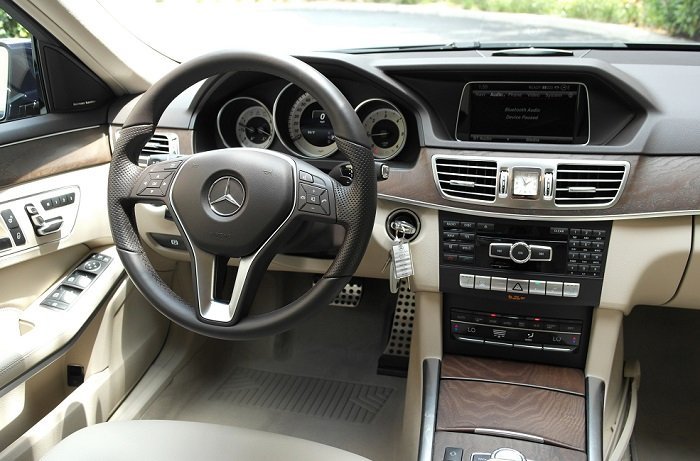 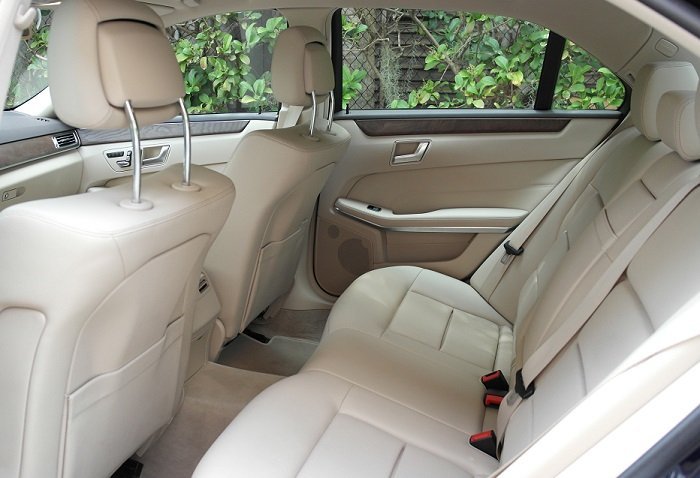 Perhaps the only knock against the current E-class has to do with familiarity; though re-sculpted for 2014, this body shape has nevertheless been with us for some time now, and though I still find it attractive, newer, edgier competitors have since joined the market in the form of the Lexus GS, Jaguar XF and Cadillac CTS. The 5-series remains a class stalwart, and its replacement is just around the corner. To that end, Mercedes will soon roll out a new E-class with a more modern interior and swoopier exterior styling more in line with its current C- and S-class offerings. Nevertheless, this current E250 seems like the type of car built for a buyer that doesn’t care about the latest in bleeding-edge style or gadgetry. Instead, it feels purposefully engineered to provide years of reliable, economical, dignified service – traits that have served it well both as a luxury cruiser and, in Germany at least, a fleet staple. 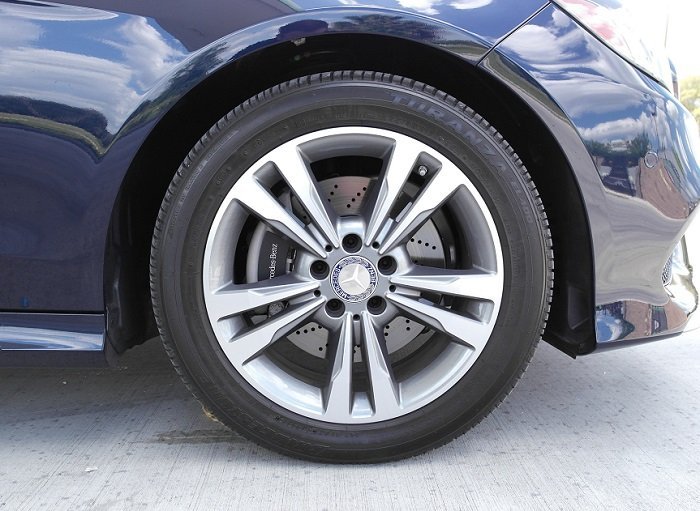