The Mustang has long been Ford’s bread-and-butter performance car, the granddaddy of the pony car segment, object of desire for administrative assistants and mulleted gentlemen alike (depending on engine choice). OK, that last shot might be a bit unfair. Even this article’s distinguished author, widely known for his discerning taste, once succumbed to the Mustang’s blue-collar charms. In a moment of fitful lust I bought a brand new 2011 GT Coupe, a five-liter in screaming yellow, equipped with the Brembo brake package and a manual transmission – as it should be. That was a fantastic car, loaded with character if a bit rough around the edges, but its charm wore off quickly for me and I retreated to the import brand camp I knew and loved after 10 short months with it. Perhaps this new EcoBoost model will be able to change the minds of even the most hardened import fans like me?

This current generation, or “S-550” as it’s known within Ford’s engineering halls, has been heavily and most notably revised from the car I owned in three key areas: exterior styling, suspension design, and interior layout and quality. The body has been noticeably creased and cropped, and the resulting shape is lower, wider, more modern and altogether angrier at the same time. The interior’s taken a giant leap forward not only in design, but in material and build quality. This is the first Mustang to be designed from the get-go to be sold overseas (notably Europe), and you can tell that extra attention was paid to getting the small trim details just right for our apparently-more-discerning Continental cousins. Finally, and perhaps most importantly, the chassis has finally been transitioned to a fully-independent suspension setup, ditching the live rear axle once and for all. I won’t dive into the details that have already been covered ad nauseum in the automotive press by now, but suffice to say it has the effect of making the Mustang a much more stable, comfortable and refined platform to throw around, although far less tail-happy. 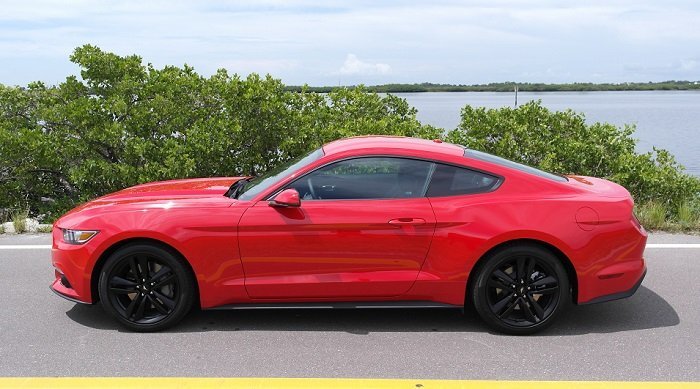 Where to start? The styling just plain works, and in our tester’s Race Red with blacked out 19-inch wheels, drew its share of compliments. The interior is similarly handsome, and has been screwed together in such a way that it no longer draws ire from the dash-stroking set. I might go as far as saying that I couldn’t notice a discernable difference in quality between this and the VW GTI I had a few weeks back, but that’s probably an exaggeration. Even if it’s not quite up to German levels of interior quality yet, it’s good enough to be mentioned in the same breath, which is a huge accomplishment. Our car lacked the optional Recaro seats, and might have been better for it – my time with it included a lengthy road trip, and even over many hours, the standard power seats proved comfortable and adept at staving off lower back fatigue. The same probably cannot be said of the Recaros. 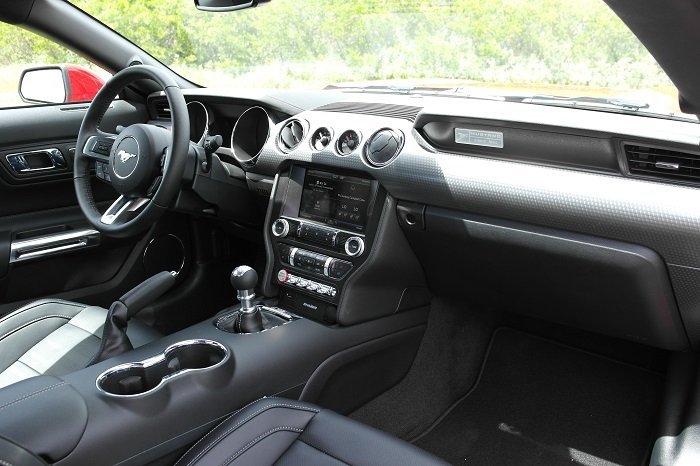 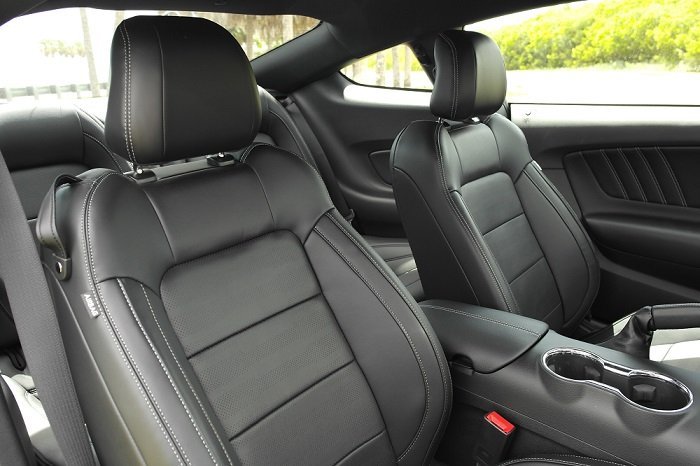 While it lacked Recaros, at least our tester came equipped with the Performance Package, which is a must-tick box on the option sheet for anyone even resembling an enthusiast. For $1,995, you’ll receive a veritable laundry list of spirited driving “musts” – bigger brakes (352mm front/330 rear, with 4-pot front calipers), stiffer suspension (retuned springs, dampers and bushings, plus a larger rear swaybar), a beefed up cooling system, the aforementioned ebony-dipped 19×9” alloys, Pirelli P-Zero tires wrapped around those alloys, a shorter 3.55-ratio final drive, and a couple of gauges between the air vents inside to monitor oil and turbo boost pressure. Despite the firmed-up performance suspension, the Mustang still provides an isolated ride and rarely jostles you even over the craggiest railroad crossings. Railroad crossings were things to be avoided at all costs in the last Mustang – not so in this car. 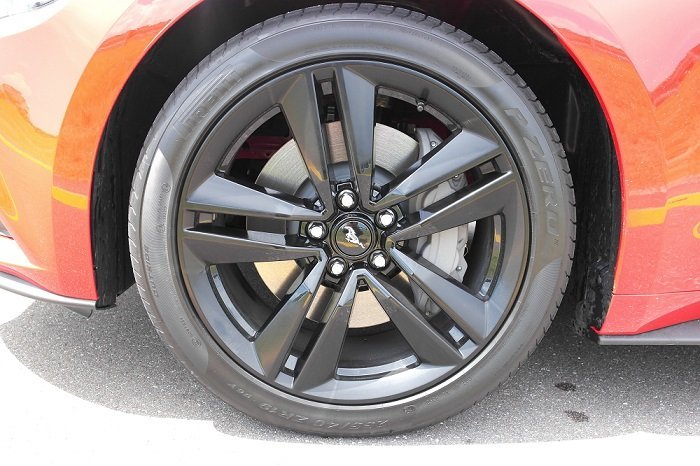 Steering accuracy is another previously unknown pleasure that has now been thrown in gratis. The rack is electrically-assisted, but there’s a surprising amount of feedback, and feel is spot-on. The feel of the six-speed shifter is also spot-on, although it used to be a huge Mustang sticking point. The much-maligned Getrag MT82 gearbox of the previous generation is still present, but the shift linkage – long suspected to be the true culprit in the Coyote Mustang’s often balky shift action – has been heavily revised, and the improvements are palpable. The shifter has short throws, a light (but not too light) action, and the clutch is nicely weighted. In short, it’s a pleasure to row, and makes my own Mustang’s early-morning second gear “crunch” seem but a distant memory. 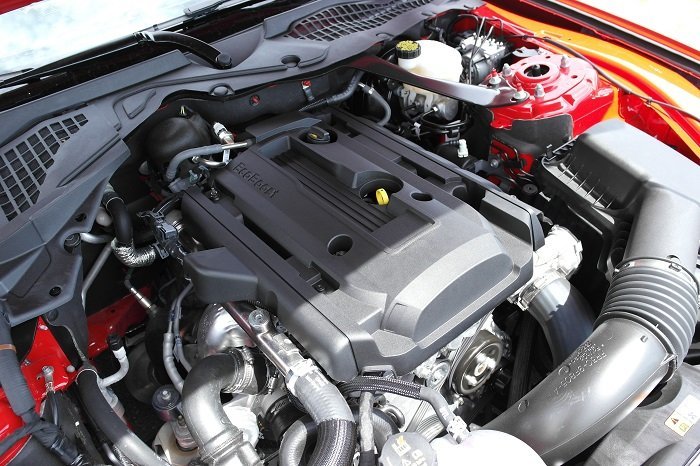 Though the S-197’s “Cyclone” 3.7-liter V6 and “Coyote” 5-oh V8 carry over mostly unchanged – the 5.0 receives some incremental internal improvements that bump power up to a healthy 435 and torque to 400 lb-ft – but the real powertrain news with the introduction of the current generation was the addition of a four-cylinder to the Mustang’s option sheet, something that had been dormant since the death of the Fox body in 1993. Not just any four-cylinder, but the spiritual successor to the vaunted SVO – a 2.3-liter turbocharged EcoBoost unit putting out 310 horsepower and 320 lb-ft of torque. Those are figures the SVO could only dream of, and they’re achieved through a combination of direct injection, a 9.5:1 compression ratio, and a twin-scroll turbocharger that puffs up the pressure to an indicated 18 PSI in some circumstances. For anyone that dabbled in the black art of turbocharging back in the 1990s, that’s an anxiety-producing boost figure. These days, it’s commonplace. Still, Ford has reassuringly equipped the EcoBoost’s bottom end with a forged crank and con rods, piston-cooling oil jets, and a deep-sump oil pan to make sure nothing goes boom.

Already being fairly familiar with the excellent Coyote powerplant, I was excited to see that my tester was outfitted with the EcoBoost. I’d been eager to try it, especially after sampling the underdog 2.7-liter turbo unit in the new F-150 that punches far above its weight class when the pedal is dropped. So I was a bit disappointed when I first wrung the Mustang out to find that 310 horsepower really ain’t what it used to be. Sure, the turbo mill was smooth and seemingly devoid of lag, but it lacked the excitement promised by those on-paper stats. That is, until I ran the tank dry and re-filled it with 93 octane, at which point the four-cylinder finally came alive. You see, there’s no requirement to run premium in the EcoBoost – Ford’s engineers built in a wide safety net, which is great if you aren’t obsessed with performance. But this is a performance car, and luckily, for those willing to dish out the extra 30 cents per gallon, you’ll be rewarded with a ton more responsiveness and urgency in return. It also made me wonder what might be possible with a basic performance upgrade of an exhaust and reflash – I think the answer is, “good things”. 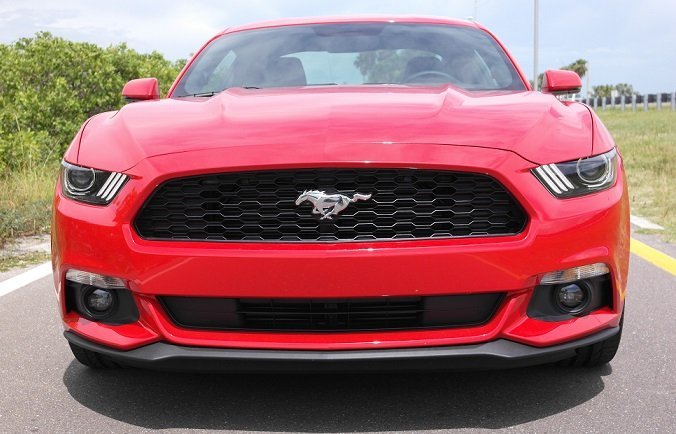 For all of its charms, the EcoBoost just doesn’t have that characteristic Mustang rumble when the engine comes to life. In fact, it the 2.3-liter can sound downright agricultural at times – although the same can be said of many modern turbo fours. For those with lingering regrets about passing over the V8 option box, rolling down the windows and listening to the characteristic whistling and chuffing of the turbocharger as it pressurizes the 2.3-liter four provides some consolation – although the pure Americana of a 5-liter’s rumble is still a loss that’s felt palpably every time you trounce on the EcoBoost’s throttle. As good as the four-cylinder is, the GT is still the undoubted performance king of the Mustang line-up at the moment. 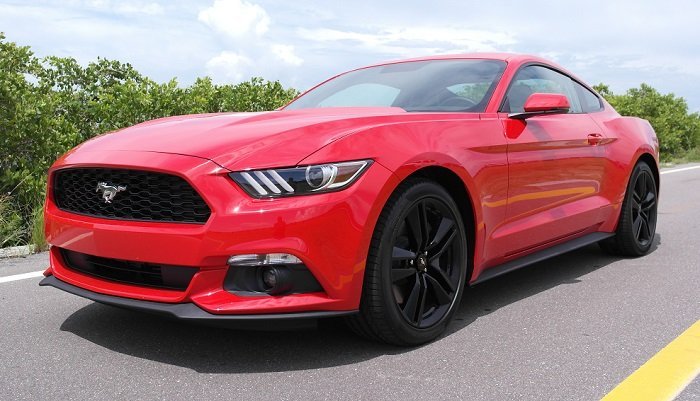 The pangs of regret I felt when handing back the Mustang’s keys after two weeks and a thousand miles told me all I needed to know about how vastly its capabilities as a grand tourer have improved. Though it shares a name and a couple of powertrains with the S-197 that preceded it, this is a far more refined and mature coupe than its rude, slightly crude ancestors – and it’s not worse for it. The Mustang has finally become a fully resolved two door that will appeal to boy racers, Sunday cruisers and commuters alike.