Enthusiasts have long bemoaned the wider automotive market’s taste shift away from sports cars toward SUVs and crossovers as the most coveted vehicular status symbol. BMW, while well-positioned to capitalize on this trend with its broad range of sometimes line-blurring crossovers, has nevertheless felt the sales hit to its Z4 roadster line in the last few years. While I firmly count myself among the “enthusiast” camp, I realize that as much as I may try, my tastes will never mirror the wider car shopping public’s at this point. When I recently spent a week with BMW’s sole remaining two-seater, I tried to curb my enthusiasm (so to speak) and view its relevance through the lens of the typical new car shopper – one who may typically fall for a new BMW with an “X” prefix in its name rather than a “Z”. 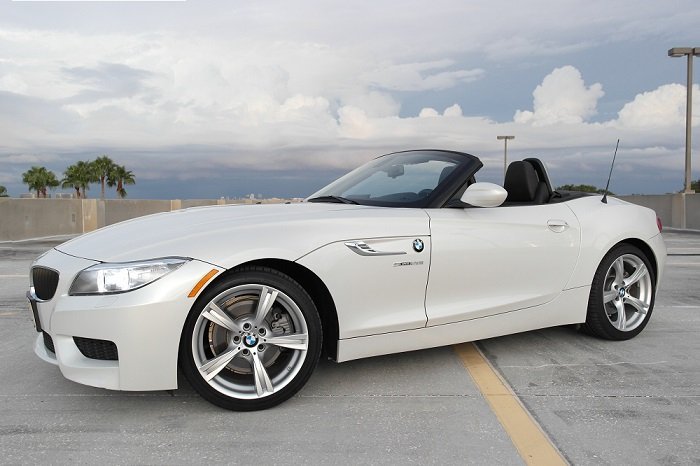 A sports car’s most defining characteristic is style, and that’s been a BMW Z-series asset from the get-go. Whereas the first-generation Z4 (replacing the Z3) went all edgy and wedgy (a clear product of BMW’s “flame surfacing” phase from the early 2000s), this second-gen car is softer around the edges, a bit more feminine, and definitely more elegant. It’s not exactly what you would call a macho shape, but when outfitted with the M Sport package as our car was, it at least does a passable impression of looking tough. 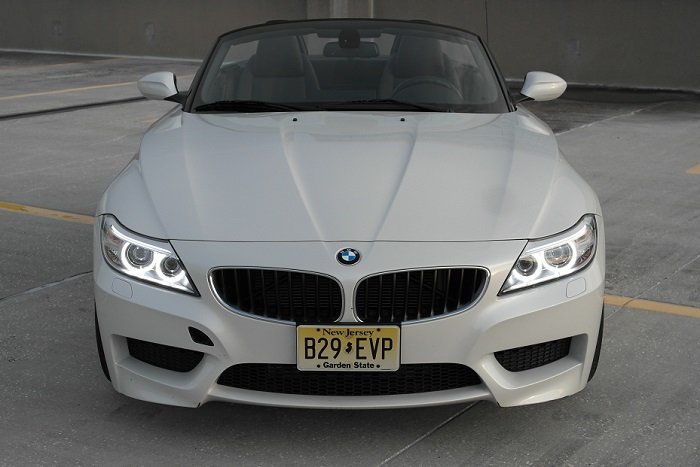 The interior is a departure from other modern BMWs in that it is not dominated by a large, integrated infotainment screen and iDrive controller. Both are present, but they’re smaller and feature less of the tech wizardry found elsewhere in BMW’s lineup. Instead, a high cowl line and dashboard controls that are canted toward the driver support the dominant theme of hedonism so inextricably linked to roadsters. 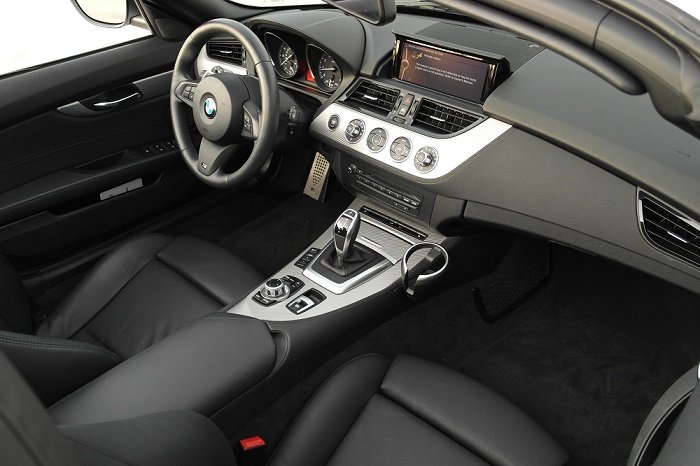 Larger-framed drivers may find the confines of the Z4’s cabin a bit, shall we say, cozy. This is a roadster, after all, so passenger space isn’t at the top of the priorities list. Still, a bit more elbow room wouldn’t go amiss. Despite this, it’s still a nice place to spend time, with materials that are up to snuff as well as a booming sound system. The retractable hardtop stows quickly and easily, though it erases most of the trunk’s storage space in the process. A set of movable covers back there help keep your groceries from getting crushed should an impromptu sunbath be required. 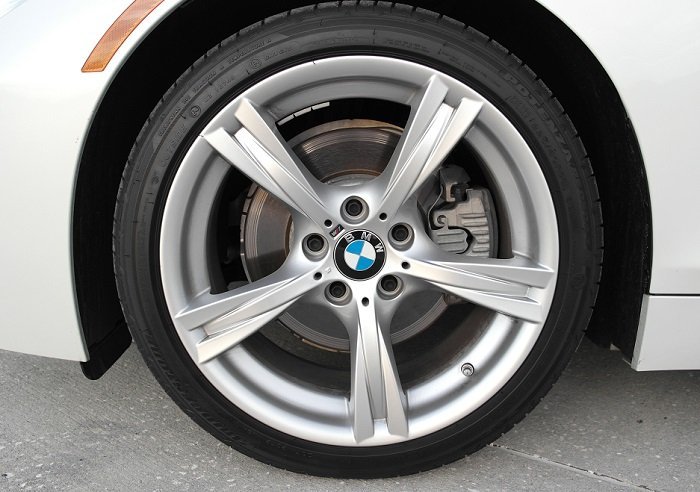 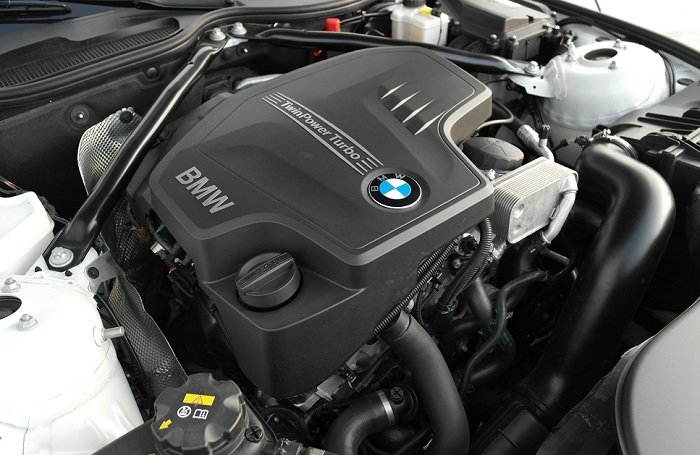 But enough of the touchy-feely stuff…how does the Z4 drive? Well, let’s get this out of the way right now – although a -28i suffix in BMW-speak used to describe a straight-six powerplant with somewhere around 3 liters of displacement, that’s no longer the case. Instead, the “-28i” found so prodigiously across the BMW portfolio now refers to the N20 turbocharged four-cylinder engine. It’s also not half bad – even though it’s not blessed with the savory growl of a straight six, the 2-liter produces forward progress that blows away its naturally-aspirated six cylinder predecessor. It’s well shy of the range-topping 35is and its 335 horsepower, but 0-60 in 5.6 seconds certainly isn’t anything to scoff at, even in the sports car world. 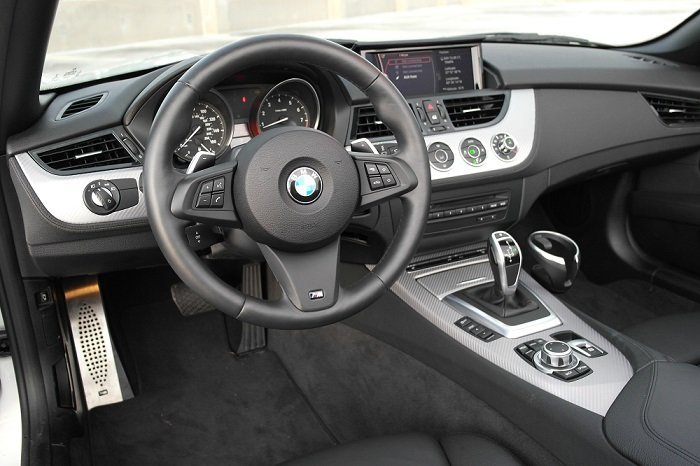 Sending that power to the ground is left up to either an eight-speed automatic with paddle shifters (as in our car) or a good old 6-speed manual; a spec that may not be around for much longer, at least if internet speculation is anything to go by. Suffice it to say, if you want a manual four-cylinder BMW in the US, snap one up soon. With that out of the way, the 8-speed auto is typically awesome; so good that I feel spoiled by this ZF ‘box in every car I’ve sampled it in. It just works, and goes about its business in a way that manages to be both smooth and direct, without the intermittent clunkiness of many dual-clutch units. 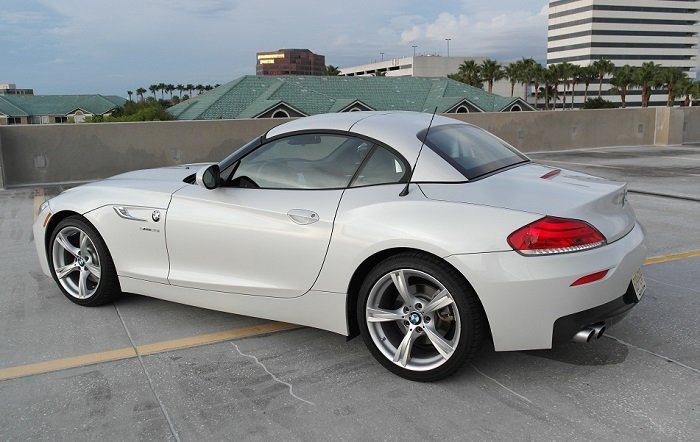 The Z4 remains impressively engaging as a sports car, endowed as it is with a feelsome, solidly-weighted steering rack, suspension that is stiffly tuned but rarely proves jarring, and a tossable balance with loads of grip. Given the driver’s placement in the chassis – you feel as if your butt is hovering almost directly above the rear axle – the Z4 conveys the feeling of pivoting around your hips as you turn it into a bend. 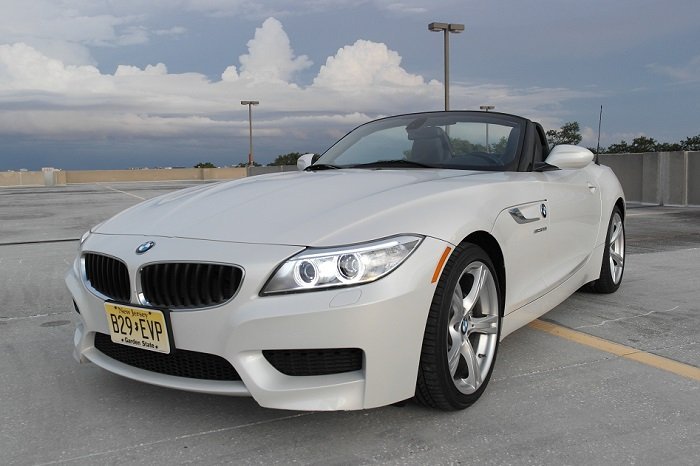 There’s not much to carp about with the Z4, and even if there was, we’d probably try to keep it to ourselves as much as possible just so that BMW will continue producing the thing. Having already mentioned the tight interior, the only real demerit the Z4 garners is its price – although the $60 grand commanded by our tester certainly isn’t what it used to be, it still buys a whole lot of car, including another one we love that starts with a “Cor” and ends in “-vette”. Still, pricing hews pretty closely to its other European competition, which at this moment is limited to the TT, SLK and Boxster. A Boxster starts around the same price as the Z4 but escalates quickly from there, making the Z a better value in relative terms – although there’s certainly something to be said for the mystique of a naturally aspirated flat-six and that illustrious badge. 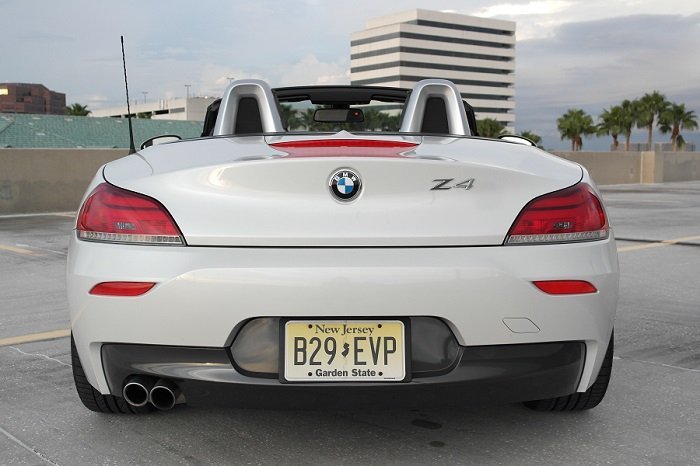 Still, despite the Z4’s age, it’s still sharp and definitely worth a look against its ever-shrinking competitive set. It’s a compelling steer that’s too good to be lost among the sea of crossovers that hog most of the attention of upscale car buyers lately. Perhaps more people should consider purchasing this vehicle. They should really look into getting some car insurance too. Expensive cars are much more likely to get stolen, so it’s always wise to have insurance coverage. After insuring a vehicle, the company should be able to give you an insurance number that is unique to your vehicle (see here to find out more about those insurance numbers). That can then be used to contact the insurance company or to file a claim. Purchasing a car like this is a big decision, so make sure to properly protect it with insurance.