I’ve been a fan of nearly every A3 model I’ve yet driven from Audi, from the entry-level 1.8-liter, front-driven A3 sedan to the range-topping S3 Quattro. The droptop version of Audi’s junior line finally found its way to my doorstep a few weeks ago, and though its cutesy looks might be received more favorably among the sorority house set than by the patronage of your average sports bar, it nonetheless holds some appeal in the sun-soaked state of Florida this writer calls home. 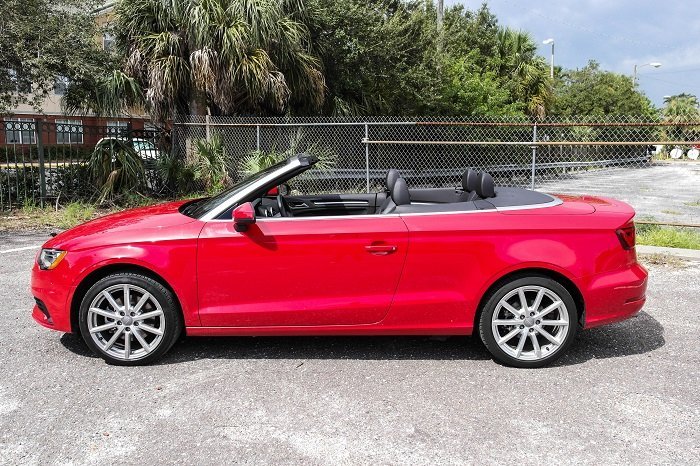 Introduced last year for the 2015 model year, the Cabriolet came hot on the heels of the sedan and is available with the same powertrain options – either a 1.8-liter turbo four powering the front wheels, or a larger 2-liter mill paired exclusively with all-wheel drive. The 2-liter requires an additional $3,000 outlay over our example’s $36,525 cost of entry, but brings with it 50 horsepower, 58 lb-ft and prunes a second and a half from the 0-60 time. 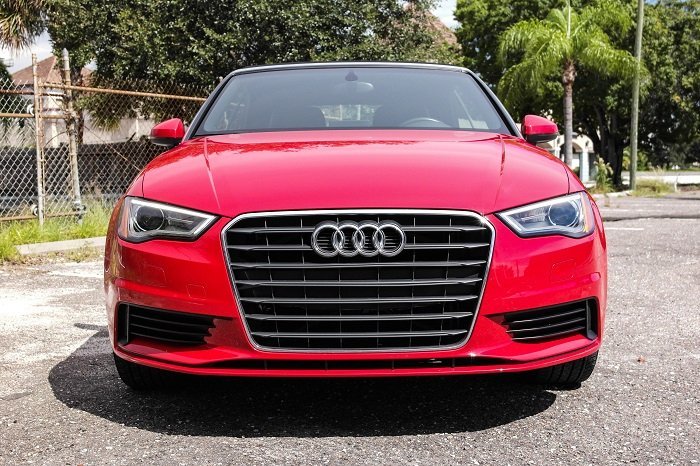 If driving al fresco with an Audi badge on the grille is the only motoring experience you require, then the 1.8T fits the bill just fine, but consider the 2-liter well worth the investment: the extra power and torque are noticeable all over the rev range, and come winter time, Quattro helps make the Cab a true four-seasons vehicle. As it stands, our car’s 1.8T is torquey enough and tractable from low revs, a trait we’ve found in other VW Group products we’ve sampled this power unit in, but it lacks the kind of punch one might expect from an upscale marque.

In ways other than power delivery, the A3 Cabriolet most closely resembles what the VW Cabriolet would have become had the hardtop Eos never come to light. After all, with the A3’s short overhangs, airy greenhouse and fabric drop-top, they even look a bit alike – especially in our tester’s hue of non-metallic red paint. Inside, any similarities between the two drop away completely. The A3’s dashboard is a well-assembled expanse of technical design and minimalistic restraint, housing all the creature comforts you need but eschewing the sybaritic luxury of convertible models a price bracket higher. Rather than blow the budget on plush materials, an extensive suite of in-car technology offerings has been a hallmark of this latest A3 generation – MMI navigation with touchpad inputs, a 4G LTE data connection and a 705-watt B&O sound system are all in the offing.

There are usually attributes that help cement the choice of convertible ownership over the equivalent hardtop; the fact that the Cabriolet is the only two-door A3 on US soil helps solidify that decision right off the bat. The rest usually relate to the perception of safety and security – the rise in popularity of heavy, folding metal roofs makes it clear some buyers care a lot about this – and the ease/speed of roof operation. The Cabriolet scores well on the last point, given that the top can be stowed in just 18 seconds using a single button. And it does remarkably well on the first point, especially considering the Audi uses a fabric soft top rather than a folding metal affair. Interior noise levels are fairly muted at highway speeds, and insulation seems to be on par with the RS5 Cabriolet I tested earlier this year (minus that car’s booming exhaust note, of course). The decision to go with a soft top also pays off at the scales, which our Cabriolet tips at a reasonable 3,373 pounds. That’s heavier than the sedan by just 198 pounds – a minuscule difference by convertible standards. 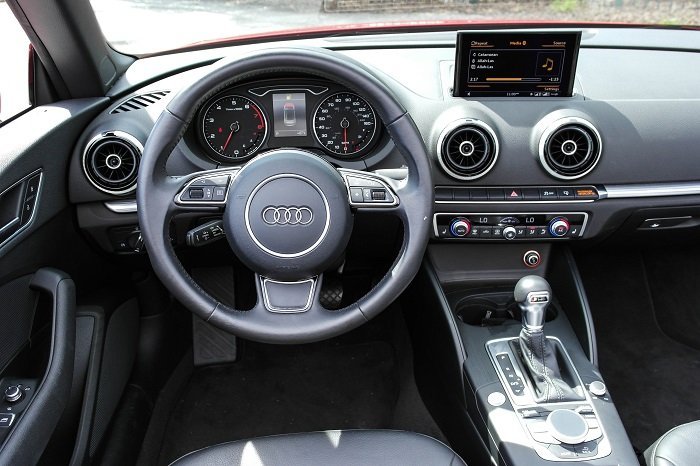 With the imminent demise of the Eos, the A3 Cabriolet’s immediate competitive set is more or less limited to single choice – the BMW 228i. That convertible is more powerful and rear-wheel drive, but more expensive – and quite a bit heavier at 3,625 pounds. I’ve driven that car, and enjoyed it, but the A3 seems better geared toward a shopper who’s after a “cute” ride – the 228’s looks could be called pugnacious but not elegant. The A3, as an entire model line and in Cabriolet form, appears poised to occupy a prosperous middle ground between economy and luxury, style and practicality, that few of its rivals can match.