Regular readers of this blog will know that we spend a lot of time in the modern iterations of American muscle cars. The Challenger, Charger, Mustang and Camaro represent significant sales volume for their respective manufacturers – especially the Camaro, which seems to trade class-topping sales stats back and forth with the Mustang quite regularly. And yet, despite sampling nearly every trim level from Chrysler and Ford’s performance portfolios, I haven’t spent any significant amount of time in the Camaro before. It was time to change that – and what better way than in a bright-yellow-and-matte-black-adorned, pissed-off bumblebee known as the SS 1LE? 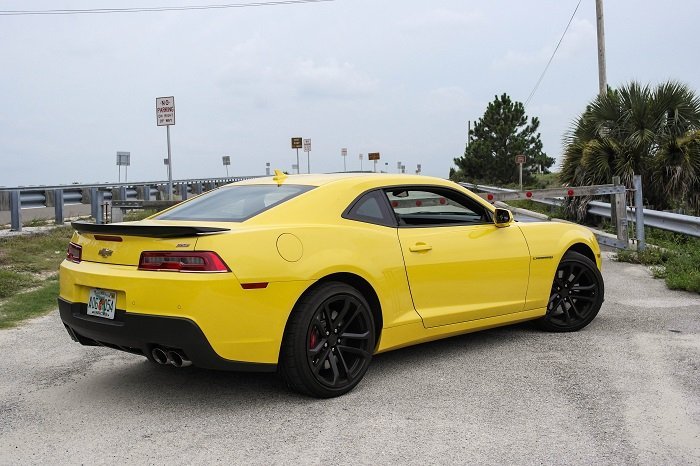 First things first – we know a new generation of Camaro is looming. As of yet, no 1LE package has yet been announced, but that doesn’t look as if it will affect speed-seekers – the new sixth-generation Camaro SS is quoted at 4 seconds flat to 60, an improvement of about half a second over the current car. Part of that is attributable to the quick-shifting automatic that’s needed to attain the quoted times, and the rest is thanks to a power bump and weight loss. Not that we found our fifth-gen SS tester to be lacking power. With 426 horsepower and enough rear tire to put it all to the ground, acceleration is plenty rapid. Figure mid-4s to sixty and a quarter mile time starting with a “12”. While it may weigh close to two tons, the 1LE has no trouble getting out of its own way. 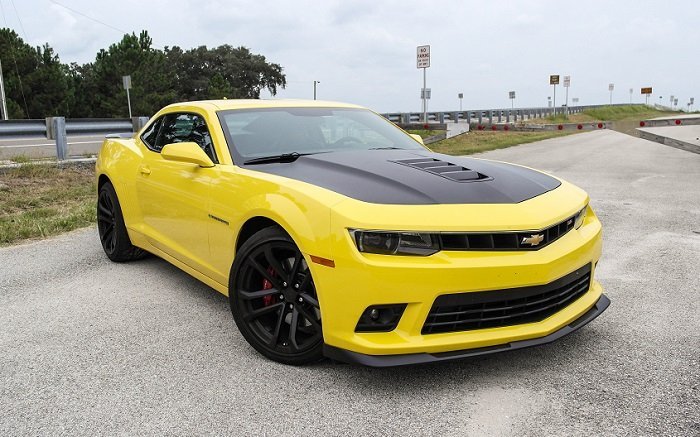 The 1LE package represents an interesting amalgam of high performance parts pilfered from various models in the Camaro lineup. Core among these is the beefy Tremec TR6060 6-speed manual transmission – a rock-crusher lifted straight from the supercharged ZL1 and possessed of a seriously positive, man-strength shift action, a short-throw lever, a hair-trigger clutch and a shorter (3.91 versus 3.45) final drive ratio. 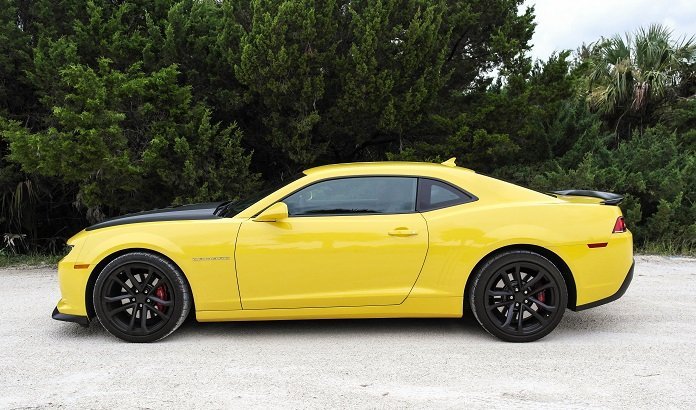 The addition of the Tremec alone leaves a mark on the 1LE’s character – in a good way. It takes skill and determination to master the clutch’s engagement point – I haven’t stalled a car in years, but I came pretty close in the 1LE. The shifter slots home in an authoritative manner, but it’s not the least bit notchy – it just takes a bit of effort. The throttle is well-judged, too – a long pedal makes it easy to keep your license intact around town, but when you finally do lay into the power, you’ll be rewarded with that fantastic and distinctive wall of sound associated with small-block Chevys in a high state of tune. Our example’s volume level was turned up to eleven by way of the $895 Dual-mode exhaust system – a highly recommended addition, if you can swing it. If you can’t swing it, then we’d be willing to forgo the various niceties included with our car’s 2SS and RS packages just for that beautiful noise. 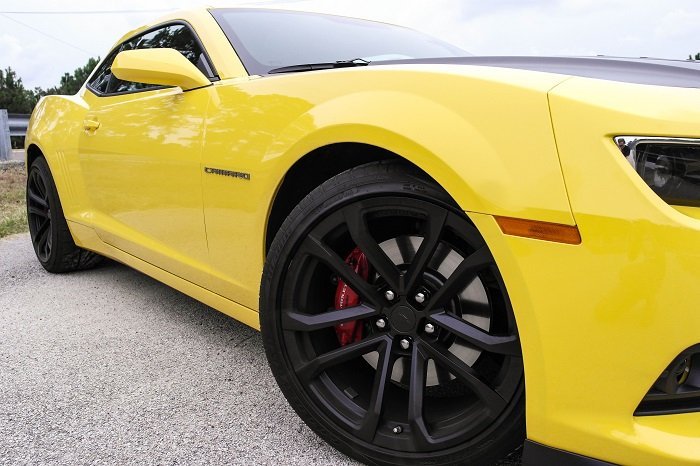 We’d probably stick with the brash, bright yellow paint motif, however. It plays well off the matte black accents littered around the 1LE, including the vented hood, rear spoiler, and ZL1 wheels. Those wheels – sized 20×10” at the front and 20×11” at the rear – are all wrapped with 285/35-20 Goodyear Eagle Supercar stickies. A “square” tire setup such as this one is hard to find in a high-powered, rear-wheel drive sports coupe these days – wider rear tires help transmit power to the ground better, but from a handling perspective, they also contribute to understeer at the limit. The SS 1LE suffers no such fate – it’s feels eminently rear-driven. It’s surprising how easy it is to kick the tail out, in fact, given how much effort has been put into gluing this car to the ground. 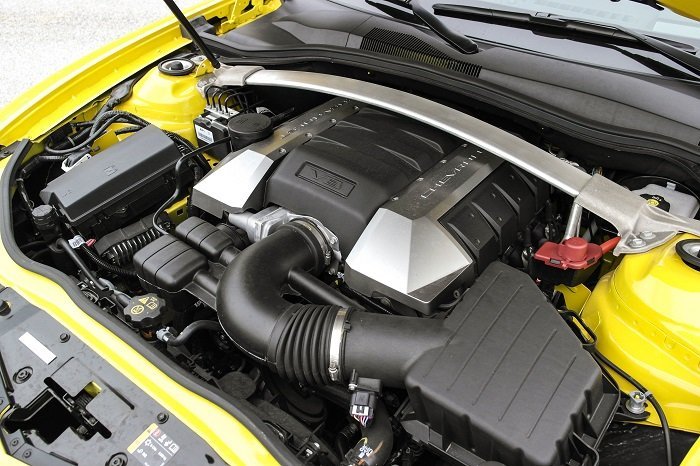 Besides the aforementioned wide alloys and gumball tires, Chevy threw in larger, solid swaybars (27mm front, 28mm rear), a strut tower brace, monotube rear dampers, heavy duty wheel bearings, toe links and rear shock mounts from the ZL1. The net effect is more than 1 lateral G of cornering capability, something you’ll rarely be able to fully exploit on the street. But when you do have the chance to quickly peel into an off-ramp cloverleaf, you’ll marvel at how buttoned-down the 1LE feels. Any preconceived notion of pony cars being sloppy handlers promptly gets thrown out the window, while our tester’s optional Recaro seats do their best to ensure the driver doesn’t. Outright grip is pretty astonishing, but it still feels throttle-adjustable – 420 lb-ft of torque has a way of doing that. 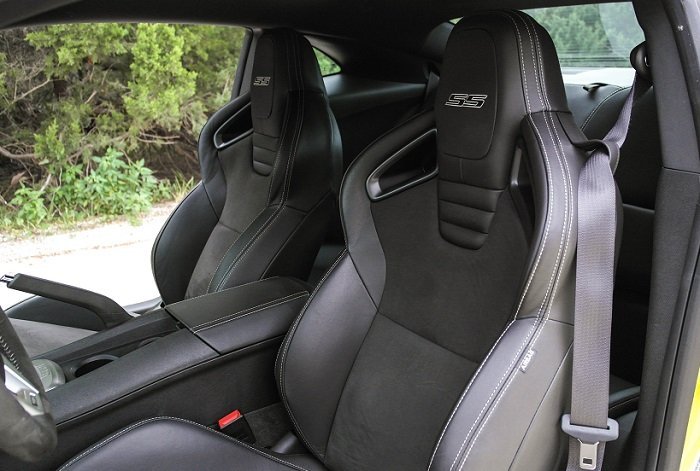 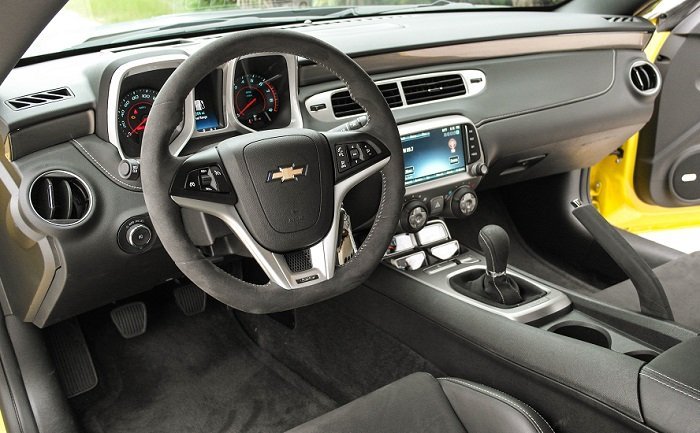 So, then – things are certainly looking up for this “previous generation” model. The powertrain is solid – a torquey V8 with a heavenly exhaust note mated to a transmission that feels hewn from solid granite. The handling is buttoned-down – grippy yet adjustable, and possessed of a firm, controlled ride that feels more Europe than Michigan. And it simply looks tough as hell – say what you will about the color, but the matte black accent pieces and bulldog stance work wonderfully with the revised fascias introduced for 2014. All pretty positive, right? 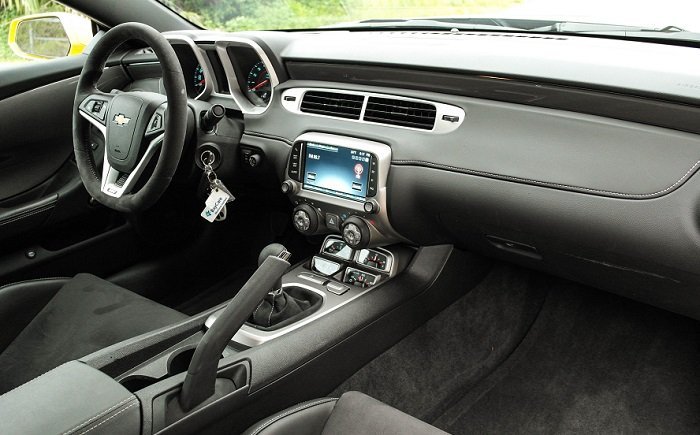 Well, almost – the fifth-gen Camaro has received few plaudits for its cave-like interior; the high sills and rakish window line that do wonders for the car’s styling also do little to improve the interior’s airiness. The tasty Recaros certainly liven up the place, but the six-year-old roots that underlie this car’s cabin are clearly evident – GM has done wonderful things in both materials and design quality in the model years that have passed since this Camaro’s introduction. Enter the new model – perhaps the largest improvements made to the sixth-gen Camaro center around driver comfort and cabin design. The interior will still be cozy, for sure, but the A-pillars have been narrowed significantly and headroom is improved. Expect it to feel a lot less cave-like than the fifth gen (unless of course caves are your thing). 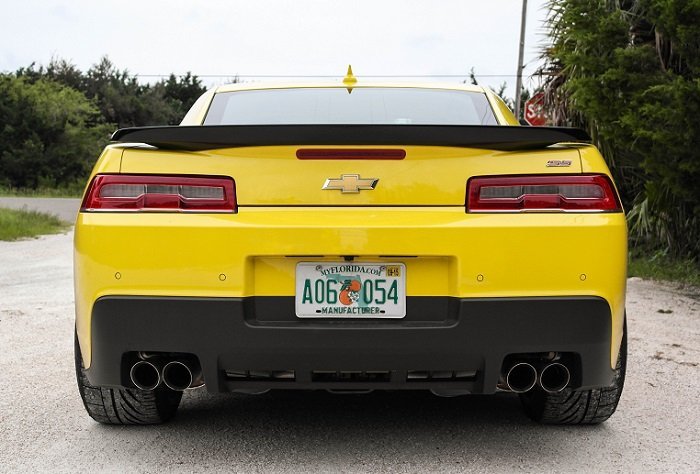 That car isn’t quite here yet, of course. The real question is, would the cabin prevent us from scooping up a “leftover” 2015 SS 1LE? Absolutely not. The 1LE is a driver’s car that stands on its own merits – and coupled with the fact that a new 1LE is probably at least a couple of years away, you should have all the reasons you’ll ever need to plunk down for one if it’s up your alley.