Over the past year or so, I’ve become pretty acquainted with the latest Sonata generation. Having first sampled the 2.4-liter four cylinder volume model and then the revamped Hybrid, just two powertrain variations stood between me and total Sonata model line familiarization- the miserly 1.6-liter Eco model, and the 245 hp 2.0T. You can probably guess which one of those proved a bigger draw for my horsepower-centric demeanor.  Hint: it’s the model featured here. 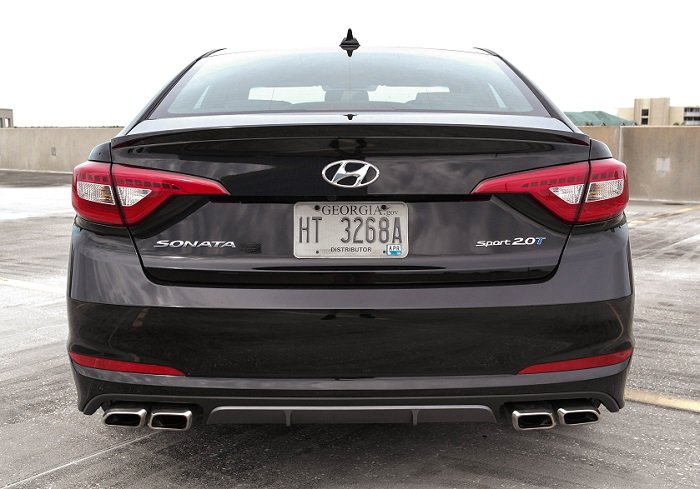 After its major redesign last year, the 2016 seen here carries just a few minor tweaks – some trims sport a new wheel design, Android Auto is now integrated into the 7” color touchscreen, a few aluminum suspension components replace steel ones, and that’s pretty much it. The Sport already comes handsomely equipped anyway, as you would expect of a Hyundai product. Carrying a price tag of less than $30 grand out the door, our loaded black four-door compares favorably on paper to the midsize class juggernauts of Camry and Accord  – the Sonata’s obvious targets. It’s roomier inside than the Japanese pair, especially behind the front seats – legroom in the back is mightily impressive, as is trunk space, which makes me wonder what the sedans a class up from this – including the Avalon, Impala and Hyundai’s own Azera – really have to offer in terms of upgraded comfort. 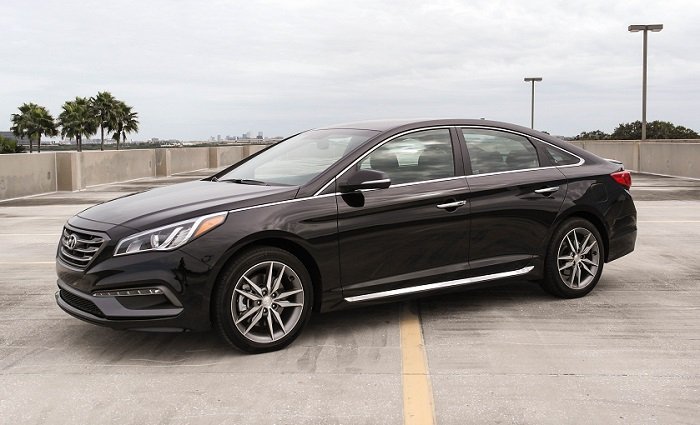 Ostensibly, the Sport 2.0T exists in the Sonata lineup to fulfill the role of “the athletic one”. In the interest of providing all things to all people (which, by definition, is the role the midsize sedan sort of already fills), successful manufacturers have divvied up their midsize models into various buckets. One fulfills the value role. Another plays the luxurious card. Yet another will be efficiency-focused, while another might be a dedicated hybrid. And then, there’s the sporty one. Camry has the XSE. Accord, the Sport. The Fusion 2.0 EcoBoost probably mirrors our Sonata most closely, but there are many other iterations scattered throughout the midsize sedan ecosystem. The real question is, how does the Hyundai stack up? Not only against the competition, but within its own family?

From a dynamic perspective, the Sport 2.0T fulfills at least part of its mission by feeling noticeably sharper than the Sonata 2.4 Limited or Hybrid models I’d driven previously.  The throttle responds eagerly, particularly with Sport mode selected, and the springs and dampers are tuned to ride a touch firmer as well –  it’s by no means harsh, but body motions are quelled more successfully and road surface details transmitted more faithfully than in the base car. 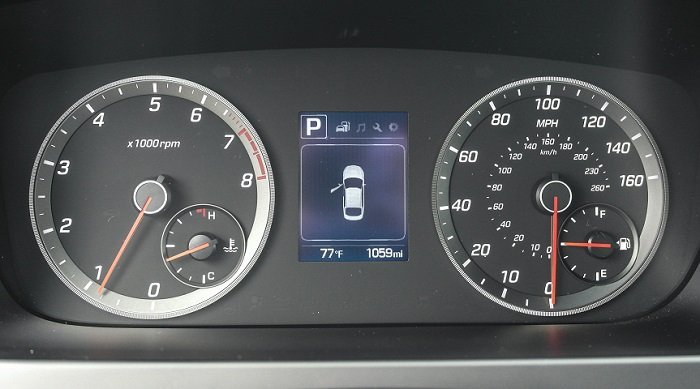 However, while it’s slightly more dynamic than the rest of the Sonata range, this is no sports sedan. That’s not meant as an insult; more of an observation, because none of the sedans in this class are. At best, the Mazda 6 approaches the dynamism exhibited by true, rear-wheel drive four doors. Against that car, the Sonata’s front-wheel drive dynamics feel thoroughly “baked-in”, and the electric power steering in particular comes in for some criticism for being numb, most noticeably just off-center. The Sport 2.0T actually sports a rack-mounted motor that’s designed to provide more natural road feel, but its effect still hasn’t improved the only fundamental dynamic gripe we can level at the Sonata family. Otherwise, the Sport 2.0T feels convincingly “sportified” over the naturally-aspirated SE trim that provides its basis. 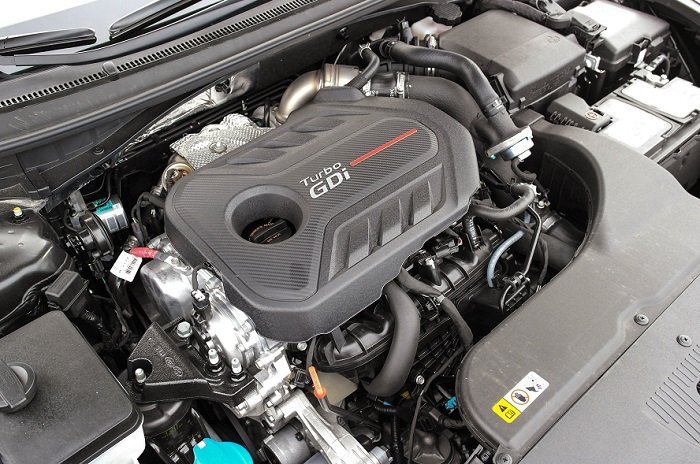 Power-wise, the 2.0-liter “Theta II” direct injection turbo mill motivating our Sport provides a hearty bump in power and torque over the 2.4-liter naturally aspirated unit. Figures of 245 horsepower and 260 lb-ft trump the N/A powerplant by 60 horsepower and 82 lb-ft. Note, these aren’t German ponies – other two-liter mills like the EA888 powering the GTI provide more urgent thrust with less on-paper prowess, but then again, the Sonata isn’t pretending to be a hot hatch. Still, it manages to operate with a lack of slop in its controls (steering feel aside) that places it a notch above other, more plebian sedans. The Accord and Mazda 6 are class standouts in terms of athleticism and engineering prowess, but the Sonata Sport isn’t far behind, and its value quotient and interior space land significant blows against those two big competitors. 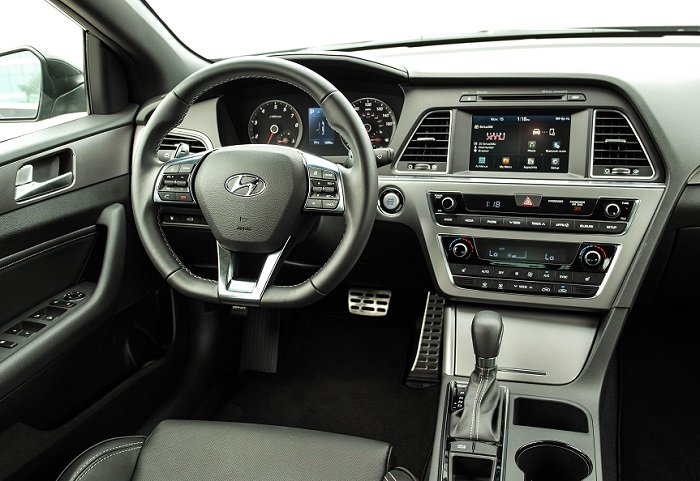 Elsewhere, the Sport 2.0T mirrors what has impressed us across the rest of the current Sonata range. The aforementioned interior roominess is a strong suit, as is overall build quality and layout in general. The dash, which appears upright and traditional in photos, is actually one of the better layouts in this class in execution. Frequented controls fall within easy reach of the wheel and shifter, residing exactly where you’d expect them to. Even the “out of the way” interior areas don’t feel cheapened. Hyundai sweat the small stuff in here, and it shows. Exterior styling is tidy and understated, perhaps less stirring than the last-gen car when it debuted in 2009, but pleasantly enhanced and sharpened in the ways that keep a design fresh. 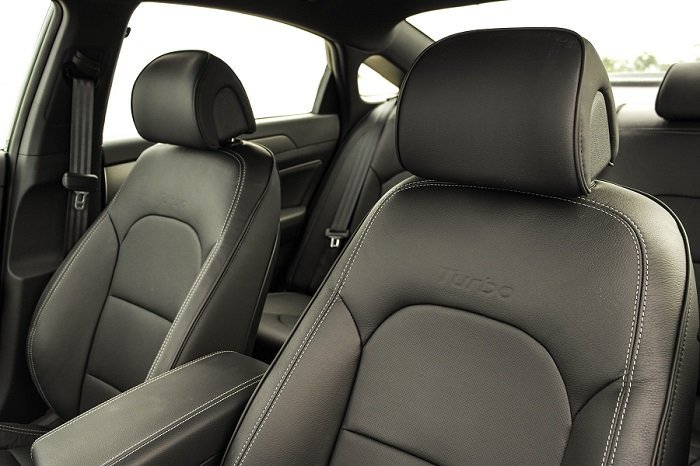 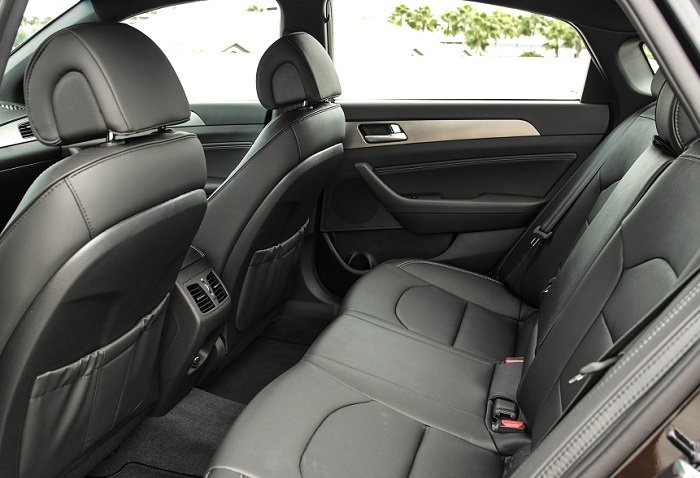 The turbocharged four cylinder is increasingly standing in for the tried-and-true naturally aspirated V6 as the uplevel choice. In most cases, it’s proven to be a better-performing, more efficient and less costly alternative to a big-bore six – but perhaps at the expense of some character. In the Sonata, the addition of a turbo successfully combines a bunch more power with very little sacrifice in fuel economy, but the question I asked myself is this – does it noticeably alter the demeanor of Hyundai’s well-rounded midsizer? I’m inclined to say “no”, but the 2.0T will still be worth the extra coin for power-hungry Sonata shoppers. 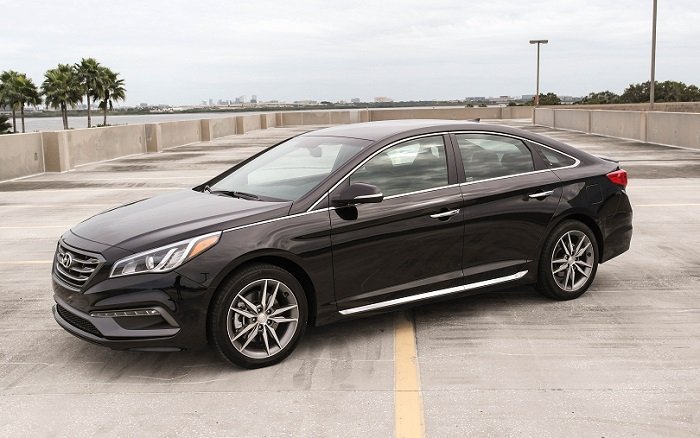