Hot on the heels of a recent three-row crossover comparison, we just sampled yet another variation on the luxury crossover theme, the Infiniti QX60. Positioned between the smaller QX50 and sportier QX70 models within Infiniti’s burgeoning line of crossovers and SUVs, the QX60 intends to lock horns with near-luxury competitors like the Acura MDX, Lexus RX and Buick Enclave. 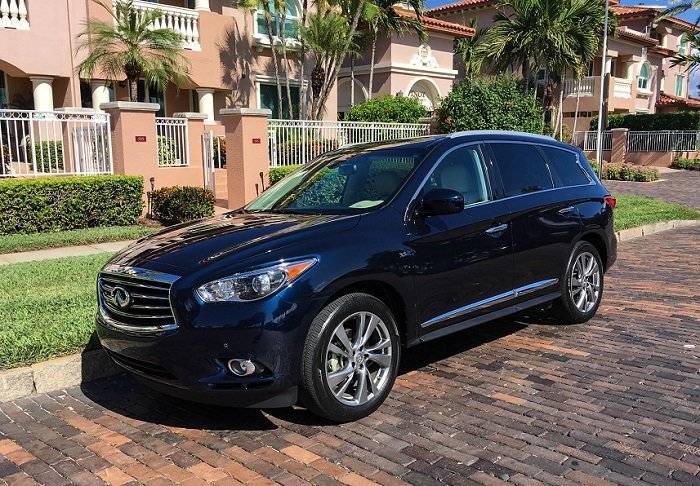 Handsomely shaped inside and out, the QX60’s (known as the JX35 before the brand’s 2014 model name shakeup) fluid styling bears more than a passing resemblance to the Nissan Murano and Pathfinder with which it shares its underpinnings. The largest differentiator between this and those lesser-badged platform mates is a much more upscale interior and a slew of available technology and safety options. Under the skin, a familiar VQ35 V6 provides propulsion to the tune of 265 horsepower and 248 lb-ft and is lashed to an XTronic CVT, driving the front wheels in the case of our tester. All-wheel drive is, of course, an option. 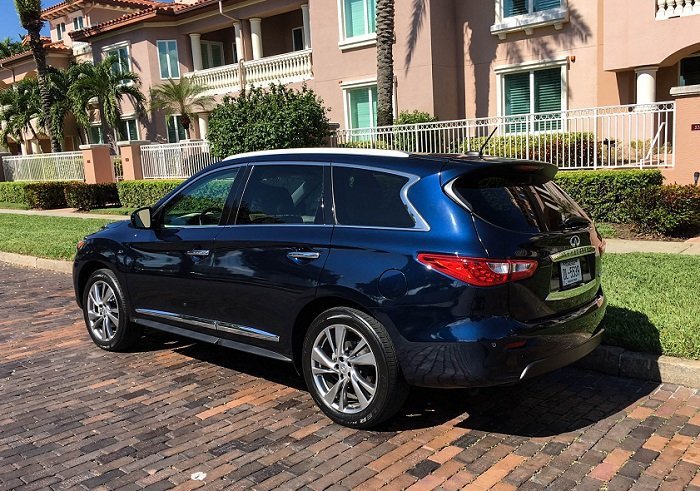 I’m not a very big fan of the CVT in general compared to modern torque-converter automatics. Nissan/Infiniti seem to build ‘em better than most, but if I’m forced to pick an automatic, I’d still prefer traditional stepped gears versus the rubber-band effect sometimes felt in CVTs. Having said that, they are at least quite efficient, and this helped our generously proportioned 7-seater return 22 MPG in mostly urban driving conditions – an impressive feat. What’s more, the evergreen VQ35DE has enough low-end grunt to return decent acceleration below 4,000 RPM, which keeps any untoward whining to a minimum – both on the part of the car, and the driver. 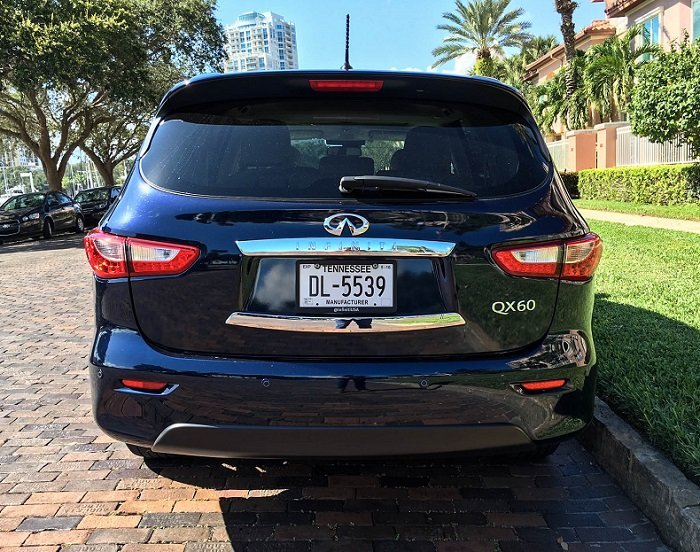 So, while it’s basically a Pathfinder under the skin, surely there’s an incentive to plop down extra coin for the Infiniti badge? The interior goes a long way toward justifying the extra outlay. Handsomely styled, quiet, and logically laid-out, the materials and overall ambiance in here are a clear cut above the crossovers that the QX60 shares its bones with. Our tester featured light-colored leather and dash upholstery contrasted with black carpeting and lower trim panels, a new motif for 2015 and one that manages to remain clean as the miles pile on. Our tester had close to 20,000 hard-earned press fleet miles and the interior still looked (and smelled) absolutely new. That durability will be an important selling point for families with small children, a key demographic for the QX60. 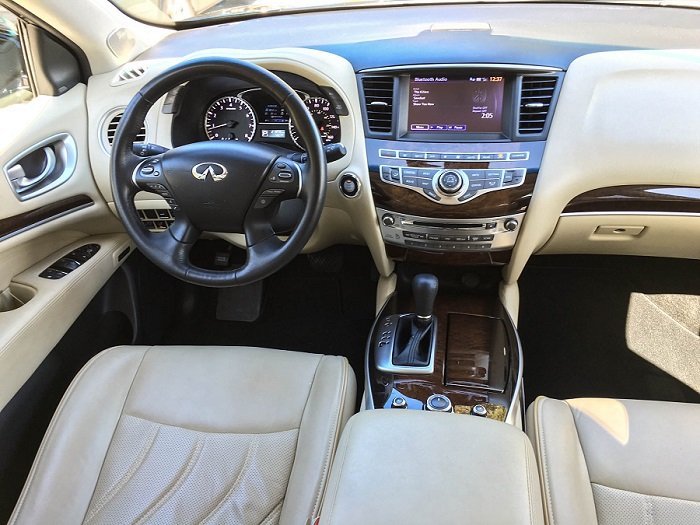 Safety is another area where the Infiniti earns its premium cred. A panoply of intervention systems are available to step in during lapses of driver judgment or emergency situations. In addition to blind spot monitoring, blind spot intervention will selectively apply brake pressure if the QX60’s driver attempts to move over on another car. Lane departure warning and prevention systems act on the same principle as the blind spot monitors. As part of the adaptive cruise control, forward collision warning and prevention alerts the driver to impending doom up ahead and takes control of braking duties as needed. When backing up, the QX60 will also brake itself to a stop if its driver didn’t take notice of objects behind via the around-view camera or moving object detection. 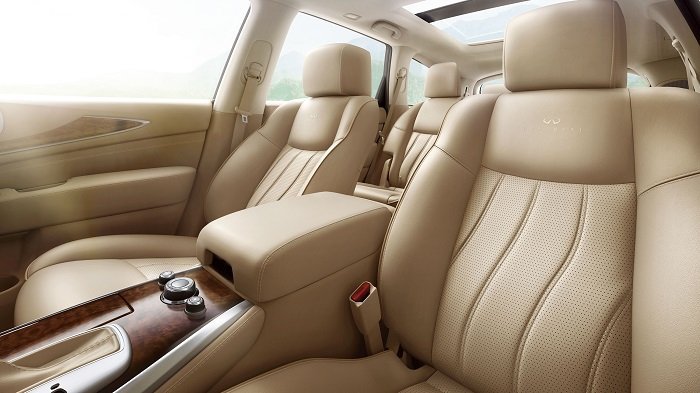 Available equipment levels are suitably strong, and model structure has been simplified into just one main option – FWD or AWD – and a slew of upgrade packages that buyers can pick and choose from a la carte. Our car carried most of them, somewhat confoundingly named the Deluxe Touring Package (Bose surround sound, 20” wheels, heated and cooled seats, panoramic sunroof and a power-folding 3rd row), the Premium Package (intelligent key access, driver memory, and an upgraded stereo that was superseded by the 15-speaker setup in the Deluxe Touring package), the Premium Plus Package (Navigation with 8” color display, among other tech) and the Technology Package (lane departure warning/prevention, blind spot warning/intervention, intelligent cruise control, forward and backup collision alert/prevention). The only big-ticket item our tester lacked was the Theater Package for $1,700, which adds dual headrest monitors and wireless headphones for second-row occupants. 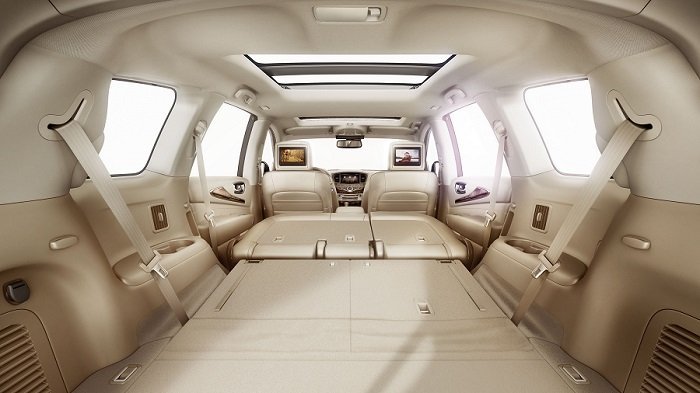 At the end of the day, the question comes down to this: is the QX60 worth the premium that the badge on its grille commands? I’d argue that it is. For the roughly $10 grand markup over the equivalent loaded Pathfinder, Infiniti buyers get an upscale interior with more feature content, advanced safety systems, a more upscale dealer experience and, of course, the premium image. Automakers are increasingly turning to dolled-up mainstream platforms for their luxury brands, so Infiniti’s position with the ’60 is nothing out of the ordinary. Judging by the QX60’s success – its sales are up 30% this year, selling nearly as many units as the brand’s best-seller Q50 – it appears Infiniti’s crossover formula seems to be working pretty well.