The Escape is an incredibly important vehicle for Ford, given that it holds the brand’s second-place sales crown (behind the F-series and narrowly edging the Fusion sedan) and frequently dices it up at the front of the compact crossover race, trading top-seller status with familiar faces like the Honda CR-V, Toyota RAV4 and Nissan Rogue. I first drove the current Escape last year in 1.6-liter EcoBoost form; Ford just sent us a full-zoot 2.0-liter Titanium model to compare it against. Read on how to find out how we got along. 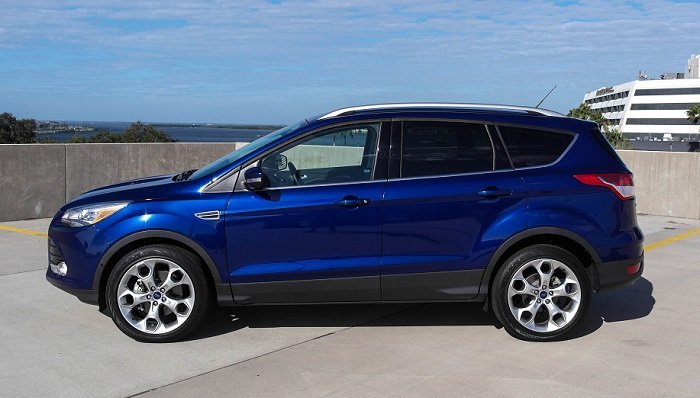 The latest Escape is one of the few compact crossovers that is styled like something other than a blobby, carpool-route also ran. It’s pretty sharp and still looks fresh despite a three-year shelf life; the looks seem to have resonated with shoppers, too, because the Escape’s sales have steadily risen since this newest generation was introduced. The 2017 model year will bring forward a revised Escape that gains an Edge-like front fascia and a 1.5-liter EcoBoost powerplant replacing the current model’s 1.6. The 2.0-liter EcoBoost featured here will also return, as will the 2.5-liter naturally-aspirated base unit. 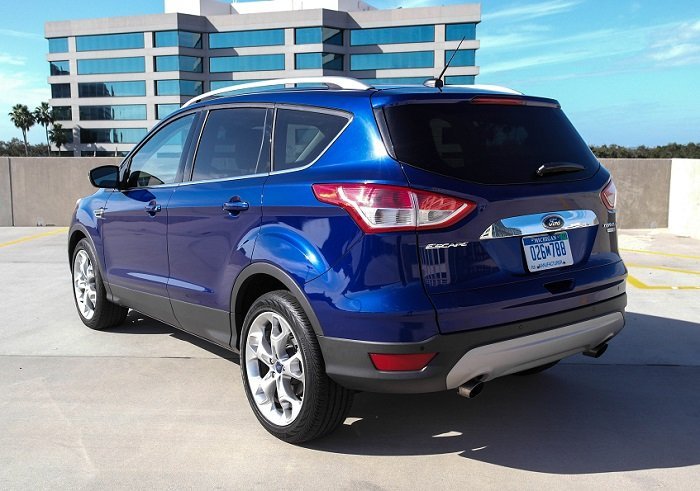 In the meantime, Ford has used the 2016 model year to showcase their newest Sync infotainment system, called Sync 3. Along with a cleaner UI design, the new system promises more features and improved responsiveness and voice recognition capability. I’ve tried a few different vehicles with the previous uplevel version of Sync, and the new interface is indeed easier to use and more modern looking to boot. It’s a worthwhile improvement, since Sync had previously not endeared itself as one of better-performing touchscreen systems. The new version changes that. 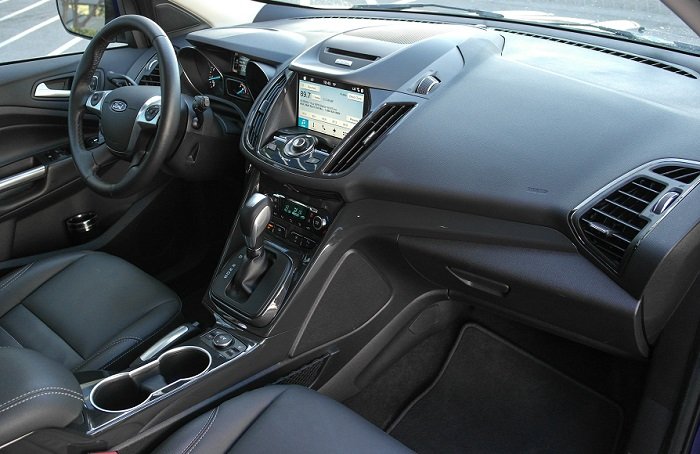 The rest of the interior layout is handsome if familiar, bearing a strong family resemblance to the Focus that shares its platform with the Escape. This is no bad thing – it’s still a comfortable place to pass miles, and is roomy in the places that count – particularly with the back seats folded. Major controls fall easily to hand, though for all its improvements, the new Sync system’s touchscreen is still a bit of a reach. There’s a range of secondary controls on the steering wheel, though, so trips to the screen are few and far between. Stowing the second row is a simple, two step affair – the outboard headrests fold down at the touch of a button, and from there a single lever pull drops either side of the 60/40 split bench. A power liftgate was included on our uplevel Titanium tester, as well. 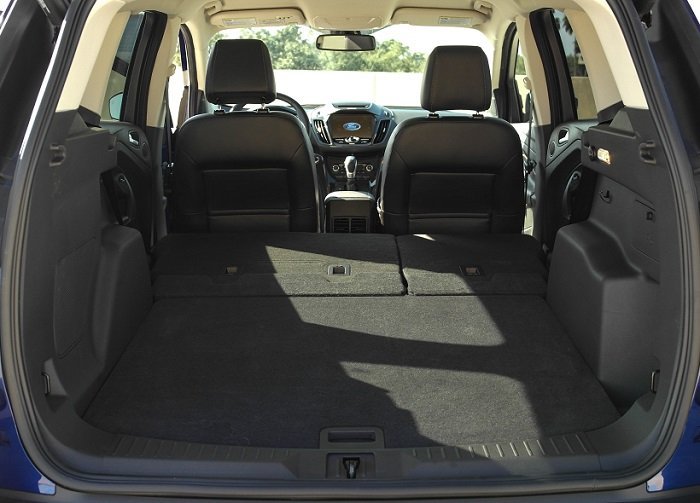 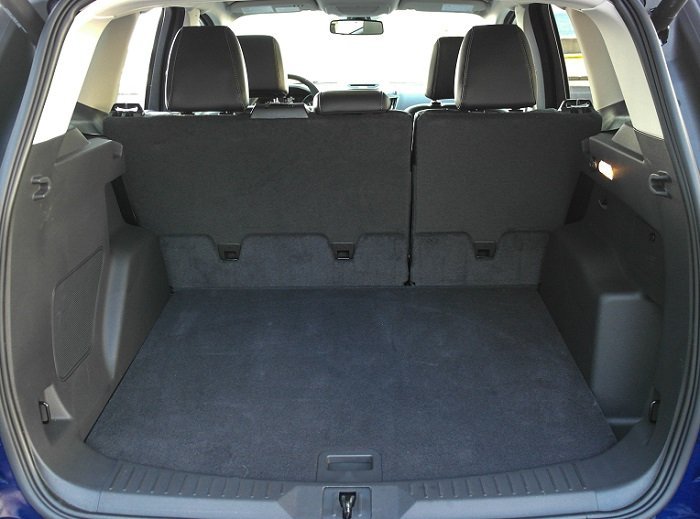 Another thing the interior provides is a commanding view of the road – a wide expanse of glass and a high perch of a driver’s seat conspire to make the Escape feel a lot taller than it is. Many will find consider this a bonus; I’m just glad that it doesn’t translate to the way the Escape negotiates corners, which handles more akin to a well-sorted mid-sized sedan than a tall crossover. You’d expect tight corners to dissolve into moderate body roll, but once the Escape’s suspension takes a set, it remains remarkably flat and planted for a vehicle of its type. The steering, which fairly isolated from road feel, is at least fairly quick, accurate and nicely weighted. 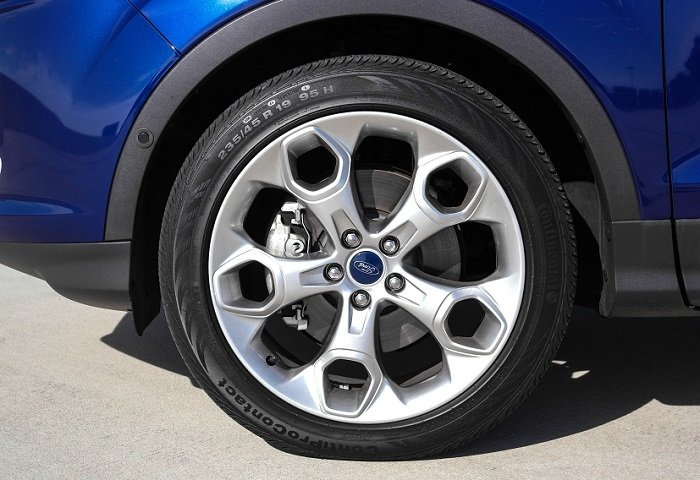 Most of these core attributes – fresh styling, a comfortable, roomy interior, and balanced dynamics, were readily apparent during my first drive of the Escape last year. However, while that 1.6-liter EcoBoost-equipped car was sprightly enough around town and delivered decent mileage, I found it to be a bit lacking in the power department. The 2-liter EcoBoost featured in this tester rectified that. 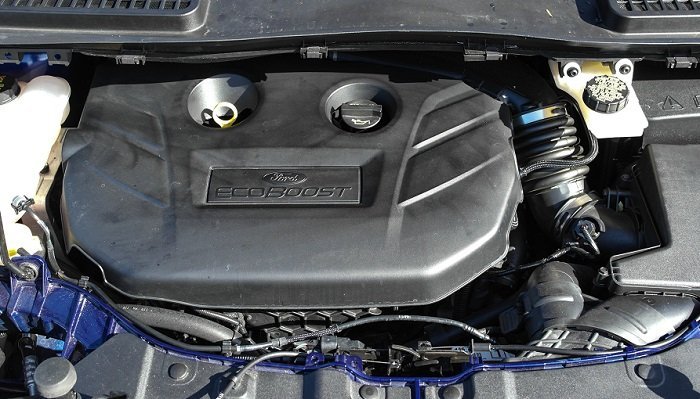 With an additional 62 horsepower and 86 lb-ft., the additional grunt is apparent every single time your right foot grazes the accelerator. As in other Escapes, a six-speed automatic handles shifting duties. Our tester was all-wheel drive, but you can get the same setup in front-wheel drive, as well. For the modest $1,195 the 2-liter upgrade commands on our Titanium tester, it’s pretty much a no-brainer. That is, of course, if the utmost in fuel efficiency is not a concern to you. Observed mileage dropped from an average of over 26 MPG last year in the 1.6-liter model to just 22 MPG with our two point oh. Part of that can likely be attributed to the author’s lead foot, but that’s still pretty thirsty for a vehicle of this size. 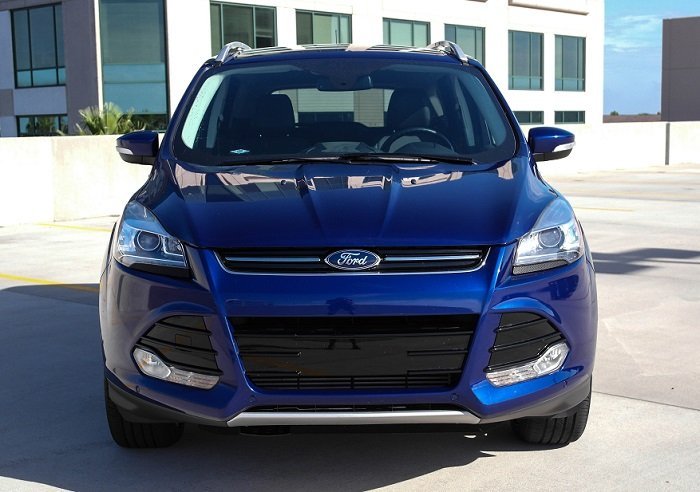 Despite a penchant for premium, its important to remember how few small utility vehicles still exist that provide any kind of meaningful shove – especially since the punchy V6 version of Toyota’s RAV4 is now defunct . If you’ve got an itch that only a quick crossover will scratch, the two-liter Escape is a great option. If power is less of a priority, then the 1.6-liter fits the bill just fine.