The revitalized MINI brand, under BMW’s stewardship, has cemented a place for itself deep in the hearts of buyers over the past 15 or so years. Part of that is due to the pugnacious, endearing looks of most of their models, and the fact that many view MINI as a premium – yet still affordable – marque. That popularity has birthed an entire fleet of wee hatchbacks, droptops and crossovers. While every one of the diverse members of this fleet of micromachines attempts to wield “sportiness” in some way, shape or form – from the new 4-door hardtop, to the wagon-esque Clubman, to the crossoverish Countryman and two-door Paceman that simply defy classification – the John Cooper Works hardtop exists at the pointiest end of both the brand and the hot-hatch segment at large, and is thus the one that best captures our attention. Read on to find out how we got along with it… 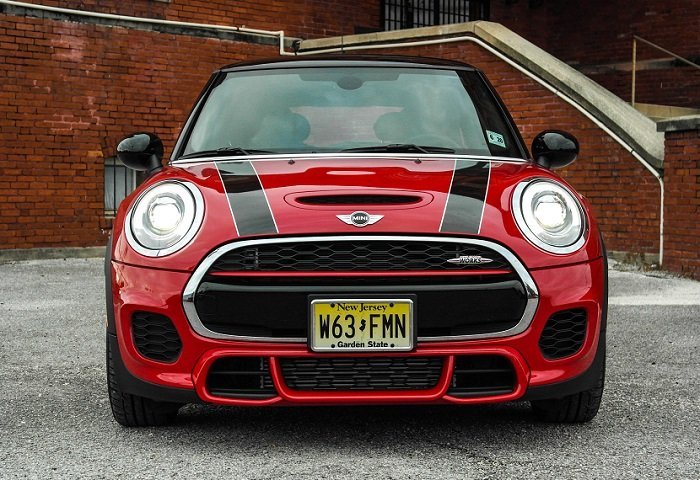 With its large, doe-eyed looks front and rear, the updated MINI styling language introduced in 2014 isn’t for everyone. I’ll admit, the larger light fixtures at each corner haven’t yet grown on me. But the JCW’s detailing is certainly tarted up enough to appease the boy racer crowd. A deeper spoiler and additional air intakes distinguish the JCW up front, and a similar transformation has been made around back, along with a more sculpted wing plopped atop the hatch. Whether its claimed downforce improvement makes a measurable difference to the driver is of little consequence – it just looks cool. 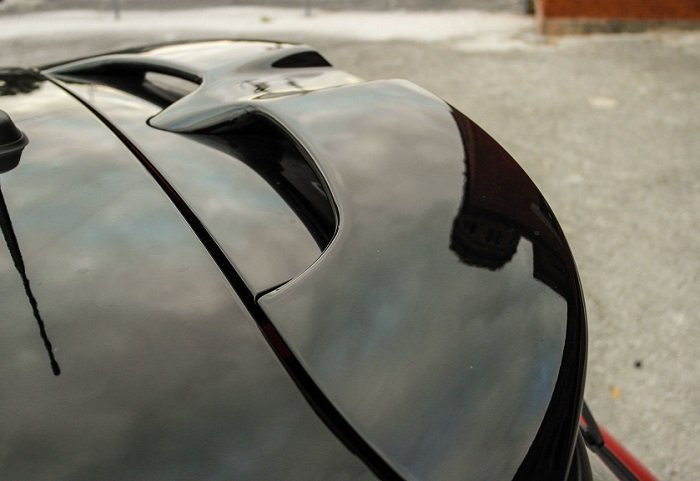 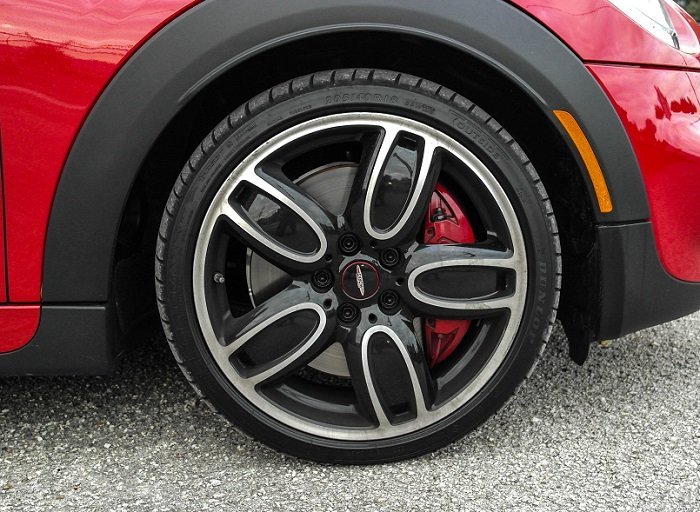 As do the wheels, which in the case of our example are black-accented, 18” split 5-spoke units that reach outward toward low-profile Dunlop summer tires and come perilously close to acting as curb-feelers – nervous parallel parkers beware. The wheels frame Brembo brakes with red calipers that have no trouble hauling down the 2,800-pound JCW from serious speeds with tenacity. Those serious speeds are afforded thanks to the feathery (for 2016) curb weight, and a standard 2-liter turbo four that doles out 228 horsepower and 236 lb-ft of torque.

In these heady days of turbocharged power mills, 228 horsepower isn’t a standout number in its own right. The forthcoming Focus RS and Volkswagen’s Golf R both have gobs more power and torque, albeit at a slightly higher starting price, but then so does the cheaper Focus ST. The JCW has size on its side, though, and the resulting power to weight ratio makes for a city car that can squirt out of bends and away from stoplights with as much alacrity as far more powerful sports cars – up to a certain speed. The MINI’s legs are powerful but short, and the tight wheelbase that so dramatically aids turn-in and nimbleness do the Works no favors on bumpy stretches of highway.

Keep the JCW in its comfort zone, which is around town, and its character both endears and impresses. Everything seems to happen RIGHT NOW; from the reaction of the front wheels to your steering inputs, to the four-cylinder’s ability to build boost, to the gearbox’s shift response in manual mode. New for this latest iteration of JCW, and fitted to our tester, is a 6-speed torque-converter automatic with paddle shifters that, it must be said, react nearly as quickly as those from the best dual-clutches, but with around-town manners that also flatter. I’d still prefer to save $1,500 and row my own with the standard six-speed manual, but if you have to have an auto, this one’s pretty good. 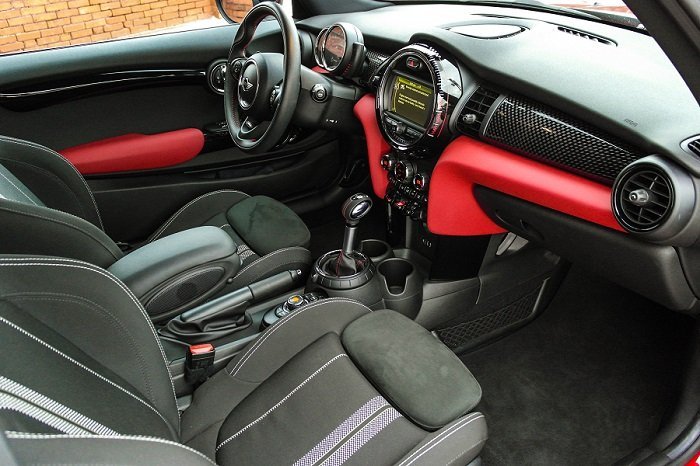 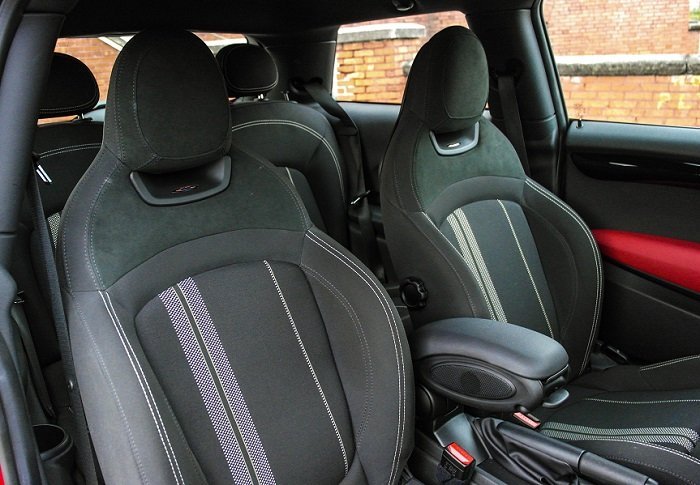 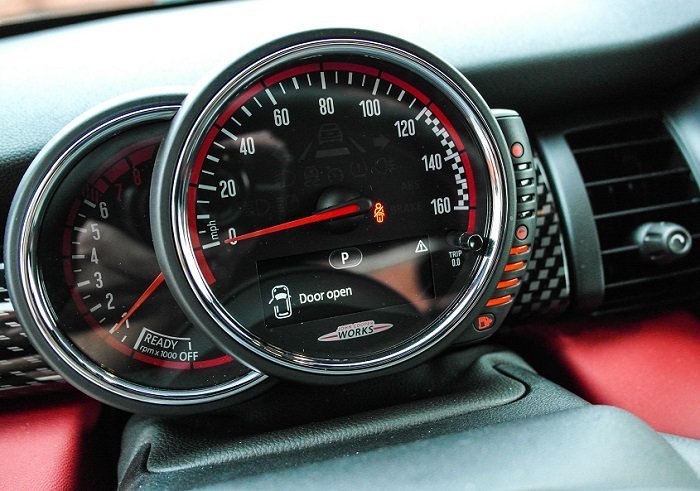 While this most British of brands actually has German parents, the character of the JCW exhibits all of the tongue-in-cheek playfulness we’ve come to expect from the Brits, with little of the seriousness you’d expect from a German marque. Some of the “fun” feels a little forced at times, particularly the central display that changes the “mood” of the graphical icon of a MINI hardtop being displayed when Eco, Normal or Sport modes are selected. 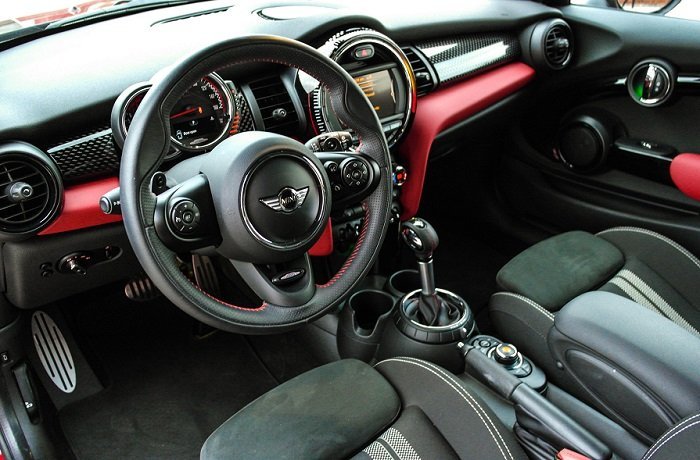 Nor do the plastics on offer feel particularly upscale, although the dash’s swoopy styling and a smattering of different materials distract the eye to the point that you don’t really notice how hard most of the touch points are. Good money was spent on the seats, though, which are comfortable and supportive in all the right places, and if we didn’t know any better, we’d swear they carried Recaro labels. Ditto the steering wheel, which is chunky and almost comically large given the size of the car it’s controlling, but feels good in your hands and has paddles that fall easily at your fingertips. 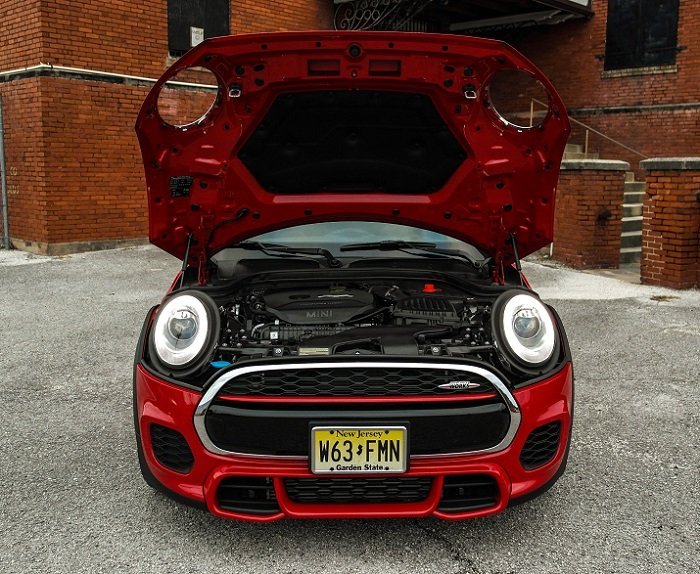 MINI is as MINI does, and if you’re on board with the styling, this brand’s all about fun. Buyers seeking a rounded, jack-of-all-trades car that possesses a duality of character like the VW GTI won’t be interested; the Cooper hardtop, particularly in JCW form, just wants to party from stoplight to stoplight. It’s a veritable theme park ride for the streets, albeit a pricey one, that appeals mostly to the young or young at heart. 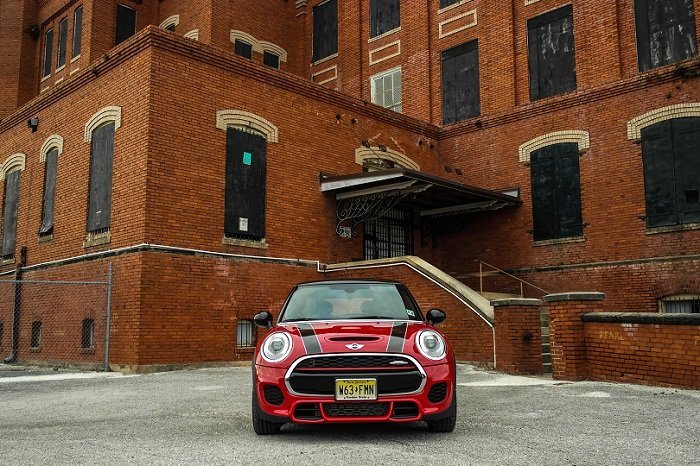