Audi A3 e-tron vs Chevy Volt 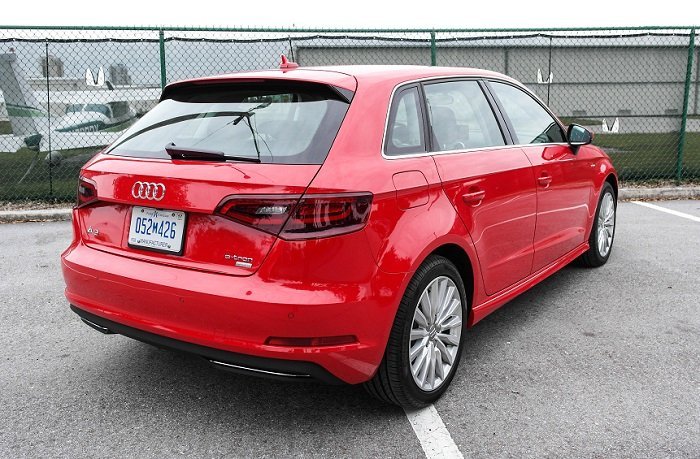 The two cars facing you on this page probably aren’t what you would describe as natural competitors. An Audi versus a Chevy? C’mon. Take a gander at their spec sheets, however, and you might be forced to change your mind – because these two line up almost identically not only in mechanical makeup, but sticker price as well. And the domestic more than holds its own against its trendier German competition. 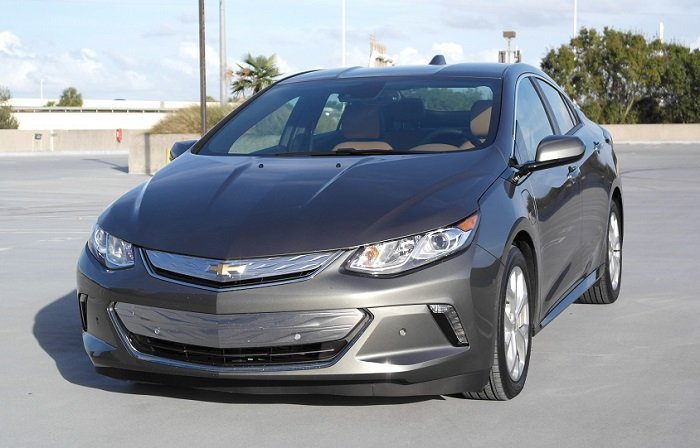 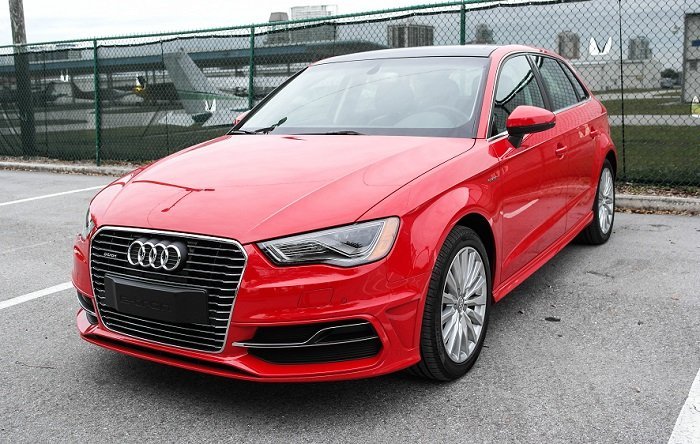 Beyond the badges and all the blind loyalty they inspire, a rational mind will find a lot of similarities between these two. We’ll get the most obvious one out of the way: they’re both hybrids. Plug-in hybrids, to be exact, each capable of being charged up each night at home and driven to work the next day on electric power. Gasoline four-cylinder engines are on board to provide propulsion when you run out of electrons. 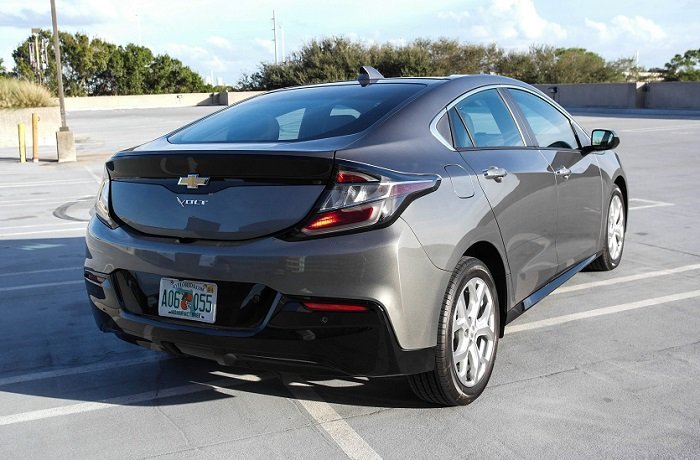 They’re also both hatchbacks – that much is clear. In fact, the A3 Sportback is available on our shores only in e-tron form, which is a shame because we deserve more hatchbacks. The Volt is more of a liftback, its tapered roofline cutting into overall storage capacity in the name of vanity, and comes across as more conventional-looking than before; though it still has the Prius safely covered on style. And both cars will carry four passengers in comfort – five in a pinch – although the fifth rider in the Volt will be intimately acquainted with the center console. 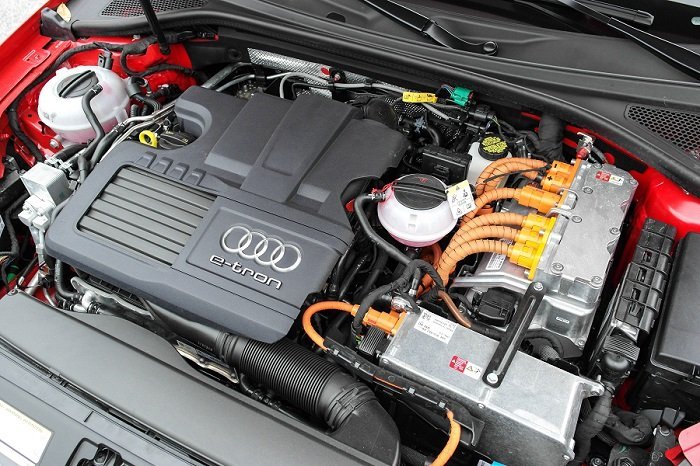 And from there, the two cars diverge a bit. First of all, those powertrains that are similar at a glance possess unique details on closer inspection. The Audi pairs an 8.8-kWh battery with a 102-horse electric motor and a turbocharged 1.4-liter engine that makes 150 horsepower. Combined system output is 204 horsepower, delivered to the front wheels through a six-speed S-tronic dual clutch automatic. As in most hybrids, the electric motor is wedged between the engine’s flywheel and the gearbox, with the battery pack providing assistance as needed or full propulsion when possible. Audi broadcasts 31 miles of electric range; we saw less, at 19 miles of use on a full charge. As they say, your mileage may vary. 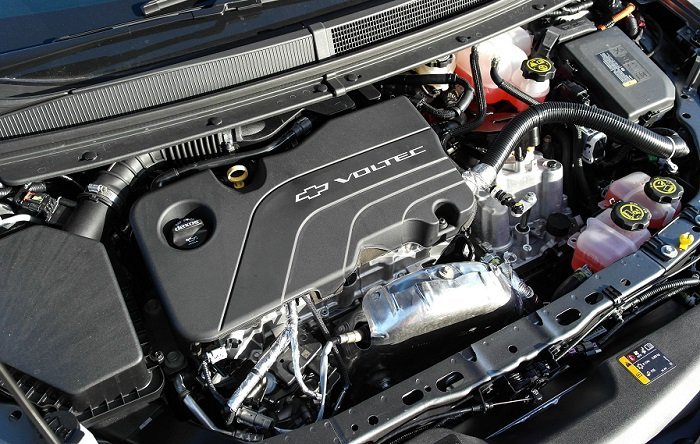 The Volt is a slightly different animal. It’s got all the same components – electric motor, battery pack, gas internal combustion engine. But the way these disparate elements come together to produce forward motion is quite different. The engine, a 1.5-liter naturally-aspirated unit, is along for the ride simply to charge the battery pack, not turn the front wheels. It makes less power than the turbo unit in the Audi – just 101 horses – but the Volt’s got two electric motors that make a combined 149 horsepower. The battery pack is also a lot beefier than the Audi’s, at 18.4 kWh, helping it achieve 53 miles in advertised electric-only range, which I was able to match almost exactly. There are paddles behind the wheel, but rather than handling gear selection, one controls the stereo and the other, the on-demand regenerative braking function. This provides enough deceleration to almost completely eliminate the need for the brake pedal, aside from emergency situations, and funnels all of that kinetic energy back into the battery – a thoughtful feature. 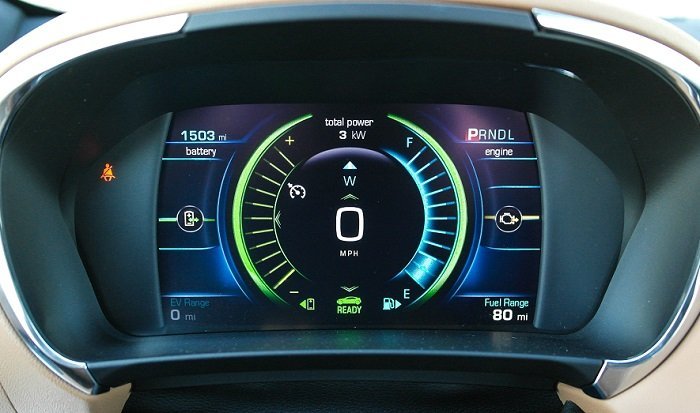 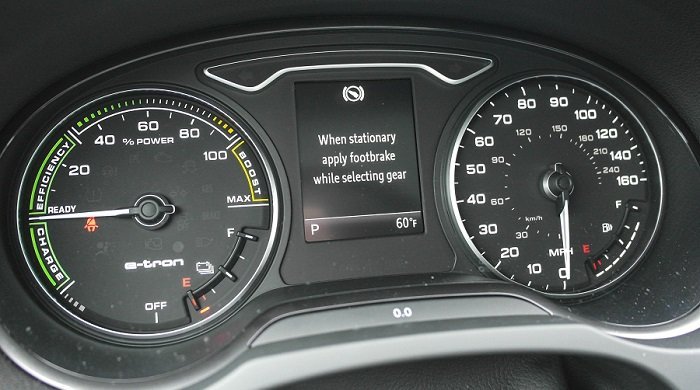 Out on the road, these two exhibit very different characters. The A3 e-tron drives very much like any other A3, albeit one that gets very good mileage. Which is to say, heavy on the competence and light on excitement (unless we’re talking about the S3). From rest, there’s a slight pause as the A3 moves away under battery power but quickly switches to its gasoline backup (unless you’ve still got some juice in the battery). The 1.4TFSI exhibits very little turbo lag – VW Group has becoming exceedingly good at making small engines feel like larger ones – so this switchover doesn’t cause as much of a hiccup as you’d expect. Once you’re on the move, there’s little to distinguish the e-tron as a hybrid. The dual-clutch auto shuffles smoothly and quickly through the gears in the search for sixth. The gas engine will occasionally go dark under light load conditions, but when it re-lights, there’s little indication. 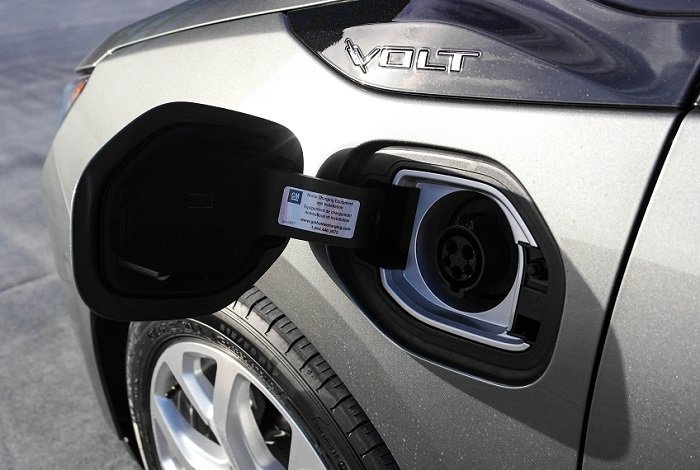 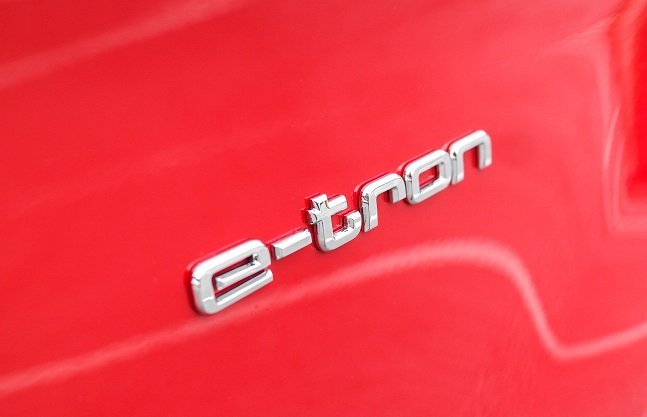 In the Volt, however, it’s quite apparent when the gasoline unit is operating. It’s a bit noisy, and goes about its business at engine speeds that are inconsistent with throttle position, which is disconcerting at first. It’s a sensation that differs even from that of a CVT, though luckily this setup avoids that transmission’s rubber-band sensation. It’s not a situation that occurs that often, however, because the battery pack and electric motors are so efficient that you’ll be operating in electric mode most of the time, even if you’re not that vigilant about keeping the Volt fully charged. And on electric power, the Chevy moves away from lights with authority; one of the few benefits for enthusiasts of this brave new electric world is the instant torque the setup provides. The numbers don’t suggest “quick car” – a zero to 60 time of 8.4 seconds won’t scintillate Corvette drivers – but in practice, it somehow feels more potent than the A3, even though the e-tron does the deed in 7.6. 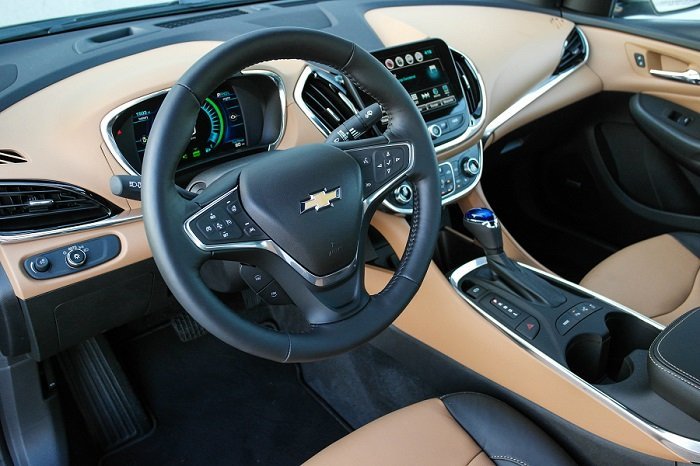 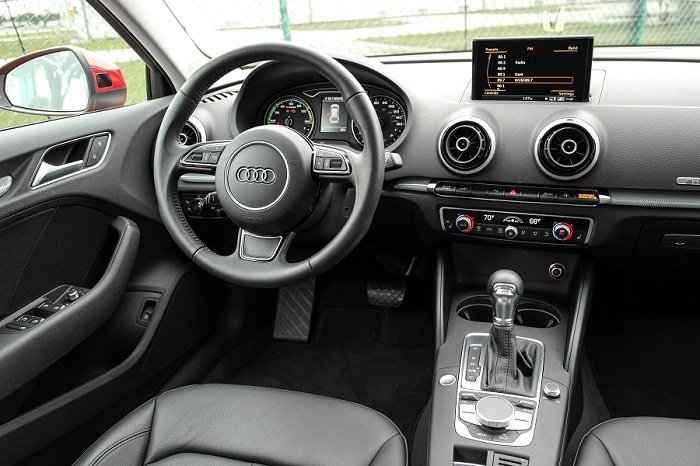 Both of these cars corner with a zeal that belies their planet-saving mien – particularly when measured against the dynamic dullard that is the Prius. This is due in part to their battery packs, which center much of the car’s mass down low, aiding a flat cornering attitude. But with narrow, efficiency-minded tires and electric steering assistance, neither of these rides is what you would call a corner-carver. Between the two of them, it’s the A3 that handles more naturally. As noted previously, it drives very much like the standard A3 sedan, which is an enjoyable car in its own right. But the Volt has a certain something going for it – it’s hard to pinpoint, but it seems like the more eager driver’s car. It’s not down to curb weight; the two weigh nearly the same, at 3,543 pounds for the Volt and 3,616 for the Audi. It could simply be all of that instant torque propelling you out of corners – in sum, it’s definitely more engaging than what you’d expect from something in the “EV” category. 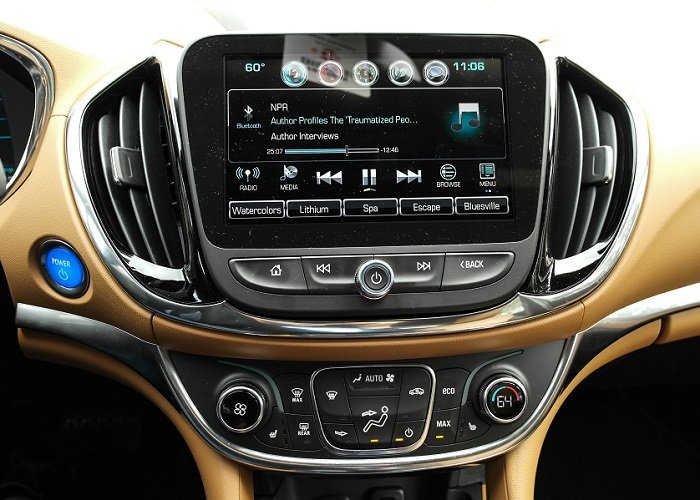 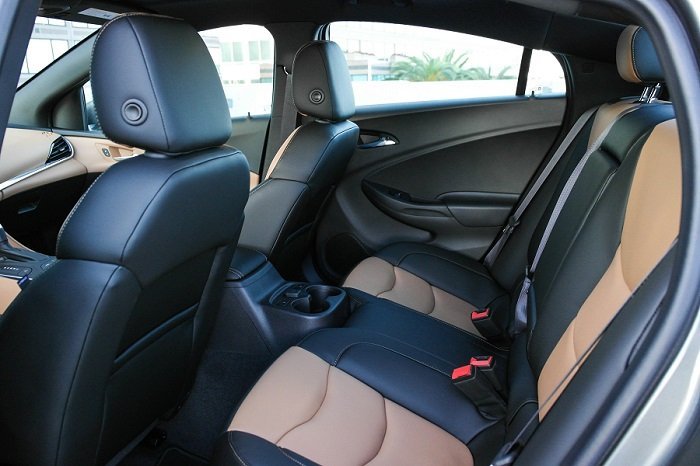 Design – particularly interior design – is perhaps the greatest area of divergence between the A3 e-tron and Volt. What seemed like a comparison of two fairly similar vehicles is now starting to take on quite a contrary voice, but truly, from behind the wheel, these two interiors could not feel more different. Though it’s got enough futuristic neon displays to pull double duty as an Epcot ride, the Volt’s dash is laid out sensibly and feels well-made. The touchscreen works well, too: it’s got a crisp display and reliably responds to intended inputs. It also integrates Apple CarPlay as standard. The new interior is a big step up over the outgoing car’s, which looked more high tech but wasn’t up to the same standard in terms of ease of use or material quality. 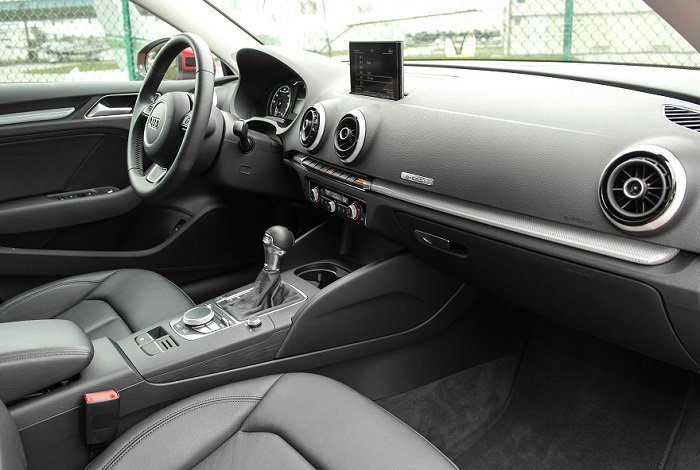 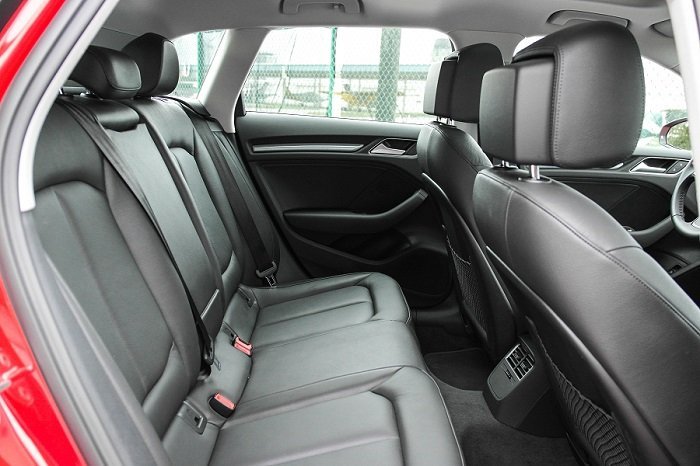 The e-tron’s cabin strays very little from other A3 models, which is to say it’s well-assembled and minimalist to the extreme. The lack of buttons initially suggests the A3 might be lacking the equipment of the Volt, but that’s not the case – particularly with our Technology Package-equipped model.  You need to search a little harder for your eco stats in the e-tron, as well – close inspection reveals a power/charge meter in place of the tach, though a digital rev counter can still be called up in the cluster’s center display screen. A battery charge indicator takes the place of the water temp gauge in the standard car, and that’s where the meaningful differences end. If you’re a fan of typical Audi cabins, you’ll find much to like in here – austere, technical design, tight tolerances and soft-touch materials. 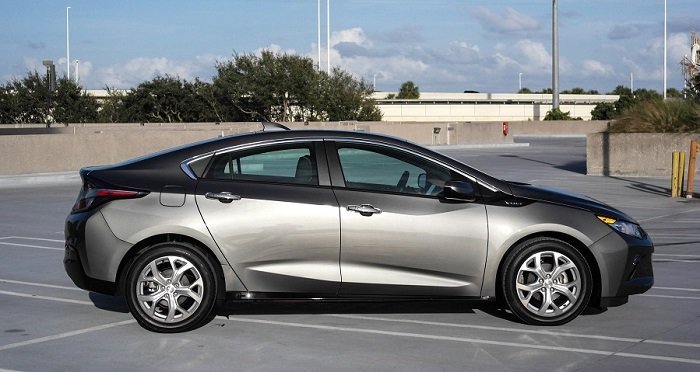 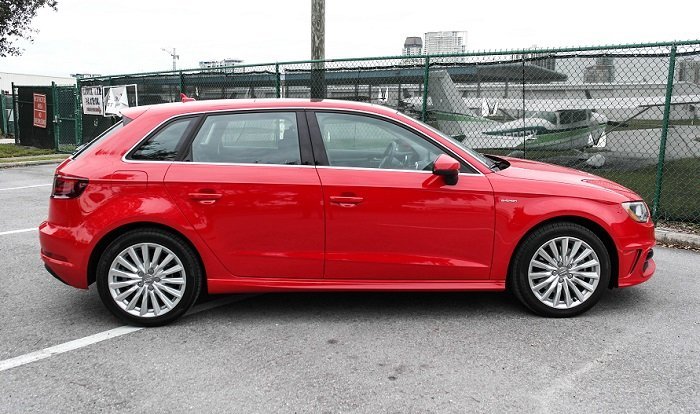 Perhaps somewhat surprisingly, both cars track very closely in price. The Volt starts at a shade under $34 grand but our well-equipped Premier model rang it at close to $40k. The Premium Plus A3 e-tron we sampled was similarly equipped and ran a sticker of $44,600. The 10% price gap is the slimmest you’ll likely see between an equivalent Audi and Chevrolet, and makes choosing a clear winner here even harder. The Audi deserves a nod just for making the transformation from competent small sedan to plug-in hybrid look so easy, and will be an easy choice for those with premium aspirations. But it’s the Volt that won my heart at the end of the day – it manages to provide a driving experience that is uniquely electric, but engaging at the same time – with some major improvements over the first-generation car. I’d call that progress, as well as a great follow-up act. 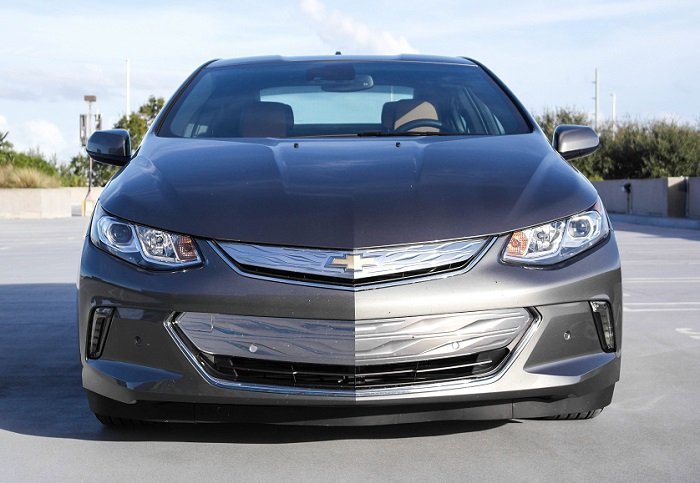 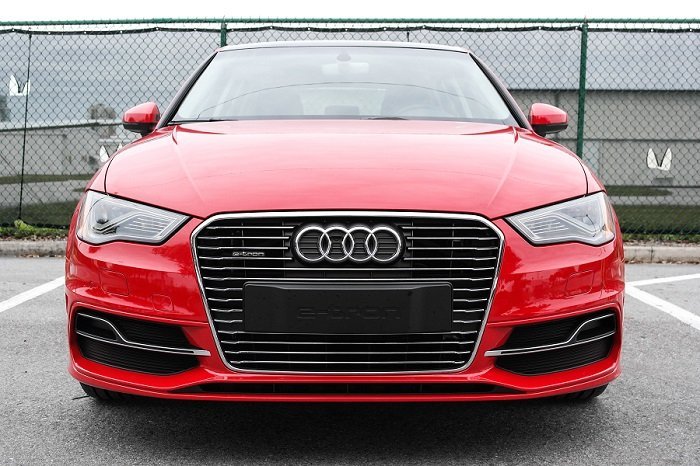