Long considered little more than a Ford Edge in fancy clothes, Lincoln has gone to painstaking levels to differentiate the latest MKX from its more plebian sister, and the result seen before you certainly looks the part. The real question is, does it stack up from a dynamic perspective, and are all of these changes enough to both set itself apart in a sea of luxury midsize crossovers, and justify a lofty $64,000 as-tested sticker? Read on to find out. 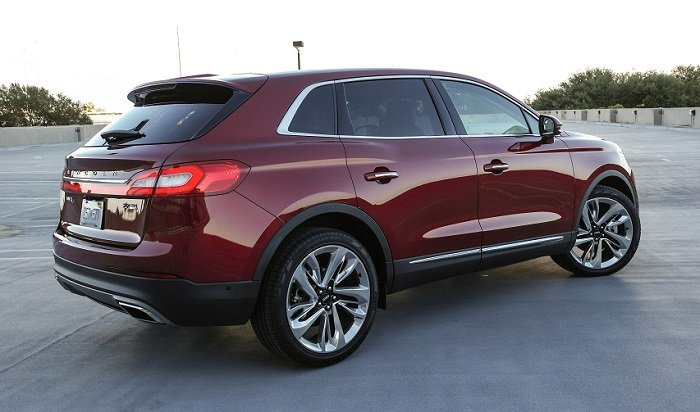 As far as crossovers go, this latest MKX is a comely shape that is easily the best implementation yet of Lincoln’s now-signature waterfall grille treatment. Moving around the car from the peeled-back look of front end, a strong hip line runs down the flanks to a racy, fastback-like cinched rear. A wrap-around rear light bar completes the look, while our tester’s 21” alloys set it off. It’s a good-looking shape, with no qualifications needed, and while the redesigned Edge that serves as this MKX’s platform mate received a similarly extensive redesign this year, the two are no longer readily identifiable as even being built by the same company, let alone sharing the same underpinnings. The Lincoln is easily the lovelier sister in this family. 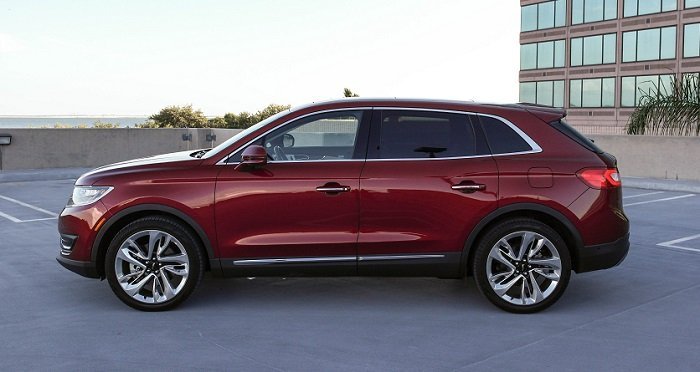 All of this helps when it comes time to stomach the MKX’s window sticker. A loaded Edge Sport, which also comes equipped with this car’s 2.7-liter EcoBoost and all-wheel drive, will knock on the door of 50 grand fully equipped – expensive in its own right. Still, an additional $14,000 is required to step up to our loaded Lincoln, and to the uninitiated, this could be seen as quite the reach – particularly when other well-known nameplates like the Lexus RX 350 and BMW X3 can be had well-optioned for similar money. The new MKX and its transitional parent brand certainly have their work cut out for them, then. 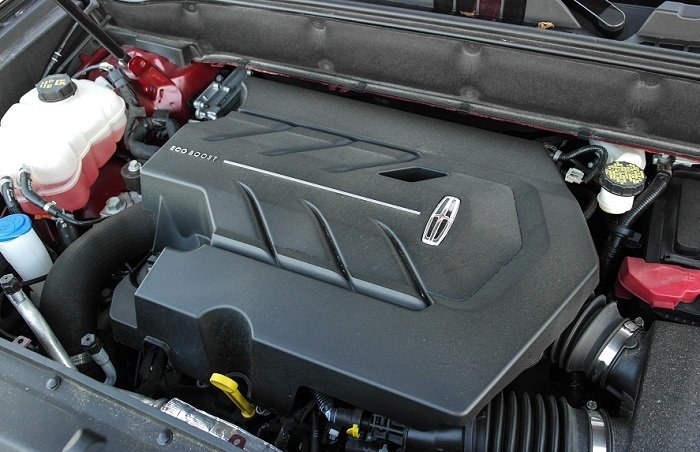 Thankfully, initial driving impressions work in the Lincoln’s favor. The 2.7L EcoBoost was a peach in the heavier F-150 XLT I sampled it in previously, and with less weight to lug around, it feels even stronger here. Gentle throttle tip-in doesn’t betray the little V6’s turbocharged roots – rather, it simply feels like a larger displacement, naturally aspirated motor. One that pumps out a healthy 380 lb-ft of torque at 3,000 RPM, mind you. In general, the EcoBoost hustles this two-plus-ton SUV around with gusto, and despite efforts to the contrary, my right foot was still able to extract a reasonable 20 MPG average out of my week of mixed city and highway driving. A smooth six-speed automatic is the only transmission available, and both the EcoBoost and the standard 3.7-liter naturally-aspirated powerplant can be optioned in either front- or all-wheel drive. 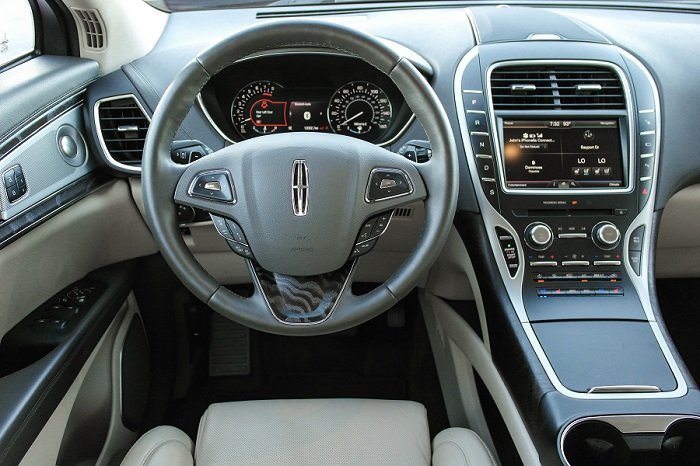 From inside the cabin, the EcoBoost comes across as less than sonorous – the overall sound is a bit agricultural, but given the MKX’s non-sporting intentions, it’s probably fine. Besides the engine, you won’t hear much of anything save for a faint wind rustle around the side mirrors at highway speeds – otherwise, interior sound levels are very hushed. This serenity, together with a pleasant design and decent materials, contributes to a level of interior ambiance that easily stands with the best in this class. Lincoln uses a mix of illuminated buttons and a well-laid-out touchscreen interface for this redesign – the improved SYNC 3 system seen elsewhere in Ford’s lineup hasn’t arrived in the MKX yet, but it can’t be far away. This combination is integrated more successfully than some competitors’ full capacitive-touch (Cadillac) or mouse-and-monitor (Lexus) setups, and push-button transmission controls aside, the whole thing is intuitive and easy to use. 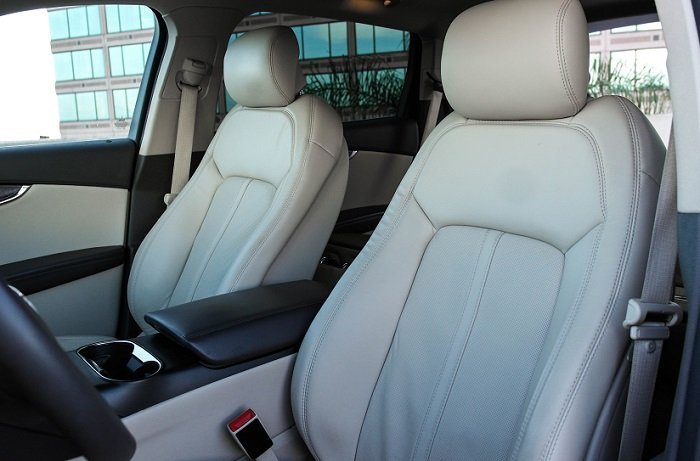 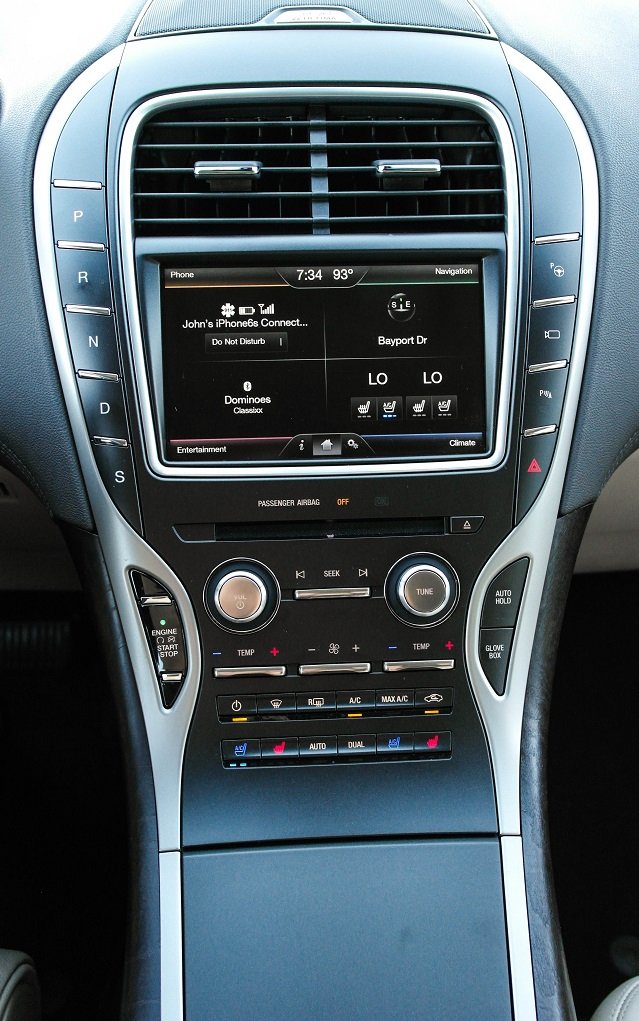 Material quality won’t blow away folks cross-shopping the Lexus or BMW, but against the rest of the class, the Lincoln more than holds its own. Though lower door card and console plastics betray those more pedestrian Ford roots, the leather quality felt a cut above most and our tester’s optional 22-way power driver’s seat offered a level of support and comfort more commonly associated with Volvo’s famed chairs. The extendable thigh support is a welcome feature for long-legged drivers like myself, and not something commonly seen outside the German manufacturers. It’s good to see Lincoln borrowing pages from proven playbooks. 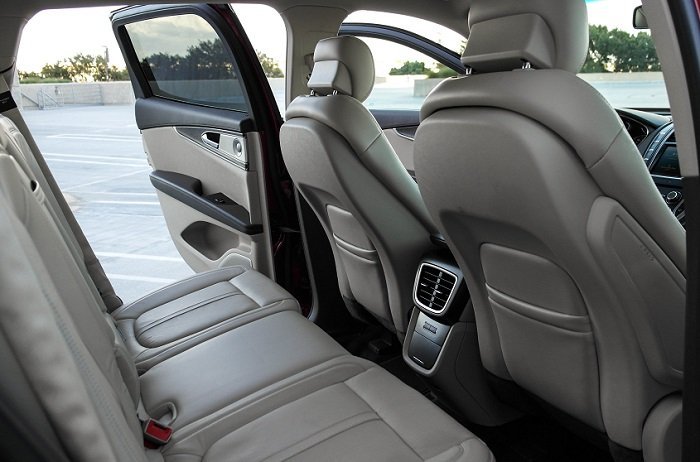 Lincoln went heavy on the MKX’s available technology offerings, and our tester carried just about all of them. The aforementioned 22-way power seat offers an Active Motion function that subtly and continuously moves various parts of the seat in order to reduce fatigue on long drives. The safety tech list is as long as one would expect at the luxurious end of the crossover spectrum, with features such as adaptive cruise control and automatic braking, lane-keeping alert and assistance, blind-spot and cross-traffic alerts, a 360-degree camera system, and more novel measures such as inflatable rear seatbelt airbags and a glovebox door airbag designed to provide passenger knee protection all on offer. 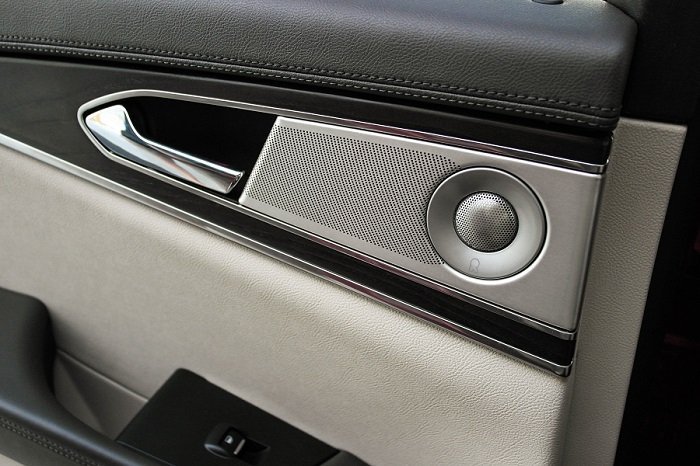 Another touted piece of technology featured heavily in Lincoln’s marketing of this car is Revel-branded “Ultima” sound system, which is bundled along with LED adaptive headlights into the $4,400 Luxury package. The 19-speaker system, which for some reason is not quoted in terms of outright wattage, provides impressive levels of volume and ultimate sound quality seems on a par with the Harman/Kardon and Mark Levinson systems sampled elsewhere…the outright best systems I’ve heard in the segment remain the B&O and Burmester systems available, respectively, in the Audi Q5 and Porsche Macan – but the Revel is a good first effort.

Though the pricing may seem ambitious, the MKX’s a la carte pricing structure means you can spend pretty much whatever you want to spend. My money would certainly go toward the excellent 2.7-liter EcoBoost and the handsome 21” alloys of our tester, as well as the technology and safety packages and the fantastically comfortable 22-way driver’s seat. Finally, I might spring for “just” the 13-speaker Revel sound system rather than the 19-speaker Ultima of our tester, since my non-audiophile ears probably couldn’t tell the difference, anyway. The rest of it, I could take or leave, and the resulting sticker price in the low-to-mid-$50’s would be much more easily justified. The upshot: with more efforts like this, it’ll be hard to label Lincolns just gussied-up Fords for much longer.

A handsome, viable alternative to the Lexus RX, BMW X3 and Cadillac XT5…just keep an eye on the option sheet.